This is a lot that fits seamlessly into sunset valley. It does not look awkward placed into the hood as there is an intended place for it, that works perfectly.

This park was once just a small meeting area between a few houses in Sunset Valley. The people who lived in the houses took care of it and had parties there, but a few of them eventually moved away and the park fell into disrepair. 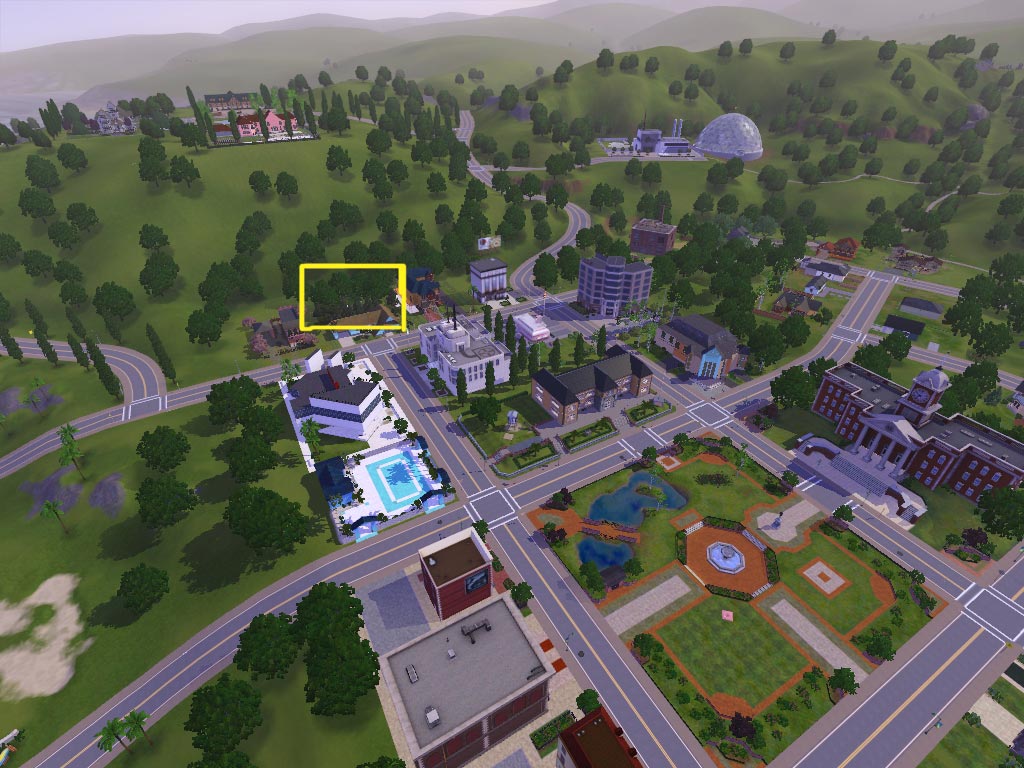 Plants have become overgrown, wood has begun to rot, and metal to rust. The dumpster, uncollected for years, sits behind a ton of plant growth which has grown under and on the trellis which makes up the center of the park. 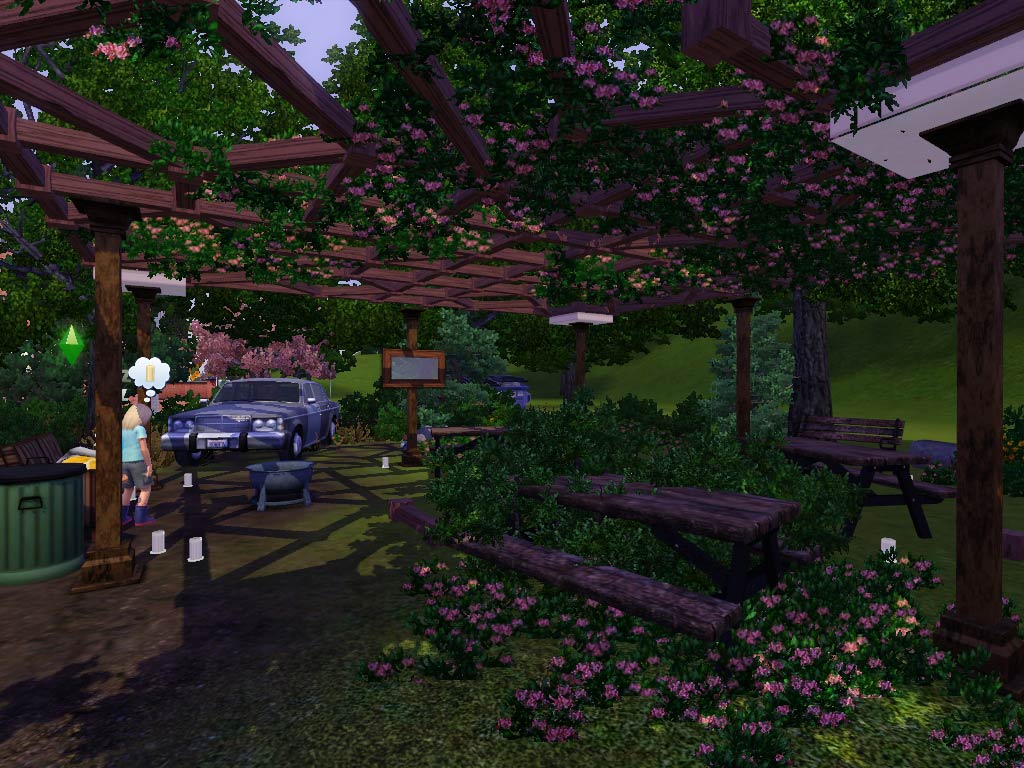 There's an abandoned couch, some candles, old picnic tables, a found-and-tacked-up mirror, and an old, dangerous slide. Little more in the way of amenities. At least the trees and overgrown heather on the trellis gives a bit of shelter. There's an old car, too, but the seats have springs in them, which have poked through the rotting upholstery, so it's no good for sleeping in. 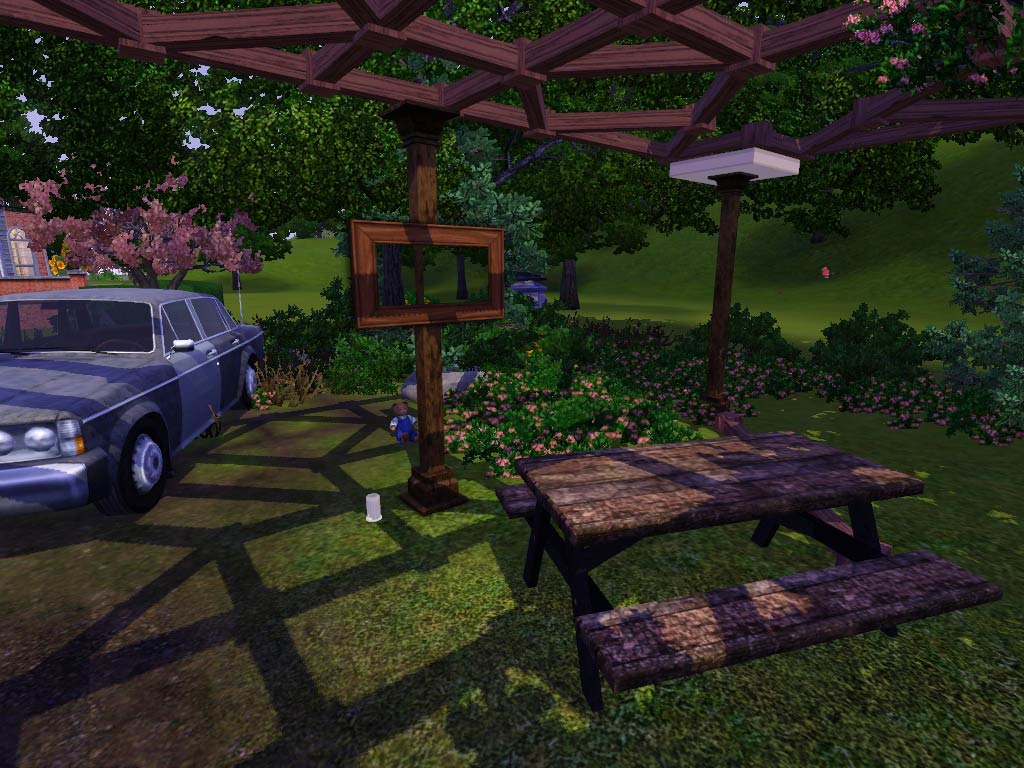 Your homeless sims may have a hard life, but at least it's a little easier when there's plantlife to use as shelter, right? The people in the neighboring houses don't seem to mind, as long as their view is blocked by the trees. Let's just hope whoever lives here manages well enough. 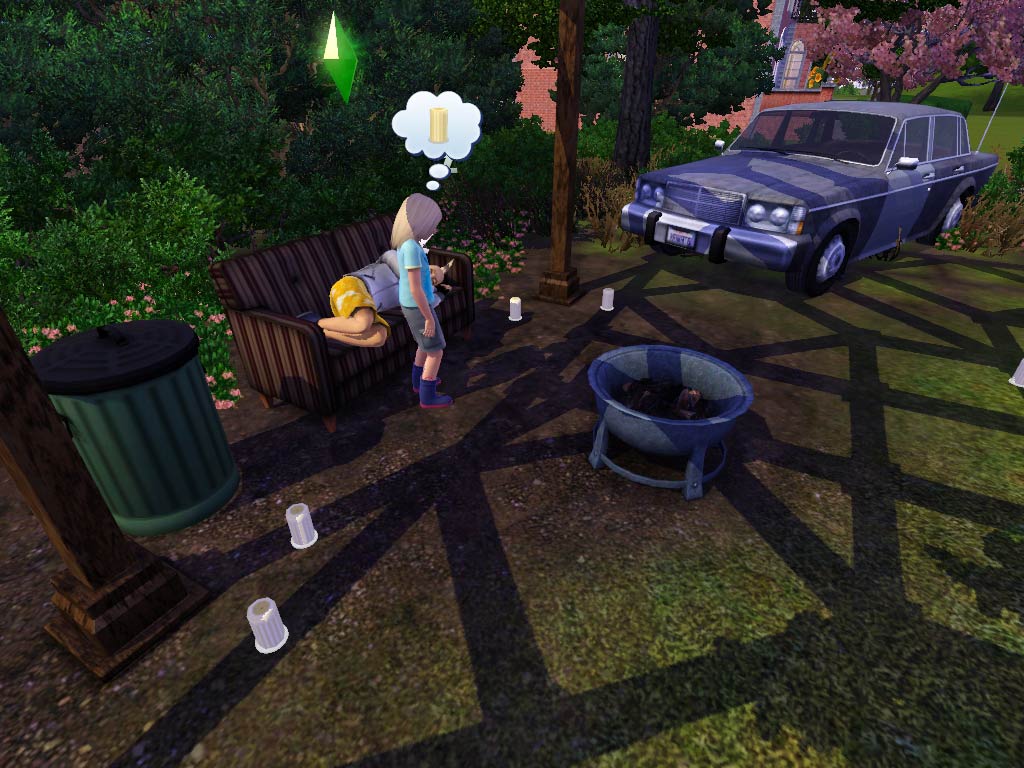 Home is 30x20, and costs 15,258 simoleons. It depreciates REALLY fast, so move a sim in right after placing it! It will cost more if placed on a lot bigger than 30x20.

I feel bad saying "Enjoy!" considering it's a home for unfortunate sims, but really, enjoy. I quite like how this came out.

Built with Game Version: 1.10/2.5/3
Key: - File was updated after upload was posted
Need help with downloading or installing content? Click this link!
Don't forget to Thank the creator after downloading! Use the Thanks button located above the screenshots above.
Quick Guide:

wow... really great... any CC used? how did you overlay the plants and the bench? moveobjects on?
uzi666

this is really great, i love playing homeless sims and making their lil dens

wow! this was done really well,

Yay! Thank you for this.
No, u can't haz cheezburger
crazzyferret
Field Researcher
#7

Does the game let you install things that require it if you dont have it? I believe the WA content on this lot is the benches, and if you can install it they'll probably just be missing.

Dont do it if you dont know it will work though.
Esmeralda

WHOA!... I can't imagine how anything like this came to you, but it is simply... genial. BRAVO!
Simmiller

This message has been deleted by georgie.debs.
georgie.debs
Test Subject
#12

Love the lot! But how are you supposed to know there are homeless sims in the neighborhood? And what do you mean by "depreciates"? Will definitely download though!
Claeric

Homeless sims are townies who do not actually have a lot in the neighborhood.

This lot is for YOUR homeless sims. Some people make a challenge out of playing sims who do not have any amenities at their home.

Depreciation means the cost goes down because the value drops. The things on the lot are not worth much so if you place the lot and wait a few days the price goes down over 2,000 simoleons.
Nyn

lol this is a great lot!! I love the idea

This is beautiful! The trellis is inspired and for a home that is supposed to be for homeless people, it is very beautiful. Thank you so much!
Nintendork Island | Please call me WWW!| Despite what avatar says, loves all of mts <3

I love this! Another download for my collection, thanks.
gelallite
Test Subject

This is actually beautiful. I love things for unfortunate sims. I think the game needs more. How did you make the trellace?
Claeric

The trellis is just fencing and columns.
gelallite
Test Subject

really? wow. I really love this lot. I have lots for my homeless sims, but this one is gorgous and I love the story that goes with it!
crazycat92
Test Subject
#20

Wow, can i just say, that is an amazing idea, that i would never have thought of, but will not be using A LOT.
Very nice plot, i keep trying to make "homeless" plots but i start to feel sorry for my sims and cant resist giving them extra stuff :P
This lot has all the basics and i will have to tell myself to add NOTHING to it
lol
thanks

I have been trying to create a scrapyard/rubbish dump for my homeless sims, I really like taking the shinyness out of the game. Everything is too postcard perfect in the Sims, nice to see your adding a bit of dirt.
simdebster

I love it, but what caused me to chuckle was the unfurnished price.
Have a bright platinum diamond day!
Deb