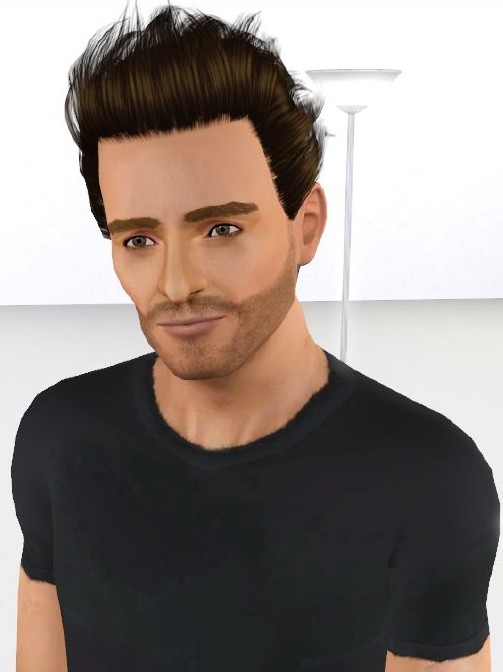 This is my version of Hugh Jackman and some informations about him:

Hugh Michael Jackman (born 12 October 1968) is an Australian actor and producer who is involved in film, musical theatre and television.
Jackman has won international recognition for his roles in major films, notably as action/superhero, period and romance characters. He is well known from his role as Wolverine in the X-Men series, in addition to his leads in Kate & Leopold, Van Helsing, The Prestige, and Australia. Jackman is a singer, dancer, and actor in stage musicals, and won a Tony Award for his role in The Boy from Oz.
In November 2008, Open Salon named Hugh Jackman one of the sexiest men alive. Later that same month, People magazine named Jackman "Sexiest Man Alive."
A three-time host of the Tony Awards, winning an Emmy for one of these appearances, Jackman also hosted the 81st Academy Awards on February 22, 2009.


Eyeliners and eyebrows: by me (in separateds files).

***NOTE:*** For that Hugh will be exactly like this in your game, you must have some kind of slider hack installed. I’d use:

PLEASE NOTE: to install, put him in the saved sims folder in Documents - Electronic Arts - Sims 3 - Saved Sims and the other things, into package folder. He will then appear in your sim bin.
If you don't wish to download all these things, your game will replace them with whatever you have.

Thank you very much to all creators listed above for their wonderful work.

Back to download view
14 Comments / Replies (Who?) - 12 Feedback Posts, 1 Thanks Posts
Hide Thanks Posts for this thread (Show only feedback)
Nyn

Very good likeness... he'll be nice having around the neighborhood

Congrats on getting him accepted!
Late dawns and early sunsets just like my favorite scenes
Then holding hands and life was perfect just like up on the screen

Nice work, i guess the women will love you for that.
-> My "Vampire The Masquerade: Bloodlines" Sims: > CLICK <
-> "My Fav music" playlist: >> Listen <<
-> Liquid Drum & Bass at it's best: > Liquicity <
-> Swiss Groove - the world's grooviest webradio! Music which moves your body & soul: > SwissGroove Website <
suzetter

Thank you everyone!
I couldn't make him without your help!
My Yearbook
Audrey

Great work, as usual Monca! You should let Oprah know. She loves him to bits. Lol.
I feel honoured, a Spanish magazine wants to feature my Desperate Housewives and Will Smith in their feature on celebrity sims.
JAKINCOL