by ChristineKero Posted 7th Jun 2010 at 11:25 PM - Updated 15th Jun 2010 at 7:35 PM by ChristineKero
27 Comments / replies (Who?) - 24 Feedback Posts, 1 Thanks Posts
This is a new mesh recolour, and means that you will need to download the particular mesh itself in order for this to show up in your game. See the Meshes Needed section or read the text for more information.
Picked Upload! This is a picked upload! It showcases some of the best talent and creativity available on MTS and in the community.

I fixed the texture file now! Now it works!

This is a beautiful gown with very detailed ivy vines bedded with rhinestones. It's great for that evening we're all eyes is on you, envying your dress. 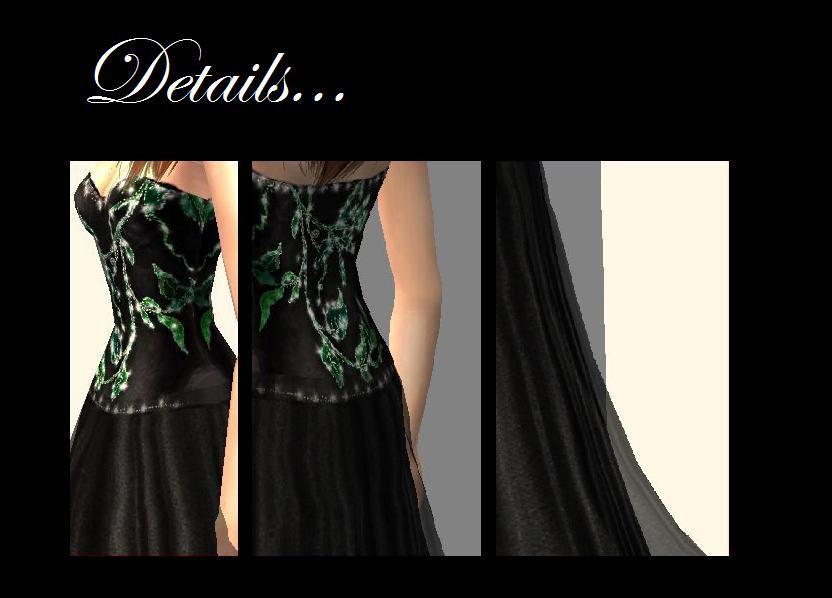 The Mesh is made by Lidiqnata, this is the link : http://lidiqnatathesims2.webs.com/afmeshes.htm

The Hair is a free hair from http://www.coolsims.net/

Back to download view
27 Comments / Replies (Who?) - 25 Feedback Posts, 1 Thanks Posts
Thanks are currently OFF: Show Thanks Posts for this thread
Page 1 of 2
whitewaterwood

This is soooo going on my Narcissa Malfoy sim right away! Thank you!

beautiful! really beautiful!
The end of magical Pegasaus's era through the world of sims
ChristineKero

This is really gorgeous. Thanks for sharing

The dress won't show up in game. Do you know why?
ChristineKero

Quote:
Did you download the required mesh as well?
Let's conspire to ignite, all the souls that would die just to feel alive.
IObelle
Test Subject
#12

Yes, I downloaded the mesh. And I have it where it should be.(I'm used to download things for ts2.) There is nothing showing up. If the mesh was missing, the dress would show up as an original dress from the game. I have all expansion packs, exept Uni and AL, and no stuff packs. Maybe there is a expansion or stuff pack requed that I don't have? That you don't know is needed?
ChristineKero

Quote:
Yes i'm sorry if that's the case. but i dont know waht to do about it

Let's conspire to ignite, all the souls that would die just to feel alive.
Toadychan

So pretty! Thank you very much for this.
magicklovah

The same thing is happening to me. I download the dress, and the mesh, as well a few other things from the mesh site. I have no idea why it won't work.

Can you tell me what expansions you have, so maybe i can figure out what the dress requires?

Let's conspire to ignite, all the souls that would die just to feel alive.
IObelle
Test Subject
#17

The mesh and some kind of base texture shows up. It's just your texture that's not shows up. Can a texture require a expansion or stuff pack? Maybe you just chosed the wrong file and thought that was the texture? The texture file should be in the folder called SavedSims, after you exported it in bodyshop. If it is wrong file it won't work in anyones game. If it works in your game, it's because you have right file in SavedSims. If the texture requires a expansion, I think you can fix it in SimPE so it works with basegame. (I wan't your texture in game, because it's lovely!)
ChristineKero

I modefied a texture from nightlife and pasted it on the dress..so it must be required to have nightlife maybe? i'll change
Let's conspire to ignite, all the souls that would die just to feel alive.
lidiqnata

ChristineKero the problem is not the mesh-it's base game capable. Your texture is not requiring EP it's just not working because you didn't upload ir from your "SavedSims" folder. You probably took it from projects folder. You dress must be named something like this - d08f7884_LayeredIvyLeaves, if you haven't edited it in SimPE

Stuff for The Sims 2
ChristineKero

I fixed the file now!

Let's conspire to ignite, all the souls that would die just to feel alive.
IObelle
Test Subject
#21

This dress is gorgeous!
JAbervamp

You uploaded it! Great work! It seems as though everyone loves it!
ENTJ
Yavannah

That link to Lidiqnata's mesh doesn't work. So could you fix the link or put the mesh here, thank you.
The dress is beautiful, I like it very much.