by emhpb Posted 3rd Aug 2010 at 2:58 AM - Updated 3rd Aug 2010 at 2:49 PM by emhpb
21 Comments / replies (Who?) - 16 Feedback Posts, 5 Thanks Posts
This is a new mesh, and means that it's a brand new self contained object that usually does not require a specific Expansion pack (although this is possible depending on the type). It may have Recolours hosted on MTS - check below the description for more information.
Hi MTS! This upload has given me so much trouble, I'm quite glad to be done with it- for the moment anyway.

When I saw Lucia Carlota's Victoria's Secret Fashion Show Wings, I simply had to convert them. Being a little out of touch with the CC world, I was unaware that no alpha accessories had previously been made, and attempted anyway. Lo and behold, it worked! A week of troubleshooting later, I present to you, alpha wingies~!

Each pair is unisex, for teen through elder, and is found under ring accessories.

Shown here are the wings with the original textures as overlays. Each pair also has an option to be recolored in CAS as well, in the second design. attached is a really ugly but informative picture which shows the recolor channels. They all have 2 channels, except for the peacock ones, which have a third. (it's cyan, and barely visible in the pic)

Unfortunately, there are some texture issues which me and my team of highly trained specialists have been unable to fix. (in all seriousness, I do not have such a team, but I did consult some people who are very good at this sort of thing, who tried everything and were completely stumped)

The texture problems are as follows:

1.) The detailed textures get exceptionally blurry when the wings are worn with another accessory. I am told this always happens, with basegame accessories as well. The theory is that this happens so the game doesn't have to render high-poly sims (aka sims with multiple accessories) and detailed textures at the same time. However, it happens with socks too, so idk.

2.) There is an unexplainable black diamond behind the sim's disembodied head when directing the sim to take an action. This is the transparency going BYE-BYE I suppose.

Here's a lovely illustrative picture of both problems. Furthermore, the transparency did not work on the lesser 2 lods, no matter what I did to them they became black squares, so they have been disabled. (I know I'm getting technical here, sorry if you don't understand this, it just means that the wings disappear at a certain distance)

However, if your graphics are pretty decent, and your sim detail is set on high, it's quite far before they disappear. With lower sim detail settings/poorer graphics, the wings disappear very quickly. I tested on my computer, which is okay for graphics, and took these pictures of the farthest distance I can zoom in normal camera mode at each sim detail level: 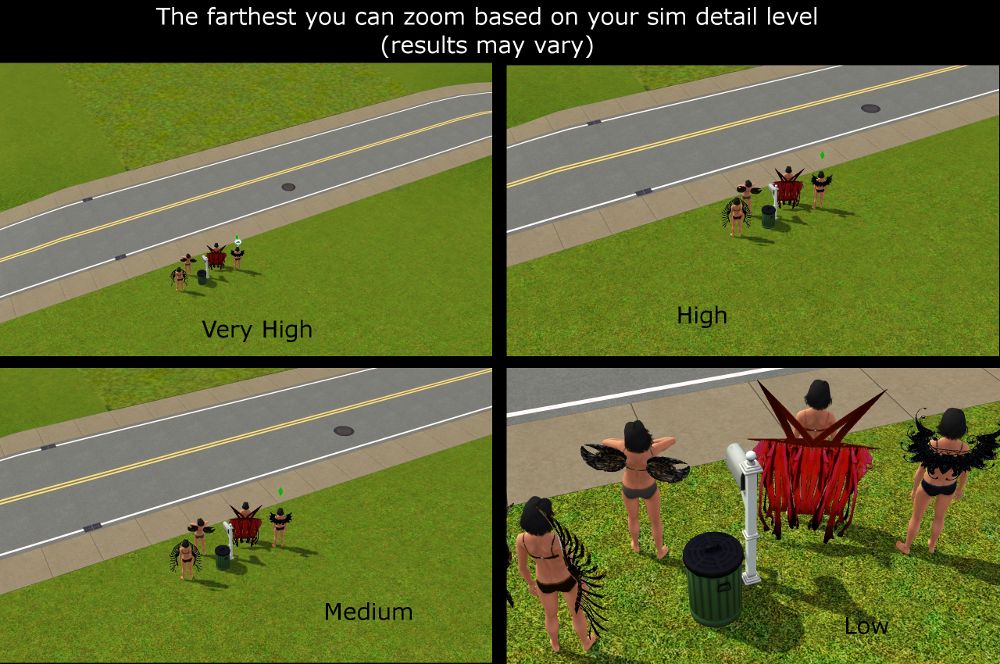 There are ways to get around the game's draw distance of course, namely using a camera hack which mods that sort of thing, and using tabbed camera mode (which will give you much more room to zoom haha) Also, a tester reported a much farther distance than the one I observed at high sim detail, so it's possible that better machines will let you zoom more and so on.

Now on to the real beauty of these wings of course is that they can be retextured to any shape, as long as it fit's the mesh. However, my normal policy does not apply here, as both the mesh and the textures are conversions. Click the spolier for details.

Sharing
-Do NOT share without a link to the original, and do not claim them as your own work.
-No paysites, no exchange.
-Please ask me before doing age conversions/any other conversions

Recolors using the custom textures from the packages
-Please refrain, unless you have permission from Lucia Carlota Please also credit Lord Dragonstone from Sapphire Sims 2 for the mesh.

Recolors using your own textures
-Please do so! I'd love to see more pretty recolors of different types of wings! Credit Lord Dragonstone from Sapphire Sims 2 for the mesh. Also, use the file from the tutorial, not the one in the download, as it's updated to work better for males

How to recolor/make your own alpha accessories?
-I have made a tutorial which currently only covers recoloring: CLICK
-If you can't wait for a tutorial on making your own, and you have experience with TS3 meshes, textures, milkshape and TSRW/S3PE, pm me on more informationl.
-Do not pm me if you do not fit the description I just gave. Read another, more basic tutorial, I will not teach you how to make meshes at a beginner level.

Additional Credits:
Orignal TS3 CC: Lucia Carlota's Victoria's Secret Fashion Show Wings and Lord Dragonstone's large Alpha Wings Mesh
Testers: Grilledcheesesammich, RezDelnava
CC used in screenshots: Kanno's Moonlight Skin (bodies), aikea-guinea's default replacement skin (faces) The Ninth Wave's CAS bluescreen
Additonal Credits: Rez Delnava for doing testing and troubleshooting for me, as well as Base1980 for helping me out! Thank you guys so much for your help, and for trying so hard to fix my problems! Also, I would like to thank the people in #create for listening to me moan and groan and whine that IT'S JUST NOT WORKING and giving me advice.

If you need more info, see:
Back to download view
21 Comments / Replies (Who?) - 15 Feedback Posts, 5 Thanks Posts
Hide Thanks Posts for this thread (Show only feedback)
Arisuka

WHOA, now I really got to do some fantasy creating! Thanks for posting, great conversions!

Thanks Arisuka! I kinda went wild with the wings, so there are some more I mght upload :D
grillcheesesammich
Field Researcher
#4

Redbull is so jealous! <3 congrats.
ninotchka

Regardless of the texture problems, they look fantastic!

Amazing, thank you so much!!!
Robodl95

These are fantastic! Would it be okay to convert the mesh for children/toddlers?
Hi I'm Paul!
emhpb

Actually, I think Lord Dragonstone or someone else on Sapphire Sims 2 has a sims 2 children's mesh, but then you would have to make undersides and assign bones, so it would probably be easier to use my conversion and just make it smaller

Be sure to credit the original mesh creator, me, and Lucia Carlota if you use the textures. (not necessary if you make your own)

Let me know if you do, and I can link to the conversion in this upload.

I would love to use it in my future wings uploads too, if it's okay

Alpha Editable stuff is so much fun, the possibilities are endless!
Hi I'm Paul!
Dramatic-Gamer

It was impossible. Until I did it.

Actually, until bloom did it. xD
silvertora

Great, I was watching this in Creator Feedback and am so pleased that the alpha editing was a success - this now opens all sorts of new possibilities! Nice work!
EAchallengeeverything

Good job making the wings! As Silvertora said, we need someone to make us tails. I also want vampire teeth with a small strand of blood down the chin. Does anybody know how I can get that? Or a website to get it on?
I do not own EA Challenge Everything. It is not mine. EA owns it.
silvertora

You can get the vampire "fangs" here : http://jill-the-ripper.dreamwidth.org/16187.html or http://club-crimsyn.dreamwidth.org/13759.html - there are other places - but you might need to download the vampire sims on here - I think they also come with the blood on the face option under masks - do a search on here under sims for "Children of Darkness: A twisted vampire couple" - the girl vampire has the blood on face masking - Hope this helps - Silver
Heironicia
Test Subject
THANKS POST
#16

This is amazing!! Before my internet went out i was looking high and lo for sims wings! And these look so great!
AnnabelCrazy
Banned
THANKS POST
#17

This is what i need now i can cosplay my sims,Thank you so much!! :D
V12creator

I saw you take request for wings ( sory if anoying you or not taking anymore..) can you make an werewolf skin for sims3?
V12creator

This is about the fourth set of wings I`ve found here today. I`ll ::nab: `em and give `em a try.