The County view_ A European retreat 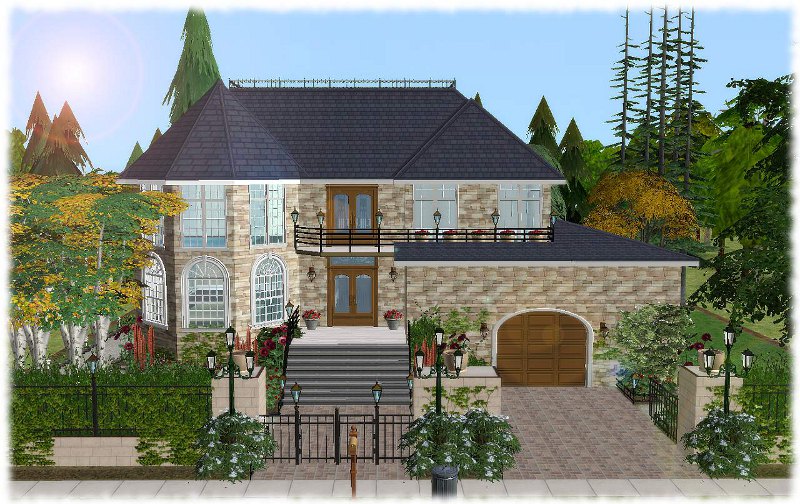 This house comes completely unfurnished except for the built-in-closets, the alarms, the outside lamps and some decorative items.

This European style house, nestled in a forest is based on this house.

It features 3 bedrooms, 2 1/2 bathrooms, a study, a large livingroom and a kitchen that opens up onto a dining area that can sit 8 persons.

On the second floor, the master bedroom is connected to the master bathroom by a walk-in-closet. The Family bathroom opens up onto the hallway and each one of them has space for his-and-hers sinks, a shower and a tub. The two other bedrooms already have built-in-closets.

The garden is heavily landscaped and at the back of the house there is a little pond for fishing circled by pine trees that blends well within the nature around and the neighbourhood.

Bushes and plants were placed using the cheat codes "moveobjects on" , "boolProp allow45DegreeAngleOfRotation true" and "boolProp snapObjectsToGrid false" ; so I recommend having a garden hack if you don't want your gardener to go crazy.
You can use the "Perfect Plants" by Simbology.

It tried to reproduce the house as acurately as I could and wanted it to be as realistic as it could be which is why I used so many custom contents. Believe me when I say that I tried to reduce the amount of CC as much as possible. Fortunately, I could include most of them in the .sims2pack but you still have to download some of them by yourselves.


¤ Custom Contents Required but Not Included ¤

Be careful : this item is a slave to the Georgian Shuttered window. You will need to have it in your game for the Arch window to show up correctly.

¤ Custom Contents Recommended but Not Included ¤

(Please excuse me if I made some mistakes ; English is not my native language.)


Don't forget to push the "thanks" button !

Back to download view
5 Comments / Replies (Who?) - 2 Feedback Posts, 1 Thanks Posts
Hide Thanks Posts for this thread (Show only feedback)
Guardgian

I absolutly LOVE this house ! Thank you so much for sharing

It's a lovely, appealing home which will provide hours of fun decorating, so thanks!
Cocoli

Thank you very much for downloading this house and for leaving a little comment. I am glad that you like it and I hope that you will enjoy furnishing and playing with it. ^^

This house is gorgeous. For some light constructive criticism, (but perhaps just my personal preference) the rooms are kind of large. I'm not sure what I'm going to put in all that bathroom space. But I'd rather have more space rather than not enough, so thank you very much for sharing!