by iCad Posted 5th Dec 2010 at 2:42 PM
18 Comments / replies (Who?) - 5 Feedback Posts, 13 Thanks Posts
Picked Upload! This is a picked upload! It showcases some of the best talent and creativity available on MTS and in the community.
If the Standard American Suburban look is your dream...here it is: 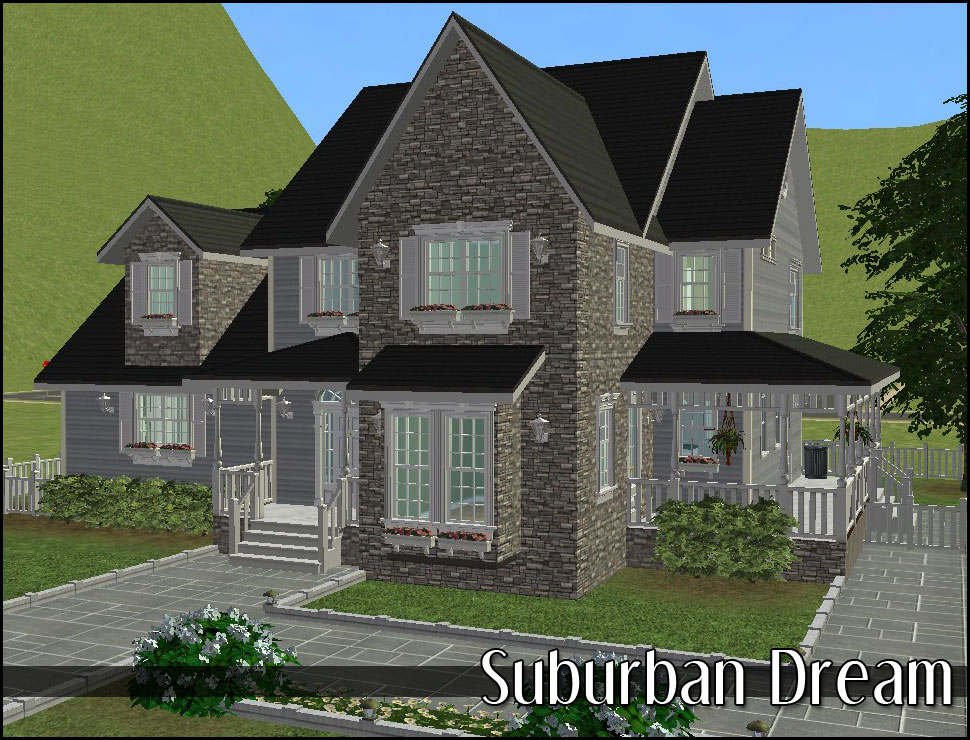 It has all the elements: Boxy, "modular" shape, mixed-media exterior, wrap-around side porch, varied-pitch rooflines, and perhaps a severe case of flowerbox abuse. (Hey, I LIKE flowerboxes!

On the other hand, if the Standard American Suburban look is your nightmare...here it is.

But whether it's a dream or a nightmare, this is actually a nicely playable little house. Or not-so-little, really. Although the footprint is rather small, sitting on a 3x3 lot with plenty of room left over, it has a surprising amount of open, sunny interior space. 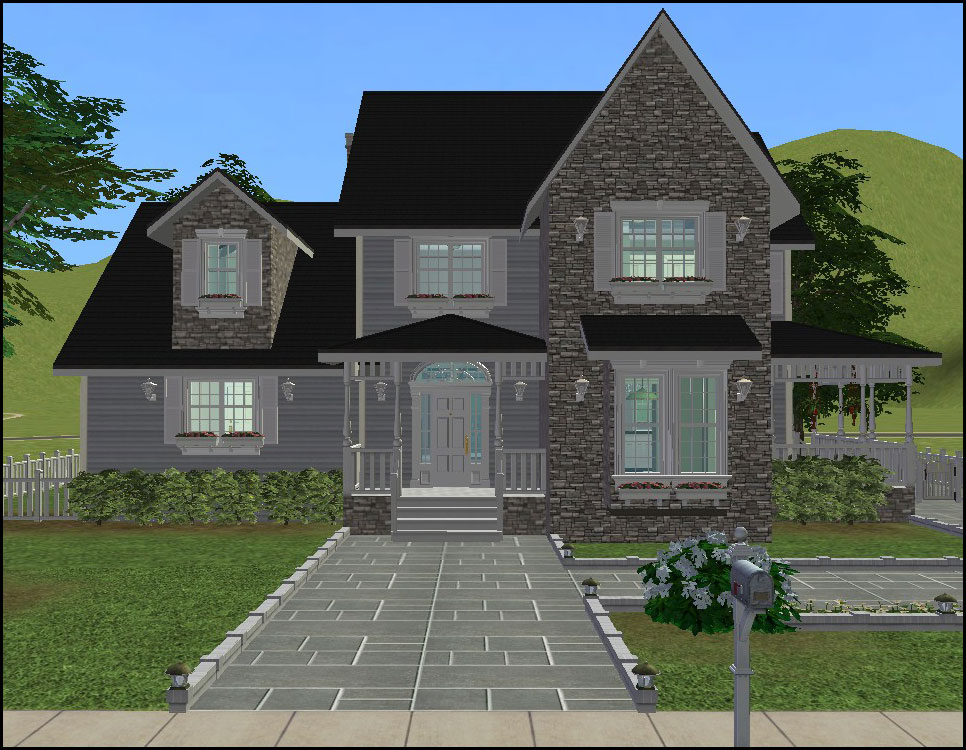 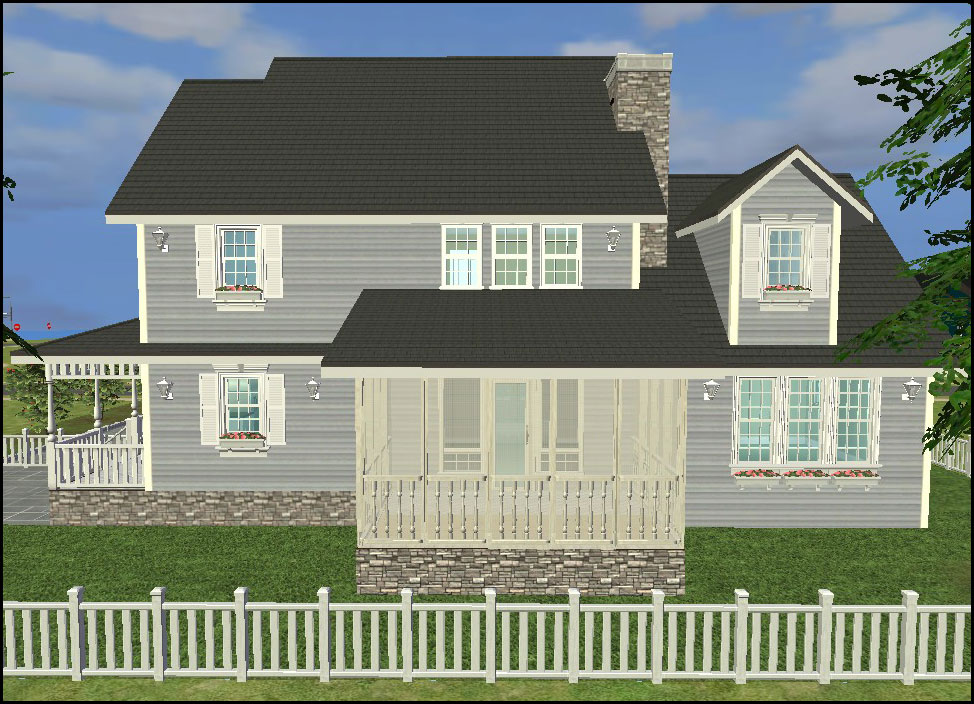 The two-story foyer feeds into a horizontal gallery-style hall, nice for displaying artwork. To the left is a powder room and the entrance to the master suite, which occupies its own wing and is nicely-appointed with a large private bath that features a separate shower and bathtub and a dual vanity. Straight ahead, through an arch, is a nicely-sized living room with a fireplace, one full-stone wall, and niches ready for "built-in" bookshelves: 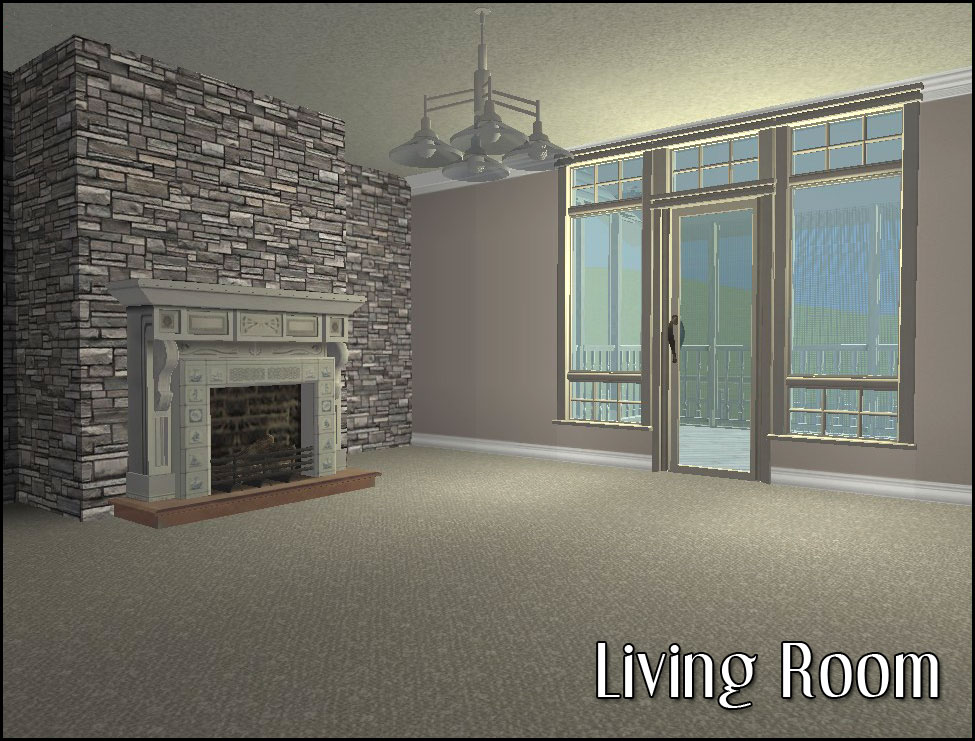 To the right is the kitchen, which can be accessed either from the living room, via a nook, or the gallery hall. The kitchen is flanked by a roomy formal dining room with wood flooring and a bayed window (a nice spot for a window seat) as well as an informal eating nook with a two-seat snack bar:

Upstairs, there are three more bedrooms, one of which is very big and would make a nice game room, play room, or media room if a 4th bedroom isn't needed. There's a balcony overlook into the foyer, a nice spot for a chess table or for a collection of potted plants. The two smaller upstairs bedrooms share a jack-and-jill style bathroom that can also be accessed from the hall.

The house also features nice outdoor living/recreation areas. The small front porch is covered. The side porch is also covered, comes with a couple of hanging plants, and it wraps around the kitchen. It can be accessed from either the dining room or the nook, and it steps down to a small, paved patio. The highlight, though, is the roomy 3-season screen porch on the back of the house, which is accessed from the living room.

The back yard is fully fenced and has room to add whatever you'd like, even a pool if you're into pools. (I'm not.

) There is a driveway that has parking for two cars. There is fairly minimal, low-maintenance landscaping in front, with plenty of space to add more if that's your thing. The exterior is also nicely lit all around.

1) Like most of my lots, this one comes with all counters/fixtures/appliances in place in the kitchen and baths, a phone, and at least one light fixture in each room. THERE IS NO OTHER FURNISHING. Because I'm bad at interior decorating, I'm afraid. You will do far better with that than I. Trust me.

2) Except for an invisible driveway recolor (Unless you LIKE the ugly concrete driveway/extension piece), you shouldn't have to download anything for this lot to show as it should. Both master objects for the Georgian windows/doors are included here. However, if you already have Phoenix_Phaerie's Georgian windows and doors in your game, you might want to pick those out of the CC list when you install this because you don't need to have them twice.

3) HOWEVER, in order for the flowerboxes to be white, you need a white recolor of the Maxis country window because plasticbox's modular flowerbox picks up the box texture from the Maxis window and any recolors of it that you have. I've included plasticbox's recolor as a separate file in the rar file but NOT in the package. If you don't already have a white recolor of the Maxis "Country Window," you'll want to separately copy that file to your Downloads folder. Otherwise, the flowerboxes will be oak-colored and won't match the windows. I'm actually not sure if you'll have to manually recolor them or if they'll show as white automatically once you have a window recolor in your game.

4) The CC ash tree included is NOT Seasons-enabled, so it won't drop leaves and turn color in the fall, and snow won't sit on it in the winter. This doesn't bother me at all, but if it will bother you, by all means change it out or delete that file from the package before you install the lot. I like that tree because it's realistic-looking and TALL, nicely in scale with this 2-story house.

5) The white-trimmed roofs are not CC. I have default-replaced my Maxis roofs using Phaenoh's mod. If you haven't/don't want to replace your roofs, this lot will have standard grey roof trim, and it won't look nearly so nice. So do yourself a favor and replace your roofs!

And...I think that's it! I hope that you will find this lot useful. I use it often, myself.

Back to download view
18 Comments / Replies (Who?) - 4 Feedback Posts, 13 Thanks Posts
Hide Thanks Posts for this thread (Show only feedback)
LadyAngel

Wow, that is a nice house! I'll be using this real soon. Thanks!
shellybeans2
Test Subject
THANKS POST

Really cute place. I have the perfect newly engaged couple to move into it. They thank you. : )
thevintagesim

all of your homes are soooo lovely iCad!
The Vintage Sim
jrb2037
Lab Assistant
THANKS POST
#6

Thank you for your hard work as always! Fabulous - can't wait to use it.
Lavaster
Top Secret Researcher
THANKS POST

I love the interior! And the grayness reminds me of a house in a movie, yet it feels so home-ly and warm. Thank you! Just my style!
iibeccax

I LOVE THIS HOUSE <3 i wanna download it but i cant, i need to get pets O; :D
sarah*rose
Forum Resident
THANKS POST

LOVE it!! The layout is nice, too. *favourites*
EmilyMarie
Test Subject
THANKS POST
#10

I love this house! Thanks for making it so that it's actually realistic for my sims to buy without using a cheat.
Snarebear
Test Subject
THANKS POST
#11

I love it! I don't even have Pets, but I went ahead anyone to download this, and I'm so glad. You make lovely, lovely houses! ♥
Killerkaty87
Test Subject
THANKS POST
#13

This is gorgeous! I absolutely love the design and the exterior is fabulous.
Pomerani
Lab Assistant
THANKS POST
#14

Aah, that house is so cosy and cute

How On Earth Do I Download Rar.Files ? I Love This House To Death In The Pictures, I Want To Download It So Bad But When Ever I Download Rar. Files It Takes Me To a Internet Page That Dosent Work ..... Help ?
Countessa

@Chocobabe9: You need WinZIP or a rar program that accompanies that type of file on your pc. Do you have one? This behaviour is not normal. Do you have problems downloading other types of files or just .rar/zip files? Try right click and "save as" see if that helps. Other wise it might be another problem. Consult these links and see if they can be of some help: http://forums.techguy.org/multimedi...-rar-files.html
http://www.modthesims.info/archive/...p/t-122398.html

I love it! Thank you!
angieylucas10
Test Subject
THANKS POST
#18