by iCad Posted 10th Dec 2010 at 2:39 AM
10 Comments / replies (Who?) - 9 Thanks Posts
Picked Upload! This is a picked upload! It showcases some of the best talent and creativity available on MTS and in the community.
So. I finally overcame my irrational fear and got me the AnyGameStarter so that I could build base game lots to share. And I decided to just go ahead and bite the bullet and see if I could build a decent-looking lot without CC and just base game stuff. And I did! I think! I mean, it's not the prettiest thing in the world on the inside, but I think I managed to make the exterior pretty attractive and the layout pretty functional in a pretty small space.

In any case, here it be: 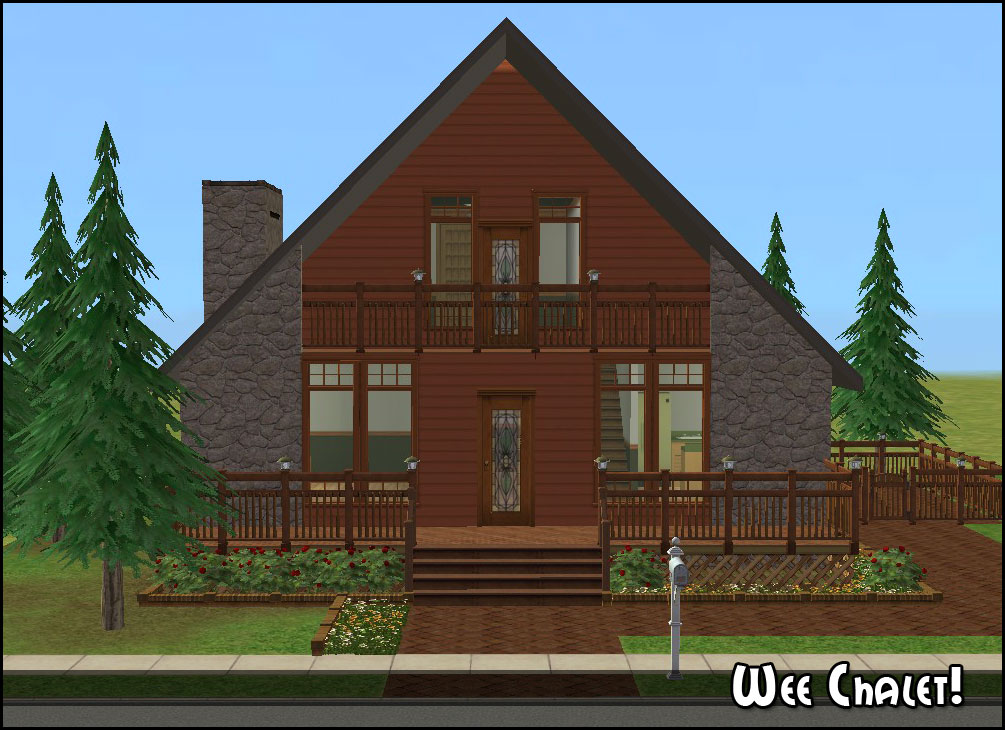 I call it the Wee Chalet because...well, that's what it is. The name also amuses me because female Sims often seem to say something that sounds like "Wee chalet!" when they're talking on the phone.

But anyway, since this was going to be base game and no CC, I wanted something simple, and you can't get much simpler than chalet-style. It's basically a square with a gable roof on it. The challenge becomes making a square with a gable on it interesting-looking. And trust me, with the base game and no CC, that ain't no small thing. Seriously, I don't know how you people do it with complex lots. I have renewed respect for all of you. Anyway, here's the details of what I ended up with, pics first: 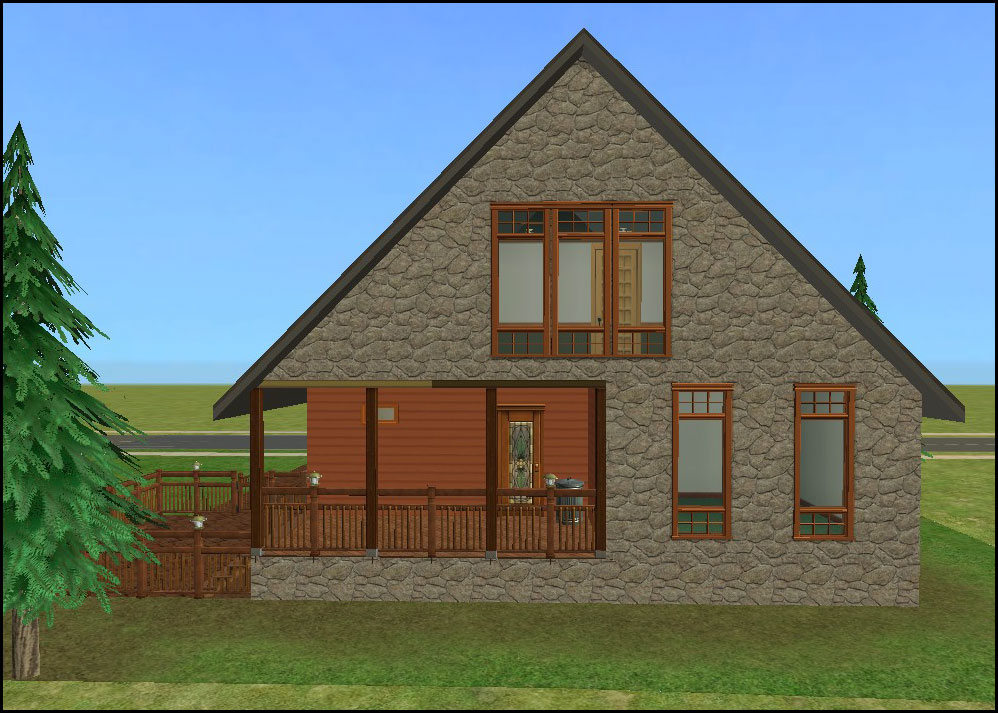 Closer-up of the front, to show the gardens and the depth of the second-floor balcony: 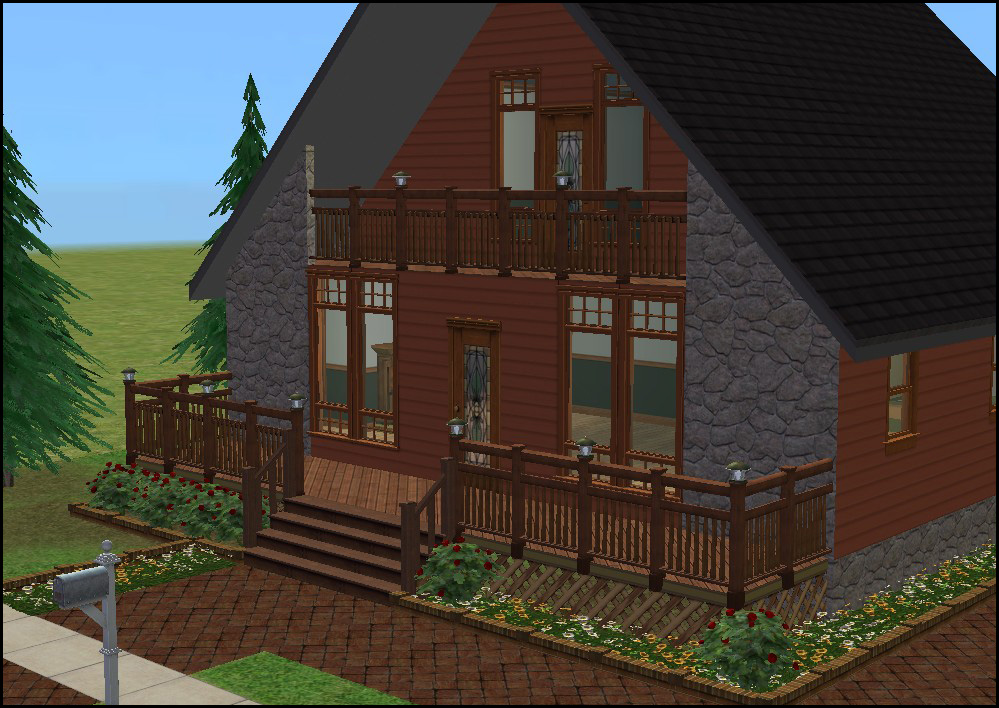 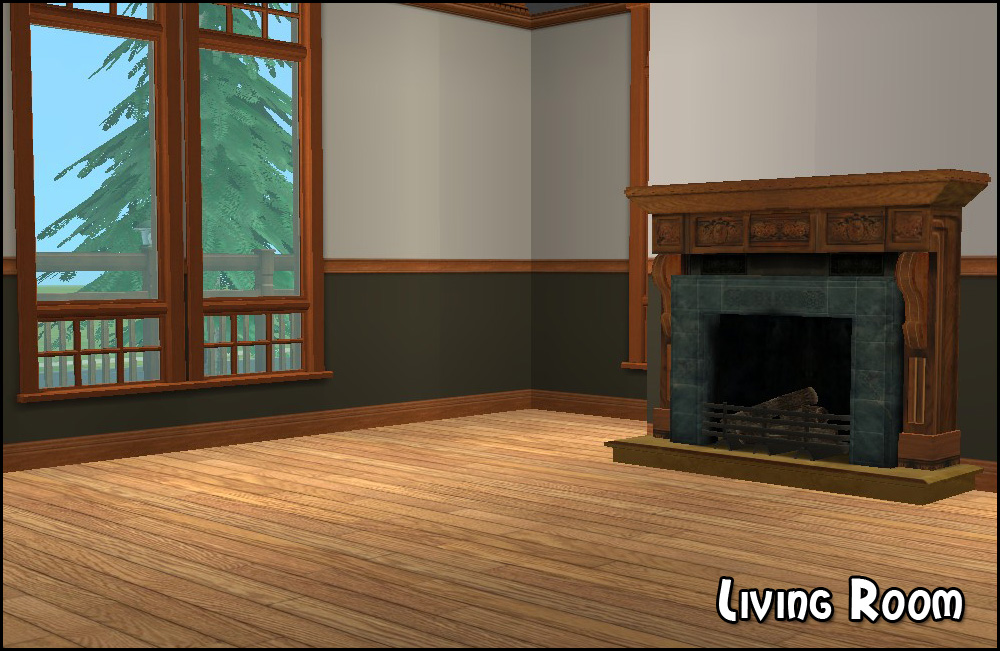 Lot size is 2x2. This is something of a "cheat," actually. The base game's smallest lot is apparently 3x2, but the extra space was ridiculous, so I lot-adjusted it down to 2x2. Thank God for Mootilda!
Price: 27,381. It could certainly be made cheaper, if you wanted/needed it to be.
2 relatively roomy bedrooms. Technically, you COULD add a third on the upper floor, but it'd be awfully teeny and/or would have to be a bit oddly-shaped to allow access to the stairs. So, I left that space empty. Its three windows make it nice and sunny, so it'd be a nice place for a little game area or a home office or crafting space.
1 bathroom
Living room with fireplace
Teeny kitchen with corresponding teeny eating area.
Outdoor living space: Alpine-style open front deck with an upstairs balcony protected by an oversized roof overhang. Covered porch in back that steps down to a fenced patio.
All landscaping will need maintenance, since it's all Maxis, of course. Hey, at least I was nice and put evergreens on the lot, so your Sims won't have to rake, too.

As with most of my lots, this is unfurnished and mostly undecorated inside, but the kitchen and bath are fully-fixtured/countered. There's at least one light fixture in every room, and there's a phone. That's it.

In the end, even though this is a base-game lot, I kind of think this would make a nice little vacation home/rental for a small family if you have Bon Voyage. I can imagine a little cluster of copies of this lot all together with snow on them and evergreens all around, like a little ski village with mountains in the distance...even though Sims can't go skiing.

Also, in the straight-on pic of the front, I have no idea why there's a bit of light in the very peak of the gable. I suspect that it's the lighting mod that I have in my game that's doing it, because it causes most lighting oddities that I encounter, which aren't bothersome enough to make me want to go to the effort to uninstall it. But if you download this and don't have a lighting mod and you still have that weirdness, do let me know so that I can look into it further.

Back to download view
10 Comments / Replies (Who?) - 9 Thanks Posts
Hide Thanks Posts for this thread (Show only feedback)
necla
Test Subject
THANKS POST
#2

icad! The Wee Chalet is very appealing and interesting! You did what you set out to do, a nice feeling, right? Great job!
tsoureki
Field Researcher
THANKS POST

On behalf of all of us who have bloated download folders with all of the cc that we've accumulated thus far....THANK YOU! You did a great job!
Pippenhouse
Field Researcher
THANKS POST

Nice job, It looks so cozy. It'll be fun to furnish and decorate, thanks for sharing!
addicted2sims4ever
Test Subject
THANKS POST
#6

This house is spectacular! It almost looks like my real house! Thanks so much!
moonlight_frog
Lab Assistant
THANKS POST
#7

Definitely downloading for one of my challenge 'hoods. Thank you for making it!
wendy_brune
Test Subject
THANKS POST
#8

Awh, this is so cozy and nice. It'll be a perfect mountain vacation home for my lawyer sim! Thank you very much!
feergoortens
Banned
DELETED POST
17th Feb 2015 at 4:52 PM

Inequality Has Not Risen Since the Financial Crisis
This message has been deleted by HugeLunatic. Reason: spam
mrslott369
Test Subject
THANKS POST
#9