by Phaenoh Posted 2nd Apr 2012 at 6:03 AM - Updated 16th May 2017 at 5:13 PM by Phaenoh
18 Comments / replies (Who?) - 7 Feedback Posts, 11 Thanks Posts
wgroome's text: When Layton and Lucinda found out they were expecting it was the greatest day of their lives. When they found out they were having triplets? Not so much. Now their three daughters (athletic Lara, bookworm Leanne and musician Lorrie) are all teenagers, they are demanding their own rooms. Layton and Lucinda are happy to move, but want a large master bedroom and their own en-suite bathroom.

so elected to do the Lewis family. Either I'm way off base with the names or I just suck at making people. The Lewis family ended up being the O'Donnel family in my game. Patrick, Brighid, Lara, Leanne, and Lorrie moved into an old Irish manor. (I was making Layton and somehow he became a leprechaun, so I made the family Irish from there.) (apologies to any actual Irish out there, this is way stereotypical).

The house has a long history, it was built many many years back before the roads through town were drawn up. What is now the side of the house used to originally be the front. There was a large garden and doors to both main areas of the house. When the town got bigger and expanded outward, the road ended up on the side of the house. The front porch was redone to accommodate the new entrance direction and a driveway was put in. Many of the original details in the house still exist - like the wood floors, bathroom tiles and much of the fixtures from the copper kitchen, though it was moved from what is now the dining room. The stone annex was less of a fire hazard. A good deal of the house has been renovated as well. Its an odd mix of old and new, and the O'Donnels think it's just perfect for them. The kitchen and the living room are just the right size for the family to come together and enjoy their favorite activities without tripping over one another. 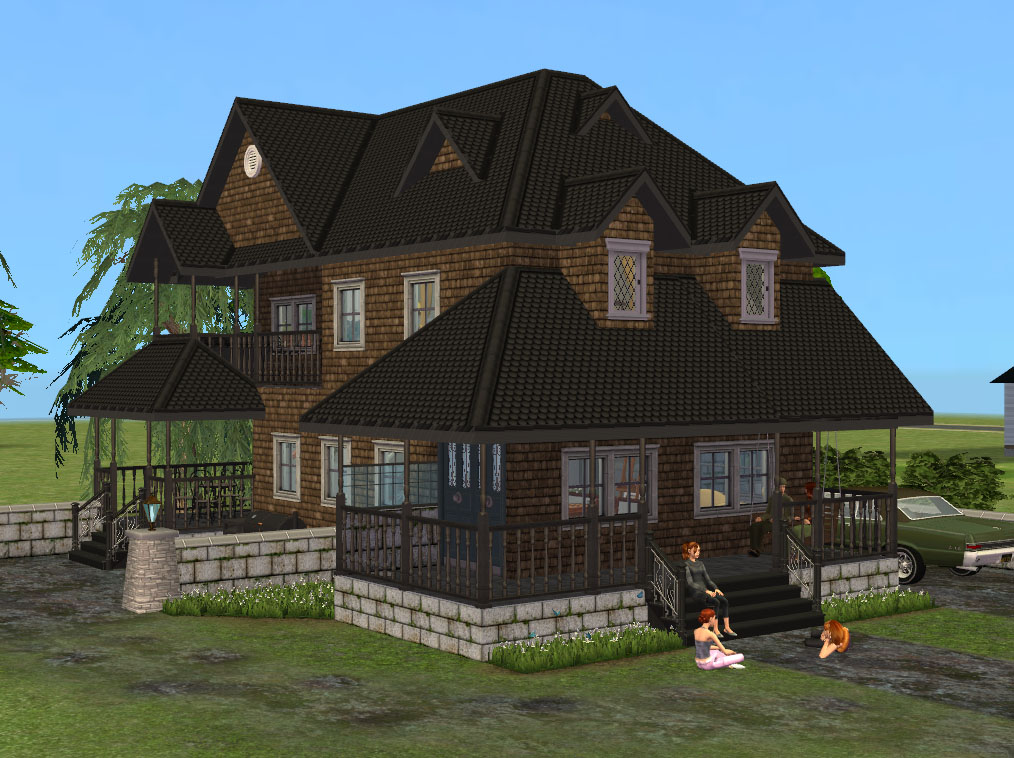 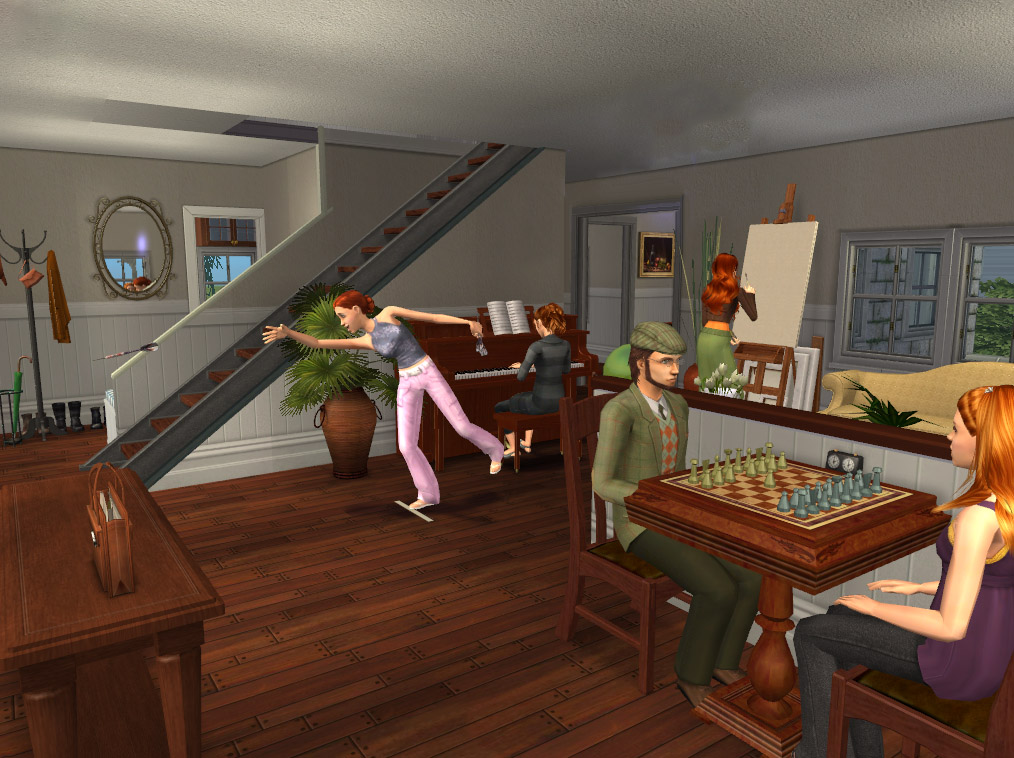 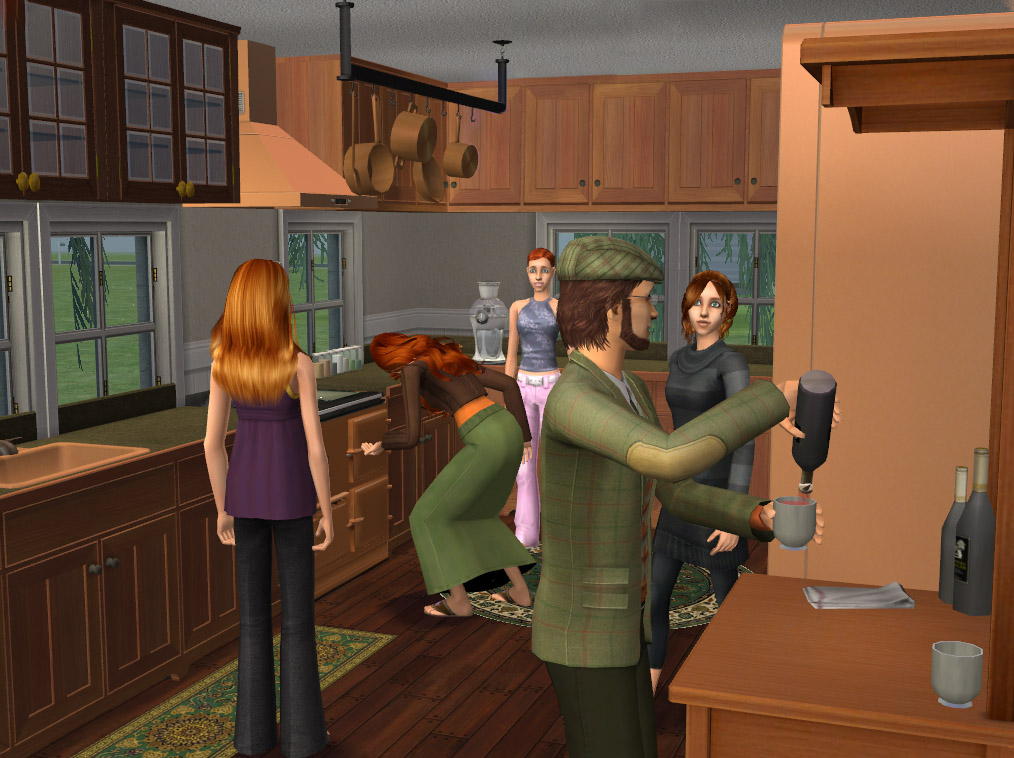 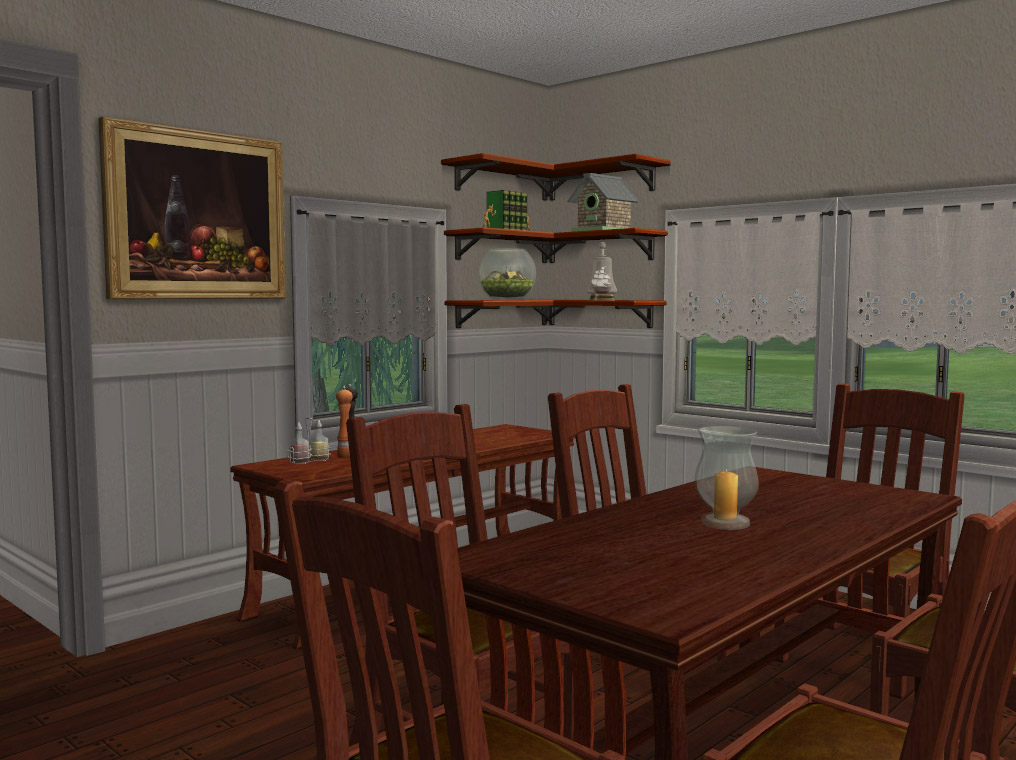 When the girls want to be alone, however, they each have an identically sized bedroom to partake in their hobbies. Lara is a ballet dancer. She has a barre and a mirror and she's also a bit of a girly girl. She loves pink and has crushes on all the celebrities. Leanne loves Shakespeare and anything from the Olde World. She also has taking up acting and lives in a fantasy land. When she doesn't have her nose in a book, she has her head in the clouds. Lorrie is quite the violin virtuoso. She regularly performs in concerts at school and sits First Chair. She's not just interested in Classical though, she also has a sweet stereo system to listen to the College Rock and Pop stations. See the pictures below for images of their rooms.

Just your typical family of redheads!

Custom Content NOT Included:
You will need my Birdhouses, my Phonebook, and my Piano. I didn't include them because I update my stuff only on their pages and shoot that birdhouse has a lot of recolors.
Also, you need HL's awesome modular fences. They don't package with the lots and I almost missed them!

Back to download view
18 Comments / Replies (Who?) - 6 Feedback Posts, 11 Thanks Posts
Hide Thanks Posts for this thread (Show only feedback)
Sims99Fanatic
Banned
THANKS POST
#2

Finally! One that is not a Chuck Norris upload! He's great, but I was getting weary! By the way, this is a very pretty lot. My sims will love it, thank you so very much.
lorinsv60
Forum Resident
THANKS POST
#3

What a lovely family home! Love the roof details and the grounds look great, like it gets a lot of rain. Very cool.
TheGuySim
Forum Resident
THANKS POST

This is absolutely gorgeous! It must have taken you ages!
Sim Fans UK - Free downloads, tutorials, game help and chat!

Thank you so very much for this home. It will fit in well with my neighbourhood. Just a quick question. The car that's parked in the driveway - where did you get it? It would be perfect for one of my families.

Thank you once again

@Illusion1986 The car is by Fresh-Prince, it is mentioned in the CC included list.

I love the house it's great. Does the family come with it?
Illusion1986
Lab Assistant
THANKS POST
#9

@sarah*rose Cheers! I must have missed over it.
[email protected]
Lab Assistant
#10

no, this is most likely just the house. packaging families with a house gets far more complicated, that is why you don't find very many on here

I love the house, it is exactly what I have been looking for. Thankyou so much!
Simmakerlover98
Test Subject
THANKS POST
#12

I love this house (the family was also epic XD I loved them on the pics). I actually used it on one of my sim videos, and ever since I've been hanging around that house on my sim game, I'm obsessed with it. Cheers, you did a terrific, awesome job.
Phaenoh

Quote:
Send me the link, I'd love to see it!
New! Fully Renovated Pleasantview!
Like my work? Help me make a difference!
Simmakerlover98
Test Subject
#14

Thanks! The link is:
http://www.youtube.com/watch?v=SOZsW-fYuvE

You're awesome, your creations are epiiiicc XD

This looks beautiful! I can't wait to see this in my game.
Chobeegal
Test Subject
THANKS POST
#17

Very nice, but it does not look at all "Irish". It is typical of rural America, not Ireland (or UK). Among other things, we don't have open-air "porches" on homes here in Ireland (or UK) since our weather is generally not conducive to use of such a feature. Those are a typically American feature. If we do have a "porch" feature, it is glass (double glazed) enclosed in order to make it usable.
Phaenoh

Quote:
After doing a quick google search (which I should have done prior to naming it) you are right, this is not Irish at all. I will argue that it is not rural America though. I was going for the look of the (what I see in movies and TV) old manor houses on the moors, so it's much more Scottish than Irish. Please forgive my ignorance and liberal (and apparently wrong) use of your country's aesthetic. As for the porch, I'll grant that's it's American inspired all the way. >.<
New! Fully Renovated Pleasantview!
Like my work? Help me make a difference!
emodarkwolf
Lab Assistant
THANKS POST
#19

It looks so cool, and I love the stories you always write accompanying the posts, hehehe

Gonna try it out in my game, I just don't have Teen Style SP but I hope it won't make a lot of stuff missing.

EDIT: Is the "desk" on the "music sister" room from Teen Style? Because it appears on my game but not on the catalog :o