by PortiaRaven Posted 27th Aug 2012 at 11:16 AM - Updated 20th Sep 2012 at 2:52 AM by PortiaRaven
34 Comments / replies (Who?) - 16 Feedback Posts, 9 Thanks Posts
Picked Upload! This is a picked upload! It showcases some of the best talent and creativity available on MTS and in the community.
Hello there! I'm back again to share another one of my sims. This time its Aoi! For those of you unfamiliar with the Japanese Music scene, Aoi is the second guitarist to the Visual Kei group, the GazettE. Though he is the oldest member of the group (2-3 years older than the other members), his personality is still that of a young teen. He's a heavy drinker, just like his friend/band mate Uruha , and is as perverted as they come. But when it comes to making music, he's strictly business. 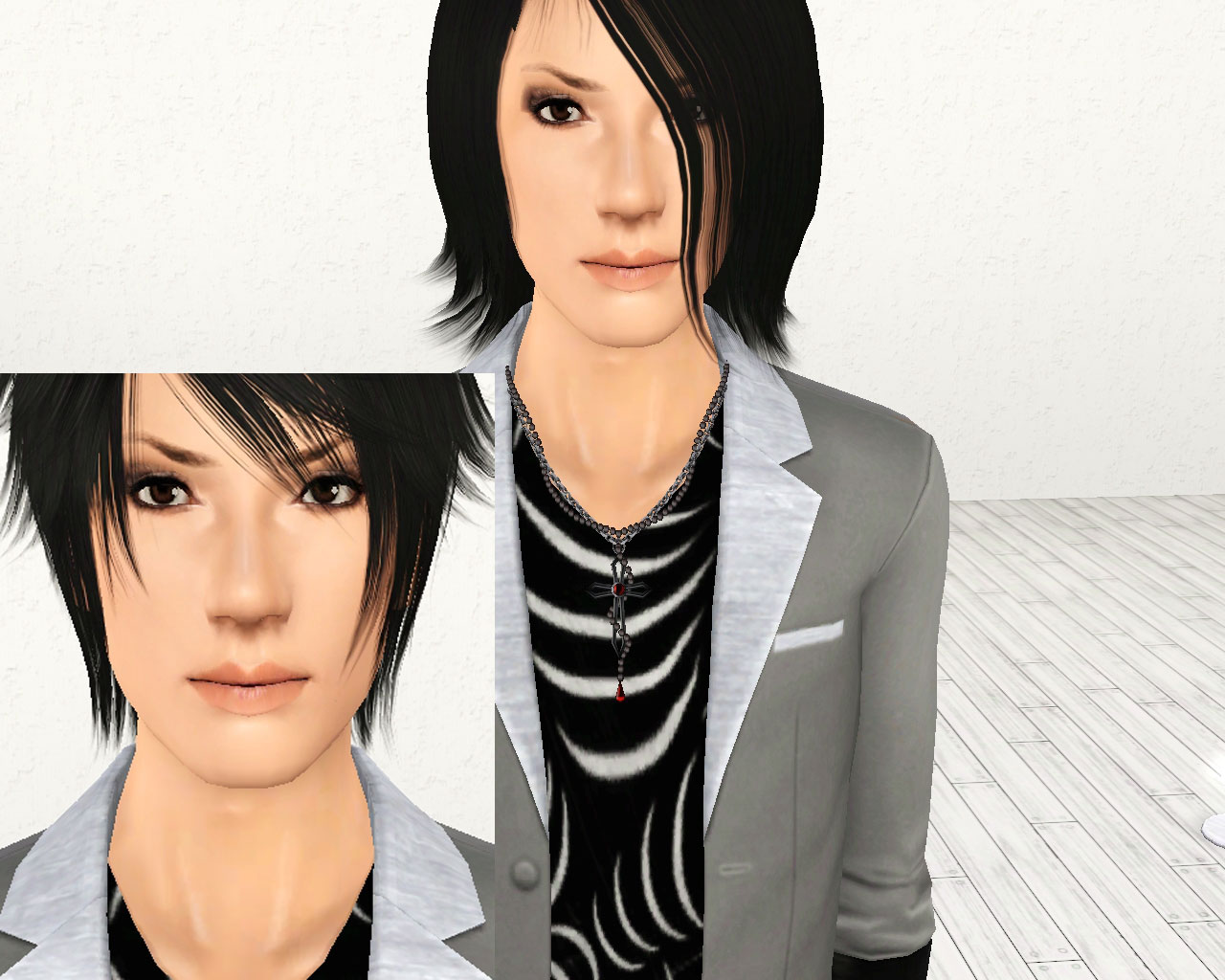 His traits are: **If you don't like his traits, you're free to change them to whatever you like!**

Likes and Zodiac:
Sushi (the real Aoi likes grilled Chicken, but there isn't a choice for that T.T)
Indies music
Red
Capricorn

It's taken me quite a while to work on Aoi. For those of you that know of him, you know that his face is quite unique. His lips, nose and chin were quite the task in recreating. I hope I did him some justice. lol I had to use many sliders on him to get him as close to accurate as possible, so if anyone wants him, you have to make sure that you download ever single last one of them or else he'll be borked to hades!

Due to the lack of men clothing, I did my best to recreate some of the gear he's worn in photo shoots. Many of the outfits that he and his bandmates wear are considered "metro sexual" and unfortunately there aren't that many creators out there that make them. So I did the best with what I had. You're free to change his outfits to whatever you want. 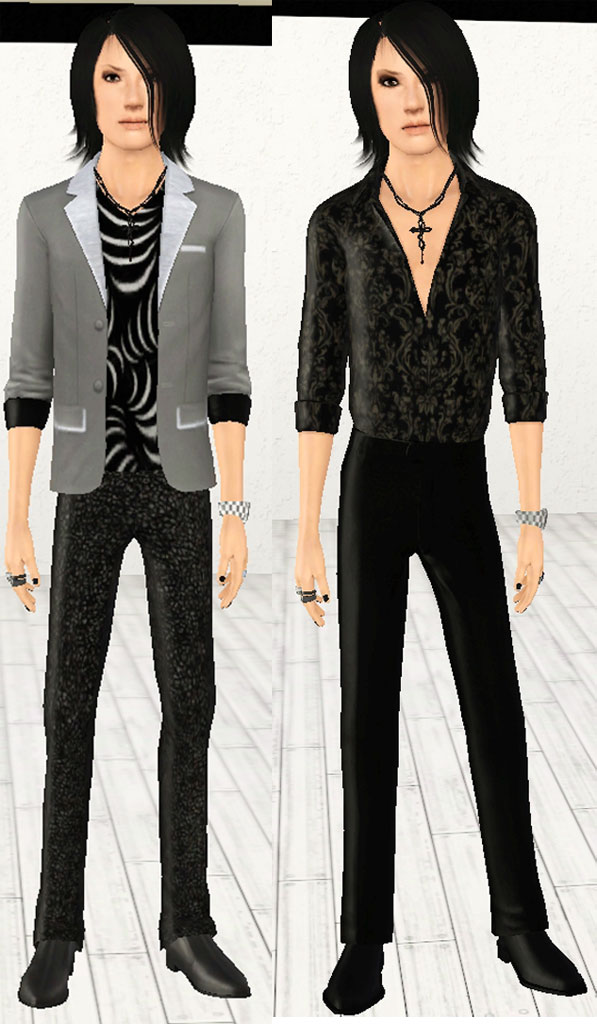 Aoi is packaged WITHOUT his skin and he has no CC connected to him. To get him to looking as he is pictured you MUST download everything that I have listed below. This Aoi is modeled after the 2008 version, however he can be changed to whatever "era" you wish to have him. If you can find the right hair and clothes he'll look great as the 2002 version or even the current look he has now. 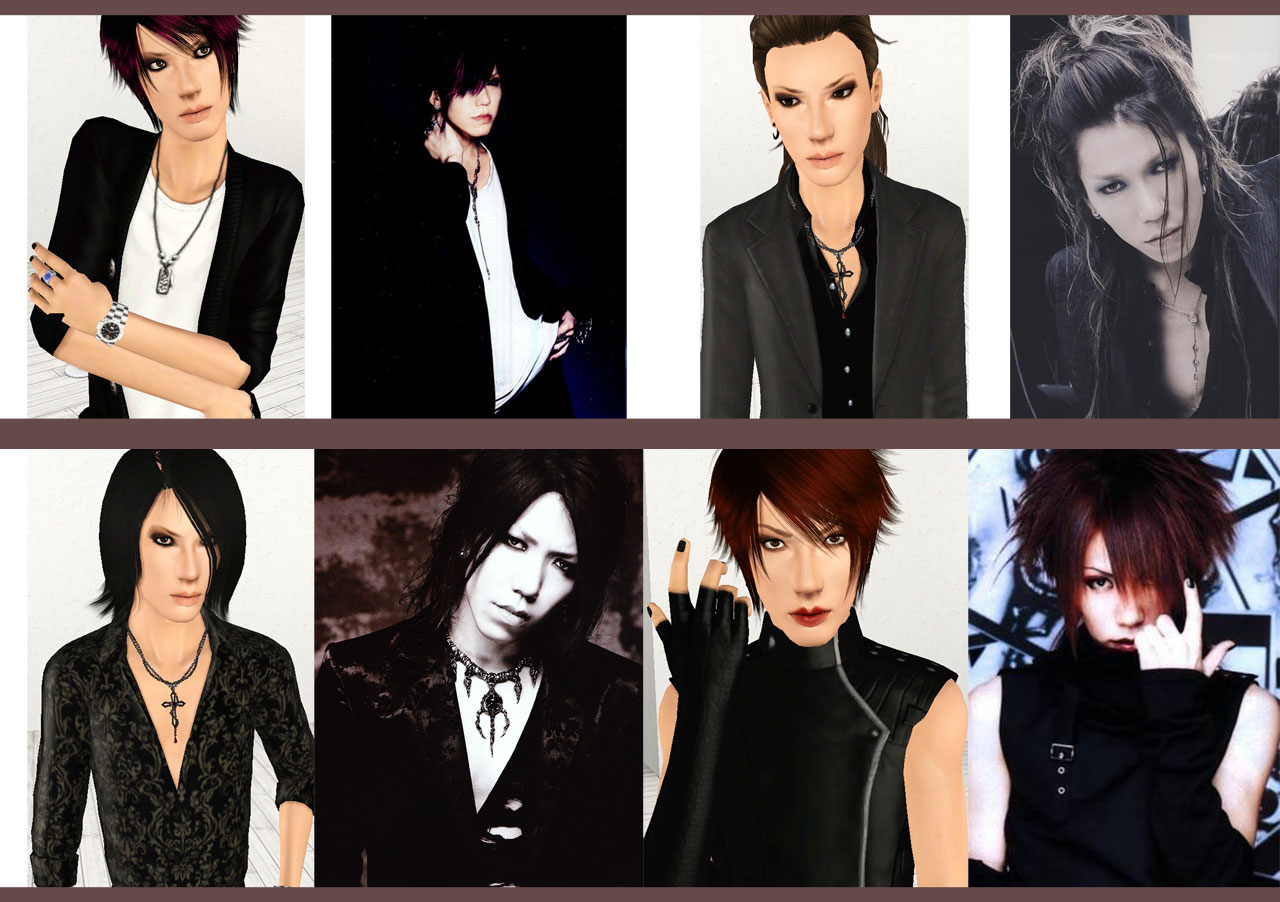 Back to download view
34 Comments / Replies (Who?) - 19 Feedback Posts, 14 Thanks Posts
Hide Thanks Posts for this thread (Show only feedback)
Page 1 of 2
claudiasharon
Top Secret Researcher
THANKS POST

He looks interesting, good for my game. Thanks for making him!
PortiaRaven

That is a great likeness! Good job (and thanks for sharing) ^^
ShinigamiGtc

you made a wonderfull work on him, he looks a lot like him!
are you going to make the other band members?

Aoi and Kai are my favorites! They will form a band in my game~
I always figure Reita and Ruki get enough love.
Thanks for sharing!
PortiaRaven

Thank you! And thanks for taking a gander at him.
Yes I do plan on working on the other members. I already have beta sims of each of the remaining three. Now I just have to tweak them. lol

Thanks for checking him out! And you're welcome

Well I suppose I'll work on Kai next then! I actually had in mind to do Ruki, but seeing as you're the first to mention two of your faves, I'll do him next! Thanks for checking him out

No idea who he was before seeing this, but I think you did a very good likeness, based on photos! Unique look. Thanks for sharing!
abbyheath1

Late Night + Your Sims = Happiness
Thanks

I don't follow Japanese music much, but you did a really impressive job on this sim. I might come back and download him later. I like to have some sims of all different races in my game.
PortiaRaven

Thanks a lot for checking him out and you're welcome!
PortiaRaven

Happy for your happiness!
PortiaRaven

Thanks a lot. I'm completely sprung on this band. They're my favorite. (as if that's not obvious lol) Im glad you checked him out!
vale3030
Test Subject
THANKS POST
#16

Thank you so much ^^ I love your sims <3
Whats with Ruki Reita and Kai?
I'll check every day from now on ^.^
Thank you again <3
PortiaRaven

lol well, I am in the works of fixing Ruki and Kai right now. I think that upload will be a double feature!

Reita will have to be last. He won't have a nose band, unless I find someone that can make one for me. T.T

Thank you for taking a look at these sims.
ScorpioMaurus
Inventor
THANKS POST
#18

"Filth in the Beauty" is my favorite of their songs, This sim is beautiful thank you :D
PortiaRaven

I like that one too. I have quite a few favorites by them so I can't just name one. But I will say that I love one of their most recent songs, "Dripping Insanity".

Thanks so much for checking him out!
charlestheking
Test Subject
#20

thanks
hey thanks for making him!

Just a few things the jaw and upper lip sliders are gone from the thread you linked..Their media fire page says they got removed due to copyright claims (stupid).Will he still look fine if I don't have them? I have all the other sliders, and the mods to allow sliders. Oh and the Chinese page, Ephemera, is giving me a hard time but I got a few things off it but the eyes and newyearsset won't download, it goes to a white page or goes to weird ads.

That is the blog for the Jaw sliders. every so often, it seems that the links become wonky, so you have to actually scroll through the posts to find the download. There aren't many to go through, but the nose sliders and all the other ones linked to this creator are there. :D

As for Ephemera's things, I can get those to you if you like :D
My random Sim spam
cyclo_tripz
Lab Assistant
THANKS POST

Totally love him <3<3<3 You did an amazing job and I can't wait to see Ruki! I love jrock and visual kei! The GazettE, SCREW, and Nightmare were the first bands to draw me into this scene

I've been working on makeup to fit this genre and it makes me happy to know there are others who are into this style! Keep up the good work!!
PortiaRaven

Wow really! That would be of sooo much help! I mean, there are tons of makeup that fits a lot of what these guys wear, however, the creators only make them for women and it TOTALLY sucks balls! lol

I'm glad you like this sim, I worked really hard on him!

I don't believe my eyes!

Thank you soooo much

Wooow you did an awesome job with him

I never thought of having the GazettE in my game, but now I do :D