by Gemificus Posted 21st Oct 2012 at 8:58 PM
11 Comments / replies (Who?) - 5 Feedback Posts, 6 Thanks Posts
Many sims often thought Old Ted Lombard was a sandwich short of a picnic so when he bought himself a derelict plot of land filled with other sims unwanted junk and dying tree's nobody was surprised.

Ted swore he would build himself the finest home the town had ever seen. Most sims thought Ted a joke but he set out to prove them wrong and started work, cutting and shaping tree's and repairing the old broken down furnishings people had dumped in the wasteland he would one day call home.

The townspeople stood in awe as they stood by and saw the beautiful pond he had made and the amazing greenery which now stood were once only broken down trees had existed. The solid bridge that crossed the pond gave off a wonderful smell of freshly cut wood and the flowers surrounding the area gave off an array of colour (all though many sim's noticed missing plans from there own gardens) 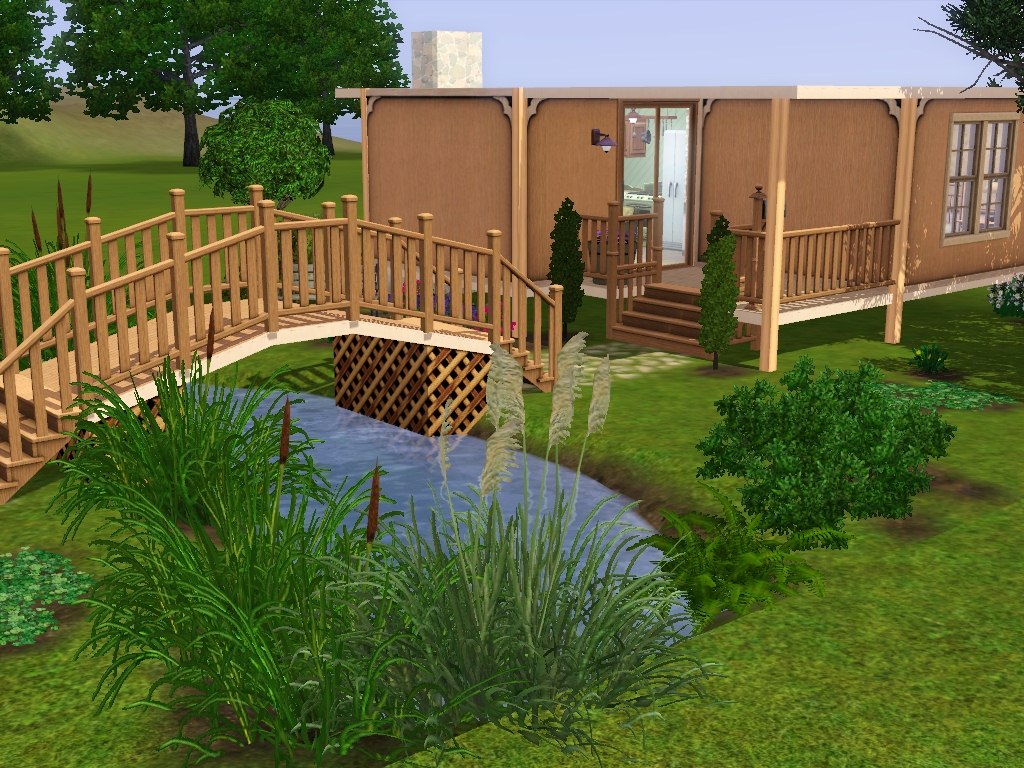 Poor Teddy spent so much time and lumber on that bridge he soon found himself running low on supplies so the cabin was not as grand as he first would have liked. To recover the old abandoned sofa he had to use the material from his tent. 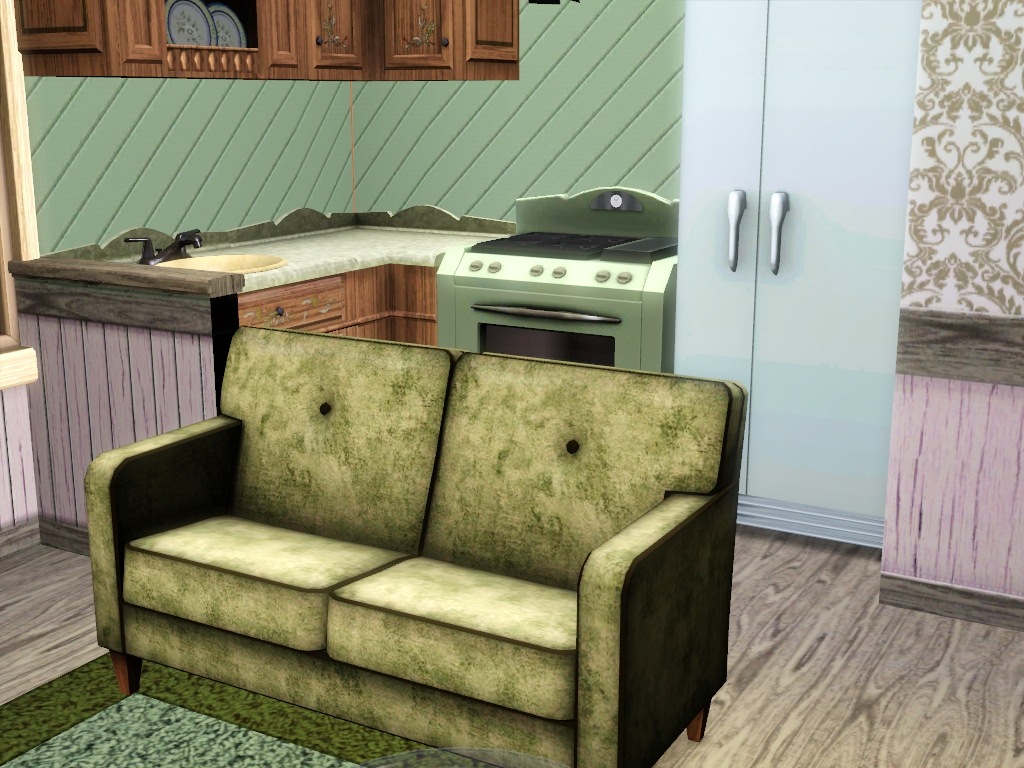 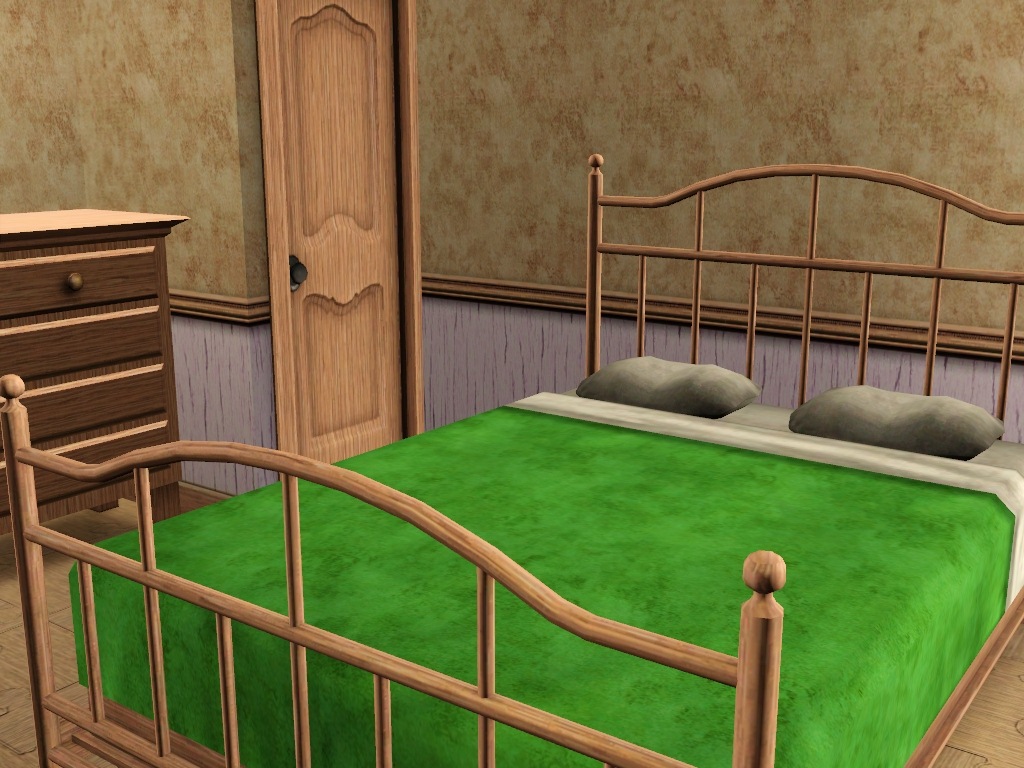 Sim's were impressed the broken down wasteland had been re-born into a beautiful home but were had Teddy Lombard gone???
Had all that time alone sent him over the edge?
Some say a werewolf got him and dragged him off others say he was turned in a toad by the witch who owed the Forrest next door I guess we will never know ...

Although!! the crazy old man at the bus station looks awfully familiar.

Ever since i learned how to make bridges i have been looking for an excuse to build one then i happenstanced upon a picture of an interesting looking cabin and wondered if it was possible to make.
I wanted this lot to be a starter lot so it isn't overly decorated but the perfect starts for your outdoor loving sims to fish paint or just relax, will fit 2 sims without clashing and looks nice in game,
as you can see from the pictures there is still some of the original decking under the cabin but it wouldn't let me remove that i changed a few things slightly from the original to have it all fit together but tried to keep it as true to form as i could.
I built this making sure to use only base game items..

for the beams the lot stands one i have used Simple Column (full wall height) by Funbruk
i have used CAST yourself a chimney! by Armiel
once again I used the shag texture from Carpet Love - 8 Essential Styles by Purplepaws

Built with Game Version: 1.39
Key: - File was updated after upload was posted
Need help with downloading or installing content? Click this link!
Don't forget to Thank the creator after downloading! Use the Thanks button located above the screenshots above.
Quick Guide:

If you need more info, see Game Help:Installing TS3 Packswiki for a full, detailed step-by-step guide!
Back to download view
11 Comments / Replies (Who?) - 4 Feedback Posts, 6 Thanks Posts
Hide Thanks Posts for this thread (Show only feedback)
keirra
Instructor
THANKS POST

I loved your story and the cabin. The bridge is a really nice touch. Thanks for sharing.
maiarose
Test Subject
THANKS POST
#3

Lovely! And the decking underneath is an easy fix, something is occupying those tiles. Some ceiling lights, curtains, windows, wall objects and im sure some other stuff just gott look.
Great job on it though really is lovely starter.
Riptide651
Top Secret Researcher
THANKS POST

I know what you mean about building bridges LOL! I was the same way. Still am, really. I just love them and yours is beautiful, as is the entire lot. Thanks for sharing :-)
LadyAngel

This is great, and I love the bridge!

What a great story! I'm intrugued. What DID happen to old Teddy Lombard? Did you plan an ending for this story? Is Teddy going to return, and build another, more lavish home? Anyway, I love this house. And, the bridge over the pond, is lovely. It reminds of Asian, Meditation Gardens. I can't wait to add this lot to my game. Thanks so much for sharing it with us.
Gemificus

I'm not sure myself l8nytsimmer. I think he went crazy and lives at the bus station talking to the rats. very few sims have seen him but i doubt he will be making any more its a ooak
An Alien stole my lunch
Florian Eliade
Test Subject
#9

could you make a real private school?
SnprTw
Test Subject
#11

Proofreading is a wonderful thing.
Gemificus

Your right SnprTw proof reading is a wonderful thing

but Dyslexia can sometimes cause issues.
sometimes when you believe something to be the best that you can get it. negative disparaging and sarcastic remarks can make you feel stupid.

thank you for your feedback tho.
An Alien stole my lunch