"I'm not a psychopath. I'm a high-functioning sociopath. Do your research!" 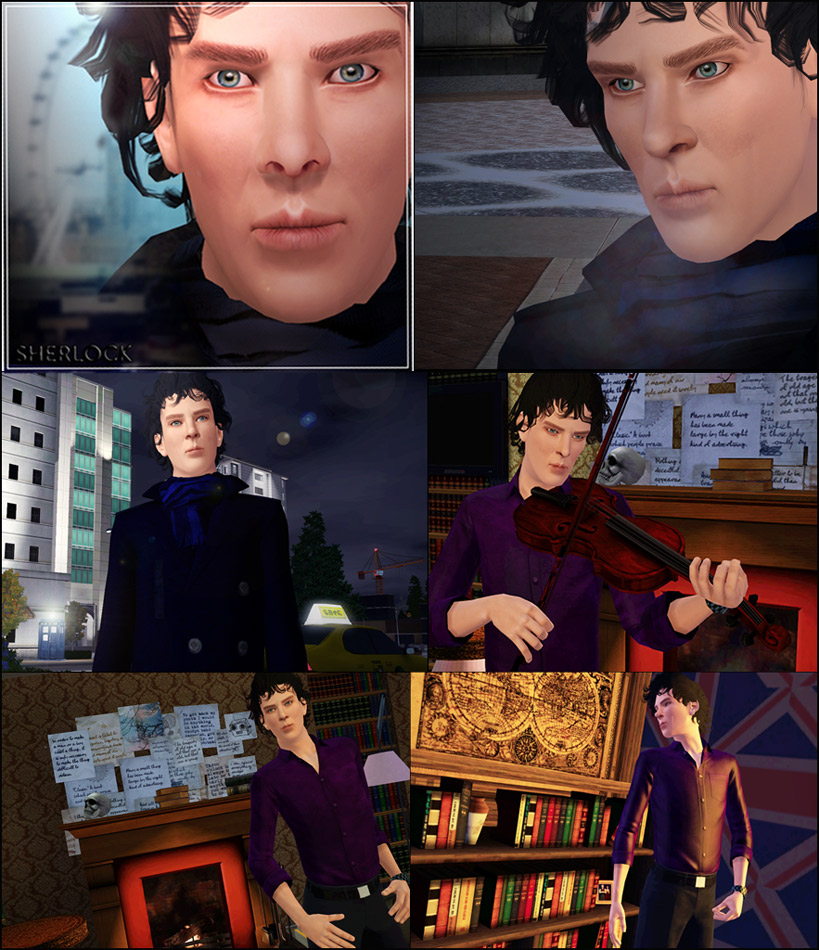 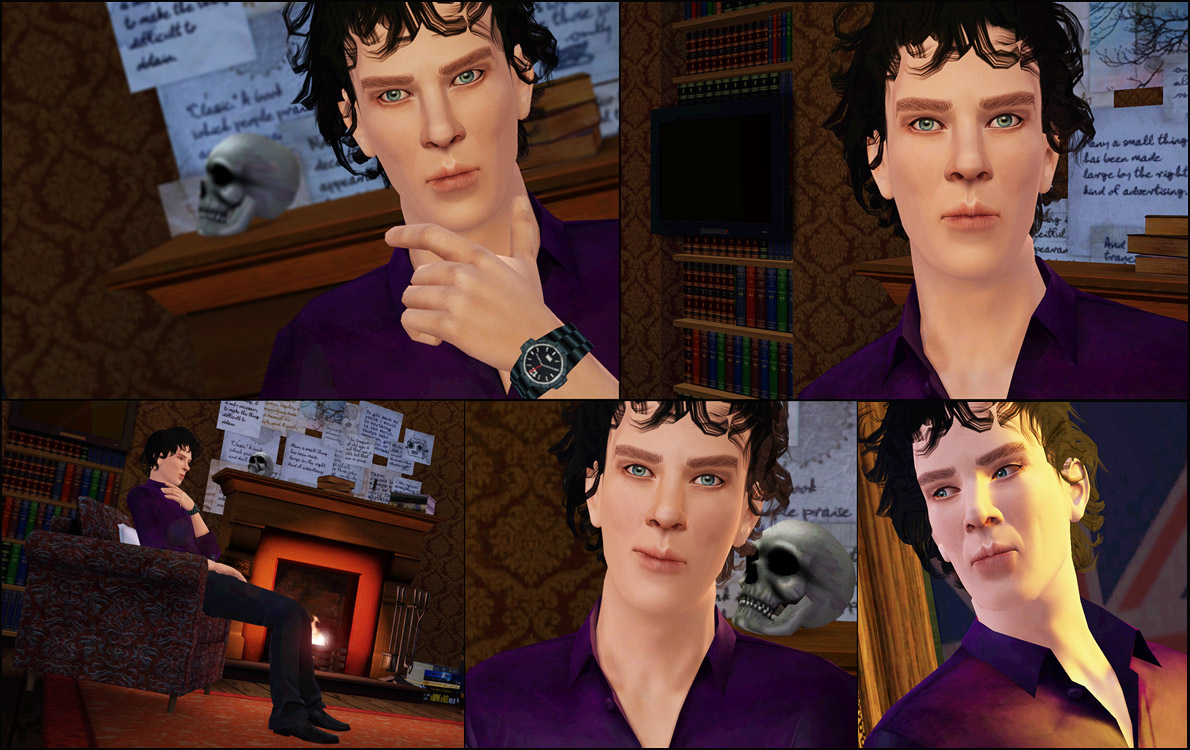 As you may already know, Sherlock is a British television crime drama that presents a contemporary update of Sir Arthur Conan Doyle's Sherlock Holmes detective stories. It stars Benedict Cumberbatch as Holmes and Martin Freeman as Doctor John Watson. Six episodes, broadcast since 2010, have been produced, with three more episodes scheduled to begin production in March 2013. I love "Sherlock" and I know many of my fellow simmers do too, so I decided to maybe try and make him into a sim. And he has such an interesting face, how could I resist (painful to sim really, even with all of the sliders)

I don't think my sim is quite as lovely as the real Benedict, but what can ya do

Unfortunately, the sim can't sound like the real thing either, LOL.

I think I should note that, as always, I kept the sim simmish as possible because any further tweaking caused distortion and weird shadows which is something I really hate. 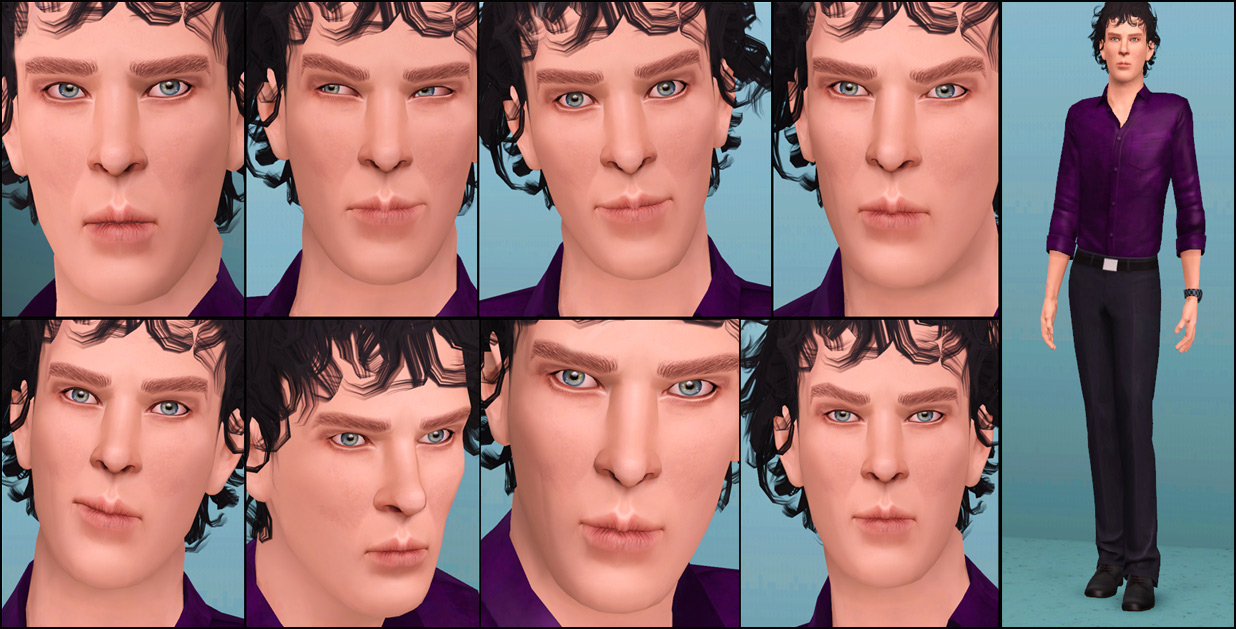 The sim is an adult, and is packaged with default hair and skintone. Purple shirt and shoes are base game, pants are Supernatural. The coat is by cazarupt, and the hair is from the store. Other CC listed below

As you probably already know, you only need these sliders if you intend to change the sim's face. If you like it the wayit is, then you'll be fine without the sliders.

So, that's it! Hope you'll have fun with Sherlock!

Additional Credits:
Thanks to all the CC makers and all the lovely tumblr simmers! <3
Tags: #sherlock, #sherlock holmes, #benedict cumberbatch, #bbc

Back to download view
84 Comments / Replies (Who?) - 29 Feedback Posts, 52 Thanks Posts
Hide Thanks Posts for this thread (Show only feedback)
Page 1 of 4
Mera Benzema
Field Researcher
THANKS POST
#2

It's funny but it's great, thank you!
DigitalSympathies
Mad Poster
THANKS POST

I love this! Johnlock forever.
kotylol
Test Subject
THANKS POST
#4

This is fantastic! :3 Anyone else notice the little TARDIS?

Sorry to interupt but is the lot up for download anywhere, too?

I have no words to express my sincere awe of your amazing talent and epicness. I'm truly grateful to you and if I could, I would give you a thousand thanks instead of only a teeny tiny one.
gravel-in-a-blender
Test Subject
THANKS POST
#10

This is amazing! As an uber-fan I found a Russian-made one that took me hours to download because I can't read Russian and had to make an account and change the settings and all sorts, but I prefer this one definitely! You are truly an innnovator! I'm sure loads of people have tried and failed at his face, and have been waiting for such a brilliant recreation! YOU BEAUTY. Thank you!
MistyBlue

murfee - I don't know who made the lot, because their site is dead, but the link for download is here

PainAndDaffodils - Aw, thank you, you're too sweet <3

gravel-in-a-blender - Aww, thanks <3 It is an awfully difficult face to sim, I admit. I had to start from scratch a few times...I don't think the mouth area is perfect, though, because it's just impossible to replicate it on a sim. But I'm happy how he turned out

Something just went wrong... I downloaded everything, but my Sim doesn't look like your at all...

He is really ugly...

Fantastic work! The likeness is amazing! Are you planning on creating John? (Say yes please!)

Downloading to try him!
whoviangeek
Test Subject
THANKS POST
#16

You are my favorite thing this week! How you had the patience to sim BC's face, I will never know. Amazing likeness; just wonderful. THANK YOU. And, to echo whoviangeek (great name, btw!) above, I LOVE YOU.
kittykat999
Lab Assistant
THANKS POST
#18

Aw, you got ahead of me! I was considering posting my version of Sherlock I made in the Sims 3 on here! Anyways, nicely done, but I'm going to stick with the Sherlock sim it took me hours and hours to create.
MistyBlue

FavoleKS - Hm, well that's odd. Do you have all of the sliders? If you don't manage to resolve this, feel free to PM me and I'll send you .sims3pack.

kittykat - Oh, but just because I posted my version, doesn't mean you can't post your own. There's room for at least two TS3 Sherlocks here, don't you think? It's also good for the downloaders to have more choice. By all means, don't let me stop you from uploading your version that you've worked so hard on

Thank you so much - he's amazing! I can hardly believe I'm looking at a sim and not the real person. Wow! :D
One question though: Is there anywhere else I can download the hair he uses, maybe? Or a similar hairstyle I could use for him? Because when I try to download the hairstyle from the store, I click "download" and absolutely nothing happens. No matter if I try it in IE, Chrome, Firefox, nothing happens, not even a popup. I logged in first, my game is fully patched, and I don't know what else could be wrong. Very frustrating. =( And he won't be quite right without his curls! Dx Any ideas? I don't think I have any remotely similar hairstyles in my game right now.
FreakAboutSims
Field Researcher
THANKS POST
#21

What do you think about him having an involvement in Star Trek: Into Darkness?
Syva

Just wanted to drop by to say, amazing job on this sim

I'm a big fan of the show (I'm busy reading the books now as a result of it, haha), and you've captured the personality of the modernised Sherlock perfectly! The resemblance is spot on, fantastic work.
MistyBlue

HerGoldenHair - Hm, that's strange...I've searched, but couldn't find any other place to get the hair, and there is no similar one around. But if I find it, I'm gonna let you know

FreakAboutSims - I think that's utterly awesome and can't wait to see the movie!

MistyBlue you make all my favorite characters, in both TS2 and TS3. And they are the best out there!! Thanks for this sweetie! :D
Yavanna

Unfortunately I've tried it and may be because of sliders of something but the sim i get looks very little like the one in the pictures :/ Is there another way to get it? a sism3 pack or something? maybe that way it'd work
sammonsim
Lab Assistant
DELETED POST
3rd Jan 2013 at 3:48 AM

This message has been deleted by HerGoldenHair.