by iCad Posted 31st May 2014 at 4:07 PM - Updated 27th Jul 2014 at 8:21 AM by iCad
54 Comments / replies (Who?) - 6 Feedback Posts, 19 Thanks Posts
Picked Upload! This is a picked upload! It showcases some of the best talent and creativity available on MTS and in the community.
EDITY GOODNESS 7/27/14. Or 27/7/14. Whatever: If you like these carpets, you might like this, which I just barfed onto my Simblr thing because I was too damn lazy to take nice, MTS-acceptable pics: http://dramallamadingdang.tumblr.co...py-previews-yay Basically, it's the same color palette. Only it's on tile walls and floors. Ooooh! Ahhhh!

Now back to my original spiel:

I've been trying to get out of my rut of decorating my pixel dollhouses in more or less all neutral colors. Trying, mind you. I'm not succeeding very well, but I'm trying. In my efforts, I found myself needing some carpets in not-all-neutral colors. I know there are approximately 39 million carpets I could have downloaded, but it was easier to make what I wanted than to find what I wanted. And I figured I'd share. And since I haven't uploaded anything here in a while because I've gotten lazy and have been putting stuff on my Tumblr, I figured I'd put these here.

There are many color palettes out there that people use to color stuff, and I was going to use a couple of those, but then I realized that I'd end up with a lot of near-duplicate colors. I wanted colors in different shades of all color families...which got me thinking about a box of crayons. LIGHT BULB!

So, off to the internets I went. First, there was Crayola's site, where I found out what colors are currently included in a 64-box of crayons. Then off to ColourLovers, where I remembered seeing an article that listed all of the hex codes for Crayola's colors. And...here we are. Carpets in all 64 colors that you'd find in a 64-box of Crayola crayons, on a new texture that I created because I wanted something both plushy and a bit shaggy.

Here's a larger version of the preview pic, for better detail: 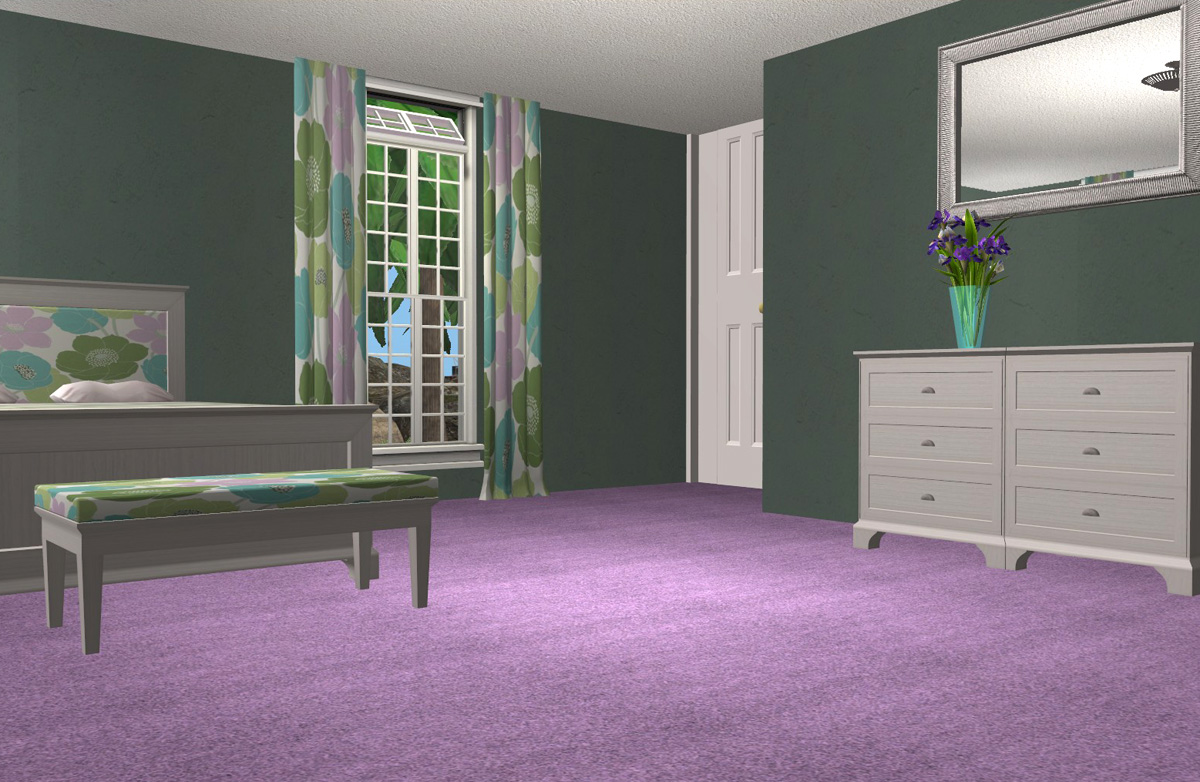 And here's a closer-up of the texture: 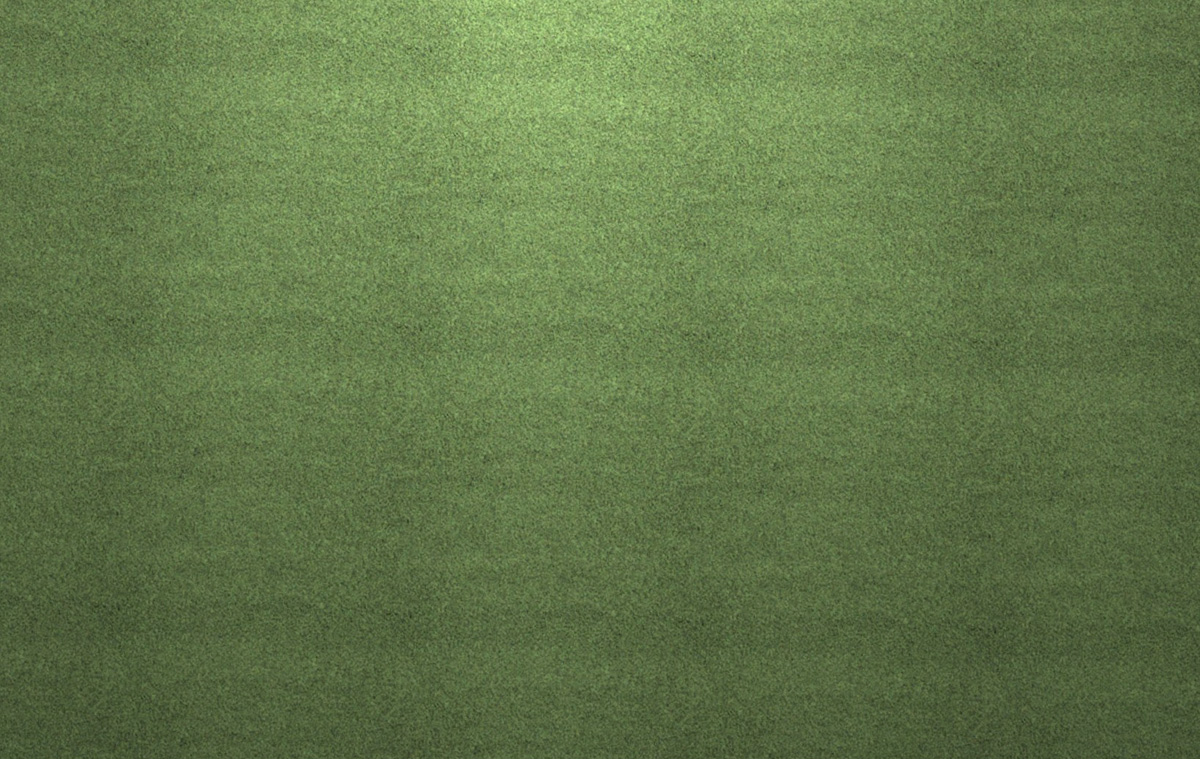 And here are the colors: 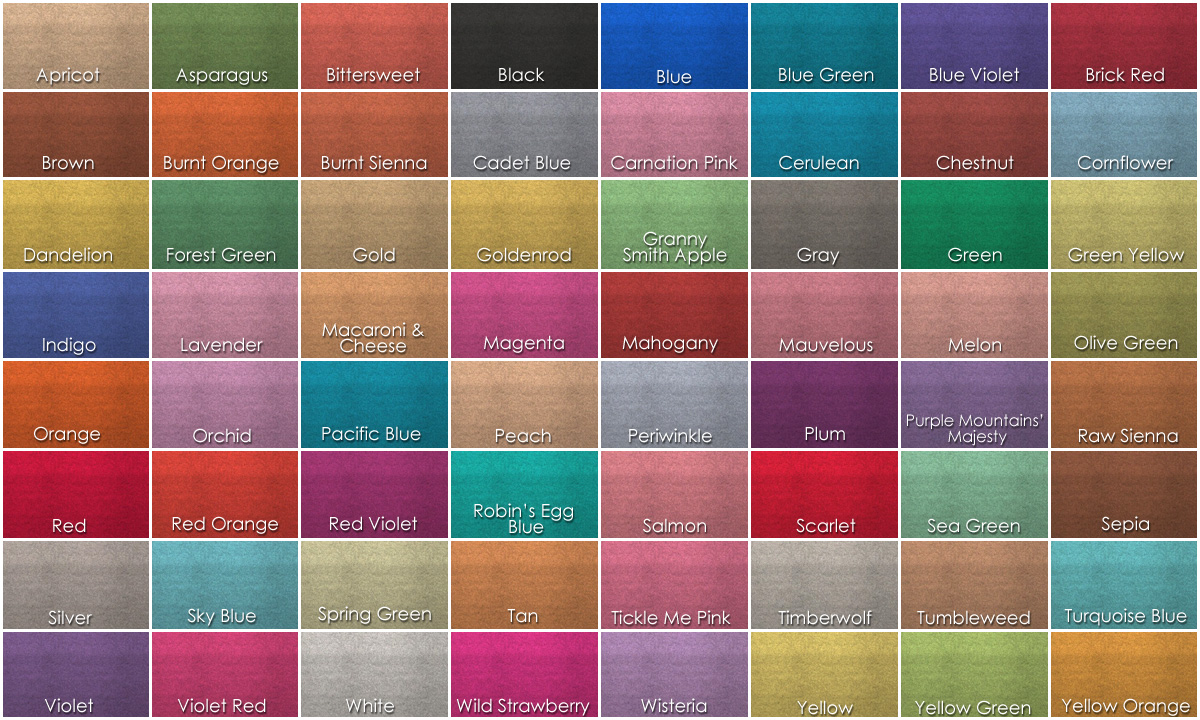 Some of the colors are pretty close in color, but they are all different. And sometimes you want just a shade darker or lighter than the color you initially pick, anyway. Some of these are really bright, though, and should probably be used sparingly.

These have all been renamed so that you can tell what's what. No more Homecrafter gibberish. The files have been compressed, although that doesn't do much for floors. They can found in the *gasp!* carpeting section of Build Mode, and they cost $2.

Also, I remember that when I was making these, I kept wanting to type "Crapola" instead of "Crayola" in the title field in Homecrafter.

So I apologize if any of them actually have that as their title. They're not crappy! I promise!

Credits:
Crayola, of course. I actually hated to color when I was a kid, which everyone thought was bizarre. When I was forced to do it, I had a penchant for coloring EVERYTHING in Raw Umber. That was my badass, passive-aggressive kindergarten anti-coloring protest. Turns out, Raw Umber has been "retired" by Crayola. Now I feel ancient. And a bit bereft. Whatever will I do if I'm ever forced to color again?
Homecrafter, even though I hate the way it names files.
Adobe Photoshop CS2 is love.
Baked Oatmeal. Baked oatmeal is the food of the gods. I ate baked oatmeal, with blueberries baked in, while I uploaded this, and that's why these carpets are awesome!

Back to download view
54 Comments / Replies (Who?) - 8 Feedback Posts, 45 Thanks Posts
Hide Thanks Posts for this thread (Show only feedback)
Page 1 of 3
Siofra
Lab Assistant
THANKS POST
#2

These are so lovely! Thank you. I'm not even playing right now, but I'm getting these for when I get back into it. You picked a wonderful texture!

My life is complete now. Thank you! I didn't even know I wanted this, until I saw it. (: I don't think I ever had raw umber, but there were a few of the colors that I grew up with, that have since been retired. Anyway, I can't wait to put these in my sim houses!
Karen Lorraine
Constant Contestant
staff: moderator THANKS POST

These are gorgeous and as always I have had a giggle reading your upload text :D
lauratje86
Mad Poster
THANKS POST

I love these! :-) I checked out when Raw Umber was retired and apparently it was when I was four. No wonder I don't remember it! I feel weirdly young now :-D Thanks for sharing these, I expect that they'll get a lot of use in my game :-)
PenelopeT
Theorist
THANKS POST

Thank you for the download and the witty upload texts

Oo, these are awesome and necessary; I lovelovelove making brightly-colored houses, but tend to stick to wood floors or the 70s shag carpets because I don't like the textures or colors of other carpeting choices. I'm surprised there isn't a "raw umber" carpet, though :P

(And that's been retired? Now I feel old, too. There's probably still an old tub of crayons left over from when I was a kid down in the basement of my parents' house, complete with raw umber and rad 80s fluorescents.)

Edit: crayon name fail, I has it.
CatherineTCJD

*sniff* I always preferred Burnt Sienna to Raw Umber - but, they were both faves.

These carpets are nice and plush! I want to sink my toes right in! Thanks :D
Please ~ support my TS2 habit! Shop at my Etsy shops:

Your carpets make me want to build. And color something with crayons. :D
NanaWildflowers
Lab Assistant
THANKS POST
#11

Thank you for all the pretty new rugs. Wonderful colors
iCad

*cackles madly* Glad people like these. I now want to do other things in these colors, God help me...

@Siofra: I can has your baked oatmeal, plz? Well, less the almonds. I'm not a fan of almonds, unless in the form of almond milk, which I use all the time now that I'm vegan.

I guess I like the taste but not the texture.

@laurajte86: Yeah, 1990. 1990 was a bad year, for in that year the world was deprived of raw umber crayons. Swear, it was the best color. Well, the best color for making a protest statement, anyway, given that the color was roughly "poo brown." Which, of course, was why I picked it. I was a "clever" 5-year-old..

@Klaartje: Sorry, dear, but my goal is to make your Downloads folder explode. Yours, specifically. Because I'm a clever 50-year-old, too.

@Aegagropilon: We totally need stuff in the 80s fluorescent crayon colors! Eye searing neon things...Oh, wait, that stuff's already at GoS, isn't it? Ah well. Old news. *is now contemplating how to go about making a stash of raw umber crayons to keep for posterity, so that they may see the glory*

@CatherineTCJD: Well, fortunately for you, my dear, Burnt Sienna has not been retired. It's still as ugly as ever, however.

And apparently Macaroni & Cheese IS a color. So sayeth Crayola. Kraft Dinner: Now gracing your kid's crayon box and triggering subconscious cravings for neon-colored pasta products! It's a conspiracy!

@COEG: Do eeet! Both things. Maybe at the same time.

...Gee, can you tell it's getting close to my bedtime?

I'm mostly found on (and mostly upload to) Tumblr these days because, alas, there are only 24 hours in a day.
Muh Simblr! | An index of my downloads on Tumblr.
Justpetro

I am in love with the colours. Completely!!! Thank you

After a long time having had "old fashioned" and Victorian inspired rooms for my sims - I started to be more modern and colorful
half a year ago ... so these carpets are very much needed and welcomed in all my sims houses

Thank you so much

My favorite ones are Tickle Me Pink, Wild Strawberry, Magenta, and Silver!

I just want to say thank you for your amazing recolours and shares. They're appreciated!
Ether
THANKS POST
#17

This's so lovely Thanks!
gazania
Mad Poster
THANKS POST

Initially, I was looking through this palate, convinced I had a variation of all these colors downloaded throughout the years. "Blue .... check." "Scarlet ... check." "Granny Smith Apple ... wait. I don't HAVE a light green carpet?"

So thank you for allowing me to fill in some of these gaps. :)

Is this for the Sims 3?
KMRocky
Lab Assistant
THANKS POST

Thank you for all the colors, even the bright ones

These are so pretty! I can't wait to use them :)
Emmery
Test Subject
#22

These are great, and they resemble the texture of my carpet at home (in the non-Sim world). I like to add stuff like that to my buildings in the game, so finding this was so lucky for me!
In addition, you appear to have quite the personality, and I laughed while reading what you wrote (including your response to a comment here). Thanks for the joy you spread. I'm tickled as pink as a Wild Strawberry (oh that was awful ^////^; ).
~MadameButterfly~
Mad Poster
THANKS POST

Where is the furniture from, I love love love it!!
blythe0623
Test Subject
THANKS POST
#25