by MaclimesZero Posted 15th Sep 2014 at 3:16 PM
55 Comments / replies (Who?) - 9 Feedback Posts, 16 Thanks Posts
This is a Maxis Recolour which means that it is a recolour of an item that already exists in your game. Please check the Expansion pack requirements to see which game pack it recolours.
Welcome to the first in a series of Star Trek: The Original Series creations! First up: the standard male uniform top. This big set includes all three colors, with all 11 possible ranks (for a total of 33 combinations). Get ready to explore space with the crew of the USS Enterprise!

There is a single, new thumbnail that contains all 33 variations of the shirt. The individual swatches are organized by color and by rank, as shown in the image below: 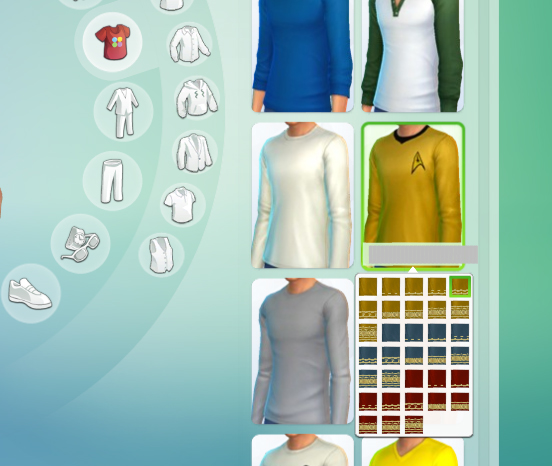 Need more information?
Back to download view
55 Comments / Replies (Who?) - 12 Feedback Posts, 41 Thanks Posts
Hide Thanks Posts for this thread (Show only feedback)
Page 1 of 3
GothicCupcake
Test Subject
THANKS POST
#2

All of my yes! Thank you!
geoffreypa

This... this is amazing! Thank you so much!
Mekell
Test Subject
THANKS POST
#7

Wow, I always wondered about the rank system in the original Star Trek. I can't believe you know this! Love it!
AidanEngel
Test Subject
THANKS POST
#8

Thanks gang! I'm working on a female version as well (the skant, like Uhura and Chapel wear), but I'm stuck at the moment with the normal map of the item I cloned. As soon as I figure out how to clear that (or someone tells me how), I'll be submitting them for upload.

Thank you so much!! I just can't wait for the female version! :D
Enki

For now I´m not planning a Start Trek neighborhood, but my sims might want to become Trekkies now. Would you mind making these shirts available for females, too? I always wore trousers when I still attended conventions and I wasn´t the only one doing so.
GElliot
Test Subject
THANKS POST
#12

So cool, thank you!
Hayran
Lab Assistant
THANKS POST

You could also put on costumes/fancy dress too.
Tamas
Field Researcher
THANKS POST
#14

This is really wonderful and I'm looking forward to more. Thank you!
Zovesta
Lab Assistant
THANKS POST

=o Awesome, thanks so much! All the trouble you went to for the rankings too, dang... as a lover of the original Star Trek series, you've made me way too happy! <3
The Star Treker

They look awesome! Great detail of the costumes! I hope you can make the outfits from The Next Generation, Deep Space Nine, Voyager, Enterprise and the movies. And it would be awesome if you could make the astronaut suits look like the space suits from each show when they go outside of the ship. I'm probably asking for too much. Lol

I thought I would post pictures of the uniforms.

Star Trek The Next Generation (Season 1 and 2)

Star Trek The Next Generation, Deep Space Nine and Voyager

Star Trek The Next Generation (Movies and Space Suit)

I also have access to Spike's Star Trek Page.

But yes, I will eventually be expanding. Next up is female outfits (both as t-shirt style tops and as the longer skants). Then probably focus on the other clothing categories in the Sims: a dress uniform for Formal, exercise gear for Athletic, underclothes for Sleep, and I'll leave Party to be their "casual" clothes, I guess.

Once I've done the TOS era completely, I'll consider moving on to other eras.

Awesome, I love this ^^ Was looking around for some Trek stuff so this is great

Cool I wondered where you got the rankings from. Lol I hope you at least do TNG. TNG is my favorite era and TOS close second.

I also prefer TNG. But I love the idea of starting with TOS. It just seemed right. So... eventually!

YEAH! I realy like it! TNG is my favorit to I hope you di the old an the new TNG/Nemesis!
cupcakeonastick
Test Subject
THANKS POST

LOVE this! Can't wait for the female upload :-)
Simgirlybetty
Test Subject
THANKS POST
#23

wow this is a amazing idea you have . Thank a lot . thank you so much
threedeesix
Test Subject
#24

Awesome. Thank you for your hard work. I can't wait for the female uniforms. These will go great with my Enterprise NCC-1701 "house".
sacha15
Test Subject
THANKS POST
#25