Mod is updated to V3. In V2 there was an issue with male lips where the YA had fuller or thicker lips than the teen or adult; this is repaired. Female hips become wider when aging from YA to Adult and again to Elder (this is by design from EA, it is not a 'bug' or 'glitch' if this is what some players think). Wider hips on the adult female is reduced in this V3 so it isn't as noticeable. With the male jaw the V3 allows for larger randomization when creating the Townies on jaw width and jaw upwards (giving a shorter jaw and chin sometimes). These were both reduced to minimum because of the WideJaw issue; the previous mods went overboard on this, which is unnecessary.

V2: Mod is updated to V2, fixing the issues described in the comments. The face being pulled forwards, but then hopping back when aging up or down is fixed. The lips becoming fuller (or not) on female sims when aging is removed. (The elder female still has the thinner wrinkled lips just like the elder male.) The eyebrows lowering on male sims when aging up is removed. The cheeks on male sims becoming gaunter along the side of the face is reduced on adult males, so the difference in face shape between YA and Adult males is not as large. The male jaw and chin can be moved down further by the randomizer, just as was done for females in the V1 version.

Original V1: This mod fixes the issue from the Oct.1st update with YA male sims acquiring the wide jaw and squinty eyes when aging to Adult and Elder, or down to Teen. Also fixed of course in Live Mode with all aging on males. Aging will be as expected previous to the patch. Below is a random male from CaS created as YA and aged up and back down to teen. This sim is untouched by me, no dragging on his chin or earlobes or anywhere else. I hit the randomize button, simple; then the age buttons, simple. Teen is to the left.

If anyone requires "before" screenshots of the wide jaw issue, there are plenty in this thread: http://www.modthesims.info/showthread.php?t=537709

The randomization choices or values when random sims are generated into a game are also altered in many places, for example the female jaw and chin are able to lengthen such that all females will no longer be the chinless wonders. Another example is settings on the nose, where nose width and flattening the nose and turning up the tip of the nose were all set at 0; the consequence being that the preset noses in CaS could be chosen, but wouldn't be pushed or pulled this way or that way (according to me) to create enough variation between one sim and the next one. Below are six female YAs using the randomize button, I have not touched them otherwise. Others with lack of chin will also appear, these six are not six in a row, I'm simply showing here that variation can occur. 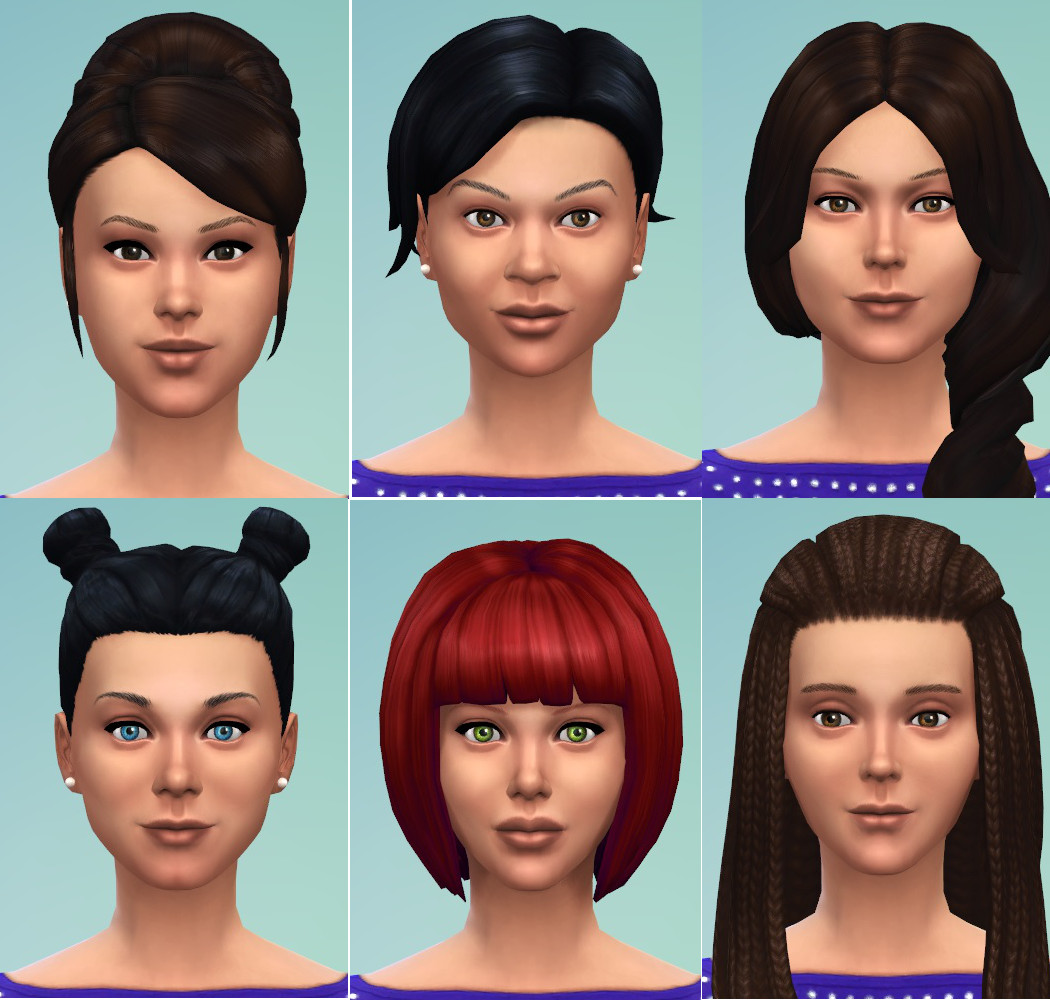 The files with settings on the child are not included in this mod, children will be EA vanilla, created based on the genetics of the parents; but here is a screenshot of mother and father with two "play with genetics" children with my mod installed.

Thanks to lewisb40 and Jenn for testing.

Need more information?
Back to download view
158 Comments / Replies (Who?) - 80 Feedback Posts, 67 Thanks Posts
Hide Thanks Posts for this thread (Show only feedback)
Page 1 of 7
mattific
Test Subject
THANKS POST
#2

OMG Thank you so much!
MsPhy
Test Subject
THANKS POST
#3

I am glad my topic was useful and eternally grateful you fixed the issue!
scumbumbo
Deceased
THANKS POST

THANK YOU so much!!!!
lewisb40
Mad Poster
THANKS POST

Now I can play through and not worry about the Screw-The-Pooch October 1st patch when sims birthday come around! Yay! Thank you very much Shimrod! I am afraid what EA's fix will look like cause they said they were trying to fix the gender differences, look at the mess they left us with. SMH
candacec92
Test Subject
THANKS POST
#9

You've just made my game playable again! Thank you so much

Incredible! Thank you so much for not only fixing our squinting square men but also our bland, chinless women. Myriads of thank-yous!
sarahzsmylz
Test Subject
THANKS POST

Thank you, you are rapidly becoming my favorite fixer! :-)
Esmeralda
Mad Poster
THANKS POST

Excellent, thank you for this fix!
ooie63
Test Subject
THANKS POST
#15

Thank you so very much! Now Don Lothario's kids can age and not look like monkeys!
itay.natan.47
Test Subject
THANKS POST
#16

tank you so much you are awesome

Thank you a million times over. Yay! Now I can finally play my game again. I had stopped because I didn't want to mess up the genetics for my sims.
graciousgrover
Test Subject
THANKS POST
#18

you are the best! This is great
ReubenHood
Test Subject
THANKS POST

Fantastic! Thank you, very much!
Celia
Field Researcher
THANKS POST
#23

Thank you so much for this.