by plasticbox Posted 2nd Aug 2015 at 6:33 PM - Updated 14th Sep 2015 at 11:27 PM by plasticbox
53 Comments / replies (Who?) - 10 Feedback Posts, 15 Thanks Posts
These are overrides for some of the garden plants that give them different meshes and custom textures, for more variety. The wild-growing variants are also included in each package (changes are identical). This is not a complete overhaul, it only contains those plants my sims currently have which were bothering me most. 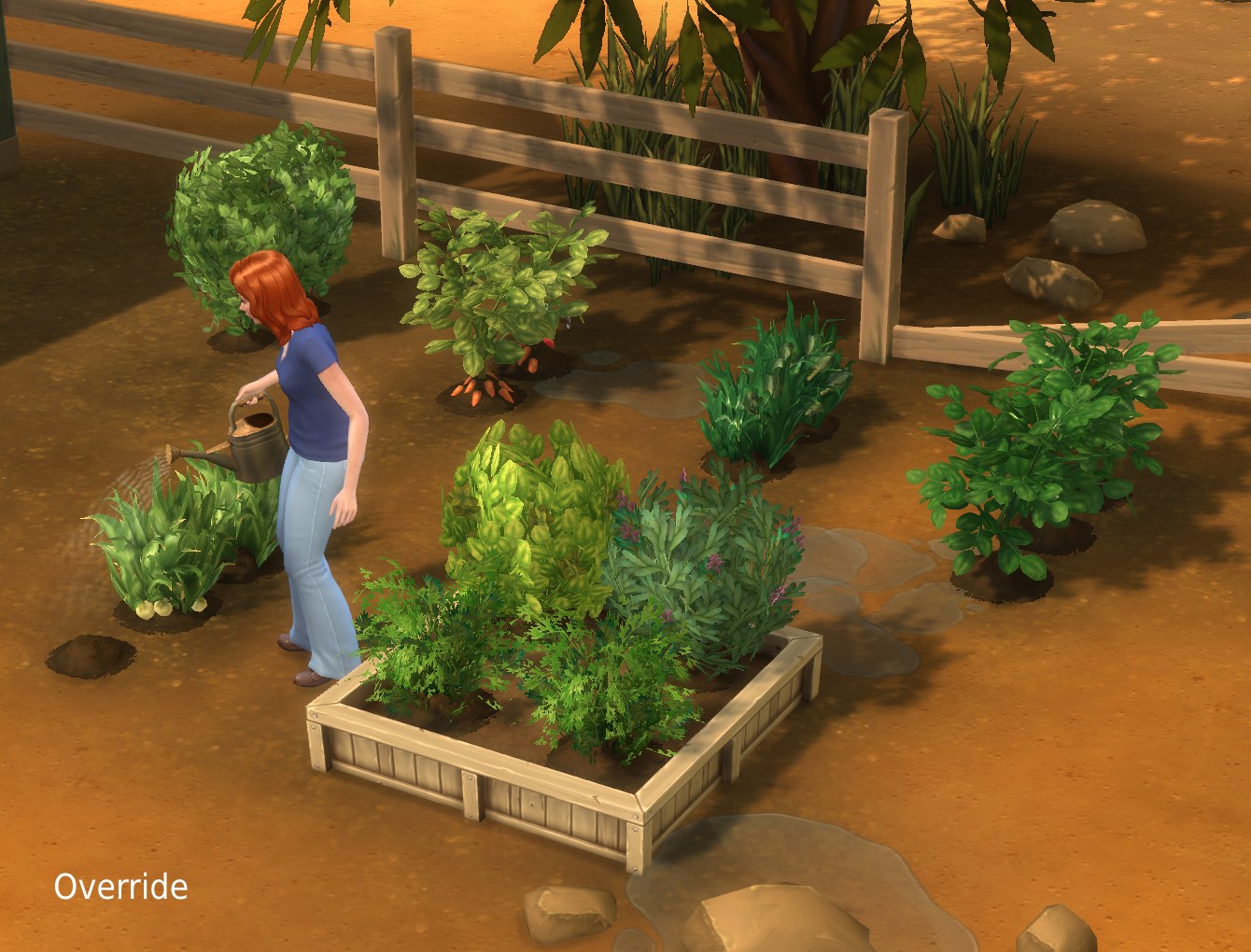 Need more information?
Back to download view
53 Comments / Replies (Who?) - 24 Feedback Posts, 27 Thanks Posts
Hide Thanks Posts for this thread (Show only feedback)
Page 1 of 3
Simmiller
Rabid Recoloring Renegade
retired moderator THANKS POST

This is amazing! Thank you so much! You have no idea how much all those identical plants bothered me.
parkjoonho
Field Researcher
THANKS POST
#4

These are beautiful!! Thank you very much.
crystalbluefire09
Lab Assistant
THANKS POST
#6

Thank you! These look amazing! As someone who gardens in real life, those plants were really bothering me.
FakeHousesRealAwesome
Field Researcher
THANKS POST

Awesome! I hated that they all looked so same-y and fluorescent green. This is so much better.

(and thanks for the heads-up about putting harvestables in your pots. So cute, and I never even thought to try.)
Kittifizz
Lab Assistant
THANKS POST
#8

I sat and flipped back and forth between the original and the overrides like a million times. It is SO much better. Seriously. Please consider doing the rest? :D
heidi137
Instructor
THANKS POST

I love this thank you so much!!!!
aberrantanecdote
Lab Assistant
THANKS POST
#12

these look great. one question; are they compatible with the buyable herbs and flowers (made buyable by oloriell: http://modthesims.info/d/549339)?
plasticbox
Pettifogging Legalist!
retired moderator

Since the description of that upload doesn't say anything about overriding stuff, I can only assume that those are clones. I don't really know of course, I don't use that kind of thing.

Can't you simply get the harvestables from Buy/Build when you turn on debug mode or whateveritwas? Those would be the actual harvestables.
Stuff for TS2 · TS3 · TS4 | Please do not PM me with technical questions – we have Create forums for that.

In the kingdom of the blind, do as the Romans do.
Sheph
Test Subject
THANKS POST
#14

I always wanted my plants to look better. Thanks.
aberrantanecdote
Lab Assistant
THANKS POST
#16

i think they are just clones. i will see if this mod works with yours, and if not, i'll remove that mod and just get them using bb.showhiddenobjects. thanks very much for your response.

If that "buyable" mod is overriding these so they stop appearing at all, that would mean it contains redundant copies of the original cobj/objds -- wouldn't be the fist time people override something unannounced, but the creator should be made aware of it as they probably don't even know about it.

If you just mean this mod changes the appearance of the Maxis plants just fine, but not that of random other CC .. well yeah, that is to be expected. It's not supposed to change anything else.
Stuff for TS2 · TS3 · TS4 | Please do not PM me with technical questions – we have Create forums for that.

In the kingdom of the blind, do as the Romans do.
aberrantanecdote
Lab Assistant
THANKS POST
#18

my apologies for being vague: with that mod installed, your textures still work on the default herbs and vegetables, but not on the buyable clones that mod adds. sorry for my lack of technical knowledge; i'm a total mod noob.
Martine

Thanks for this lovely mod - gardening is one of my favourite things in the game and I hated how nearly all the plants looked identical!

I do seem to have a small issue, the harvestables seem to appear very dark? Here is a picture:

This mod doesn't modify the harvestables (also, it does not contain a rose bush). Does it also happen when you remove all other CC?
Stuff for TS2 · TS3 · TS4 | Please do not PM me with technical questions – we have Create forums for that.

In the kingdom of the blind, do as the Romans do.
Martine

My apologies, I hadn't looked at the garden plants for ages and I just noticed it after putting in the mod. I took all my CC (including this mod), deleted all cache files and the harvestables are still very dark, so it looks like an EA issue!

EDIT: I asked about this on Tumblr, and it seems the latest patch broke the harvestables.
plasticbox
Pettifogging Legalist!
retired moderator

OK; thanks for the clarification!
Stuff for TS2 · TS3 · TS4 | Please do not PM me with technical questions – we have Create forums for that.

That is good to know .. have you tried playing with your graphics settings? They do talk about messing around with shadows in their patch notes, but maybe one can counteract that by changing the rendering settings.
Stuff for TS2 · TS3 · TS4 | Please do not PM me with technical questions – we have Create forums for that.

I've got exactly the same thing. I also thought it was something to do with Plasticbox's mod, but I also installed the latest patch at the same time. Like you, after removing CC, deleting my cache files and repairing my game, it's still there. To me it looks like the patch has 'erased' all the textures on the harvestables so that they just look black.
plasticbox
Pettifogging Legalist!
retired moderator

Yes, that is a patch issue. Here is the bug report thread: http://answers.ea.com/t5/The-Sims-4...-unread-message
Stuff for TS2 · TS3 · TS4 | Please do not PM me with technical questions – we have Create forums for that.