by plasticbox Posted 2nd Jan 2016 at 7:34 PM - Updated 22nd Feb 2016 at 1:23 PM by plasticbox
64 Comments / replies (Who?) - 12 Feedback Posts, 13 Thanks Posts
These are some recipes that let sims prepare the Maxis cupcakes in their oven, instead of having to use a cupcake machine. You also need to download the updated Custom Food Interactions from this thread in order to have the interactions available. 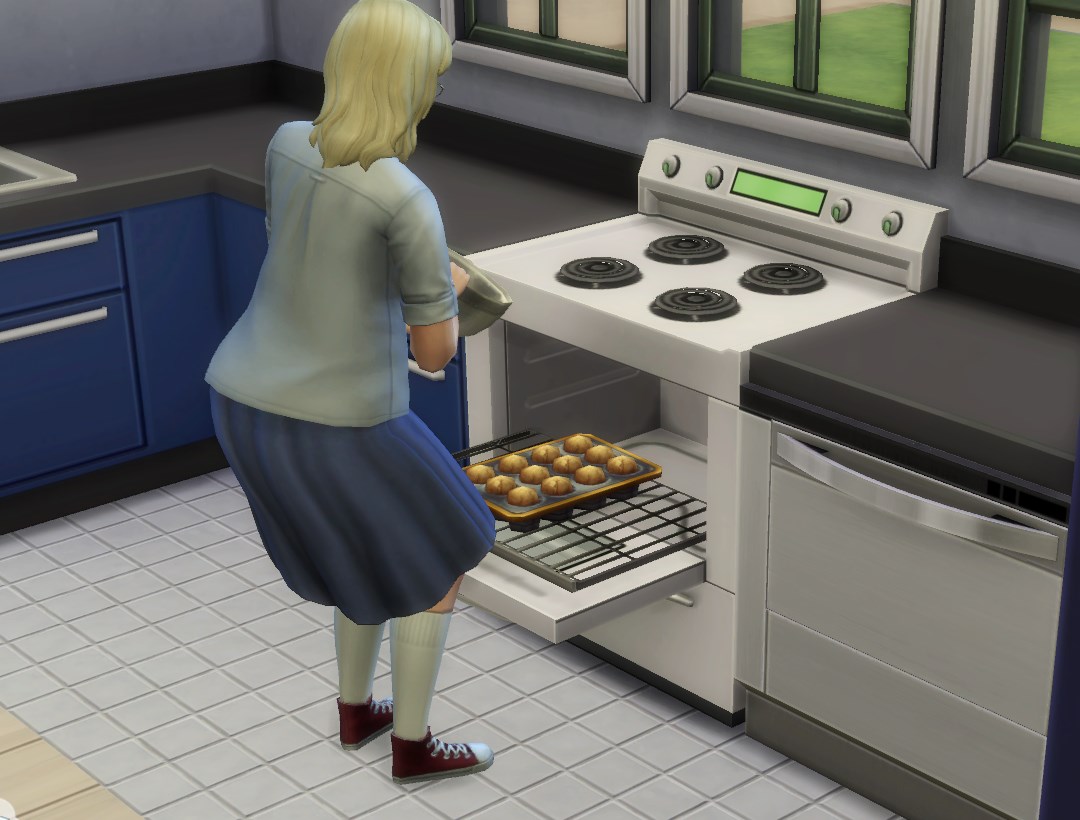 Some of the cupcakes require a little bit more skill than if you’d use the cupcake machine, so the machine is still good for something. The Carrot Cake and Strawberry Fizzy variants require ingredients (carrots and strawberries). All cupcakes are available from the Serve Dessert and Custom Food menus (both are part of the Custom Food Interactions mod; Serve Dessert is available between 11AM and 2AM); sims can autonomuously make them as well.

Need more information?
Back to download view
64 Comments / Replies (Who?) - 31 Feedback Posts, 32 Thanks Posts
Hide Thanks Posts for this thread (Show only feedback)
Page 1 of 3
eman72
Instructor
THANKS POST

Thank you so much I love cupcakes but I hate using that over sized cupcake machine.
deadrun
Test Subject
THANKS POST
#3

You are a scholar and a gentle person.
gyrobot
Field Researcher
THANKS POST
#4

I love all of your custom food recipes so far. Thank you!! :D
KiwiChristine
Test Subject
THANKS POST

My Sims don't make cupcakes because I hated that oversized cupcake machine so much - Thank YOU!!!!! {off to bake}
Apsalar
Scholar
THANKS POST

Yes, finally I can bake cupcakes.

I never used the big clonky cupcake machine, and now I don't have to.
dtw
Field Researcher
THANKS POST
#8

Thanks, Hated putting them in the Bakery, the sim don't make any money on them.
lewisb40

Not a big deal, won't stop me from trying this out.
Resident member of The Receptacle Refugees
Let's help fund mammograms for everyone. If you want to help, Click To Give @ The Breast Cancer Site Your click is free. Thank you.
Green Yeti
Test Subject
THANKS POST
#10

No, the oven cupcakes are regular food.
Stuff for TS2 · TS3 · TS4 | Please do not PM me with technical questions – we have Create forums for that.

In the kingdom of the blind, do as the Romans do.
SAGGG
Field Researcher
THANKS POST
#13

Thank you for this.

Here's my translation (based in the cupcake machine) for this fantastic mod!

Thanks for make this!

PD: Include a optional "Chocolate pudding" (explanation in notepad).
lewisb40

OK thanks. Still a great mod and thank you.
Resident member of The Receptacle Refugees
Let's help fund mammograms for everyone. If you want to help, Click To Give @ The Breast Cancer Site Your click is free. Thank you.
plasticbox
Pettifogging Legalist!
retired moderator

Thanks for the translation, that's very nice of you =)

In the English version I replaced the strings on purpose though, so that it says e.g. "Vanilla Cupcake" / "Vanilla Cupcakes", instead of just "Vanilla" -- I guess "Pastelito" means "Cupcake" and "Pastelitos" is "Cupcakes" (plural), is that correct? So can I use

or do the former two sound funny somehow?

(This is because there is no "Cupcakes" menu on the stove, and it looks weird to select "Make Dessert" > "Classic Vanilla" .. from that you can't tell it's about making cupcakes at all)
Stuff for TS2 · TS3 · TS4 | Please do not PM me with technical questions – we have Create forums for that.

In the kingdom of the blind, do as the Romans do.
deannagaige
Test Subject
THANKS POST
#17

Make sure your ovens and fridge are base game and Cool Kitchen. Otherwise it doesn't work.

Also make sure that Script files are ticked on in Game Options.
Resident member of The Receptacle Refugees
Let's help fund mammograms for everyone. If you want to help, Click To Give @ The Breast Cancer Site Your click is free. Thank you.
gato_24

Hello plasticbox!
I have the same problems and doubts when translating those names in spanish (singular and plural) ... I'm not convinced that the names given EA team in spanish ...
in Spain they have the mania to translate all the words in spanish ... I'm South American and say "cupcakes", not "pastelitos". xD

I re-edit to try to differentiate some flavors.
The flavor "Bocado de beicon" sincerely think it can be accepted in both singular and plural.
I hope it is pleasing to spanish users.

thanks for your notice!

PD: "Pastelitos de zanahoria" (plural) not appear in the STBL file, but if it appears translated into the game.

I also it does not appear in the game.
plasticbox
Pettifogging Legalist!
retired moderator

Again: did you download the interactions like it says in post 1, right at the top?
Stuff for TS2 · TS3 · TS4 | Please do not PM me with technical questions – we have Create forums for that.

In the kingdom of the blind, do as the Romans do.
Satureja13
Test Subject
THANKS POST

oh that was really my wish for a long time! thank you!
ElenaInTheSims

Hey pbox!
I've translated this mod into Dutch for you ^-^
Let me know if anything isn't right!