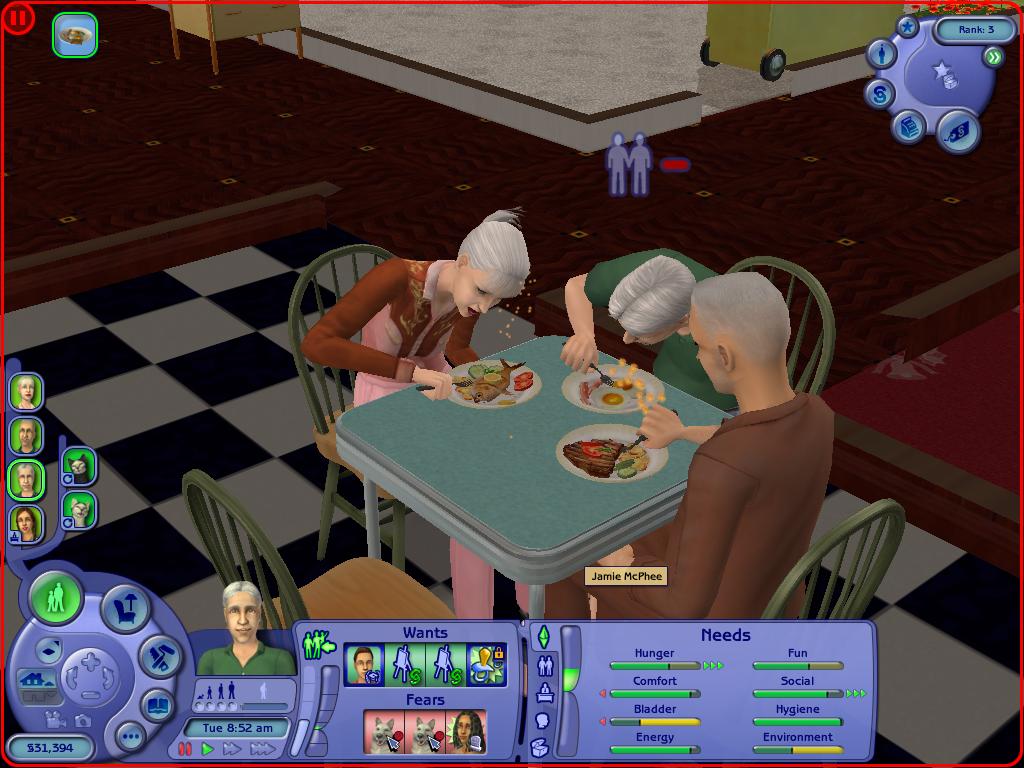 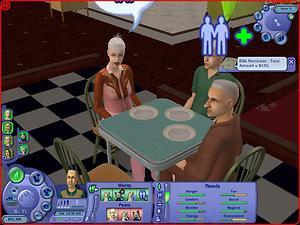 This is an update of my patch for NL which makes custom food disappear. There are two files and you only need one. They are:

foodgonepets.zip: This hack not only makes custom food disappear when eaten but also makes an extra option on the pie menu called "set state". This is especially useful with OFB.

This will do one of two things. If the food is ready to be served, it will flag it so that you can simply grab a plate. Why would you want to do this? Because serving will take time and mess up tables. Sometimes - but not always - it is better to let sims grab their own meal.

The second thing it will do is the opposite. If you already have the option "grab a plate" it will change it back to serve. That way you can dish up again if you so wish or maybe you're just selfish enough not to let the sims have seconds.

Because food automatically gets served, you'll have to use the OFB's "Make" interaction. That way the sim will place the food down unserved.

EDIT: And now it's back...V2 of the "set state" hack. I made an embarrassing mistake and it is now fixed. Feel free to download it or continue using the version without the extra options.

20062311: I am replacing the second hack with v3. v3 no longer has the problems but I still need to get people to test it for me. For those of you who would like to help me test it out, please download foodgonepetsV3.zip and report any errors.

If you don't feel like testing, that's fine. foodgonepets_wo_options.zip has no bugs so far so it's a safe bet if you don't mind on missing out on the extra menu. As an added bonus, V3 "should" no longer display the state menu when unprepared.

Compatibility: I'm going to say this one requires all expansions because I have them all though I think it is fairly safe to use the foodgonepets_wo_options.zip version without all the necessary packs.

Back to download view
19 Comments / Replies (Who?) - 18 Feedback Posts
Lindzee

Very nice! Thank you. May I ask where you got the foods from that are in the preview picture?
Vampchick

do u need all the eps for the hack to work?
cathair2005
Field Researcher

Of course, I can't remember where I got them but I know they're available to the sims vault but I think you have to buy them now unfortunately ):

For the one that makes the custom food disappear, you shouldn't need any packs but the one I just took down which I'll place back up when it is fixed, maybe require pets and OFB???

I just put the other version back up. Test it out for me guys and let me know how it goes; it has the same features as the first one but with the added bonus of letting you "set state" of your meal to served or unserved.
Vicci

All of these foods are here on MTS2 I think, and they're by Exenem. Look in the food part.
Garden of Shadows; for your goth side.
lobstergirl

Thanks for the update, I love this mod.
Check out my Sims 2 downloads!
discordkitty

I just want some clarification. There are some foods with custom animations that work properly and disappear from the plates - this will have no effect on them, yes?

Also does this mean I can now go and download some pre-ofb foods (I removed them all because I hate it when food doesn't disappear from the plates as it's eaten) and it'll work like other fixed foods?

I will definitely check this out with the custom animated foods. I don't think so because all it does is delete the food when consumed - which is actually a useless, invisible object.

Anyway, tell me about custom animations for food? Last time I checked in at the start of the year, there was no such thing.
discordkitty

When OFB was released it totally screwed up how custom food worked due to the changes in the game code. It took a while for people to figure out what to do and all custom food created prior to OFB no longer worked - it didn't disappear from the plates at all. However people have since figured out how to make food animate correctly (disappear properly while being eaten and leave empty plates) and a lot of newer custom food is created properly.
cathair2005
Field Researcher

Thanks for the update, discordkitty

Hi cathair. I'd like to give you a big thanks for updating this, because I have missed it very much in my game. I downloaded and tested the version 2 edition of this hack last night, and I ran into a few issues, however, I am using a few other hacks/mods (Casual Romance k, Insim Sim edition, and a few of Squinge's hacks) which might be contributing to the problems (which are very few). I have every pack except for FFS and GL if that helps solve the problem.

1. There seems to be a jump bug when my sims eat custom food that has all of the eating stages completed. If they happen to be distracted by something while eating, they'll jump out of their chairs.

2. If I direct a sim who is not home at the time to clean up the dishes, they'll magically appear at home, without their car, and you can't place a new one in its former spot.

3. If I have them clean up multiple plates (sometimes I want them to do something after they're done, but if I tell them to pick up one plate then shower, that's all they do instead of picking them all up) the action in their que will disappear, but reappears once I have them clean up one plate, then don't direct them to do anything else afterward. It's almost like they have a short attention span lol.

Other than that, I haven't seen any problems, and my custom food does disappear as promised

. Thanks for your time.
Biggest wishes for TS3:
Wider variety of harvestables and crops from TS1 & TS2 returning to the game
Wider variety of foods
More gems/metals/rocks/ore
cathair2005
Field Researcher

Thankyou, Iris. I really appreciate the feedback and will get to work to update and fix the bugs. I just noticed this, too, last night and thought "what have I posted?" lol. Yes, it seems there is an error forced when you click on an empty plate.

So tell me; which version did you use? The one with the option on the pie-menu or the one without (foodgonepets_wo_options.zip )? I'm just trying to isolate the problem. Thanks again.

Okay guys, as Iris pointed out, the hack has a glitch. But it is only the second hack so if you want to play it safe, get the hack without the extra options. I'm sure I know what the problem is having just figured it out as I've written so I'll repost it later.
~Iris~
Lab Assistant
#14

No problem cathair, I know a lot of work goes into modding things and creating hacks, so if you happens to have a bug or two, I don't think anyone will be terribly upset (unless their computer explodes or something like that lol). Besides, that's what the "in testing" label is for. Again, thanks for updating this. Have a great day :-).
Biggest wishes for TS3:
Wider variety of harvestables and crops from TS1 & TS2 returning to the game
Wider variety of foods
More gems/metals/rocks/ore
cathair2005
Field Researcher

Okay, the jumping bug should be fixed with V3 though Iris did state that there is a bug in that sims only clean up one plate at a time if distracted. I haven't tested this out but hopefully people will help me with the testing.
AbstractSIMmer187
Scholar

Okay can i just get this straight right, if i make a custom food like lets just say a new desert do i jutts dump that mesh file and the "fooddissapear" hack in2 the downloads folder for it to work.
AbstractSIMmer187 Has Retired From Sims 2 Creating
All Of My Creations Are Found Here
Ailias

I suspect this mod to deactivate "leftover" menu in Seasons. Could it?


PS My suspections were right.
I leave all mods but this one put away from Downloads folder and leftover menu appear as it should.

I agree with Ailias, we need an EP5 Version immediately. Besides, probably not much has changed in the game codes concerning foods (I hope...) and it should be a simple matter of adding the new EP5 menu options to the mod. But if it isn't, I still hope it won't take long to update, as I can't stand not having my custom foods disappear.

Here's what I know so far: When seasons was installed, I was stoked about the notion of leftovers, but when I entered a lot in which I'd had my sim whip up some unserved and served custom cakes and other custom and noncustom foods and then saved them from rotting by putting them in the OFB refridgerator display shelf--when I went to the shelf and withdrew the food, IT WAS USELESS! It couldn't even be interacted with, not even the non-custom foods, but luckily newly prepared foods could be interacted with. they no longer disappeared.

Surprisingly, your mod did not remove the "Put away leftovers" menu in my game. In fact, when I played Don Lothario's house (first lot played after seasons installation & incidently the one with the useless foods in the OFB shelves), it even successfully worked. But in every lot after that, it no longer functioned, the action just fading out of the sim's queue before even being initiated, and sometimes it would initiate, but the sim would just pick up the plate and set it back down again. I don't know if you should even go by my report, as my game tends to be a little bizarre, with features intact that should have been destroyed by mods and custom objects popping out of nowhere in the catalog that I'm 100% sure I didn't download (talk about twilight zone) and many other things. I'm not sure, I'll keep you posted on custom foods, however reliable you may view it, as they're one of my favorite kinds of custom objects.

I have seasons and I can not use put away left overs or compost bin with your foodgone wo options download. Thank you for your work.
LongTallSally

Does anyone know if this works with Bon Voyage (or if there is a similar hack for BV, if Cathair won't be updating this one again)?
Curiously enough, the only thing that went through the mind of the bowl of petunias as it fell was Oh no, not again. The Hitchhiker's Guide to the Galaxy, Douglas Adams

The Hunger Site - Click once a day for free to give food to developing countries!