by puppetfish Posted 4th Dec 2008 at 1:21 AM - Updated 14th Mar 2009 at 6:24 AM by puppetfish
18 Comments / replies (Who?) - 16 Feedback Posts, 2 Thanks Posts
In honor of JasonDuskey, and by his request, I bring you the tlhIngan hubbeq ~ Klingon Defense Force Career, with custom Uniforms and it's own custom Career Reward and it's own set of custom Icons! 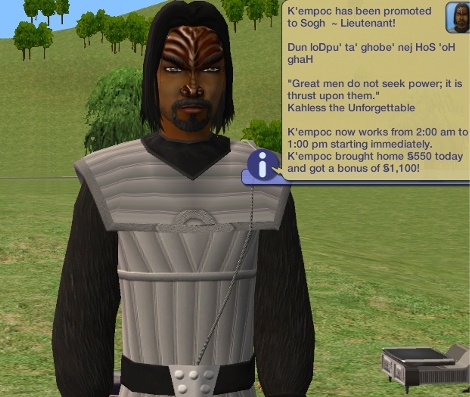 Chance Cards for all 10 career levels are complete! Will not overwrite any other career! Completely EP Compatible and has it's own GUID. (0x004D6A06)

For all of you Klingon linguistic experts out there, all of the translations are as close as I could get them, as there are just some English words that are not found in the Klingon language!

"The KDF is the miltary branch of the Klingon Empire. They are responsible for defending the empire's borders and for operating the empire's space fleet." info taken from the Star Trek Encyclopedia

**Special THANK YOU to NixNivis for allowing me to use her Klingon Uniforms found HERE! You must download her mesh and uniforms or your Klingons will go to work in their everyday clothes! (I put them into the same folder with the career) 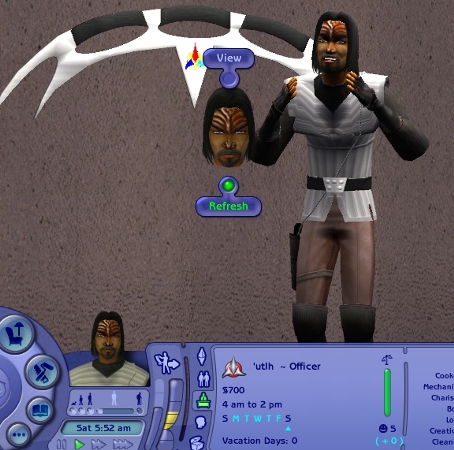 **Special THANK YOU to JasonDuskey who created the Custom Career Reward for me!!! The Sword of Khaless not only will bring you Honor and Glory, but will bestow it's refreshing power upon you as well!

File 1 ~ Klingon Defense Force - Base Game and EP Compatible
~this one does not have the career reward, but does use the uniforms.

File 2 ~ Klingon Defense Force - Pets and EP Compatible
~this one requires the Pets expansion for the Reward to show up. It also uses the uniforms.

**Just to let you know! In my game, the Reward never becomes available. I'm not sure why. It does appear in the catalog, but you have to use a cheat to make it available. I don't know if this is happening to anyone else, but every career with a Reward I've downloaded from MTS2 is doing the same thing! So if anyone knows how to fix it, let me know and I will update it!

But if it happens to you, then please follow the instructions included in the WordPad file in the career folder to enable the Reward! It's worth it, Jason's creativity is awesome!!

Do not read any further if you don't want to know anything about the career! If you like surprises, then don't read the below information!!

"We are Klingons. We do not embrace other cultures, we conquer them."
Martok; DS9; 'You are Cordially Invited'

"A friend may become your enemy before you can draw your dagger."
Unknown Klingon

"Great men do not seek power; it is thrust upon them."
Kahless the Unforgettable

"We are a proud race. And we...intend to go on being proud."
Azetbur - Star Trel VI

"I don't trust men who smile too much."
Kor; Errand of Mercy

"To be... or not to be... that is the question which troubles my people."
General Chang (Star Trek VI)

You will sleep Klingon style! We do not soften our bodies by...putting down padding."
K'Vada; Unification 1

"A leader is judged not by the length of his reign but by the decisions he makes."
Kahless, DS9

All the information was taken from various sites on the Internet and the Star Trek Encyclopedia.
HERE and HERE and a multitude of other sites. Just type the word Klingon into Google, and you will find them all!

Thank you to all the wonderful Creators of the tutorials here on MTS2! Without you, I would be lost!!

Back to download view
18 Comments / Replies (Who?) - 15 Feedback Posts, 2 Thanks Posts
Hide Thanks Posts for this thread (Show only feedback)
MistyBlue

Amazing, thank you so much!!!
Misty on Tumblr
Elephant

majQa'! This is absolutely the most awesome career ever written. I've been testing it since it came out and it's absolutely flawless. tIho', tIho', tIho'. Thanks again for doing this, sister

J
I'm no longer active here. My latest crestions can be found st:

Oh! Thanks so much everyone! This one was so much fun to do, and it took forever to get approved here, so I am very glad that it's up!!

And Jason! I am so glad that it's working perfectly!! I was a little worried about the career reward, but it's good to know it's not causing problems! Your welcome, since this career was inspired by you!
Want to see all my Sims 2 creations, including my Star Trek items? Follow the link below to check out my Blog!

Looking for Franny Sims Meshes? They can be found HERE!
Dominie
Test Subject
#6

This is great! Good work as always, I can't wait to download!
NixNivis

My Klingons will be singing songs about this glorious feat for generations! Qapla'! You have earned your place in Sto-Vo-Kor!
Anebrd
Field Researcher

This is just very very cool. Looks like it is very well thought out.
puppetfish

Thank you!!
Want to see all my Sims 2 creations, including my Star Trek items? Follow the link below to check out my Blog!

Looking for Franny Sims Meshes? They can be found HERE!
edejan

I finally got my new computer and I'm rebuilding my Star Trek neighborhood so now I can snag this great career. My Worf will no longer be an architect!! Yay, on to battle!!! Thanks!!
Nurkie
Test Subject
#12

I love this career. Only problem I have is that I can't seem to get the uniforms to work...

Did you download the originals? You'll find the link for them in the overview. You have to put the mesh in or they won't work.

Want to see all my Sims 2 creations, including my Star Trek items? Follow the link below to check out my Blog!

Looking for Franny Sims Meshes? They can be found HERE!
Nurkie
Test Subject
#14

It seems to overwrite my athletic career. :Sigh:
Any help?
puppetfish

Oh, that shouldn't be happening. I made sure it had it's own guid. Are you from a non-English country? If so, here is how you fix it!

With a special thank you to NixNivis, who figured this out and clued me in!!

And I quote from NixNivis

[This isn't a GUID problem - it's a language problem! There isn't anything wrong with the career per se, but if your game language is anything other than US English (including, but not limited to, UK English), your game will try to "translate" this career by grabbing the text and description from another one (Athletics, in my case). Which of course won't make any sense at all.

For this career to have its proper job titles/descriptions and chance cards, you'll have to add a "translation" for your own language (either by typing everything in yourself - phew! - or simply by importning the English text to your language, which is what I did). If you're SimPE literate, what you need to do is import everything under Text Lists from (US) English to your language - and that's even if your language is UK English. Feel free to PM me if you want more detailed instructions.]

I hope this helps!
Want to see all my Sims 2 creations, including my Star Trek items? Follow the link below to check out my Blog!

This looks very well made! The only problem I have with it is the Klingon language. You used Mr. Klingon's online "Universal Translator," didn't you? That thing couldn't translate to save a life. For example, "Death to all tribbles," would be Heghjaj Hoch yIHmey. With the exception of thlIngan Hubbeq and the rank names, all of your Klingon is actually gibberish and is little more than random syllables put together with no thought to grammar or meaning. This isn't your fault; it's the fault of the person who person who made the "translator." If you want, you can give me a list of all the words and phrases that you want translated and I will translate them into proper Klingon and you can put them into the file. If you really don't care about the language and just want something that looks Klingon-y for you mod, then write this off as a nitpick by someone passionate about Klingon linguistics. Again, great job on everything else, though. It looks awesome.
puppetfish
Field Researcher
THANKS POST

Thank you for your kinds words! I am glad you like it.

However, I did extensive research for all of the Klingon language, and most of the quotes and sayings are official Klingonese from the shows themselves. There were a few that I could not find, so I did use Mr. Klingon's translator for those.

While I appreciate your kind offer, I will have to say a firm no to having you "fix" my Klingon. LOL Unless you can prove to me that you have an official Klingon language degree and/or are one of the cast or writing members of Star Trek itself, I cannot verify the truth of your claim to know the "proper Klingon usage" and therefore cannot trust that your "fixing" would be any better or more proper than what I've already included.

It's not that I don't care about the language, it's the fact that unless you've created a career yourself, you have no idea how much work goes into creating one. To do a major overhaul like you're suggesting would require time that I do not have at this point in my life.

But thank you for your observations! I will keep them in mind the next time I create a Klingon career that includes language!