by Anubis360 Posted 7th Sep 2009 at 11:00 PM - Updated 7th Sep 2009 at 9:55 PM by Anubis360
38 Comments / replies (Who?) - 11 Feedback Posts, 3 Thanks Posts
Drew Blyth Barrymore (born February 22, 1975) is an American actress, film producer and film director. She is the youngest member of the Barrymore family of American actors. She first appeared in an advertisement when she was eleven months old. Barrymore made her film debut in Altered States in 1980. Afterwards, she starred in her breakout role in E.T. the Extra-Terrestrial. She quickly became one of Hollywood's most recognized child actresses, going on to establish herself in mainly comic roles.

Following a turbulent childhood which was marked by drug and alcohol abuse and two stints in rehab, Barrymore wrote the 1990 autobiography, Little Girl Lost. She successfully made the transition from child star to adult actress with a number of films including the unsuccessful Poison Ivy, Bad Girls, Boys on the Side, and Everyone Says I Love You. Subsequently, she established herself in romantic comedies such as The Wedding Singer and starred in the drama film Lucky You opposite Eric Bana.

In 1995, she and partner Nancy Juvonen formed the production company Flower Films, with its first production the 1999 Barrymore film Never Been Kissed. Flower Films has gone on to produce the Barrymore vehicle films Charlie's Angels, 50 First Dates, and Music and Lyrics, as well as the cult film Donnie Darko. Barrymore's more recent projects include He's Just Not That into You, Beverly Hills Chihuahua, and Everybody's Fine. A recipient of a star on the Hollywood Walk of Fame, Barrymore appeared on the cover of the 2007 People magazine's 100 Most Beautiful issue. 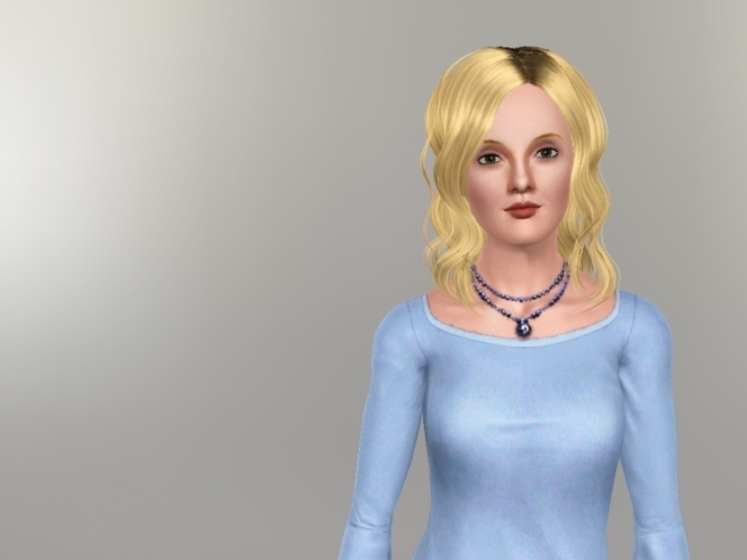 What Drew Needs To Work!
Skin by Aikea at Club Crimsyn
Hair by NewSea Sims
Eyebrows by daluved1 at MTS
Contact Lenses by me that are included in the download.

Please notice that you need to put the file "DrewBarrymore.sim" into My Documents\Electronic Arts\The Sims 3\SavedSims and the file "CustomEyes.package" into Mods/Packages folder.

Note: if you want to edit her facial structures, you'll need the AwesomeMod to do it without any problems.

Back to download view
38 Comments / Replies (Who?) - 33 Feedback Posts, 3 Thanks Posts
Hide Thanks Posts for this thread (Show only feedback)
Page 2 of 2
xstreetxsexiiex

Oh my gosh! You did it! You finally got her accepted! I'm so happy for you.

She looks amazing and I cannot see a flaw!
LucyG

As soon as I saw the sim I knew who it was. I have NO idea how you manage to make decent sims in the Sims3, mine are hopeless. Anyway good job.
JAKINCOL

I was wondering if anyone else is having a problem with this sim in cas. I had about 4 other sims made in the family, went to add her and clicked the check and then my sims game just crashed to desktop. this happened 2 times, both when i clicked the check to add her to the family, so I am sure its not anything i downloaded or my computer, i had made plenty familes before.

me too - crashed if i selected this sim

Quote:
You must install the hair then

how do i get the hair? its not working
Bain
Lab Assistant
#34

I always go by the picture to figure out who the sim is suppose to be and when I saw this picture I knew the sim is Drew Barrymore. Great likeness.
Pixie_Sim

Hi! I loved it. The only thing is that since the hair is no longer in the page it crash the game... Is it possible for you to re-upload it without that hair? Unless someone know where I can find it :D
stana
Lab Assistant
THANKS POST

Since I wanted her so bad to be in my game I just had to find the hair. Found it after quite some time: Just google this: "NewSea-SIMS3-yu000-coast-f" and you will find a link.
Great likeness!
owen10
Test Subject
THANKS POST
#37

thank u very much
alicezhouses
Test Subject
THANKS POST
#38

This is one of my favor actress sims. You captured Drew's facial looks very well. My Drew in game always ends up being a big flirt and the town tart with Story Progression. Thanks for the creations.
Munlyn
Test Subject
#39

Okay how do I even get this hair?!?