Closing Hours For The Bookstore

by joninmobile Posted 8th Jan 2010 at 9:17 PM - Updated 22nd Jan 2010 at 4:23 AM by joninmobile
12 Comments / replies (Who?) - 11 Feedback Posts, 1 Thanks Posts
Normally without this mod, the bookstore would be open 24 hours a day, 7 days a week. I thought I would give the poor bookstore workers a REST! Now you can choose (only one) set of hours you would like to see the bookstore open and close. I tried to make some reasonable hours that you would expect from a small bookstore. Even in real life, bookstores are never open all the time. So here's the different files:

I have World Adventures, if you have base game only you can test it out for me and let me know if it works in your game, I think it should, because I didn't see anything different that looked very World Adventuresy in any of the xmls, but just to be safe, it may not be compatible with the base game.

You should only download ONE of these files. Do Not Use Them All Together (of course). Enjoy! 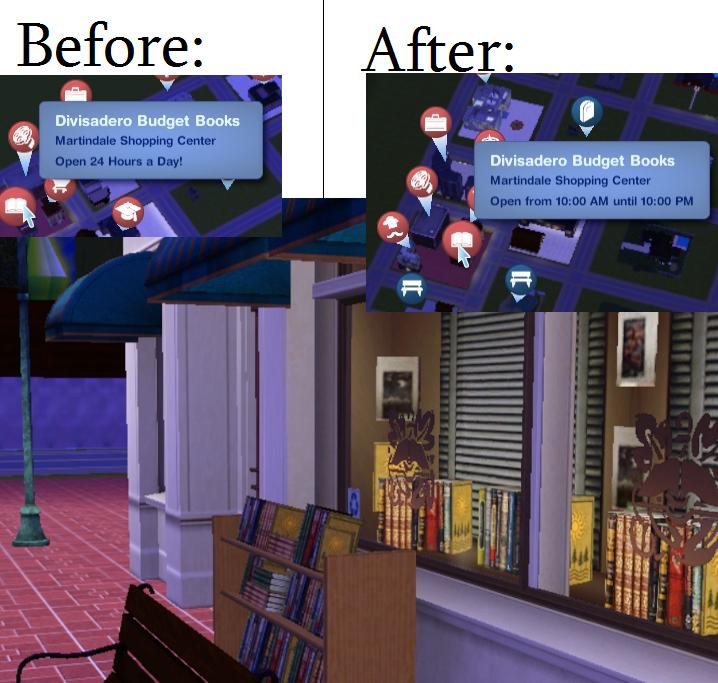 Built with Game Version: 2.3.33.003
Key: - File was updated after upload was posted
Need help with downloading or installing content? Click this link!
Don't forget to Thank the creator after downloading! Use the Thanks button located above the screenshots above.
Basic Download and Install Instructions:

See: Game Help:TS3 CC Basicswiki for a full guide!
Back to download view
12 Comments / Replies (Who?) - 10 Feedback Posts, 1 Thanks Posts
Hide Thanks Posts for this thread (Show only feedback)
Menaceman44

I'll give this a go.
Which version are you using in your screenshot though? You haven't got a 10am to 10pm version listed.
My deviantART, MTS Yearbook Origin ID = Alistu
joninmobile

I know it was a little quirk I made when naming the files, the moderators didn't catch it, I will update the post with the new name. The file for 10am to 10pm was named 10am to 8pm instead.

It was always disturbing me knowing that the bookstore is open at all hours of the night.

There aren't many kinds of publication that people purchase at those hours...
xstreetxsexiiex

Thanks for this, its much more better now.
best4bond
Test Subject
#6

This mod is one of the best for the bookshop
God Said "Let There Be NOOBZ!
Pink_Pwincess

Menaceman44
If you pay closer attention to the file names youll see this :
BookstoreOpen10amTo10PM_jimTNW.zip
hope this helps

Well done ! Im gonna have to use this!!
joninmobile

Actually, originally I had included a file with 10amTo8PM I had just renamed it wrong when making it, I edited this post to include the 10amTo10PM one.
NjFlash76

awesome. could you maybe do this for the grocery store too?
rsdworker
Test Subject
#11

The job start at 4pm to 7pm. If the bookstore is closing at earlier than 7pm, does the sims get reset or game crashes?

Is it compatible with patch 1.67?
LeeAlee
Field Researcher
THANKS POST
#13

I tested the 8AM-8PM flavor with game patch 1.67 using both a rabbit hole rug and Tammy's Spa & Books (ITF). It works as described. The bookstore in the combination rabbit hole had set hours, while the day spa was open 24 hours.

Then I had my Sims get part-time jobs at the two bookstores to test the 8AM-6PM flavor to see what happens when the bookstore closes at 6PM, and the shift normally ends at 7PM.
*Sim 1 works at the store with the rabbit hole rug. She left work several times during her shift, but remained on the lot. I sent her back to work each time she left. She continued working until 7:00PM, even though the store closed at 6:00. I'm not sure if her leaving was caused by the mod/rabbit hole rug, or something else.
*Sim 2 works at Tammy's Spa & Books (standard rabbit hole). He worked through his entire shift without leaving work. He continued working until his shift ended at 7:00PM, even though the store closed at 6:00.

Neither Sim was reset.

Love having a store with opening and closing times, thank you for creating and sharing!