The Box Of Seeds

Attention: This update comes with something called "critical signature change". That means the updated version of the box will not just snap in and replace old versions of the box! Instead all old versions of the box will be deleted! If you have anything in a box you want to preserve, make sure to sell all old boxes before you update!
2011-03-25 - Fixed an obscure issue. The box affected the lot worth in a really weird way. Once more I couldn't resolve something to my full satisfaction, but I can't set the box's sell price independently from its effect on the lot worth. So if you're a big fat cheater, you can put a box full with the bestest ingredients on a lot, remove the household and move a new household in without that household having to pay for these ingredients.
Also resolved an issue concerning the disposal (i.e. selling) of the box. I think.
2011-03-23 - Korean translation updated.
2011-03-20 - Korean translation added.
2011-03-11 - Traditional Chinese translation added.
2011-02-05 - Japanese translation added.
2011-02-01 - Version header changed to current code version. No code changes were needed, thus classifying this update as facultative.
2010-12-06 - Fixed an issue that caused certain items to be purged from the box's inventory on transition to a vacation world or back to the home world. The box i.e. its inventory and settings should now also survive a sim's export to the bin.
2010-12-01 - Version header changed to current patch version. No code changes.
2010-11-10 - Italian translation added. German translation revised.
2010-10-28 - New version won't crash the game when trying to buy the box. If you happen to meet an EAxian dev, tell him/her that I don't like him/her.
2010-10-27 - Updated to game version 1.17/2.12/3.8/4.5/5.2/6.0. Update is mandatory.
2010-10-04 - Czech translation added.
2010-10-02 - Polish translation added.
2010-09-07 - Updated version header to game version 1.15/2.10/3.6/4.3/5.0. No code changes were necessary.
2010-09-04 - French translation added.
2010-08-22 - Auto-Storing and Setting are now persistable (again).
2010-08-20 - Swedish translation added.
2010-08-17 - Dutch translation updated. Something I forgot: Known issues section.
2010-08-15 - This update comes with a massive code change. If you have a previous version of this mod in your game, I strongly suggest to empty and sell all BoxOfSeeds objects before you update. I didn't test what might happen if you don't do that, but you'll probably lose everything in the box's inventory.

I had to add a couple new strings. If any of the translators read this: Please update your translations. I uploaded a new source text file for the strings.

As always, massive code change comes with massive chance for new bugs. Of course I seriously tested everything new, but there's always a chance that I missed something. Please tell me if you notice any bugs.

The changes in short - more details in the main description
- The box can now be configurated to allow specific objects in its inventory.
- There's now a delay for the Auto-Sheltering so it will be called only once for every harvesting session. Therefore it will cause the lag on updating the inventory only once.
- You can rename the box now.

scope of this mod
Whenever sims do anything that consumes ingredients, like cooking or nectar making, the best ingredients will always be used first. That's fine most of the times, but not if you have a sim who is gardening. Then it becomes a real pain in the backside. You always need to preserve some of the best ingredients to plant them later if you don't want to restart with normal quality ingredients all the time. It's especially annoying for ingredients like life fruits etc.

Well, that is all in the past now. 2BTech presents you the Box of Seeds! Oompa Leastas (sort of like Oompa Loompas but without the singing and fancy clothing and positive attitude ... and without labor union memberships) handcrafted these little chests of the best discarded cardboard boxes with a minimum of delicate rotten fish fragrance.

usage
After you successfully installed the package to your mods folder, the Box of Seeds will be available in the buymode catalog in the Miscellaneous section of the Storage category (If you have WA: That's where the nectar shelves can be found). The price is 100§. 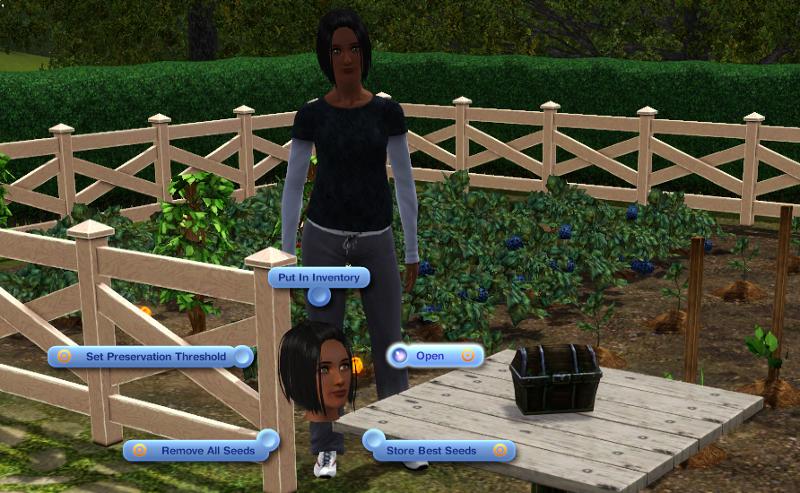 The interactions in detail:

- Put In Inventory
Your active sim will route to the box, pick it up and put it in his/her inventory. You don't actually need this interaction, since you can drag&drop the box in live mode.

- Open
This is same as for every object with an inventory, e.g. bookshelves, fridges etc.

- Set Preservation Threshold
Lets you change the amount of ingredients that should be preserved in the box. The default value is 5 and you can change it to everything in the range of 1 to 99.

- Retrieve Seeds From Household Inventory
When you sell a Box of Seeds while it still has ingredients in it, these ingredients will be moved to your household inventory which is available in buy mode. It's a real pain to get them out of there, because you have to do it one by one and and can't drag&drop them on a sim. This interaction will pull all ingredients out of the household inventory and add them to the box's inventory.

- Activate/Deactivate Auto-Sheltering Of Best Seeds
This interaction is only available if the box is in a sim's inventory, and it only works if the box is NOT set to allow everything to be added to its inventory. When you activate the Auto-Sheltering the box will pick the best ingredients from the sim's inventory every time the sim harvests a plant or picks up a seed. The logic is the same as in the manual Store Best Seeds interaction.

There's a delay of 6 seconds after the actual harvesting before the code becomes active. After that period of time, the initial harvesting action is finished, and the code can detect if any additional harvesting actions are in order. The purpose is to run the sheltering code only once for every harvesting session. However, if you save in these 6 seconds and end the game, the code will not catch up after reloading the savegame.

- Give Name to Box Of Seeds
This allows you to give the box an individual name. Might come in handy if you use multiple boxes for different stuff. Works exactly the same as for the stuffed animal.

If you are willing to translate, download the zipped text file at the bottom of this post and edit it with a text editor. Please be serious about your translation. I don't have the means to check these translations for grammatical or orthographical errors.

Only translate the stuff between the <STR></STR> tags or you will break the localization. Leave the {0.String} stuff unchanged. These are placeholders and will be replaced by the localization code, before the string is shown. You can freely move these placeholders to form sensible sentences though.

installation
There's an "Install Instructions" tab at the top of this post, right between the "Download" and the "Comments" tab. If you don't know how to install mods, then click on it and follow the lead to the very detailed Wiki article. Honestly, I can't explain it any better!

deinstallation
It basically goes like this: Remove the package from your mods folder. However, I would suggest to sell all Box of Seeds objects before you do so. If you don't do that, it probably won't break anything, but all stored seeds will be lost.

support
Please respect that I support my mods but not mods or even custom content in general, not in my upload threads anyway and certainly not if you ask me by PM. I will always try to find and squish bugs, therefore I appreciate bug reports. If one of my mods isn't working for you, please at least try to ensure that it's a failure of my mod before you ask for help. I am a compassionate guy, but please understand that I can only muster so much endurance to address issues completely unrelated to my mods.

Thanks to babele44 for using the box in ways I didn't anticipate and much valuable feedback as a result.

disclaimer
Might lead to a serious case of squished brain. Your game should be safe, though.
Tags: #gardening, #ingredients, #seeds, #storage

Built with Game Version: 6.2
Key: - File was updated after upload was posted
Need help with downloading or installing content? Click this link!
Don't forget to Thank the creator after downloading! Use the Thanks button located above the screenshots above.
Basic Download and Install Instructions:

See: Game Help:TS3 CC Basicswiki for a full guide!
Back to download view
275 Comments / Replies (Who?) - 201 Feedback Posts, 65 Thanks Posts
Hide Thanks Posts for this thread (Show only feedback)
Page 12 of 12
Workman
Test Subject
THANKS POST
#276