A Generations House: The Green Window 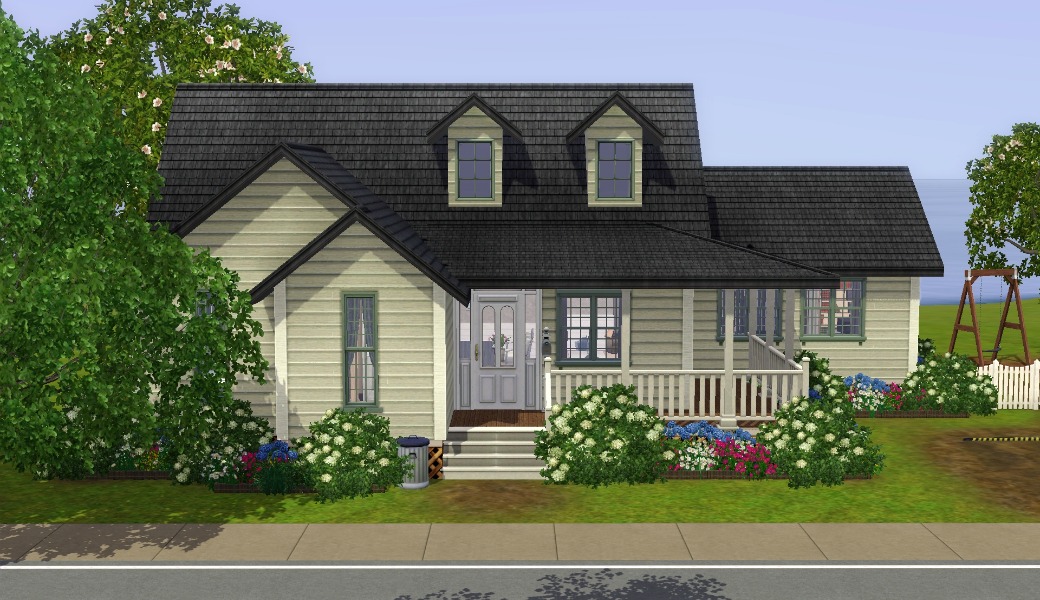 The house has only one floor. On the floor is an open livingspace with a diningarea and a kitchen seperated with a half-wall. There's a bathroom for the whole family, a masterbedroom, a second bedroom and even a third bedroom.
There's also a room for reading and studying, but it could easily be turned into a fourth bedroom if you have a bigger family.

The garden has a see-saw and a swing for the kids, loungechairs and also a picnikbence with BBQ for the whole family to enjoy.

Built with Game Version: 8.0.152
Key: - File was updated after upload was posted
Need help with downloading or installing content? Click this link!
Don't forget to Thank the creator after downloading! Use the Thanks button located above the screenshots above.
Quick Guide:

If you need more info, see Game Help:Installing TS3 Packswiki for a full, detailed step-by-step guide!
Back to download view
15 Comments / Replies (Who?) - 5 Feedback Posts, 9 Thanks Posts
Hide Thanks Posts for this thread (Show only feedback)
Bchbch Walk
Space Pony
THANKS POST

Glad to see it finished and uploaded. Nice Job

Very homey. Love the color choice. Can't wait to plop it down into my 'hood and try it out!
skankie_sim
Test Subject
THANKS POST
#5

This looks fantastic! Love it!
monosagrado
Lab Assistant
THANKS POST

I absolutely love homes like this. The floor plan is open which makes it very playable. Great job!!
xNikki

"And there will come a time, you'll see, with no more tears and love will not break your heart, but dismiss your fears." ~ Mumford & Sons
daluved1
Mother Function
retired moderator THANKS POST

This is going in my game, right nao!
xNikki

Whoah, my first picked upload!
I'm really happy at this moment. ;D
"And there will come a time, you'll see, with no more tears and love will not break your heart, but dismiss your fears." ~ Mumford & Sons
Johnny_Bravo
Alchemist
THANKS POST

Thank you Zandvoort. :D
"And there will come a time, you'll see, with no more tears and love will not break your heart, but dismiss your fears." ~ Mumford & Sons
TVRdesigns
Field Researcher
THANKS POST

Glad to see this approved! I see your lots all the time in CFF (which has me wondering why you don't give them some credit in your post, but, that is a different story) - good job!
xNikki

^ That's because I always forget that. (: So I will edit this post NOW and give credit.

Give me a slap in the face, next time I forget. ._.
"And there will come a time, you'll see, with no more tears and love will not break your heart, but dismiss your fears." ~ Mumford & Sons
Lezibeth

Hi, just wanted to let you know what the house looked like after my sims have been living in it for a while.

Here's a pic of my family, the Van Goulds - Bonnie, her husband Ayden (he lives long enough for a second chance!) and twins Sophie and Gwendolyn. The whole family is filled with geeks and they really enjoy playing video games together. The two furry friends aren't in the picture, sadly.

Their wedding. Ayden had to wait a while, because Bonnie went off to college. He proposed during her between-term break, but they decided to put it off until she had her tech degree in the pocket. His best friend Pip has front seats. As Bonnie and Ayden are both proper, they won't be getting any children before they say the magic words.

Playing with Gwendolyn when she was a toddler. Bonnie is cas-made and I decided to play without cheats this time. By now, we got 30.000 in cash and end-of-the-line kitchen equipment! woo. Didn't think it would be that easy. (The first few days I had a 'flower plucking career' just to pay the bills. That was in a different house.)

Birthday time! Gwendolyn has already grown up, so now it's Sophie's turn. Sophie is a sweet girl. She loves dogs, just like Bonnie, and is just so smart! Gwendolyn, however, well... she has a bit of an evil strike!

I hope you like the way I'm playing with your house. I have to admit I changed a lot, but I loved it so much (especially the foliage and the roof) I didn't want to play anything else.