by iCad Posted 23rd Nov 2011 at 3:08 AM - Updated 22nd Nov 2011 at 10:20 PM by iCad
21 Comments / replies (Who?) - 1 Feedback Posts, 20 Thanks Posts
This is a Maxis Recolour which means that it is a recolour of an item that already exists in your game. Please check the Expansion pack requirements to see which game pack it recolours.

So, Leesester asked if I'd recolored this door. (At least, I think this is the door she meant; the AL "Socialite" door. If not...Ooops.) And indeed I had recolored it already. So, I fired up the game in order to take pics and such to prepare it for uploading...and then I decided that I just didn't like what I had done with it at all. I'd simply recolored EAxis's textures flat-out, and they had created the textures such that everything on the door was the same color, from the frame to the hardware(!) to the decorative curlicue thingies on the glass insets. That, along with the flat, sort-of-metal-y not-graininess of the frame and the door panels themselves, just wasn't doing it for me in wood colors. I think the thing should be wood with brass trim. So, that's what I made it be, dammit!

It took me many hours to make it happen, mind you. (But that's OK; doing that sort of thing is what I call "fun," believe it or not.

) The texture image for this thing is rather...uh, cryptic, at least to me. It took me forever to find the stupid little square bit where the handle attaches to the metal plate behind it.

And then it took further trials and lots of error to make all the newly metal bits matchy enough in the game's lighting. But I think in the end it was all worth it, because this is what this sucker looks like now, with all 20 wood color options: 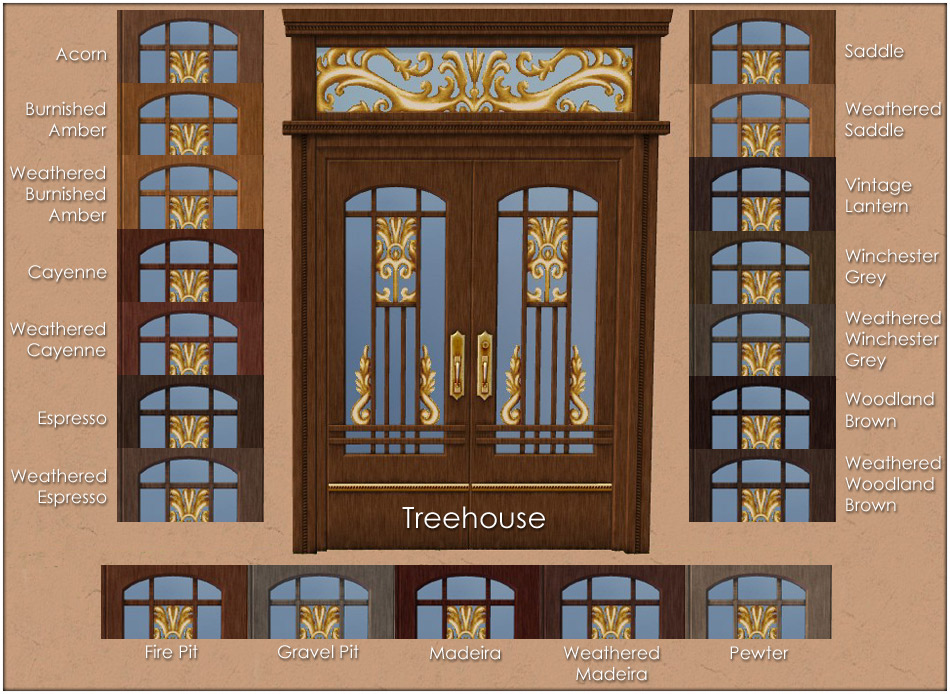 Me likes much better now. It's actually a very pretty door, IMO, but the EAxis textures are stupid, particularly because, as usual, they match absolutely nothing. (But now they match lots of stuff! At least, lots of stuff that I've made.

) Now, the only thing that bugs me about it is that there's a lock on the one door but not on the other. It looks dumb, especially because the "naked" door has the shadow for the lock because both sides use the same bit of the texture for the plate. :/ Unfortunately, I have zero meshing ability because I'm just a hack Photoshop monkey, so I can't fix that particular issue. But if there's an enterprising person out there who could fix it, that'd make me a very happy obsessive weirdo.

Leesester made some very nice single-tile versions of this door. I've linked to the set on the Related Pages tab. Honestly, I don't know how these will look on those...because I just downloaded her completer sets today.

(Before, I didn't use this door much 'cuz I thought it was ugly and the stone pediment windows didn't generally fit my building style...but I might use both the windows and the door now to build something very grand.

Oh! The metal bits I added, the hardware and the strip toward the bottom of the door, will show on the inside of the door, too, but the curlicues don't. Maxis made it such that the door only has curlicues on the outside, and that's another thing I have not the know-how to change, if it's possible to do so.

And finally! I'm thinking I might make a version of this with "wrought iron" trim and maybe another with a steely silvery kind of "metal." I could share such a thing if there's interest. Just be aware that that would mean you'd have a total of up to 60 recolors of this door, since the parts I made metal aren't actually recolorable and are just the result of me dissecting the stupid texture image and figuring out what bit of it goes where on the fully-rendered door.

But let me know if there's interest in other "metal" colors because if there is, I'll certainly share 'em when I make 'em.

Anyway, there she is. As always, the files are pre-Compressorized and are clearly named so that you can more easily trash the colors you don't want. I hope that you might find this useful.

Back to download view
21 Comments / Replies (Who?) - 20 Thanks Posts
Hide Thanks Posts for this thread (Show only feedback)
Honeywell
Theorist
THANKS POST

It's a beautiful recolor, iCad! Thanks for your hard work.

Oh, wow. Adding the brass works so much better than before! Great idea!
check out my Simblr. Mostly object recolors.
lucy kemnitzer
Scholar
THANKS POST

I'd be interested in the other metal colors. It wouldn't be that many files for me personally as I have picked out I think 5 of your colors to keep in my game.

The metal bits look really nice with your color on them!
leefish
Sesquipedalian Pisciform
retired moderator THANKS POST

I already thanked your LJ for these, but thanks again. I think they will work ok on my door as it is just the double door chopped in half and the frame repositioned/resized a bit.
BurgundyStars
Lab Assistant
THANKS POST
#7

Ooh, I like this. The door seemed nice looking but the Maxis colors always kept me from using it. Thanks for recoloring it!
++pixie++
Test Subject
THANKS POST

It looks so elegant, I can't wait to use it on my up market hotels, maybe even music halls, town hall if I ever build one, etc. Thank you

If you'd do the wrought iron versions, I think I'd faint from awesome-overload. I don't particularly like gold but these recolors are SO NICE. I promise I totally would d/l the black/silver if you'd be willing to put the time into it. Thanks again for your lovely work!

BTW, I kind of like there's only 1 lock. We had doors like this in one of my previous homes and it only had one lock to lock the doors together, never two.

These are gorgeous, iCad - thank you!

I love your door recdolors - all of them. Be it the OpenMe-door, Pigalle, Mauritania, Colonial - I used them all. Too bad I deinstalled TS2, and too bad your PC hates TS3, cos all of these surely are must-have items.

Thanks a lot for creating them.
AlanDPerrine
Test Subject
THANKS POST
#12

Extremely impressive recolours! I'd been wanting that door recolored, (and not the entire thing the same color) for a long time. So thank you very much! (I had to edit, I forgot the "K" in Thank)
MacApple
Field Researcher
THANKS POST
#13

How lovely. I will actually use these doors more often now.

Just a little FYI, for those who might be interested: I'm working on a black/wrought iron version of this. I'm running into difficulty making the handle hardware look black without it looking like just a blob of black.

But once I conquer the problem, if I can, I'll upload it.

Silver isn't a problem, though, and it looks pretty nice on the gray and "cooler" colors in the palette, like Vintage Lantern.

Thank you so much for sharing! I never use these doors, but now with your gorgeous recolors I have no excuses for not use it.

Improved 1000% (yes, I meant what I typed!)
Thank you, these are beautiful. When you get the silver and/or iron ones working, I'll get those too.
Thanks

When I saw this door, I couldn't tell what about it made in look so great. It never looks so nice in my game. Then I realized it was the brass curlicues. It makes the door pop. Very nice work! And thank you.

This Door is now Superb!!!!! and well worth all your hard work. It finally looks like a door of that type should and I love it. Will be keeping an eye out for the others if/when you post them.
Guest
THANKS POST
#21