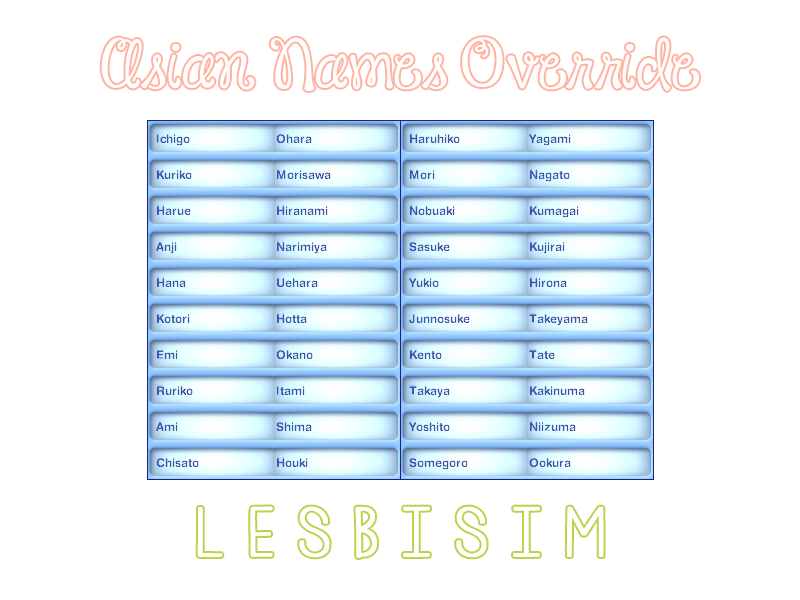 If you are of Japanese/Korean descent, fascinated by Japanese/Korean culture or just in search for something different for your game, this mod - requested by claudiasharon - is for you!

The Japanese & Korean Names Mod is an override, and will replace the default name lists in your game. This means townies, NPCs and sims created through Story Progression will have Japanese or Korean names, like the ones in the examples. I should clarify, the names are predominantly Japanese with a small amount of Korean thrown in for good measure. Credit goes to the incredible Remix for finding and compiling the majority of the names used in this mod!

This mod doesn't give existing sims new names (including any existing NPCs or townies, so I'd suggest using it in a new save), and you'll still be able to give any name you want to sims that you create in CAS (though, it does replace the names in the CAS random name generator). This means you can put the mod in your game when you're playing an Japanese or Korean themed town, and take it out when you want to go back to your normal towns.

This is a STBL override mod which replaces the strings in the FullBuild0.package (TGI:220557DA-00000000-000F16B00BA8342F), and is built to work with all languages. It should work with all versions/expansions, and is compatible with all core mods (though it conflicts with any other name-changing mod including my Berry Sweet Names mod and my Mythological Names mod). Simply place in your \Mods\Packages folder like you would with any mod and enjoy!

Built with Game Version: 1.50
Key: - File was updated after upload was posted
Need help with downloading or installing content? Click this link!
Don't forget to Thank the creator after downloading! Use the Thanks button located above the screenshots above.
Basic Download and Install Instructions:

See: Game Help:TS3 CC Basicswiki for a full guide!
Back to download view
48 Comments / Replies (Who?) - 26 Feedback Posts, 20 Thanks Posts
Hide Thanks Posts for this thread (Show only feedback)
Page 2 of 2
CRV13

I need to give out an apology myself as I do sound a bit adamant about the whole deal.

I do understand where you're coming from with your use of the word "Asian" which I would most likely equate to how people would use the terms "Black" &/or "White" to refer to specific races.

And I never even said "I dislike your mod", what I did say was "Great list of Japanese Sounding names by the way."

But some people assume so much just because of how they read your comment.
Miss Discordia

Wasn't that discussion on my mod? :P

And people, seriously, you know how HARD it would be to put names from all Asian countries here? And how do you think it'll look in game - for example mongolian name with indonesian or vietnamese last name? You should keep in mind that name mod creators CAN'T INCLUDE EVERY SINGLE NAME and that each mod must be THEMED in some way, to don't make ridiculous combinations...
lesbisim

I think so!
NinJa THEORY
Test Subject
THANKS POST
#29

Thank you very much! it very useful
FalseZen
Instructor
THANKS POST

This is very useful. Thank you SO much!
Kainsdaughter
Test Subject
#31

Sounds like an interesting Mod, so I'll have a look at it. And yes, a change of pace in the names will be nice.

As for the discussion that has been going on, and with all due respect to those involved, but I think nobody stated at any point that 'Asia' contains only the three named countries. But from a common understanding, they are part of what is understood as Asia.
And all those who are so outraged ... have you ever called someone a European? Maybe talked about things that happened in the EU? Should I be offended in that case? Because as of now, the EU consists of 28 countries, all with different cultures, ideals and ways of life and I can assure you that there are many with whom I have nothing in common. So ... it's just a thought on the matter.

And one last thing, quoting a text that is supposed to identify the 'fakes' who seem to offend a culture (in that case Japan), that in itself offends by using terms like faggot ... I don't know but it's a bit contradictory to me.

Anyway, thanks again for the mod with the 'less western sounding names'
Cheers,

Love this. But how to remove Korean names?
instantmagic
Lab Assistant
THANKS POST

I keep hoping you will make Irish names next! PLEASE.
sdc02277
Test Subject
#34

It seems there are only two Korean names here, and one of them can be considered Japanese. (Hana means "one"(하나 ) in Korean and "flower"(はな ) in Japanese. The words just happen to sound the same.)
So I don't think you would really have to worry about removing Korean names here

yes, I agree with sdc02277. Actually, there are no Korean names. They are all Japanese names. Although 'Hana' can be a Korean name, but all of last names are Japanese's. Probably it can make other people confused, who don't know well about difference of Japanese names and Korean's.
LaurenFobes
Test Subject
THANKS POST
#37

Most of the names are Japanese, but atleast now I don't have to look up Japanese names! So, thank you sooooo much!!!!! :D
robinvalentineb
Test Subject
THANKS POST
#38

Not all Americans who are into Japanese/Korean culture are "Weeaboos"
I think the main reason why she put Asia is because those are two countries in that continent. Im pretty sure
she knows that Asia is not just japan. Sorry if a sound a bit rude... it just got me mad that she was getting a load of crap from people...
can't you just enjoy the mod?
aplei389uyhkws

I suggest in your screenshot to also list the Korean names because I only see Japanese names listed. But its just a thought.
Googlelovesyou
Test Subject
#41

I thought it was an override to remove them so i thought it was racist at first then i was all like OHHH OHHH ITS TO GIVE NOT REMOVE.so my brain failed on that one.They do actually have some in the base game so yeah.
snowietig
Test Subject
THANKS POST
#42

Yay! I'm of Japanese descent and am really excited to refresh my game world with a little more variety. Thanks for your hard work on this!
darcey123
Test Subject
#43

This message has been deleted by parabee27.
Higureoneesama
Test Subject
THANKS POST
#44

I have no idea what is all the ruckus here,but I've come here to say a huge,even gigantic THANK YOU for this mod,as it would have been practically impossible to re-name all the sims in my japanese town.This mod is great and I cannot express just how thankful I am that you created it. ; v ; THANK YOU again! <3

Being part Japanese myself, I feel you have been sadly informed of Japanese names. What about all the female names that end in -ko? I am certain that you do not know about that as I did not see a kumiko, yoko, or mamiko or anything like that. As a challenging idea, why not make separate mods for, Japanese, Chinese, Korean, Taiwanese, Vietnamese, Filipino(half asian/half hispanic) or something to that effect? Just a suggestion.
jessim
Test Subject
THANKS POST
#46

Leave it to social justice warriors to ruin everything.

Is there a mod that can go with this to restrict physical characteristics of (random townie) sims sliders to an acceptable Asian range for those who would like homogeneity (like Japan) in our towns without having to delete or holocaust black sims, etc.
nyotakaa
Test Subject
THANKS POST
#47

THIS IS REALLY NICE. I WILL TRY IT... THANKS
carikawaii
Test Subject
THANKS POST
#48