66 Comments / replies (Who?) - 10 Feedback Posts, 7 Thanks Posts
Picked Upload! This is a picked upload! It showcases some of the best talent and creativity available on MTS and in the community.
I loved the hunt interaction for cats in Sims 1 and I was disappointed that they didn't get something similar in Sims 2 (too few pet interactions overall, but anyway ...). While expressing this dissatisfaction on the 'Hacks I'd like to see' thread, shortly after posting Phaenoh posted offering to help anyone who wanted to try and make any of the mods reality. Well, that was just demanding that I take the opportunity!

This mod will allow your cats to hunt those pesky roaches that hang around causing disease and frustration amongst your sims. The action is autonomous and appeals to the cat's fun motive. It raises fun and lowers hygiene (for playing with filthy roaches). 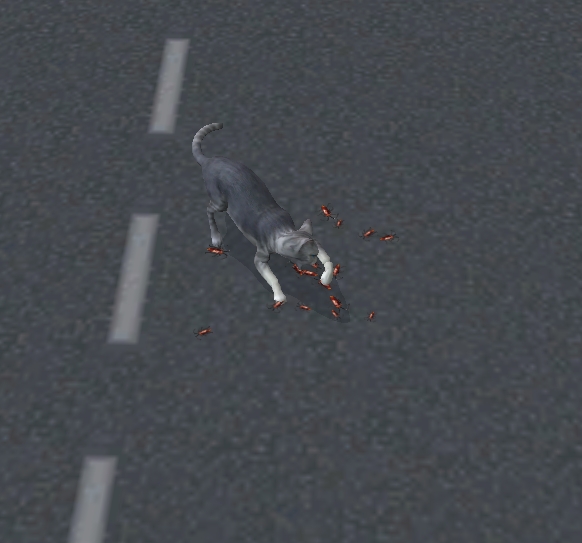 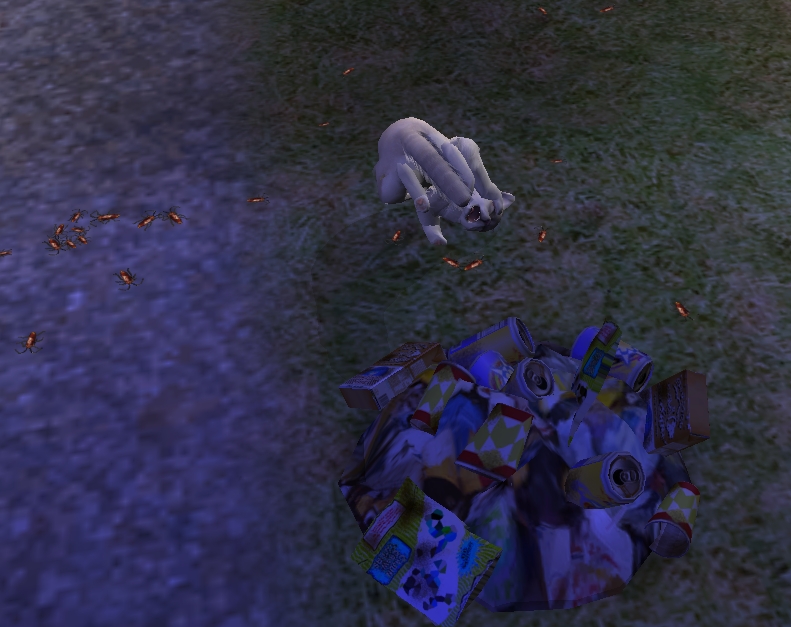 Thanks to my RL dog and her revolting habits there is also an option for non finicky dogs and cats to eat the dead roaches. It raises hunger and lowers hygiene and removes the dead roaches so your sims don't have to clean them up. I copied the animations from the pet food bowl, but decided that it was a little too disgusting to allow toddlers to chow down as well (even though I'm sure that there are RL toddlers who would totally eat bugs). 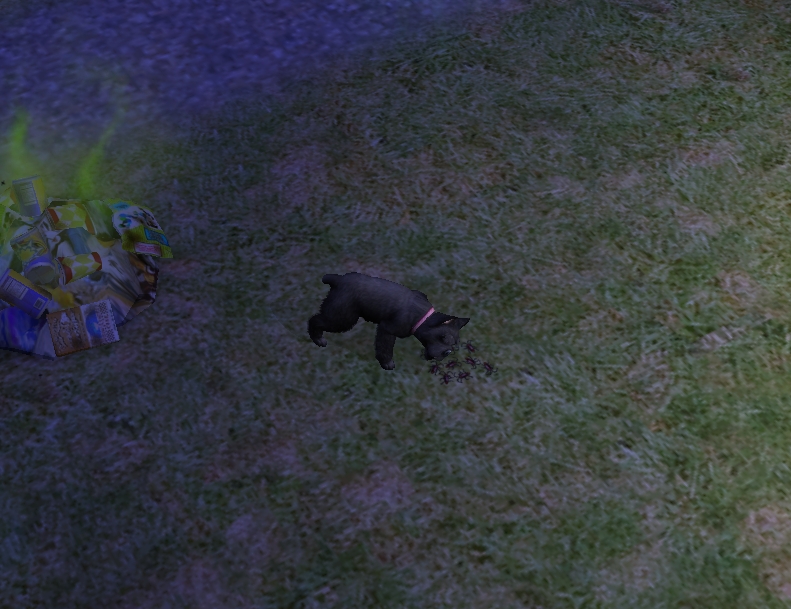 I just discovered that Sunni has made a buyable rat object at Plumbbob Keep that functions in the same way as the roaches and she has a Pets version that she added the cat interactions to! I know there were some people in the comments craving rats instead of roaches, so you can run over and grab it here.

Number of roach spawns I managed to get on one lot after it had been trashed for testing for quite some time: 15 (although I may not have counted some. I swear the maid cleaned up more than 15 after I called the exterminators).

Apologies to: My sims, who spent many miserable hours locked in the house or having their desperate spray actions cancelled so they didn't kill off my hard earned roaches. Much crying, flu and environmental frustration was experienced. Also to my pets, who, due to me randomly adopting to get more pet variety for testing, ended up spending all their non testing time either fighting or running away (I had three highly aggressive pets and one cowardly. At one point they had all run away). 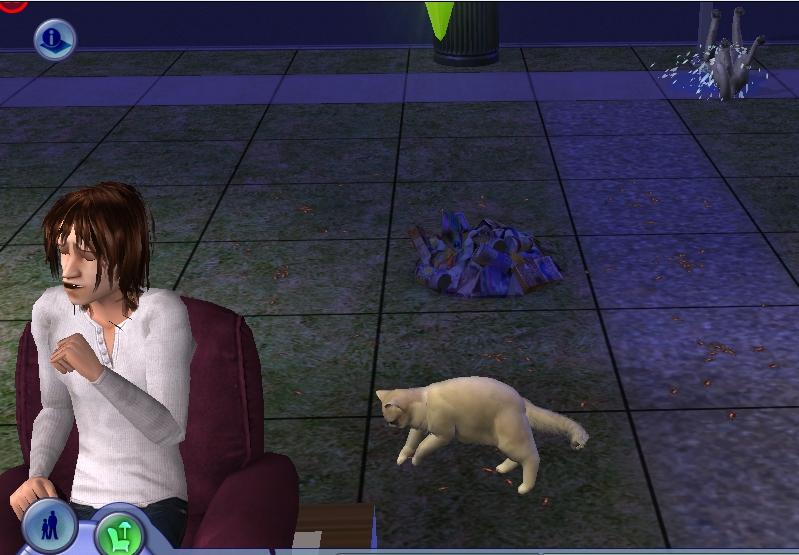 In memory of: Denny and Kirby, my two elder testers, who died shortly after I finished the testing (I'm sorry, Kirby, for taking such bad care of you that you died while run away).

Thanks to: Phaenoh, who held my hand throughout the entire thing and gave me tons of advice/tutorials/testing/fixing screw ups/answering stupid questions! I could not have even started it without her and she stuck with me all the way through what ended up taking probably far longer than it should have due to my ineptitude! I cannot thank her enough!

And thanks to Balin (pictured above, rolling in pee), the wolf who kept hanging around annoying me by barking at the door, but was forgiven when he autonomously proved that visitors to the lot could eat roaches too.

Additional Credits:
Assorted people: maybesomethingdunno, Echo, Mootilda, Nysha, HugeLunatic and mustluvcatz, who helped me on the boards when both Phaenoh and I were out of ideas.
Tags: #roaches, #hunt, #cat

Back to download view
66 Comments / Replies (Who?) - 15 Feedback Posts, 50 Thanks Posts
Hide Thanks Posts for this thread (Show only feedback)
Page 3 of 3
Charity

Fair point. I guess it's just the general stereotype of roaches that says that they're dirty. We actually have cute tiny bush cockroaches that come in on the mail.

I'll consider the hygiene drop for the cat a result of the blood and guts from the kill then. XD
Bubblebeam
Scholar
THANKS POST

Man I'm always so late to the scene when it comes to CC, lol. Still had to say thanks for this though. I miss a lot of things TS1 had that they skipped in TS2. You made one less difference. Plus, it is realistic. My kitties are my roach bodyguards.

And yeah they're renown for being the most disgusting, foul smelling little gits around. The fact that even my kitties won't eat them is a testament to that!

Recently been having so much trouble with roaches (odd they haven't been a huge problem for nearly 10 years of game play) and found myself wishing for the hunting cats of Sims 1. You are an absolute life saver!
punkrockgoth1988
Instructor
THANKS POST
#54

Okay this is definitely getting installed. I can't stand roaches in real life (though I respect the ones that are kept as pets) and the ones that infest houses make me freak out in a very bad way. The game ones aren't as bad but still, the less I have to spend looking at them swarming around, the better.
SweetCheri
Test Subject
THANKS POST
#55

This may sound a little dumb, but does this also affect kittens? Or just adult/elder cats? Anyway, thanks for this great mod!
Charity

Just Adults/Elders. Kittens can't play with the catnip mouse, which is what I took the animations from.
sam&skye
Instructor
THANKS POST

Love this mod! Must try!
This way at least there is a meaning of kicking the garbage bin.
You are talented to implement such a funny mod.
Thank you.
Ellias
Test Subject
THANKS POST
#59

My cats (and dog) hunt roaches in real life -I think it's great for the game. Not to mention saving my sims the money of the exterminator; spraying them they always come back :/
3ttu

damn, dude, thx for this mod! i love it. I made translate for this on russian ↓
Download - please read all instructions before downloading any files!:

@Charity
HCDU Plus reports a conflict with joninmobile's Buyable Roaches (https://modthesims.info/d/316987/buyable-roaches.html)
zzzMods\Charity\catshuntroaches.package --> zzzMods\joninmobile\BuyableRoachesSicknessV1.package
OBJD: 0x41A7 - {multiple} (0xFFFFFFFF)
Is this something I need to be concerned about? Can I still use both together?
Charity

Honestly, I don't know. The object data seems to be stuff to do with the GUID. I didn't change the GUID, because I wanted the new functions to overwrite the game's roaches. If it has the same data then possibly the other hack overwrites the game's roaches too, but I don't know if they would both be read or not, seeing as it isn't a BHAV. You'd probably have to test them in game.
Rosawyn

@Charity, should I be able to direct my cats to hunt the roaches with control pets turned on? They're not doing anything about them autonomously and I'm just trying to work out if that's due to the conflict. When I turn on control pets, there are no actions available on the roaches.
Charity

Yes. You should be able to get them to hunt with control pets. Finicky cats won't eat the roaches, but they will hunt them.
Rosawyn

Thanks. I'll mark it as a conflict.