by plasticbox Posted 27th Jun 2015 at 5:38 PM - Updated 17th Feb 2016 at 7:17 PM by plasticbox
24 Comments / replies (Who?) - 12 Feedback Posts, 12 Thanks Posts
This is a new mesh, and means that it's a brand new self contained object that usually does not require a specific Expansion pack (although this is possible depending on the type). It may have Recolours hosted on MTS - check below the description for more information.
This is a single candle and two antique candle holders, a regular and a wall-mounted one. 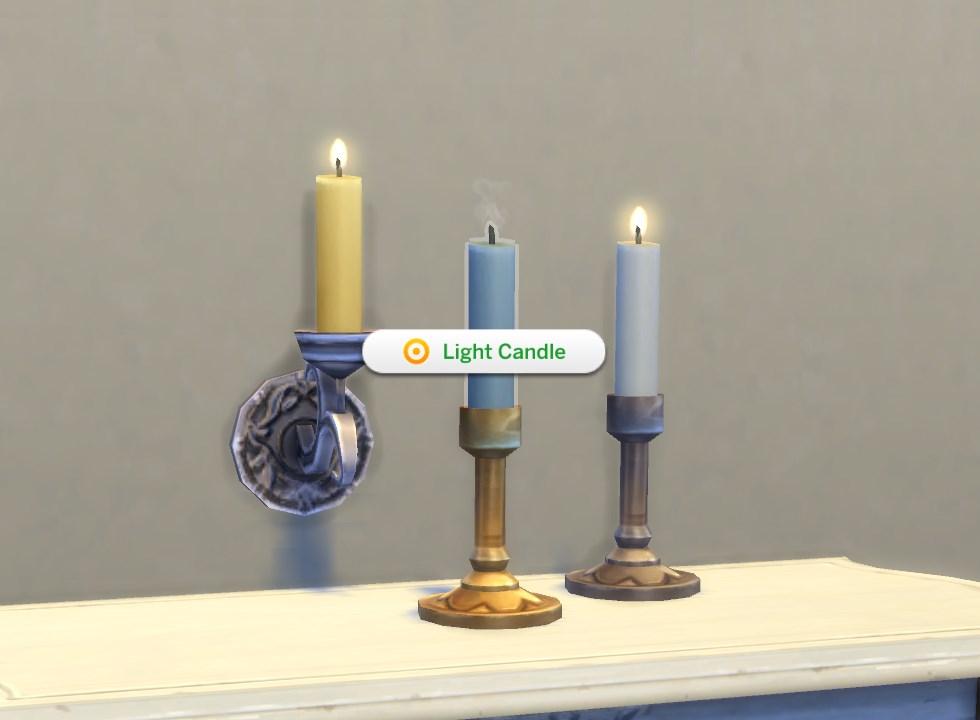 Need more information?
Back to download view
24 Comments / Replies (Who?) - 11 Feedback Posts, 12 Thanks Posts
Hide Thanks Posts for this thread (Show only feedback)
heidi137
Instructor

Many Thanks
They are beautiful , beautiful colors , I love your work, thank you for everything you do for us

This is Brilliant!
Silly Merricat
Field Researcher
THANKS POST
#4

Love it. The wall sconce especially. Thank you so much!
SimsObsessed
Lab Assistant
THANKS POST

Hello, i just love this!! THANKS
mummy_001
Scholar
THANKS POST

nothing else to say as everyone else has sentimented (ok not really a word but close enough to sentiment) my thoughts already...
professorlilith
Test Subject
THANKS POST
#10

Thanks so much! These and the three standing, functional candles make it so much easier to do believable historical settings.
MAdams62656
Test Subject
THANKS POST
#11

This is just what I needed! Thank you so much!

These are beautiful. Thank you. I think they should add environment 1.
Java Joe
Test Subject
#15

Just an FYI, as of 10/15/15 the single candles cannot be placed in game. When attempting to place them a "script call failed" error is occurring. Might want to look into that. Could be a recent patch, or stuff pack that is conflicting with the candle.

Do you have the stuff pack that is required for these? Before you say "yes", check that you *actually* still have it installed. Wouldn't be the first time Origin decides to uninstall this when you fiddle with your setup.
Stuff for TS2 · TS3 · TS4 | Please do not PM me with technical questions – we have Create forums for that.

Hi there! Just wanted to report something I've noticed: if I place the single candle and light it, then move it in Build mode while it's lit, it stops emitting light but still appears to have a flame on the wick. But at that point I'm unable to click and "extinguish," and there doesn't seem to be a way to get it to actually emit light again. I have to delete it and buy another. This doesn't happen with the other candles whose interactions are those of the regular lights (turn on, change intensity, etc.).
My Simblr is FakeHouses|RealAwesome
Check out my Sim re-creations of 1920s kit homes:
The Shadow Lawn ||| The Plaza ||| The Trenton
plasticbox
Pettifogging Legalist!
retired moderator

Is this while the game is still paused? That I've seen as well; it takes a sec for the effects to update (in Play mode, i.e. when the game is unpaused).

If not, do you have that issue with the ceiling candleholder too? And with the Maxis holiday candles?
Stuff for TS2 · TS3 · TS4 | Please do not PM me with technical questions – we have Create forums for that.

Should have mentioned that I actually did test the Maxis holiday candles; I don't have this issue with either of them. Not sure which ceiling candle holder you mention though? I'm using the wall-mounted candle holder in this post, although this thing happens when the candle is just sitting on the ground as well.

And no, it's not just while the game is paused. The little flickering animation does take half a sec to start up again, as you said, but if I move this candle while it's lit then it actually stops emitting light when I go back to Live mode—that is, the area around it is totally dark, but the flickering animation still appears on the candle. I left it for about a Sim day and the light didn't come back, and because it loses the "extinguish" option as well it seems I have to just re-buy it.
My Simblr is FakeHouses|RealAwesome
Check out my Sim re-creations of 1920s kit homes:
The Shadow Lawn ||| The Plaza ||| The Trenton
plasticbox
Pettifogging Legalist!
retired moderator

Yeah the "Light Candle" thing checks for the state, it's not available when the game thinks the candle is already lit. Seems like the light emission and the effects go out of sync somehow -- I was asking abut the ceiling light (this one: http://modthesims.info/download.php?t=571621 ) because I tested with that recently, and for me it seemed to work (also when going to build mode and back). I'll check if I can find anything that has changed in the meantime; the candles in this post are from a much earlier game version after all. If you can let me know if you are seeing the same issue with the ceiling light too, that would be very helpful! =)
Stuff for TS2 · TS3 · TS4 | Please do not PM me with technical questions – we have Create forums for that.

Ok, just tested that ceiling light: if I move it when lit, the same thing happens (flame flickering, but no actual light emitted). But when I click on it I get the "light all candles" interaction, and selecting that makes the actual light come back.
My Simblr is FakeHouses|RealAwesome
Check out my Sim re-creations of 1920s kit homes:
The Shadow Lawn ||| The Plaza ||| The Trenton
plasticbox
Pettifogging Legalist!
retired moderator

I'm not sure if I can avoid it becoming unlit in Build mode (IIRC for that I would ahve to add back the states that are responsible for the Holiday Cheer buff, which I removed on purpose). But here is a package with the tuning updated from the ceiling light, it should work the same as that one now. I haven't had a chance to test yet, I'll update as soon as I do, but you could already have a look as well =)

Thanks for your feedback!


(Attachment removed -- is now in first post)
Stuff for TS2 · TS3 · TS4 | Please do not PM me with technical questions – we have Create forums for that.

Meh, it's no big deal at all that it's unlit in Build mode if you ask me. Looks like this one is working though; thanks! I moved a lit candle and the light came back immediately after switching back to Live mode.

My Simblr is FakeHouses|RealAwesome
Check out my Sim re-creations of 1920s kit homes:
The Shadow Lawn ||| The Plaza ||| The Trenton
plasticbox
Pettifogging Legalist!
retired moderator

Thank you! I updated the main post now. =)
Stuff for TS2 · TS3 · TS4 | Please do not PM me with technical questions – we have Create forums for that.

In the kingdom of the blind, do as the Romans do.
the ceiling fan
Test Subject
#25

I Believe the latest patch may have broken the candles. It seems that I can light them, but cannot extinguish them (no interactions, permanently lit).
If I remember correctly, they worked fine after the nanny patch, so something must have changed in that last quick update that came shortly after.