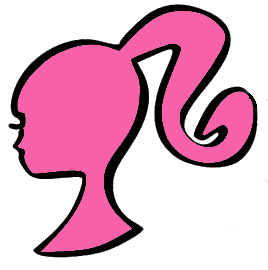 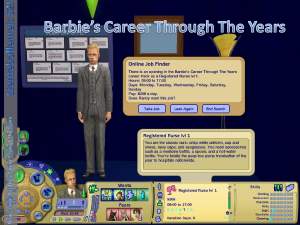 47 Thanks  Thanks     7 Favourited
For this month's theme I had a bit more trouble finding something suitable until I found Barbie on the internet. Barbie is a bit Vintage as it's from the 50's, 60's, ... till now still very popular. She have had many careers so I thought I'd write one suitable for several of her outfits. I didn't want it to be a Jill of all trades career and I hope you find that I succeeded in that purpose. To know which careers I chose (from Barbie 1959-1989) you'll have to look under the spoiler unless you want it to be surprise.
I hope you like it.

Level 5
Title Rock Star lvl 5
Description Everyone already knows you as a fashion model and as Miss Universe. That gives you a head start of course. You put a glamorous neon stamp on the rocking styles of Pat Benatar and Madonna. You reflect the hottest fashion trends, from neon colors to glittery fabrics, headbands and leggings to wild hair. You're dressed to shine on or off the stage!
Wages $1 000
Days Monday Tuesday Wednesday Thursday Friday
Starthour 9.00
Working hours 8.00
Outfit Everyday outfit
Carpool Sports Car - Mid
Cooking + 0
Mechanical + 0
Body + 1
Charisma + 2
Creativity + 0
Logic + 0
Cleaning + 0
Friends + 1

Level 10
Title UNICEF Ambassador lvl 10
Description You join Audrey Hepburn in a sparkling salute to the children's philanthorpy. As a famous surgeon/model/rock star and olympic hero everyone looks up to you. All you can talk about is "The Rights of the Child".
Wages $5 000
Days Monday Tuesday Thursday Friday
Starthour 9.00
Working hours 8.00
Outfit High Rank
Carpool Limo
Cooking + 0
Mechanical + 0
Body + 0
Charisma + 0
Creativity + 0
Logic + 2
Cleaning + 0
Friends + 1

Original icon http://barbiierosa.tumblr.com/
Justification by requester To find inspiration for the new theme I searched the internet and I found this: http://www.goodhousekeeping.com/lif...ers/?thumbnails
I found it really suitable for this month's theme and so this is a career with different jobs in different levels. The careers which barbie had from 1959-1989.
I tried as much as possible to order the levels to be more realistic than swithing from one career to another.


If you have University you will notice this career might be linked to some majors (look at the overview to see if and which ones) and that your sim might need a degree or not (not necessarly a degree in a major that the career is linked to. Any major would do).
If you don't have University, this career works as a normal career.
Also if you look with the Job Board or with another object mod for this career, the degree does not matter. You will always find the career for your sim.

If you have any questions, you can always ask!


Chance cards
A lot of requesters nearly never ask for chance cards. It's a lot of work writing these so I understand that, but I want to provide chance cards as well.
It's not needed to create a career and also MTS' rules say you don't have to write them.
I don't write the career myself, so I don't feel that it's up to me to write the chance cards as I don't know enough about the subject.
That's why I wrote general chance cards that can fit with nearly all careers for all levels.
It are ten different chancecards. All made for a general job. Sometimes it won't really fit, but it's the best I could do.
It's more something I do for me personally as I like having chance cards in my game.
As I understand some downloaders would think that these chance cards don't go with this career, I added 2 versions one with and one without chance cards (CC).
For both versions all PTO versions are made so there are 6 careers in total.
If you don't like the general chance cards, you can play the career without and if you want to write your own chance cards for this career, you can do that here: http://bit.ly/19UHWiQ

PTO versions
PTO7 by default.
PTO3 version.
PTO5 version.
These versions are available for the career with and without chance cards.

Download
All 6 versions of this career have a different GUID so you can use them all together in game.

Thanks
If you like this creation, please, press the thanks button and/or leave a comment. Feedback always keeps a creator going for making more new stuff.

1. Is the career already translated into the language you want, because then your hard work would be in vain? Check it here: http://bit.ly/PS89j8
2. It's important that you just translate the English lines. (See the thread to know which descriptions and which levels belong together)
3. You have to translate it twice. Once for male and once for female. Even when it's the same description!
---- Please, don't change the other lines.
4. Don't forget to translate the word "Unemployed" and to give me the translation of the career title as I will need that info when I add your translation to the career.
5. Upload the translated file to a comment in this thread.
--- In your comment please state clearly the translation of the career title and the language you translated it in.