No Dishes in Bathroom Sinks

by plasticbox Posted 24th Nov 2015 at 10:01 PM - Updated 15th Feb 2016 at 1:00 PM by plasticbox
68 Comments / replies (Who?) - 6 Feedback Posts, 12 Thanks Posts
These are tuning overrides that remove the dishwashing interactions from eight different sinks (those that look like one would use them in a bathroom), to be able to better control where sims can and cannot wash their dishes. 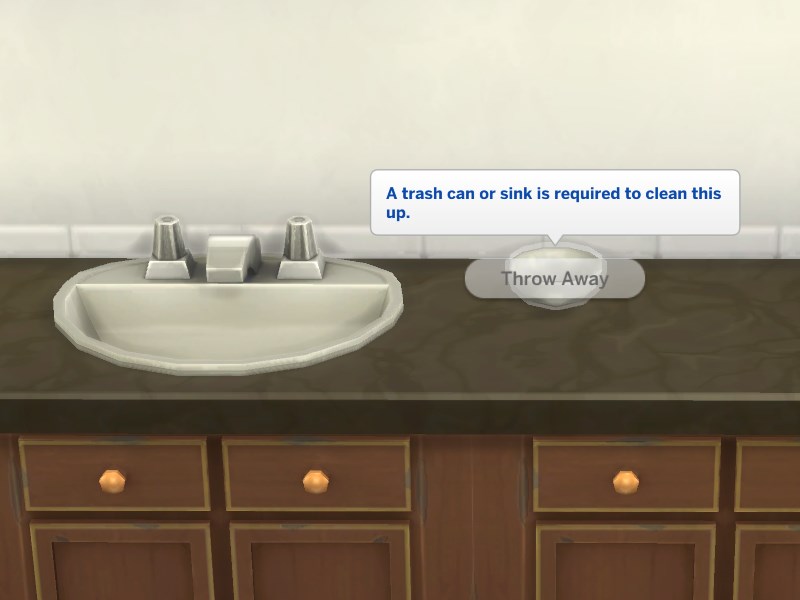 In the zip are eight separate packages for all of the Base Game pedestal sinks and the “Ovum Bath Sink” (the one on the picture above) -- see the catalogue screenshots for which is which.

Note that the Bureau sink is using the generic sink tuning -- it is not in use for any other sinks in the base game, but EP/GP/etc users should doublecheck with/without that package in case sims seem to have issues using EP/GP sinks for doing dishes (they may or may not be using the same tuning). I only have the base game so I don’t know.

Need more information?
Back to download view
68 Comments / Replies (Who?) - 18 Feedback Posts, 48 Thanks Posts
Hide Thanks Posts for this thread (Show only feedback)
Page 3 of 3
Christiel
Test Subject
THANKS POST
#51

Thanks!
Sweet! Got several of your mods/objects. Love it!
Any chance you could make a mod like this for TS3 as well? Pretty please? Can't seem to find one anywhere...

Keep up the good work!

Thank you! It's so annoying to see them wash dishes in the bathroom. This is very much appreciated.
ladylolafake10
Test Subject
THANKS POST
#54

tanks i love that
Meaggles83
Test Subject
THANKS POST
#55

This has been driving me crazy -- I favor large families and it is near impossible to keep everyone clean, pottied, and dishes clean. Someone is always interrupting someone else. -_-
cherri9000
Test Subject
THANKS POST
#56

Is it compatible with January 2017 Toddler update?
foreverbauerfan
Test Subject
THANKS POST
#58

Thank You so much for this.. I do get tired of my sims walking upstairs to wash dishes in bathroom sink when they have a kitchen sink and a dishwasher.
Mizuki_Ukitake
Lab Assistant

I was so happy to find this, but it seems this mod breaks the game if you have a child in the household. In two separate households, I had child sims, and when it came time for them to go to school, they would not go, and simply continued whatever they were doing before the alert to go to school came up. Clicking the button to send them off did nothing, and instead caused it to glitch. I could not select other sims, select items, or command the children to stop what they're doing, and all sims would continue to do the same action for in-game hours on end. One boy showered endlessly from 7:50 to 12:45 pm, before I had to force-close the game with Task Manager, as the game would neither save nor pause, nor close by itself. Telling the game to pause would turn the Pause icon red, but sims kept moving, and time continued to progress. Teenagers went to school just fine.
I blame this mod because it was the most recent addition to my mods folder, and when I removed it, the next child I made went to school without any problem.
I suppose I will have to find alternative ways to stop sims from using the bathroom sinks.
Saellea
Test Subject
THANKS POST
#61

Thank you PB! Why sims would walk past a perfectly good kitchen sink to wash a plate in the bathroom is beyond me....
Valdesca
Lab Assistant
THANKS POST
#62

hope you being well.
Minxium
Test Subject
THANKS POST
#63

This message has been deleted by nt95. Reason: delete
sdizon83
Test Subject
#64

Has anyone updated this mod?
What is a beginner to do? My Website My TOT My Forum My website
Candacis

Can someone update this mod?
Edorenel

Ever Hoping for an Update
I hope this mod will get updated! :o It's a great mod, honestly, and highly useful. But until this gets updated, I've been using this temporarily: https://scumbumbomods.com/#/dont-wa...you-angry-poop/
"Tomorrow may be hell, but today was a good writing day, and on the good writing days nothing else matters." - Neil Gaiman


Elegant Cache: Custom Contents for The Sims series
Edorenel: The Writings of Lorene A. Holderfield
toejfl
Test Subject
THANKS POST
#68

I'll use it well. Thank you.