This trait is no longer working because of the Pets update.

[EDIT]
Thank you so much for all the support everyone!
I just wanted to say a HUGE thanks, because I can't reply to every comment.
I also wanted to mention that I check this once every day/two days if I'm really busy.
I have decided I will only reply to questions in comments with answers. This is to save time.
Let me know what kind of things you want me to upload next!
[This part is the original.]
A trait for sims who have no emotions.

This is my first trait/mod for the Sims 4, and has been playtested. It was inspired by LaurenzSide's Yandere Simulator challenge, and I originally created this trait thinking it would be fitting for a Yandere character.

This trait basically disables all moods (Happy, Sad, Angry, Dazed, Flirty, etc.) and your Sim will stay as Fine.

This trait does NOT stop your Sim's needs from going down, but it does not affect them.

I literally hated this trait when I first developed it, because there were all the screenshots that I needed to take. In the end, I had to shrink down the main one, due to it being too big a file for Mod The Sims.

I am new to modding, but I have wanted to contribute to something here since I first discovered the site. I hope you have fun messing around with this trait.

Now, here's the trait in action:

As you can see, my Sim is watching comedy, but not becoming playful. 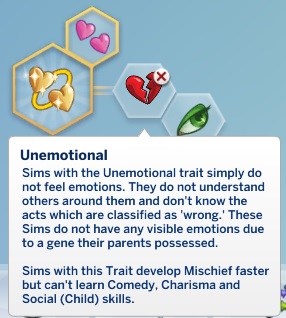 That's the trait in CAS.

And there's my thumbnail.

Built with Game Version: 1.24.102.1
Key: - File was updated after upload was posted
Need help with downloading or installing content? Click this link!
Don't forget to Thank the creator after downloading! Use the Thanks button located above the screenshots above.
Basic Download and Install Instructions:

Need more information?
Back to download view
35 Comments / Replies (Who?) - 15 Feedback Posts, 18 Thanks Posts
Hide Thanks Posts for this thread (Show only feedback)
Page 2 of 2
GlitchhWitch
Test Subject
#26

"sociopath", really called antisocial personality disorder as sociopath is more of an unkind word towards those people and not a real diagnosis, does not make someone not have emotions or feelings. It makes someone lack empathy (expect for at times specific people they create a connection to) which is commonly mistaken for lacking emotions. As someone with experience, assuming "Evil" or "hates children" would go well as a mix of it seems really stigmatized. "Psychopathy" is not necessarily a real diagnosis in the DSM, however it has been used to describe someone who does not experience emotions. Again, not something evil or hating children, and in fact, probably not mean or hot headed, either.

A mix of hot headed and mean, however, could work. Lack of empathy doesn't make someone cruel or get enjoyment out of harming someone, but symptoms of ASPD do include a disregard for others feelings.
So really.. I do hope that if OP were to make a trait for ASPD, it wouldn't be "sociopath" or ableist in any other nature, as there has been a mostly positive reasoning for disorder traits already. Sorry for info dumping, but I felt the need to inform.
miss_kitty
Test Subject
THANKS POST
#27

Awesome. This is a perfect trait for a high functioning sociopath. ;) Methinks a Dexter sim is in my future.
PalePhantasm
Test Subject
THANKS POST
#28

Very nice. :) Good for my demon RP. Though, if it's even possible, having /some/ emotions might be cool. Like a burst here and there or maybe the sim only gets something if the mood would otherwise be really higher for anyone else. To break up the monotony, if nothing else. :p
RedVelvetRainbow
Test Subject
THANKS POST
#29

While this is a thing that happens in real life, it reminds me of Yandere Chan haha. thanks for making this <3
imJustMexoxo

Almost anyone I meet in the game, one of their traits is unemotional
WyethRogers
Test Subject
THANKS POST
#31

Thank you so much!
SylvaraQueen
Test Subject
#32

Hi, is there any way you can update this mod for the Cats and Dogs update (Which screwed up a bunch of shit) Thanks

Please update for Cats and Dogs!! I miss all my traits!
*Jaded_SIMMer*
Test Subject
#34

Sociopath is different than Anti-social. Anti-social is more similar to A-social than to Sociopath and somebody who is A-social is often mistakenly called Anti-social. Anti-social personality disorder is used to describe a person who hates people and social interaction with others. This is different than A-social which is simply a person (usually shy/ suffering from anxiety disorder and/or similar disorders) who dislikes interaction with others because they become very uncomfortable around others. Anti meaning against paired with social gives you a perfect description of someone who is Anti-social. Both Anti-Social and A-social are a type of Personality disorder, though these two things are typically not viewed as real disorders at all. Rather, Like Schizophrenia, both Anti- and A- Social are a symptom rather than a complete Disorder. The difference between the two is that A-social people do not hate others. Anti-social can be viewed as a more advanced version of A-social. Anti-social people grow to HATE social interaction and other people *because* they feel that uncomfortable around others.

Being Anti-social does not mean you lack emotion. People with Autism usually are Anti-social, because communication with others is typically so difficult for them, that they grow to outright dislike and even hate it, and given the amount of bullying and embarressment Autisic kids go through, it is pretty understandable for many to develop the condition. Anti's don't always hate other people, typically they may still have somebody close that they care about, but would still hate talking and being apart of any social situation. Both Anti's and A's do have emotion, empathy and sympathy, and both are *always* developed, nobody is born with A-social or Anti-social disorder, it forms with you along with your personality based on past experience (trauma, Anxiety attacks, extreme embarrassment in social interaction etc.)


Now onto Sociopaths and Psychopathy.
Firstly you are correct about one thing, Sociopaths do lack the ability to feel empathy (as well as sympathy), but that is the exact reason your wrong about the rest. The fact that sociopaths lack empathy and sympathy is why this isn't the same condition as Anti-social personality. Again, Anti and A social are *symptoms* not true disorders. A Sociopath might have the symptom of Anti-social, but that doesn't mean all Anti-social people are Sociopaths. In fact, I myself am Anti-social. I struggle with Social Anxiety disorder. I'm mostly okay on the computer, but my disorder is severe enough that I experience Anxiety (or 'panic') attacks and require therapy and medication to help manage my symptoms. If you where to call me a Sociopath, I would indeed be offended but not for the reason you said. Rather because that is assuming I lack empathy and sympathy which is very untrue. Sociopaths are more often than not born with this disorder. They do lack emotion, though they are not always aggressive, the inability to care or really even understand the feelings of others can lead to them doing horrible things like hurting others or in more extreme cases, murder, simply because they can't see the issue with it.
Psychopathy is not a real diagnosis because it is a description, basically another word for the disorder known as Mania, which is a Bipolar disorder, AKA an emotional disorder. Mania includes mood swings more up and down than the most pms-ing teen you've ever seen. The most extreme form is Hypomania which can and will have Psychotic effects, which is why they call it Psycho-pathy. These Psychotic symptoms can be present in both the severe low Depressive swings and the Extreme high Mania swings of Bipolar disorder. The severity of the Mania in an individual is determined by the severity of their Bipolar Disorder.

My grandmother committed suicide when my mother young a young kid. She had Bipolar Disorder. Bipolar disorder can be passed down through genetics. I know this because my mom watched both me and my sister very carefully as kids for early signs of it.

I'm no doctor, so there's no question that I could be wrong about a few things, but being in a lot of therapy for my Anxiety disorder and having Bipolar in my family history, I grew up learning a lot of this stuff so It's something I'm pretty well versed in because I was always taught to watch for these things in myself and my friends growing up and I think it's important for others to recognize these things correctly as well. ^.^
MonicaChurch
Lab Assistant
#35

Would like to give this trait a try, please update!