Picked Upload! This is a picked upload! It showcases some of the best talent and creativity available on MTS and in the community.
Update - 1st July 2018 : Season Patch

(The ones not updated does not require any changes) 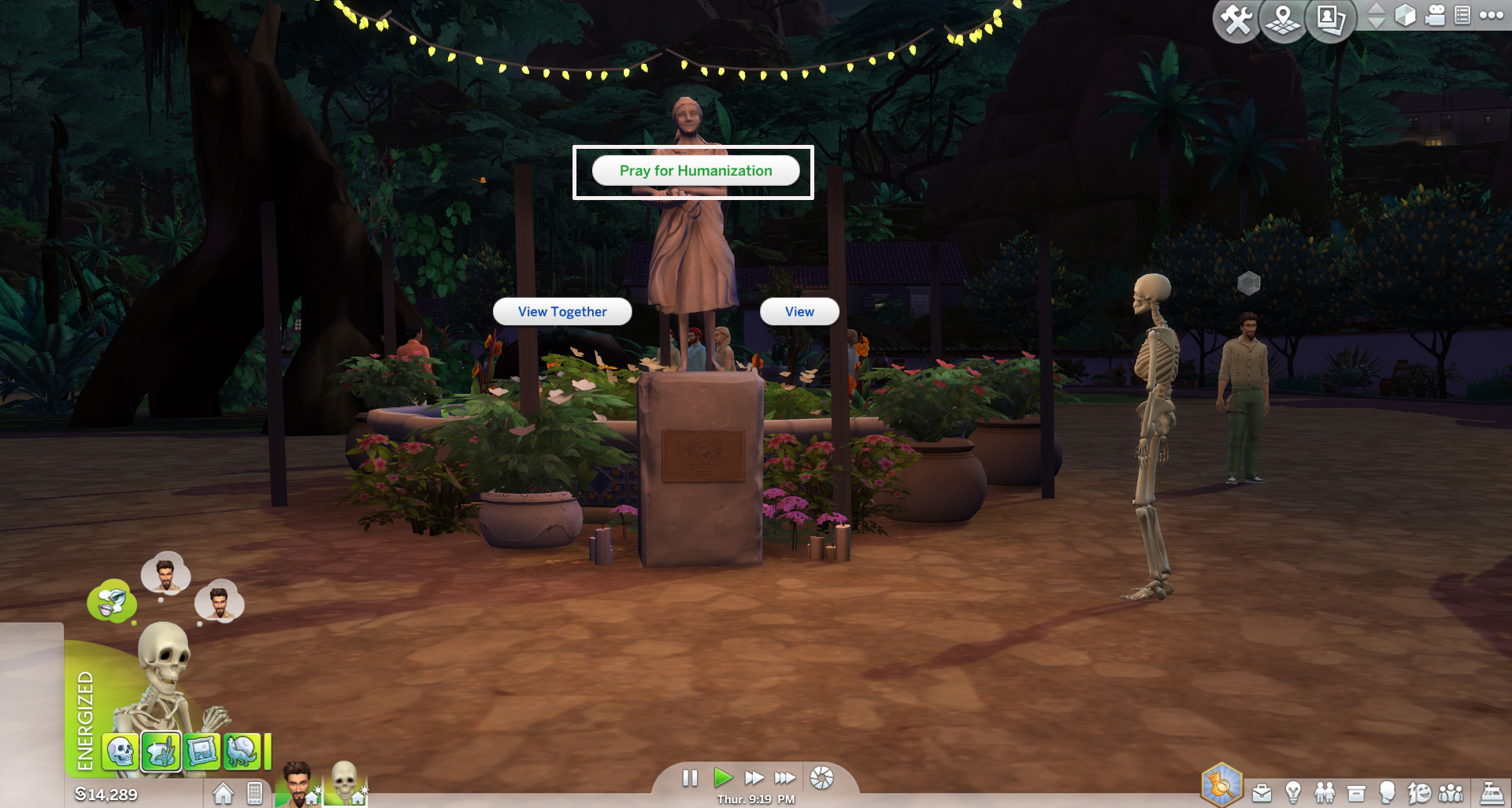 ---zeldagirl180 wanted an option to stop ageing for the skeleton so I added a CAS trait version of the skeleton. I did not override the Hidden skeleton trait as it was bound to cause issues. Instead I created a minor CAS trait to apply Skeletonism ( nothing new! Just another better way to cheat XD ).
--->The 'Humanize sim' and the 'Pray for humanization' interactions will remove the CAS trait
----> Trait Info - Under Social traits. Only buff - +1 Energized 'Blessing of the Bones' , No whims, gameplay modification factors except those provided by the vanilla 'Blessing of the Bones' buffs.
--->Ageing is disabled
---> Issue - If you apply the trait in CAS then the skeleton state becomes visible only after you leave the CAS screen

The trait version ( included in the .rar archive requires the main package - 'icemunmun_Skeleton_Cheats'

Adds four small mods for jungle Adventure. These mods are what I felt I required when I was playing the game so here they are -

-- So the 4 lights that came with Jungle Adventure emits so little light that it is impossible to properly light up the interiors with them. So I brightened the light intensity emitted by them to give a much better light coverage ( See attached images for comparison).

---In game the tree of emotions bears 7 different berries colour coded according to the mood they give. I made 7 different trees which are grown by planting the emotion berries (instead of the single Tree of Emotions)
---The trees produced by planting the respective berries are -

So I made the following changes

---In Vanilla game, the sims had to be a level 4 Selvadoradian Skill to dance the Rumbasims to the Latin music/pop. I removed the skill requirement. Now your sims can dance the rumbasims without the headache of skill gain

Get Any one version of the Rumbasim

--- By using cheats you can add a 12 hour buff or equip a trait to turn any sim into a skeleton ( see below for the list of cheats). I wanted skeletons on the go so i enabled debug interactions to turn a sim into skeleton and remove the skeleton state without cheats and from live mode

--- Interaction - 'Turn Sim into Skeleton' transforms the sim into the skeleton state and gives it one of 3 skeleton colours - White, grey, jazzy mosiac green. Cycles through these three colours.
- Maximizes and locks the all motives except Fun and Social
- Applies the +1 Energized Blessings of Bone Moodlet without a timer ( unlike the game cheat which gives a 12 hour buff)

This is just a handy way to turn on and off the skeleton state without much hassle. Nothing special

( Also i mainly did this since I can never remember long cheats. )

sims.add_buff Buff_Skeleton --->Turns your Sim into a skeleton for 12 hours. (Blessing of the Bones)

sims.remove_buff Buff_Skeleton ---> Removes the Skeleton buff: Blessing of the Bones

Built with Game Version: PC 1.40.61
Key: - File was updated after upload was posted
Need help with downloading or installing content? Click this link!
Don't forget to Thank the creator after downloading! Use the Thanks button located above the screenshots above.
Basic Download and Install Instructions:

Need more information?
Back to download view
44 Comments / Replies (Who?) - 20 Feedback Posts, 22 Thanks Posts
Hide Thanks Posts for this thread (Show only feedback)
Page 2 of 2
icemunmun

For cursed skeletons too or only by changing with these cheat interaction ?

I have included an optional CAS trait package in the folder. Use that package too if you want the trait selectable from CAS

. Mind you, the skeleton trait/state won't be applied unless you exit CAS)
My Patreon
My Blog for my latest downloads
tumblr
Twitter
DEATHNINJA5551
Test Subject
#27

I was having the same problem with not being able to remove the skeleton buff after my skeleton became one through a relic. Finally, I removed the mod and was able to turn her back into a human by removing the buff.
Firegrl94

Could you make a mod that makes excavating/uncovering/authenticating faster?
diabolicalsims
Test Subject
THANKS POST
#30

Thanks for this! This'll definitely be useful for my adventuring sims c:
Barbi110
Test Subject
THANKS POST
#31

I'm curious if the CAS trait is set to random for townies? Because in my game saves, i see a lot of skeletons walking through the neighborhood. i felt that this CAS trait should be limited to only the active family that's created in the CAS and not randomly applied to townies.

I hope you can look into this and see if this CAS trait is set to random for townies.

Hmm...the CAS trait is not randomized. It is strange that is happening though! I will do some checking

thanks for made skeleton mods, no more random townie with non matching outfit. I like to watch some skeletons wandering in the neighbourhood.

And I hope in next update you can add feature to turn NPC in to skeleton via Active sim. So don't need to Edit in CAS to Add Trait.
renjiSAN
Test Subject
THANKS POST
#35

Thank you sooo much!!

This message has been deleted by FusRoDog. Reason: delete
FusRoDog
Test Subject
#36

Hey, I turned my sim's partner into a skeleton, but now no romantic actions can be selected. Please fix this. I wanna smooch a skeleton, dammit.
ClMeow

Is this compatible with the new game update and with Seasons?
The Cat Lady "Meow!"
:popcorn: Eat'n downloadaholic
Arhanghel
Lab Assistant
THANKS POST
#38

does this work with 1.44 seasons?
icemunmun

I will be updating these soon

Yes! Thank you! My sim was stuck as a skeleton! She's back to her "normal" self again! Cannot thank you enough! Thought I was stuck with her like that. Couldn't change her outfit! :D
Snagglepup
Test Subject
THANKS POST
#41

You should make it the trait gets added to sims born from the Grim Reaper.
Apsalar

Is there any way to stop other sims from being spawned with the skeleton trait? Tons of sims are being spawned with the trait and it's really annoying. lol
I can use the skeleton cheats to remove the trait from the sims walking around, but when you have to remove 20 of them at the same club, it's a bit much.
So be it. Move. ~Jason Bourne
Simblr
Stardust74
Field Researcher
THANKS POST
#43

Is this usable with latest patch?