by Naus Allien Posted 3rd Mar 2018 at 8:17 PM - Updated 29th Nov 2018 at 10:20 PM by Naus Allien
28 Comments / replies (Who?) - 3 Feedback Posts, 1 Thanks Posts
This is a new mesh, and means that it's a brand new self contained object that usually does not require a specific Expansion pack (although this is possible depending on the type). It may have Recolours hosted on MTS - check below the description for more information.

* First, I uploaded a version that only requires Late Night of the original vampire coffin. So if you held off downloading the fixed version because you didn't have Supernatural, now you can download a Late Night-compatible version. The name of the file is "NausAllien-TS2NLVampireCoffin-LN-Fixed.rar." If you have Supernatural, you should download the Supernatural version. If you have both, you can download either or both, but keep in mind that each version has a different GUID, so if you install both versions you'll end up with duplicates (just with different icons). This version fixes the drop shadow, which I ended up hating because it was way too big.

, there's a NEW version of the coffin. This version corrects the issue of vampires hovering above the coffin by changing the height of the coffin mesh. Now vampires sleep INSIDE, though there's some clipping getting in and out. There's also the problem of the vampire sleeping animation spawning flames (for the Late Night Altar's candles), so without the special altar I made (which included said candles), the flames will be floating in the air, though they can easily be disguised with other objects. Because the change in height of the coffin rendered the original TS2 altar incompatible (And believe me, I tried to modify the mesh but it became a clipping monstrosity), I decided to scale up TS3 altars (from Late Night and Supernatural) so you could place the coffin on top of them. Needless to say the Late Night Altar requires Late Night and the Supernatural one requires that expansion, but you can have BOTH if you have both expansions.

* Alternatively, you could use this version with any counter or display pedestal. Luckily, there's no routing failure so feel free to use any display pedestal or counter, or any other object of similar height. The only issue is that the floating flames that appear when a vampire falls asleep will be more visible (though you can conceal them with carefully placed columns or plants).

* You can have BOTH the alternative and the original version installed at the same time.

UPDATE - MARCH 7th: I've updated the coffin to a) fix the drop shadow, which was too big upon closer inspection; b) move the coffin slightly to the left so it'll match better the sleeping animation, vampires still sleep above the coffin if you use this version; c) add a new preset and tweak the alpha texture a bit. Download the new file "NausAllien-TS2NLVampireCoffin-SN-Fixed.rar" and replace the previously downloaded file.

UPDATE - MARCH 5th: Check THIS post if you want to try a work-in-progress version of the coffin with a different height (so that vampires sleep/float in the coffin and not above it). This version requires a remesh of the altar, so in the meantime you'll have to use counters or pedestals to "support" the coffin (unless you don't mind it floating in the air). There's also those annoying candle flames which appear everytime the vampire falls asleep. This version requires Supernatural. 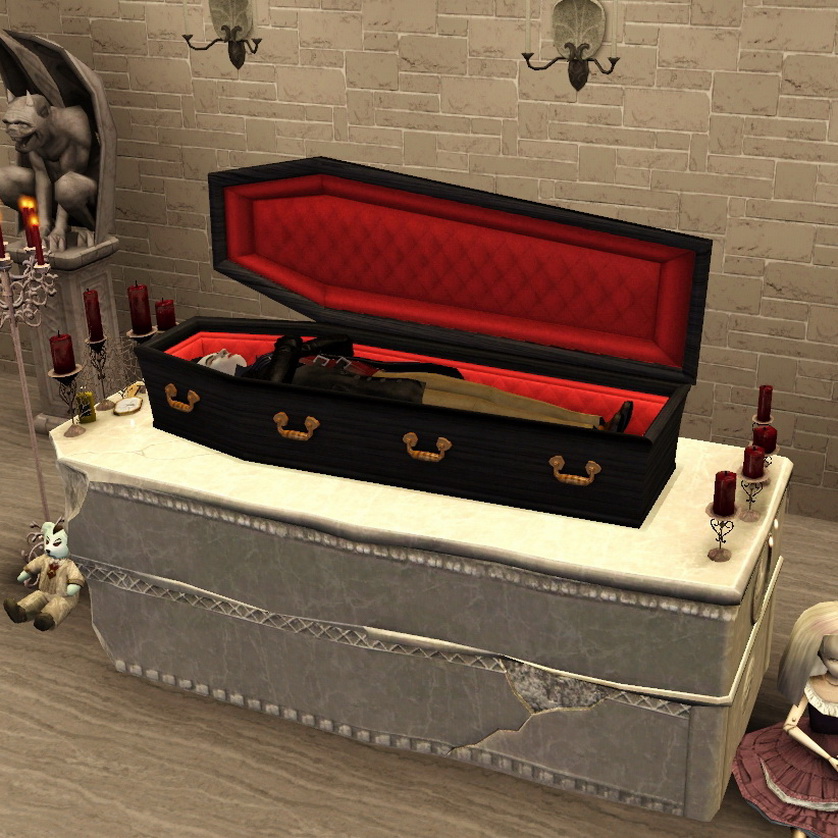 Good morning, afternoon or evening everyone! It's been so long since I've uploaded something. I've been working on many projects but I never got to finish any of them. But now that I had some time to spare, I decided I wanted to go back and finish some of them, starting with this conversion AND adaptation I made of TS2: Nightlife's Vampire Coffin.

To achieve the look you see above you need to combine three objects:
- Vampire Coffin (There are two versions, depending on the EPs you have)
- Vampire Altar (Includes two slots for the torches)
- Invisible Torch (Includes a custom thumbnail)


THE PROCESS:
This project was a request from a long time ago that I never got to finish. I went through many versions and there were many headaches, but in the end it was worth it because I did the most I could within the framework of TS3 animations. I decided the best course of action was to make this object modular. At first you could attach and detach the lid (and switch between a closed lid and an open one), but this version was buggy and it required that you change the lid everytime a Sim went to sleep on the coffin so I discarted this version pretty quickly. Then I realized I needed to split the mesh into two pieces. My reasoning was that more than I needed more than four CAStable slots for total customization. I wanted to make every bit of these objects CAStable to take full advantage of one of the best things about The Sims 3. Because I didn't want the braziers to be deco only I made an invisible torch (using the base game torch with transparent textures because modifying the mesh in any way gets rid of the flame effect) and I added slots to the braziers so the torches could be placed in the right spot. I really like the final result with the braziers turning on/off the way lights do. I added some of the accesories and decorations the TS3 mesh has because I noticed that whenever a vampire went to sleep, candle flames would appear. I hated to see those floating flames so I went and added the accesories from the TS3 altars in the TS2 mesh. The final hurdle came in the form of the vampire skull engraving the original TS2 objects has. Although I did't like it very much I knew I needed to include it for the sake of completionism. But to separate the engraving from the rest of the coffin was not an easy task.

So here you have it folks, one of the most requested items by vampire lovers. I hope you enjoy it!

Requires either The Sims 3: Late Night or The Sims 3: Supernatural for the animations. If you have both, download whatever you want. DO NOT download BOTH versions because it's pointless (only one will appear but the game with load the object twice). The altar is compatible with both versions. The invisible torch is base game only. Additional Preset: The second and third presets of the altar and coffin respectively are included as a bonus to show how the object looks with lighter colors. The Coffin and Altar can be found in the following category:
- Sort by Function -> Comfort -> Beds

Note: I changed the price to 0 (zero) after taking this screenshot. I the invisible torch to be the first object in that category, otherwise the custom thumbnail looks really weird.

If you need more info, see:
Back to download view
28 Comments / Replies (Who?) - 13 Feedback Posts, 14 Thanks Posts
Hide Thanks Posts for this thread (Show only feedback)
Page 2 of 2
PuddingFace

Yes that would work. I'm going to download that. BTW do you know how to do that? Lower the height? My experience with animation is not much. Like I can make a custom animation and script that into a custom interaction but the quality of the animation tends to be not as good. I'll try to do it but I can't guarantee results.
Naus Allien

Well, I've tried to do animations for TS3 the way I do animations for other games, but the results have been nightmarish to say the least. Somehow what I do in the 3D software (whether it's Milkshape or Blender) NEVER matches what I see later in the game.
PuddingFace

Yea it's not easy that's for sure. If you know any Machinima animators maybe you can ask for some help. Some may even be in the forums maybe.
Flaygor
Forum Resident
THANKS POST

Nice work Naus. Congrats on being a picked upload.