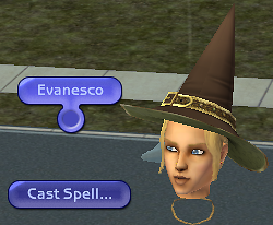 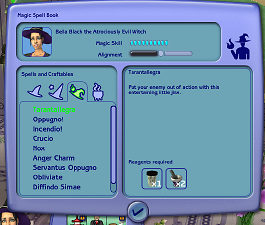 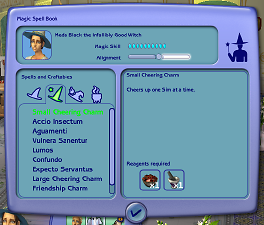 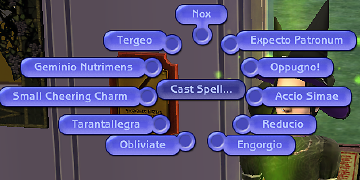 18.04.'19 Want issue solved!! While looking into entirely different matters, i came across the solution for those stubborn want texts. A new file is now available, Wants.package, which has to remain named this way. Place it in your Downloads folder. If you have other want-altering mods that also have to remain named like that, just use a different subfolder. I've tested this, and my edits were available from both files. Obviously, if you have another mod targeting specifically these wants/fears, using spell names from another fandom, only one at a time can be used.

23.06.'18 Updated to include missing leaf pile menu, fix a typo (thanks @Modder), and bring out the Time-Turner from spell list. Please redownload for the changes to take effect; it's got the same name and will replace the old incomplete one.

For all HP fans, here's a text replacement pack that changes the names of the spells we already have. That means they will not change the way spells are learnt, cast or handled by the game, only the words we see in menus and the spell book.

As far as i know, besides Apartment Life for the magic, one would need Seasons for the leaf pile spell, and Pets for the Spectral Cat. Since i haven't been able to get the AGS to work, i do not know if in the absence of Pets or Seasons the package crashes, or quite simply the spells aren't called on anywhere and so the texts ignored.

Possible conflicts: it does not conflict with mods that target alignment (such as this one ), but if you have .package-s editing the actual spells, containing their catalog description (CTSS) or menu name (TTAs/STR#), i cannot tell which would be loaded first and therefore would show in-game.

It started out as one spell, which became 5, then 10, then oh my! nearly all of them, which begged the effort to transform the last few into something that, i admit, is only likely, not straight out of the books/movies. So here they are, as viewed in the grimoires (yes, i went there; i made Bella, Cissy and Meda Black to test) :

Since in HP the incantation is just a couple of words, i've edited out the rhymes (was anyone ever partial to those?) to add a description, sometimes a warning.

- and the ones that are a stretch, but in the end they work well in the set:Having changed these, it seems odd what we can find for one alignment or another. Confundo turns out positive? And making someone fat is neutral? You really lose track of when a spell is going to clash with the Cast good/bad spell wants and fears.

Known issue: SOLVED!! Read the update notice at the top of the page.
If other issues arise, please post them in Comments so that i may investigate.

Have a magical summer ^.^

Additional Credits:
Many thanks to Lamare, who helped narrow down and fix problems.
Grateful to JKR for this wonderful universe.
And to whichever great-grandparent passed down their persistence to me.
Other Information

Description: One of the great things about witchcraft is that you can summon your own pet! If your Sim is feeling lonely or simply wants a cool companion, click on your Sim and select "Cast Spell... Expecto Patronum".