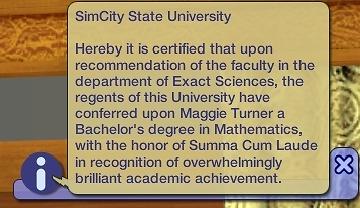 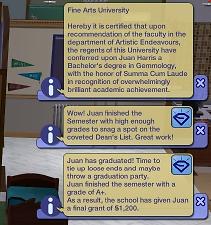 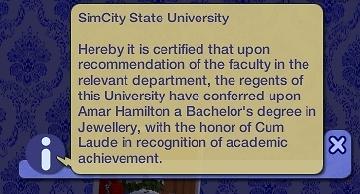 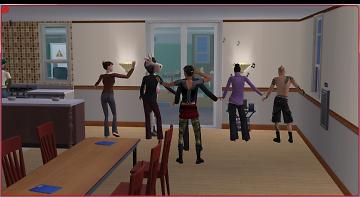 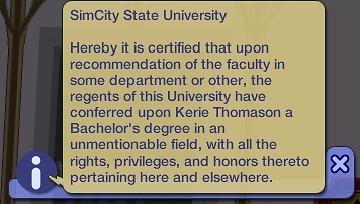 66 Thanks  Thanks     22 Favourited
No doubt by now you're used to Maggie Turner and her pink turban. This time, she's presenting the ultimate college diploma: a properly informative document.
I was looking for a version that wouldn't be a HarryPotter-themed default replacement, but a one-size-fits-all for any fandom or preference. As it turns out, the Pets expansion is required for this newfound efficiency, but beyond that, whatever happens to your downloads folder along the way, this diploma should cope with the trouble. If someone wants the no-Pets version, i will edit and post it as soon as possible, but i'm guessing that doesn't happen much any more? Do tell if i'm wrong.

Make absolutely sure that you have only one version -- as a default replacement it cannot coexist with other models of itself, so if you happened to download the version from the Jewellery major, this one has to replace it.

How it works
- Your own Campus name by means of an extra attribute to store University ID at the moment of initialisation (that means STR# instance 100 Attributes and BHAV 1008 CT - Init modified).

Because it uses this number, and not a recorded name, if you delete the college 'hood and make more suburbs afterwards, that ID will belong to someplace else. Be careful or your diploma might say you've graduated a shopping district! However, for the diplomas already existing in game, it cannot look back at your Sim's history, and the default title will be SimCity State University.

- Your custom major name through the substitution $GUIDCatalogNameLocal:X:Y, to replace the tedious and necessarily explicit GUID check inside the BHAV 1002 Interaction - Read Diploma. This way, the list of majors is no longer required inside the diploma (STR# 12D Dialog prim string set changed) AND any custom major is automatically detected. "But what happens if you delete a major?" Well, in that case, your diploma will default to a funny but entirely uninformative text. It's probably better if you just leave them where they are, but the game won't crash. If you put the major back, its GUID will still be stored inside the diploma and its name available for finding again.

- Three departments according to what each major was initialised as: Exact Sciences (for Math, Bio, Economy, Physics), Written Word (Literature, History, Philosophy, PolSci, Psychology) and Artistic Endeavours (Art, Drama). Because sometimes custom majors simply cannot be categorised this way, there's also a unified version that, unlike the original diploma, just says "relevant department", instead of repeating the major's name.

For this purpose, there are two "Read Diploma" BHAVs, with different instance numbers. The currently active one includes this split by department, but if you want the other one instead, you should swap their instance numbers.

Here it is in all its splendour, and you can find the other variations in the extra screenshots:

To change what a custom major is initialised as (and therefore what icon students will show while studying), open it in SimPE, go to Function Init(), last row. Majors are listed alphabetically, Art being 1 up to Psychology that's B, so simply replace that constant with the number you need.

Yeah. After someone's spring break, hula became all the rage, and tamed the cow mascot.

Additional Credits:
Echo, for an old thread that was very useful.
Chris Hatch, for expert advice.
And as always, SimPE and its creators, making our game better every day.