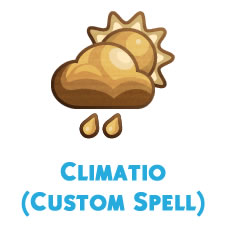 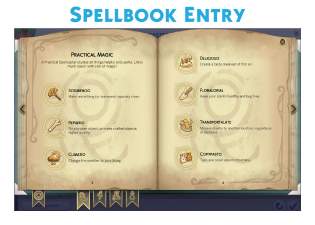 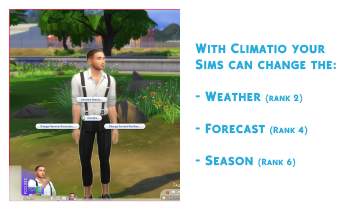 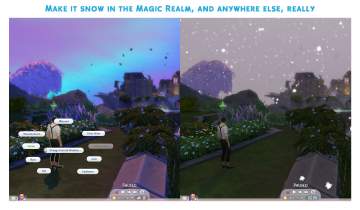 "Climatio" is a new spell that grants Spellcasters control over the weather, seasons, and forecasts.

This spell belongs to the School of Practical Magic. Starting at the Neophyte rank, Spellcasters can learn this spell by reading the "Tome of Climatio" (available for purchase in Caster's Alley for $155) or randomly after winning a Magic Duel, asking the Practical Magic Sage to teach you a spell, or practicing magic on your own.

The options to control the weather are the same ones provided by the Weather Control Device. However, instead of being locked by a Handiness skill level requirement, their availability depends on your Spellcaster's rank.


The interactions are accessed by clicking on your Sim and going to the "Spells" > "Climatio" pie menu (check it out here). Once you select an option, your Sim will head outside (if they are not there already) and cast the spell, which will fail or succeed depending on your Sim's charge and perks. For instance, the "Master Caster" and "Practiced Practicality" perks greatly lower the chance of failure.

Failing to cast the spell will cause a random weather, forecast, or season to be selected. Additionally, if your Sim has the Curse of Scrambled Spells, they may sometimes change the weather, forecast, and season instead of casting whatever you told them to cast. There's also a slight chance to learn the spell this way.

Note that just as with the weather machine, advancing the season will delete scheduled holidays.

This custom spell requires my Spellbook Injector mod. It was made to work with game version 1.56 and later.