by Zarathustra Posted 13th Apr 2020 at 3:24 AM - Updated 14th Apr 2020 at 7:55 PM by Zarathustra
17 Comments / replies (Who?) - 3 Feedback Posts, 14 Thanks Posts
There is a story, probably apocryphal, from the 17th Century about Sir Christopher Wren during the reconstruction of St. Paul's Cathedral after the Great Fire of London. As the chief architect of the cathedral he would at times visit the workers carving stonework or building walls and inquire what it was they were doing.

On one such day, he came upon three stonemasons, each hard at work laying the masonry blocks for one of the cathedral's great walls. Approaching the first of them, Sir Christopher asked the man what it was he was doing.

"I'm laying a course of stone for this wall, if it please you sir," replied the first man.

Sir Christopher thanked the man and bid him continue with his work. Coming to the second man, he once again inquired of him what it was he was doing.

Sir Christopher once again thanked the man and left him to continue his work. Upon reaching the third man, Sir Christopher asked for a third time what it was the man was doing.

"I'm praising the Lord our God," replied the third man. 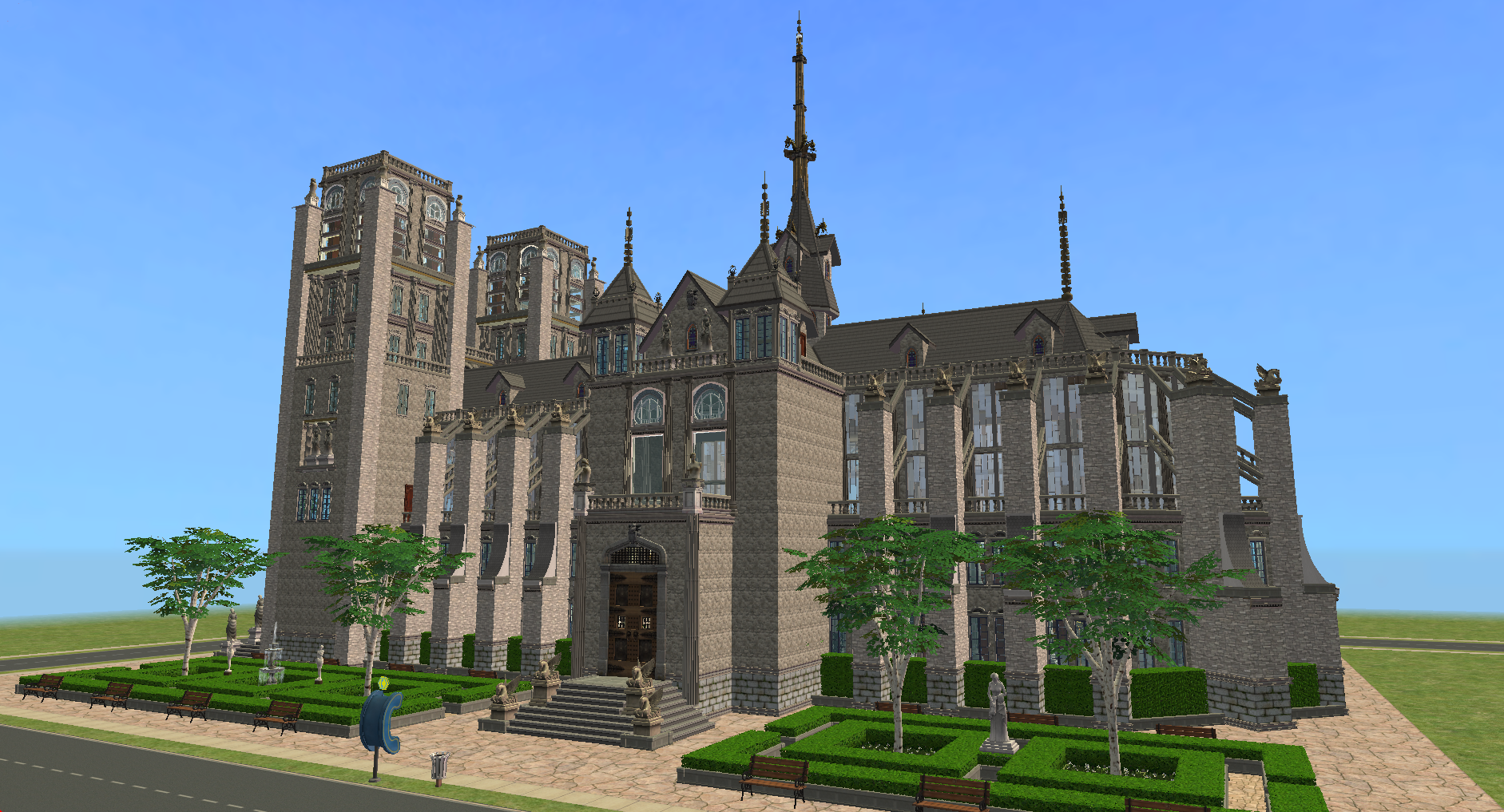 Sacred architecture has taken many forms throughout the world, and many different religions, faiths, and beliefs have developed their own codes and reasons behind the styles they use in creating theirs places of worship. Yet in nearly every case, there will be some aspects of the design of a sacred building held in common, even across cultures, and the purpose of these buildings, to provide a place for people to come together in prayer and worship, can be found in all corners of the globe.

More than anything else, sacred architecture is meant to create a feeling of connectedness for those who enter it. Whether this means a connection to a particular divine being, a connection with all that is in the universe, or a connection with the other faithful in the community can be different between different faiths, and even between different members of a congregation in the same faith. The common element remains, though- the spaces set aside for worship are meant to take us out of ourselves and allow us to consider our connection with something larger than our individual selves.

When we enter into a sacred building we are surrounded by things that draw us out and bring us to a place where we can look at the big picture. Whether it be soaring columns that draw the eye and the spirit upwards, windows looking out on creation and allowing its light in, quiet alcoves and chapels that invite introspection and prayer, or the mere fact that when we step through the doors we know we are in a place set aside for this kind of deep thinking and in the company of others who are there in common purpose, a sacred building can in its own way help prompt us to consider these questions and try to find our answers. 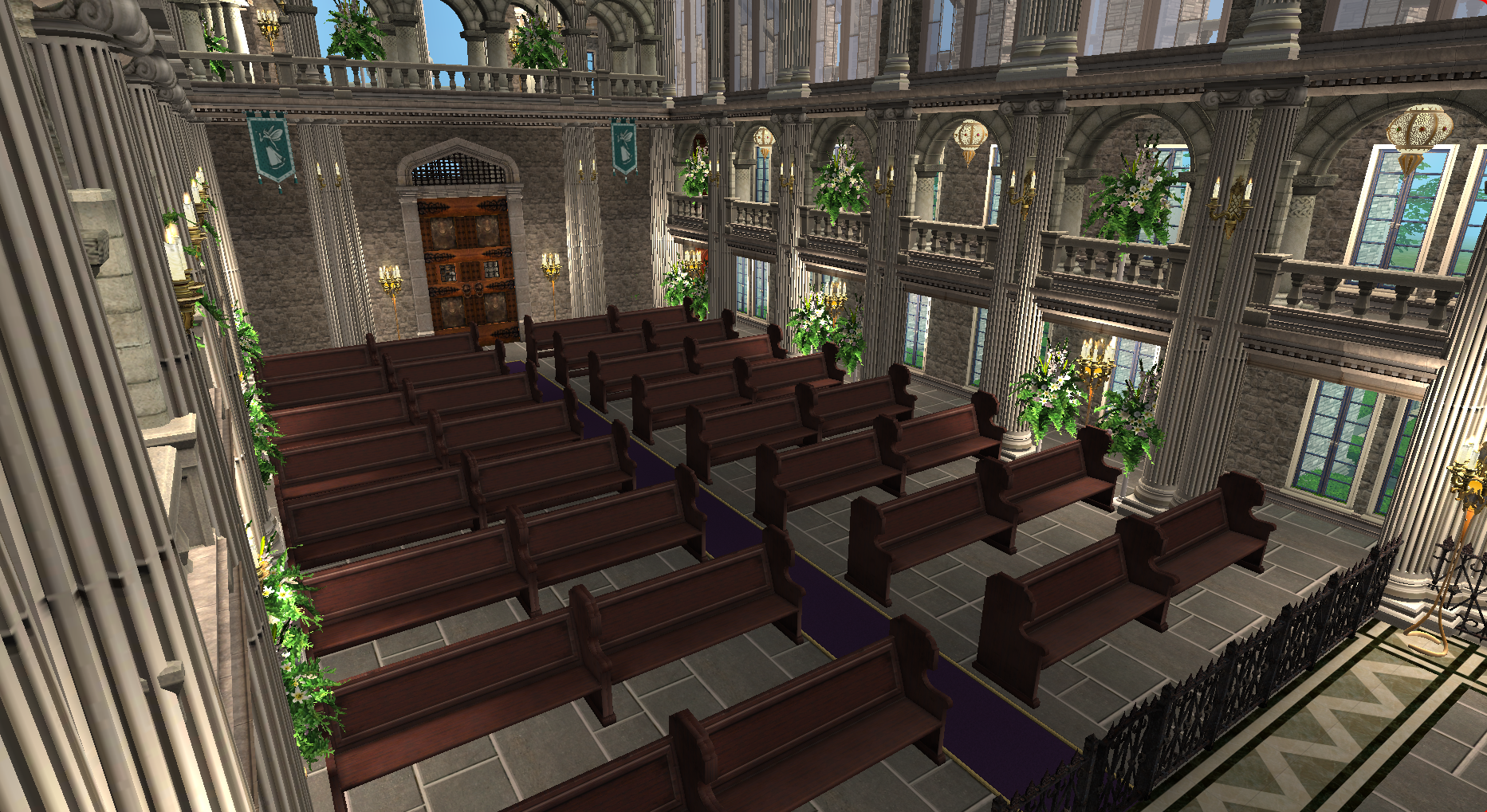 Yet the building itself can never be much more than just a building. The artwork and architecture may help a train of thought that already exists, and for those who already count themselves among the faithful that may be all it takes sometimes, but part of why sacred buildings exist as they do is to promote community, to promote fellowship and interaction and caring among a group of people who all come together in one purpose.

Without a community there can still be faith, and for many it is this kind of individual faith that matters most, but it is hardly the only element of the sacred that exists, and for many people it is the sense of community that most helps them find meaning in whatever faith they pursue. This is why sacred spaces are so often such vast structures- not necessarily out of vanity or a sense of grandeur or accomplishment, but out of a need or the hope of a need for such a space to accommodate the community that comes together in those spaces.

The story of Sir Christopher Wren and the rebuilding of St. Paul's Cathedral that I began with is meant to illustrate this point... a cathedral can be a mere structure to some, a shelter from the elements. To others, it may be an architectural work of art, its construction something to be marveled at and admired from a technical and aesthetic standpoint. Yet neither of these is the true purpose of these places... the place itself does not matter anywhere near so much as the community that comes together as a result. 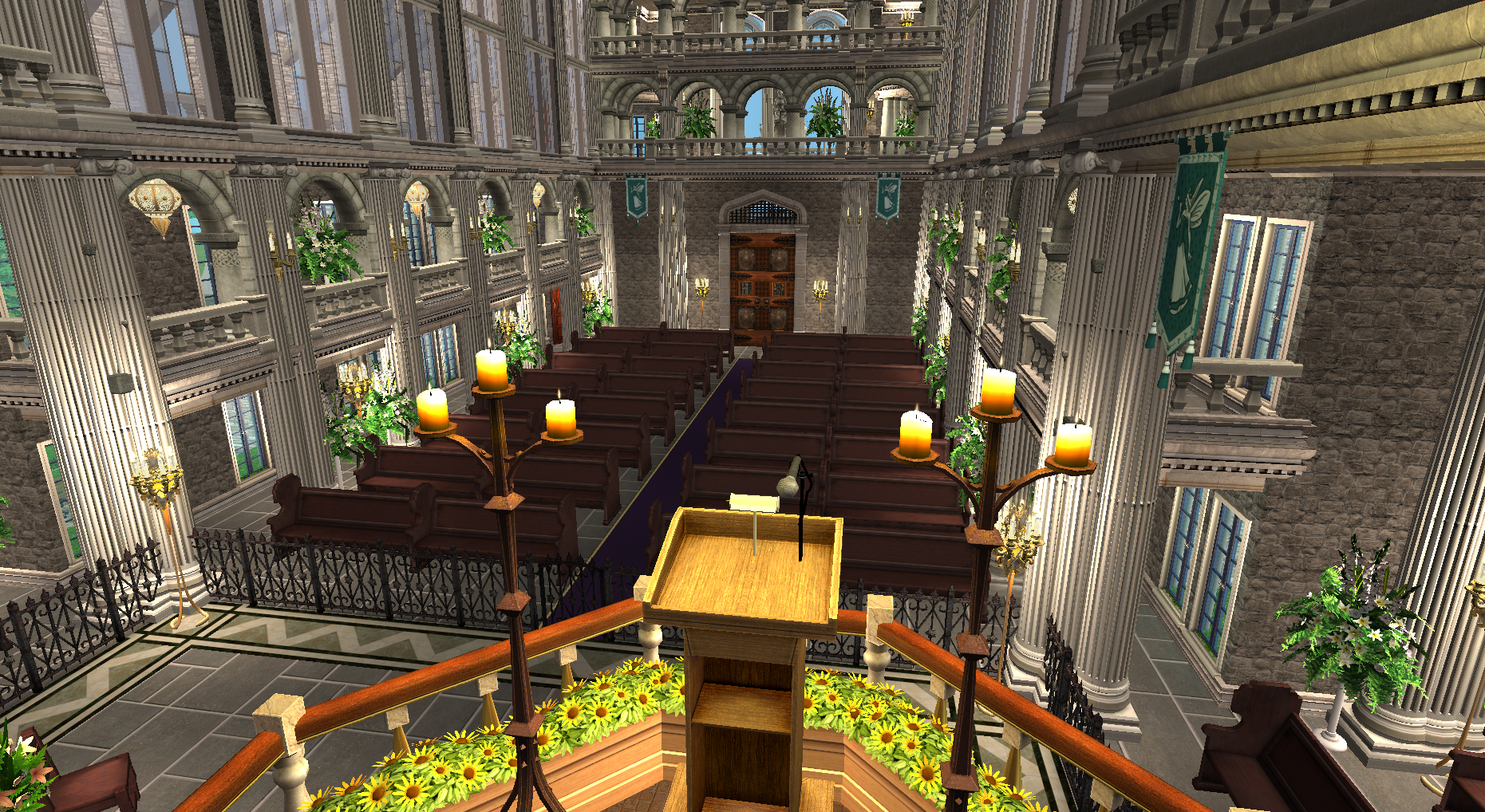 I might have left this lot unfinished for a while longer yet and kept tweaking things here and there, but the truth is that it wouldn't be improved beyond this, it would just be changed, and all the key elements are ones I've been satisfied with for a long time now. And this seemed like the right time to post it.

Easter Sunday is a time that many people would choose to spend with a community that they now find themselves isolated from, out of the need to keep one another safe. There's no denying the importance of this kind of distancing at a time like this, the importance of keeping our loved ones and our communities safe, but there's also no denying that it can make finding the kind of community many would wish for on this day difficult. I would hope in some small way that posting this today at least brings people together in thought if not in practice.

"For where two or three come together in my name, there am I with them." Matthew 18:20 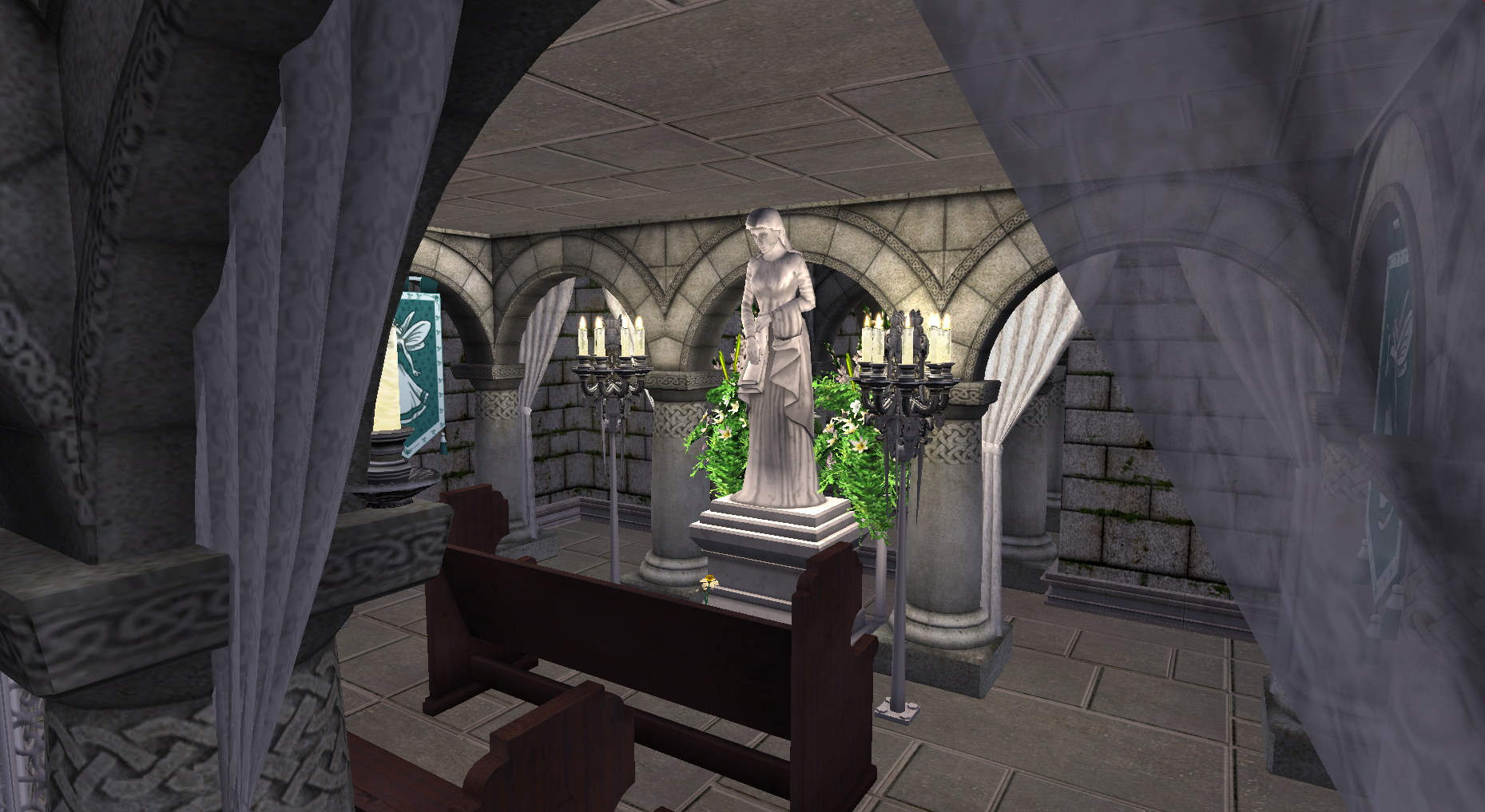 This lot is one I've been working on probably longer than any other, since I wanted to be sure I was completely satisfied with every aspect of it that I could be, and I didn't want to really set myself any kind of deadline with it that would pressure me to just say "good enough" when it really wasn't. In several of my other projects I've noticed that there's a lot of marble objects or stone objects that can be combined effectively into much grander architectural features than just what was included with the game. The same can be said of taking the time to place dozens or hundreds of the smaller architectural features often overlooked in more casual builds, like crown and floor moldings or strategic placement of columns. And of course, making myself exercise enough self-control not to go overboard with CFE elements, but to instead just use them where they were needed. After many years (no kidding) of this, I think the only element that I was never able to do to my satisfaction was a proper vaulted cathedral ceiling... oh well, nothing on this earth can be perfect!

I wish I could say that because it's mostly empty space this lot will be faster than most lots its size, but I can't imagine that being true... there's just so much here to render, I'd expect even fast computers to struggle a little bit with this lot. And it IS still a big lot... it's a 5x6 area, almost $1.9M worth of decoration, and this is another case in which I've used more walls than is permitted with the usual wall limit, thanks to my newest favorite TS2 trick (Thanks again to Numenor, Mootilda, and Little Nemo for making this possible! Keep in mind that this does mean you won't be able to add any walls, and any you destroy won't be able to be replaced, so be very cautious with your remodels!). That being said, there's not a whole lot of unusual interactions possible here, pretty much just places to sit or artworks to look at, so maybe that'll help some.

As always, no CC is required to play this lot in your game, so long as you have all the expansion and stuff packs, and I've playtested a clone of this lot and not found any glaring problems with anything. If in your gameplay you find that you are encountering glitches or problems, please let me know and I'll do my best to address them.

Happy Easter to those of you who celebrate it, and a happy Sunday to those who choose not to!

Back to download view
17 Comments / Replies (Who?) - 2 Feedback Posts, 14 Thanks Posts
Hide Thanks Posts for this thread (Show only feedback)
CatherineTCJD

Amen! What a most perfect offering; and at a time when it is needed the most - in all respects. Amen.
...and thank YOU

This is amazing, as always, and inspiring.
Happy Easter to you too.

He is risen! He is risen indeed!
Please ~ support my TS2 habit! Shop at my Etsy shops:

What a perfect lot to present on Easter Sunday. While it might be difficult to play this lot, it can certainly be put into a neighborhood to bring a measure of art and faith into it.

Extraordinary build, as usual, too.
Victor_tor
Inventor
THANKS POST

my gosh this is impressive :O good job! have a lovely easter!
Liz
Instructor
THANKS POST

I'm just gobsmacked. Really. Would have been suitably amazed by the exterior alone as a magnificent decorative lot, but the inside as well! Just a really beautiful crypt area, and the organ... that organ is genius! Love it!!
goryczka2

I've seen everything, I can die

Amazing! God Bless you, and thank you!
LadySilverwolf
Lab Assistant
THANKS POST

Once again you created some wonderfully stunning, and craftily placed pieces to bring it all together. Even my husband was in awe over this build. To Quote, he said, "That should be pay-ware!"
You are an extremely talented builder, and I love every square inch of love you put into this build.
Thank you for having the insight to share it on Easter. It was very heart touching for me at the very least.

Thank You for the loving detail you gave this build.
Charmful
Link Ninja
THANKS POST

I'm weeping at sheer perfection here. I don't even attend religious services but this is art and majestic AF.
iSandor
Inventor
THANKS POST

There may come a day when I can write how I feel about this, but right now, words seem to be insufficient.
So right now, again
just Thank you
from the bottom of my heart.
attuned
Top Secret Researcher
THANKS POST

Beautiful and inspiring- the lot and the description- thank you!
Little Nemo
Lab Assistant
THANKS POST
#16


"I'm laying a course of stone for this wall, if it please you sir," ~ Numenor

I love the little details! Very creative how you made the bells and floor candelabras