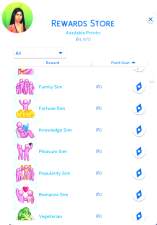 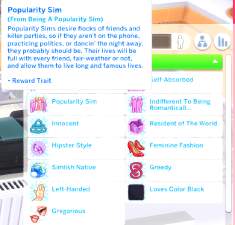 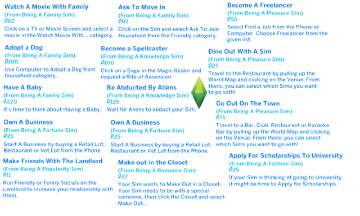 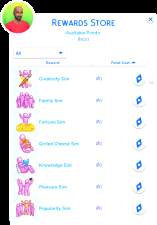 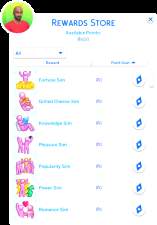 ~ July 30th 2022 ~ Updated for compatibility with the new Wants. Please redownload and delete ANY old version of this mod. Also make sure you have the latest update of the XML Injector.
~ April 18th 2022 ~ New Whims Added
~ December 18th 2021 ~~ June 10th 2021 ~ Multiple updates today!
The Personality Mod is the first larger mod I've made for The Sims 4.

You Will Need: What Does It Do?
The Personality Mod adds 6 reward traits to the Reward Store. Each of these traits are inspired by the six Aspirations from Sims 2: Family, Fortune, Knowledge, Pleasure, Popularity and Romance. Each trait costs 0 Satisfaction Points, so you can add the traits to newly created sims, straight out of Create-A-Sim.

Each trait has it's own set of Whims and those whims are directly inspired by the appropriate Wants from Sims 2. Because of this, the reward traits act like a base personality and influence the whims your Sim puts in.
For example, a Fortune Sim may wish to own their own business; a Family Sim may want to have a baby or adopt a dog; A Knowledge Sim will be curious about the supernatural etc.

The Aspiration Addon Package
With the update on 18th December 2021, I added a separate addon package contain three new traits: Grilled Cheese, Power and Creativity, due to popular request. These are NOT essential but more an optional extra, should you want them.

The Whims
While there were some excellent whims available to suit each trait, I felt like many were missing. As a result, I set about creating my own. This mod contains around 40 new whims, each associated with the six reward traits. Among those whims are several whims for individual careers. Each of those whims will only turn up in a Sim has certain traits or skills, so they won't be random.

Once again, the new whims are based on Wants from Sims 2 and should line up fairly nicely.
The exact whims for each trait are as follows:

Have A Dream Date

Travel To Park With Grandchild

Travel To Beach With Grandchild

Have A Dream Date

The Custom Whims are now in a separate file and can be downloaded here: The Custom Whims Mod
The Personality Mod package contains the reward traits and has attached to them all the Maxis whims relating to those traits. The additional Custom Whims package has all my custom-made whims inside it. Download both if you want the custom whims too.
This mod is Base Game Compatible.

Known Issues
~ The Grilled Cheese Sim trait currently has no Wants attached to it. This is because Maxis decided not to update any of the whims I’d used with this, so I’ll need to do it myself. Watch this space!

Conflicts
This mod doesn't conflict with any other mods at this time.

Planned Updates
In the future, I plan a few updates for the mod:
~ New whims: I want to include some new whims relating to later packs. Additionally, I want to include a few more to line up better with Sims 2; particularly for Pleasure, Family and Romance sims.
~ Interaction Menu: I have had a request for an interaction to add the traits to the Sim, so I will be working to include this in an update soon(ish).
~ An interaction to allow Sims to discover another Sim's personality.

Credits
Without the following people, this mod would never have come to light:
AnotherPlumbob, for the idea and for early testing and feedback.
Zer0 and Mirai M on Discord for their input and suggestions to get started.
ChippedSim for answering my questions.
Marco for helping getting targeted whims to work!
Scumbumbo for creating the XML Injector and Triplis for updating and maintaining it.
Zerbu for the Mod Constructor
The creators of Sims 4 Studio
Sabrina Garcia, Britt Boons, Hendrik McSims, Kimikosoma, Viniciusvill, webkinzfrog, Origamika Group, Isy, Josie, GreenOnionC and Joliebean for translating!

Pleasure Sims love wild nights out, cozy nights in, and what most Sims would consider "the good life". They'll want to use objects that provide them with fun and comfort, while avoiding activities that cause stress or equate to work of any kind. Pursue their whims of the moment, as these Sims can change their tastes on a dime as they travel on their path to the ultimate life of luxury.
Ages:

Family Sims long to be part of a big, happy family. They need "Quality Time" with family members, and lots of meaningful interactions with all the branches of their family tree. Keep them overflowing with familial bliss, and they'll live long and "fruitful" lives.
Ages:

Fortune Sims crave money, rising to the top of their careers, and just plain expensive stuff. They'll need all of these things in spades to keep their fiscally minded lives long and happy.
Ages:

Popularity Sims desire flocks of friends and killer parties, so if they aren't on the phone, practicing politics, or dancin' the night away, they probably should be. Their lives will be full with every friend, fair-weather or not, and allow them to live long and famous lives.
Ages:

Romance Sims crave lots of lovin' with as many different Sims as they can find, so setting aside the time for them to chase those hot prospects is key. Fill their lives with hot steamy nights and lust-filled days in order to keep Romance Sims' lives long and exciting.
Ages:

Excellent performance and career success is of the highest importance to a power seeking Sim whose professional accomplishments are essential to fulfilling this dream.
Ages:

Creativity Sims love to experiment in all aspects of their lives. Whether it's inventing new recipes in the kitchen or making sure their wardrobe is at the cutting edge of modern fashion, they're always doing their best to find a creative solution to life's challenges.
Ages:

The Hobby Mod
The Custom Whims Mod
Back to top

CREATION POLICIES
SIMS 4
- By all means, edit anything but for your own use only please.
- Don't reupload my work with your changes.
- Don't upload or share any of my work on SimsDom or other similar websites.

For my careers, object edits and clothing recolours, visit MissyHissy's Grotto of Gifts.
For my mods, please visit The Project Corner.
If you wish to support my work, I'm on Patreon. My mods will always remain free.

SIMS 3
-By all means edit my careers, activities, apprenticeships or 'degrees' but for your own use only please! And drop me a PM if you do make changes, I'd love to know what you've done :)
-Don't re-upload my careers, apprenticeships, activities and 'degrees' with your changes.
-Don't claim my work as your own. Be a little respectful, this stuff takes a lot of time and planning to perfect.

I'm currently NOT taking any more requests for Sims 3 Careers. I have done lots and I have lots more still to do on my list.
Recently, my inbox was full and I realise people couldn't PM. If ever you can't PM, please email me at [email protected] :)
Check out my other Careers at MissyHissy's Job Centre and visit my forum at MissyHissy's Job Centre Forum.
For further information on my custom 'degree' careers, please visit MissyHissy's College of Further Education.
For my Afterschool Activities, Apprenticeships and Teen Jobs, visit MissyHissy's School For Gifted Sims.