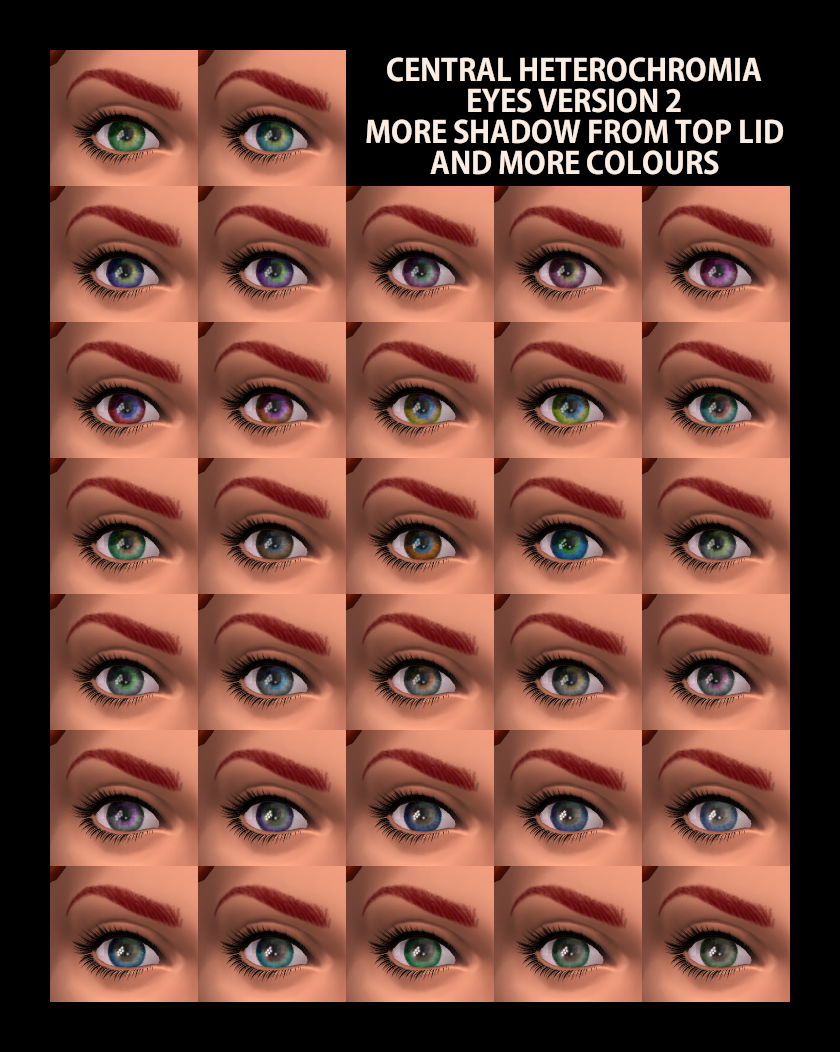 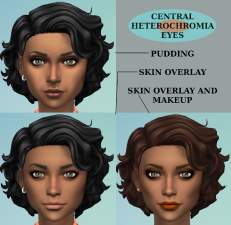 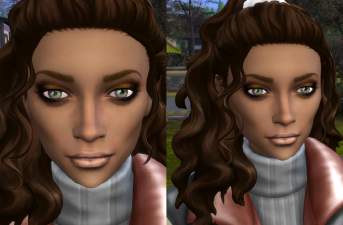 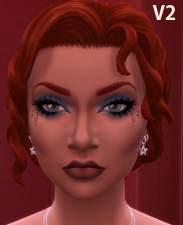 UPDATE 26JAN21: I have added a new version of these eyes which have a more pronounced shadow from the upper lid, and a total of 32 colours. Do not install more than one package or they will conflict!

"Central heterochromia is when the inner ring of the iris — the eye color closest to your pupil — is a different color than the outer ring, along the edge of your iris. This trait usually involves both eyes, with two separate colors appearing in each eye instead of one. Central heterochromia is almost always harmless when you’re born with it.

The visual appearance of central heterochromia comes down to a pigment called melanin — the same pigment that determines the color of your skin.

When melanin is distributed differently closer to the pupils, light reflects off of it in a different way and gives the appearance of two different colors in each iris.

A common form of central heterochromia shows up as predominantly blue eyes with a smaller ring of brown in the center streaking outward." - https://www.allaboutvision.com/cond...-heterochromia/


This upload consists of 23 colours of central heterochromia eyes. They are in the "eye" category in CAS, and are for all genders/all ages/all outfit and archetype categories, Human, Mermaid, and Vampire, and tagged by colour as best I could. The files were created as an Add-On set of swatches, so they are not default replacements, merely an addition.

As such, they are genetic, so there is a chance your sim babies will inherit them

There are 2 files to choose from, install only one as they will conflict with each other.
ALLOWS RANDOM - allows random NPC's to have the eye colours
NO RANDOM - only the sims you put the eyes on will have them

My other eyes can be found HERE.
Back to top

Welcome to my world!

***THANKS TO EVERYONE WHO HAS DOWNLOADED ANY OF MY CREATIONS! YOU HAVE HELPED ME REACH 3,000,000 DOWNLOADS! MUCH LOVE***

16AUG2022: It has come to my attention that it's difficult to navigate my mods on other sites, and I agree. I have a listing with links on my Tumblr directly to my content, so feel free to check that out :) CLICK HERE
21JUN2022: There are no hats allowed for random in the new Werewolves GP :)

SPECIAL NOTE: You may have noticed I'm linking some of my mods to my Patreon. This is because it's a lot of work maintaining mods across multiple platforms. I truly appreciate all the MTS members who have supported me over the years, and I hope it isn't too much trouble for you to find me there (link also at the bottom of this profile blurb). Any game mods that have recently been updated have a link in the comments to the mod's page on my Patreon, including careers. Everything is still FREE! Not to worry :)

Feel free to use my stuff in your pictures and whatnot. I don't need a link back for stuff like that, but it's always a nice gesture :)

Please always link back to the download page of anything you might use as part of a creation, though. For example, makeup on a Sim you're uploading, or a recolour as part of a lot, etc.

You MAY NOT upload my creations anywhere else unless you link back to the original post for download. You MAY ONLY provide direct links to my uploads on other sites that do not require a paid membership. My content is free. Access to my content should also be free. Please respect this.

Please, please, please leave any feedback in the comments section of a particular upload. I do my best to stay on top of my mods, but if for some reason I've missed something I rely on all of you to let me know, and it's greatly appreciated, along with your continued support!