Stop Swinging Before You Puke 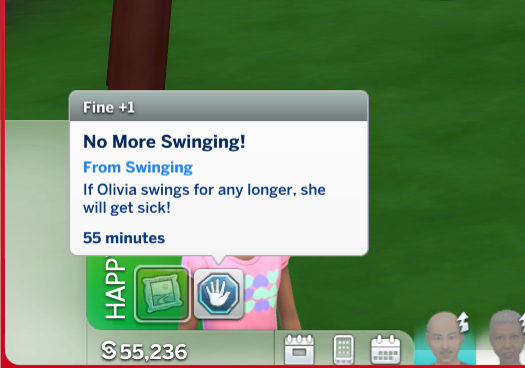 433 Downloads 24 Thanks  Thanks 10 Favourited 1,438 Views
Created by Dreamfly
View all Downloads
Uploaded: 28th Jun 2022 at 11:46 AM
I got annoyed by my sims getting nauseous from swinging on the swing set, so I created this mod. Instead of becoming nauseous, sims will receive a "warning buff" and automatically stop swinging. If a sim starts swinging again while the warning buff is still active, there is a high chance that they will then become nauseous as usual.

Pack Requirements: requires at least 1 of the packs that contain a swing set (Seasons, Island Living, and Little Campers Kit)

Mod Details:
Compatibility: Not compatible with any other mod that changes the following XML files
Other Information