Things you may want to know

Many thanks to everyone who has provided information, and to those who've made mods and/or programs which have made the things I'm interested in trying to do with the Sims 2 game possible, especially Numenor and the SimPE team. I also appreciate the useful programs and advice that Mootilda has shared, and thank her for those as well as all of the extra help she has given as I've updated and fixed my subhoods.
Thanks also to Leesester and the upload moderator/s here at MTS who have helped or answered my (probably dumb) questions!

TOU
My lots are generally inspired by my imagination, the sim/s I'm building for or the media in some way or other. If it's a themed lot or 'hood, then I'll look for something suitable by searching Google images and relevant websites for buildings that appeal to me and look as if they will work in the game. If another lot looks like mine, and comes from anywhere other than my head then I don't own the images I'd have used, and it's highly likely that other people have seen them as well and might make something similar. If you straight out upload my lots as your own, that's not nice but I can't stop you!
TSR don't take whole TS2 'hoods; they already have a few of my lots because I've previously uploaded some there.
I prefer my neighborhoods and subhoods to be kept in places where people can access the relevant information and instructions. I know people have passed them around before, and again, I can't stop that (and I've sort of appreciated that someone liked them enough to want to do that!). But from time to time, downloaders have needed different levels of help or support, and I'd rather be aware of the trouble they're having in case I need to rewrite the installation notes or update or fix something that hadn't previously shown up in testing.
Thank you very much for your interest and I hope you find the things I've put together useful!

Requests
Maybe, because that's how everything else I've done has come about. If you have a theme or style idea for a subhood I don't mind being asked, though I won't promise to say yes! I feel more inspired to start on something if I think someone other than me will have a use for whatever I'm working on! I enjoy the planning and idea gathering that comes about while making neighborhoods and subhoods, and have usually found it interesting to work as part of a team on a project.

lechapeau has 1 downloads in the following areas of our download section: 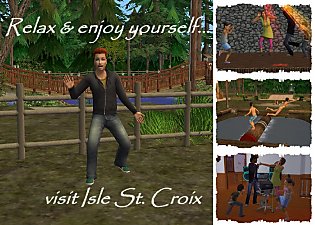 lechapeau is a member of the following groups: