The Lost Ruins of Rhumm Kaaz - Tropical
Round 2: Entertainment Lot 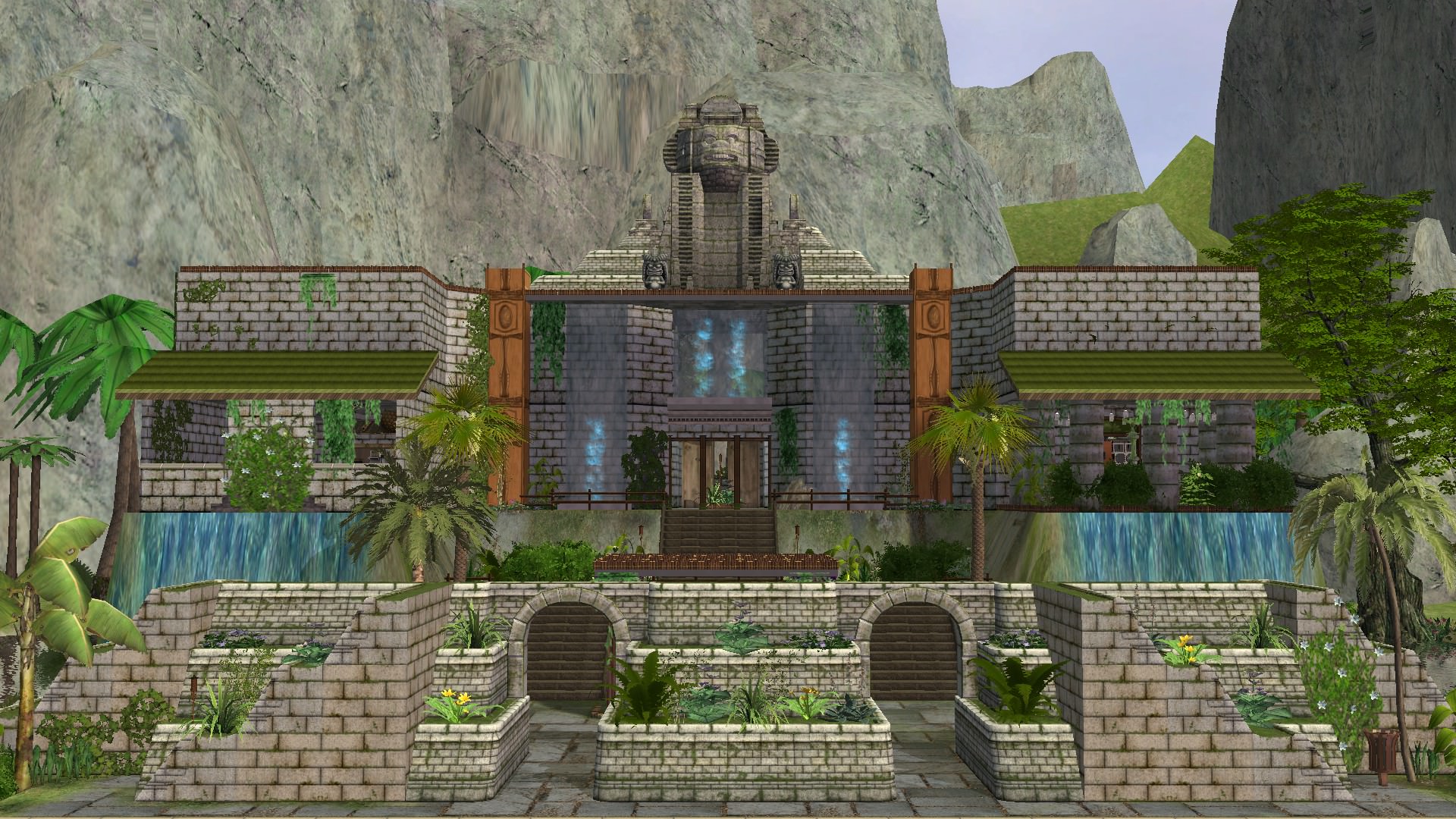 It is well known that there were ancient civilizations building on Twikkii far before the tourist industry boomed. We can attribute this fact to the Ruins of Numchuck and Jumbok IV, and while those are 'Ancient' and 'Majestic', Wanderlust Inc. is excited to reveal the Lost Ruins of Rhumm Kaaz - a piece of history found preserved in the Island's Mountains. There's a twist to Rhumm Kaaz however - they are the Twikkian deity of natural revelry and nowadays the main demographic of visitors that fit that sphere of influence are the Spring Breakers from all across Sim Nation and beyond. Wanderlust Inc. has fused the ruins into the island's epicenter of late night revelry - not only is the area prime for explorers and history buffs, but those who like to party as well!

The temple seems to be constructed on a natural spring which feeds into surrounding ponds, plenty of waterfalls surround the exterior, causing a cooling effect on the interior of the temple. It has been overtaken by many plants and time has taken it's toll but has overall been generous in preserving the structure. It has three rooms - the entrance foyer, the throne room, and the alter room. 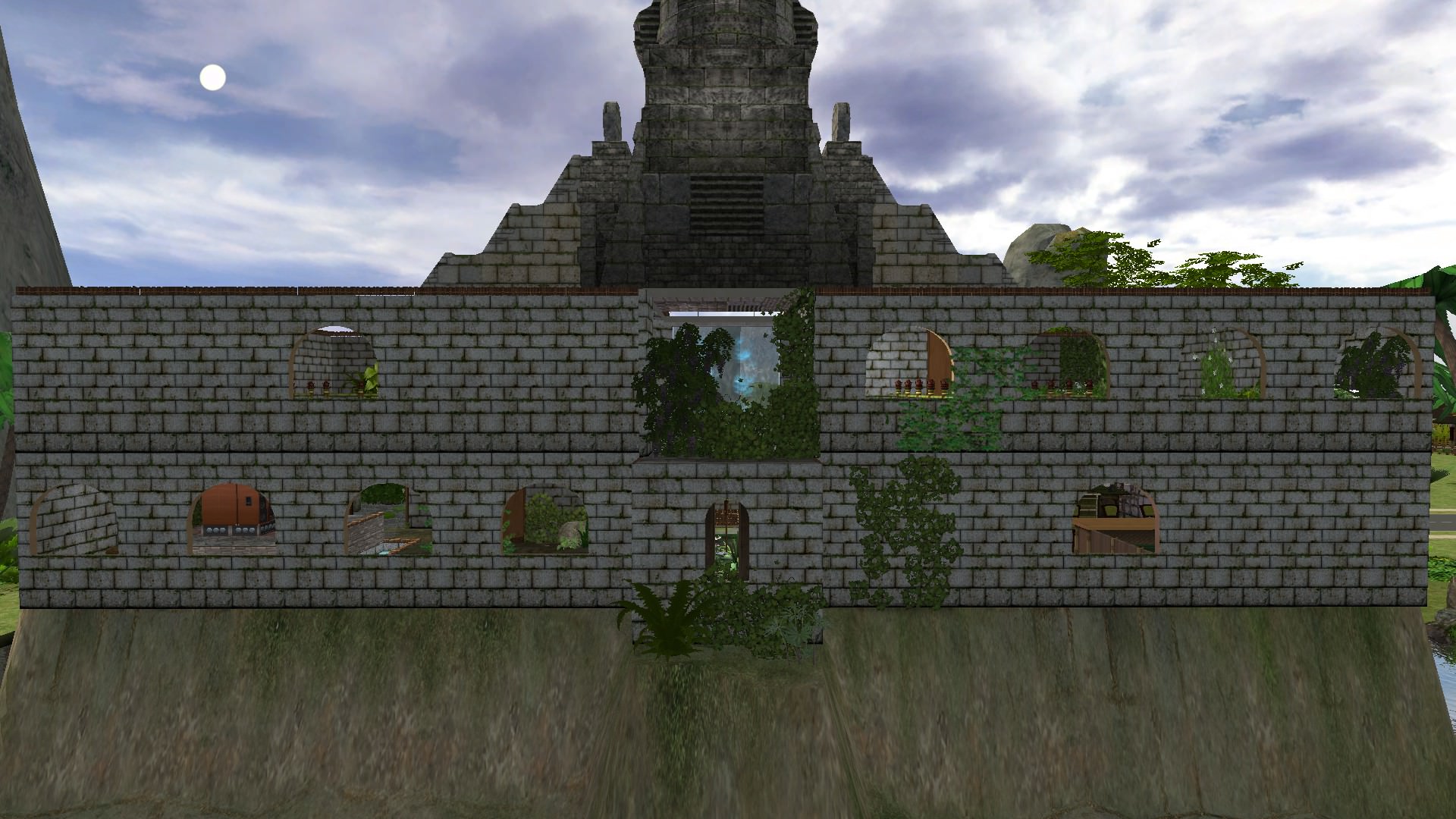 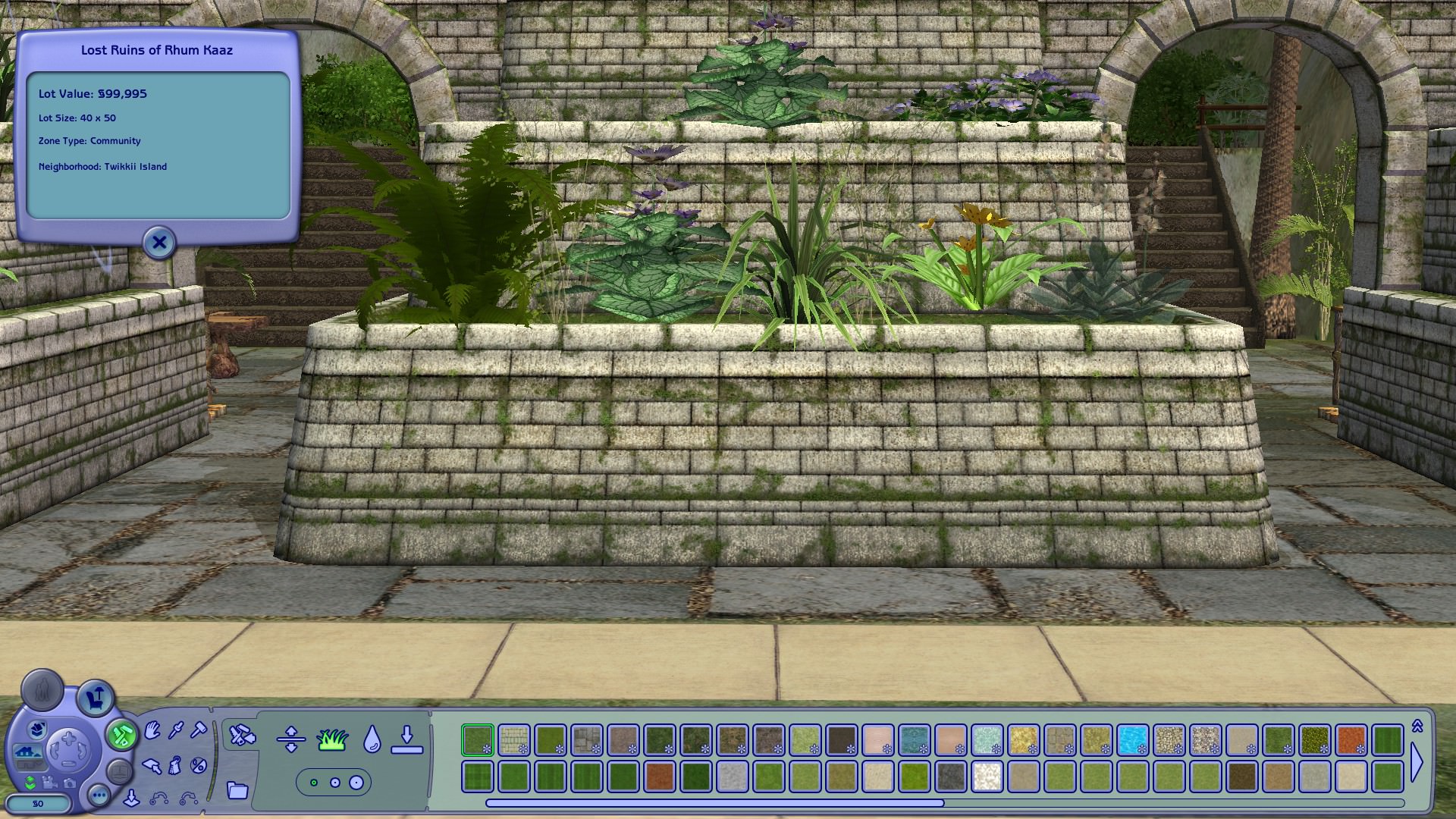 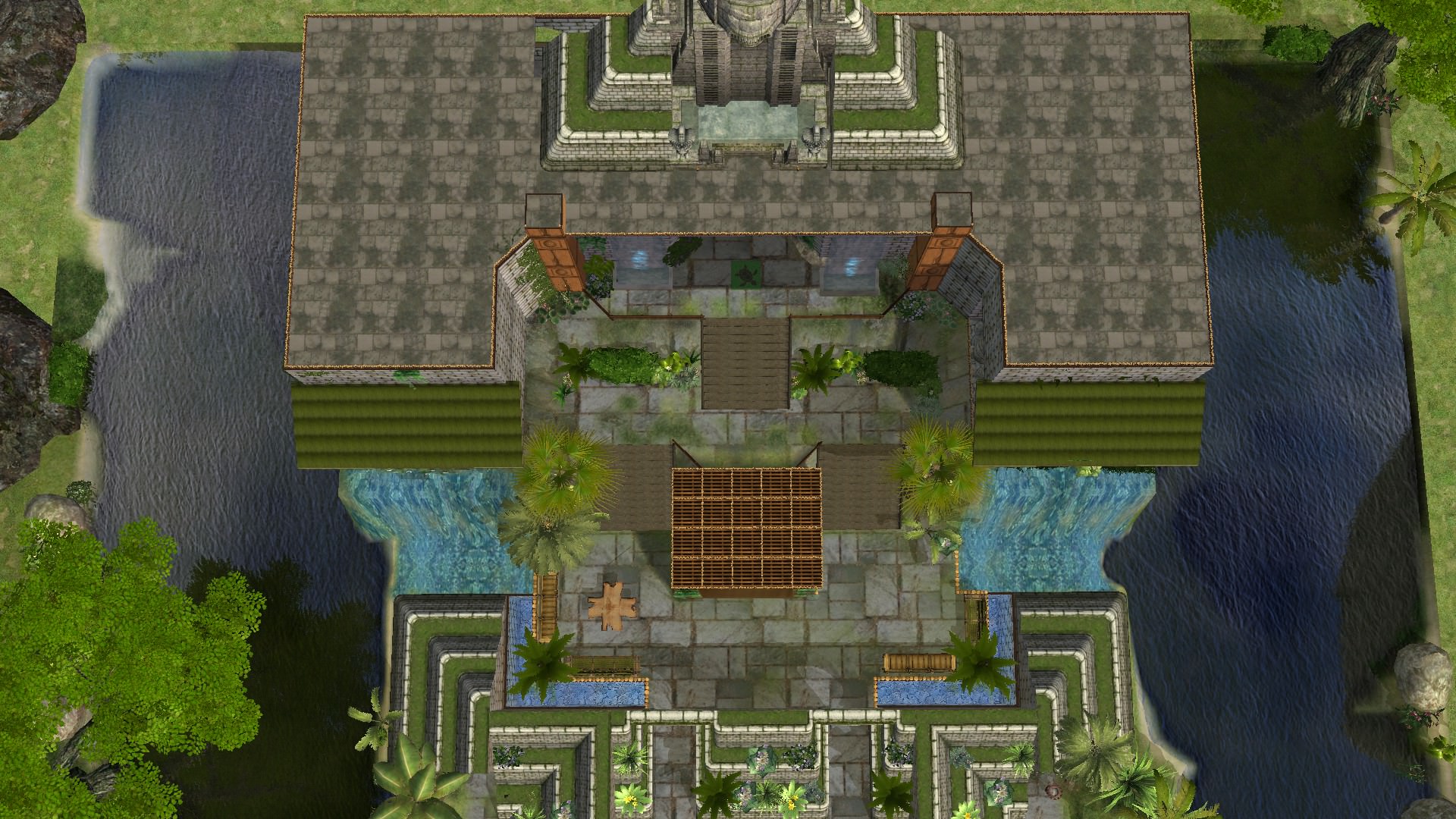 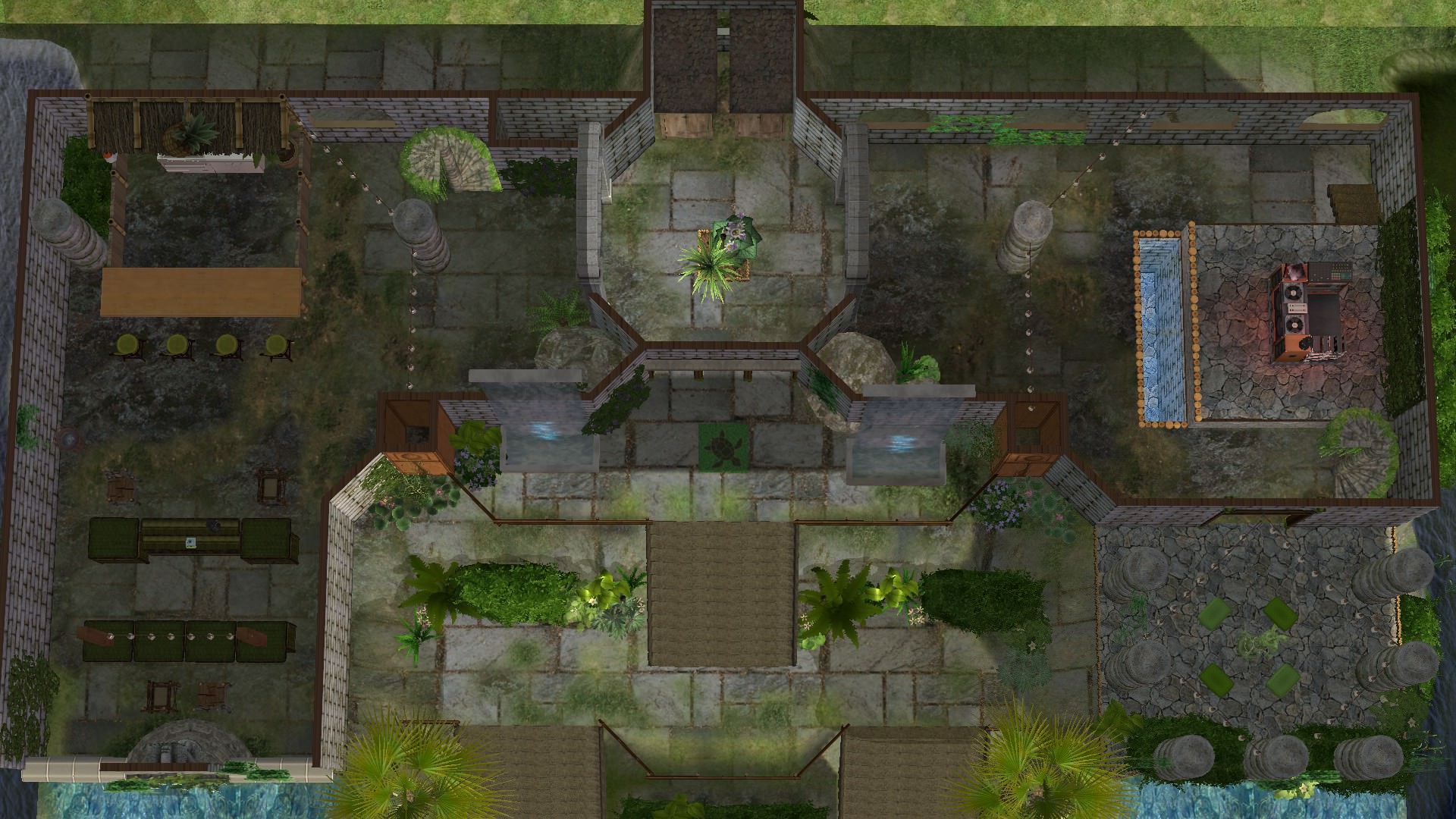 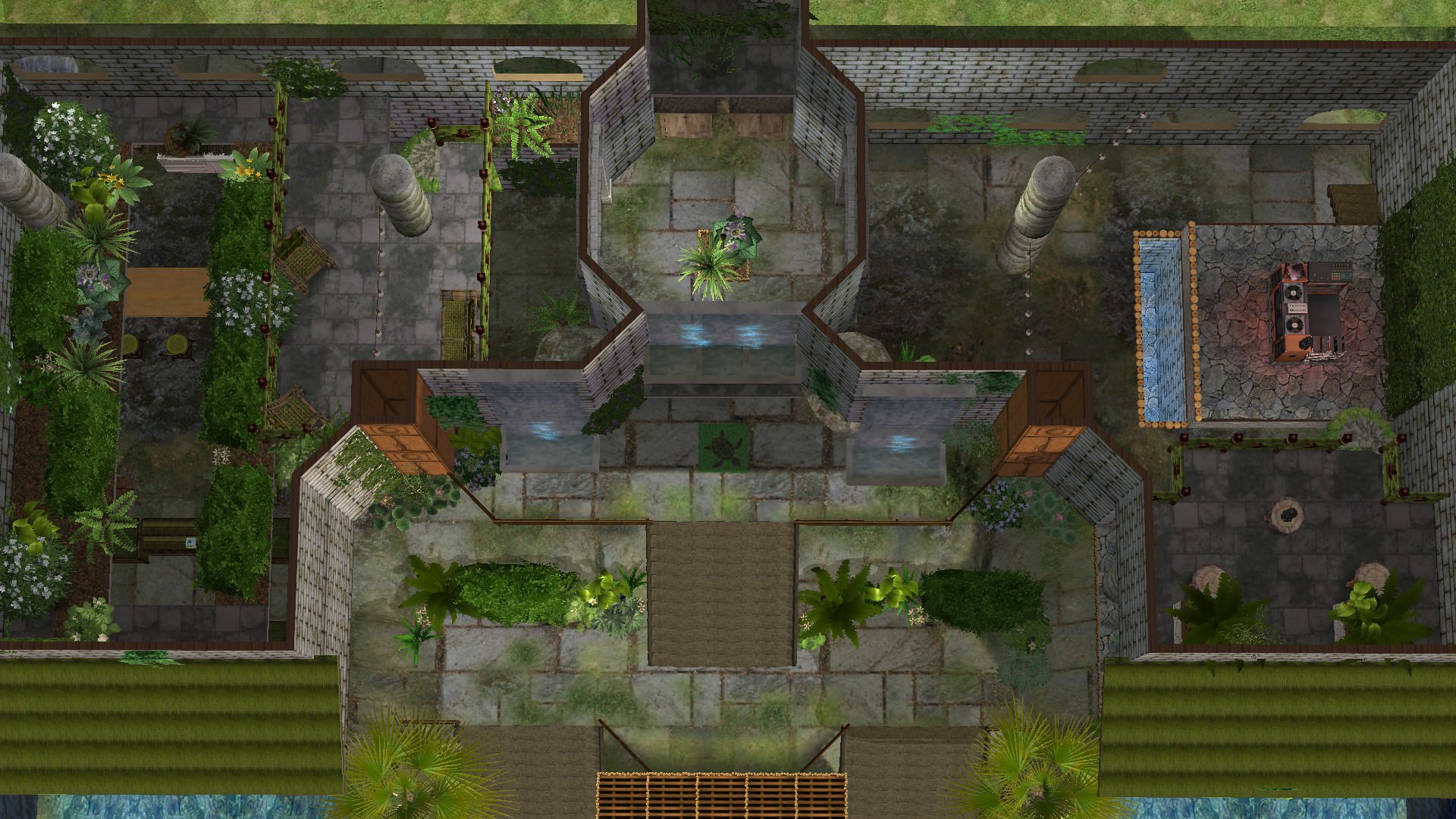 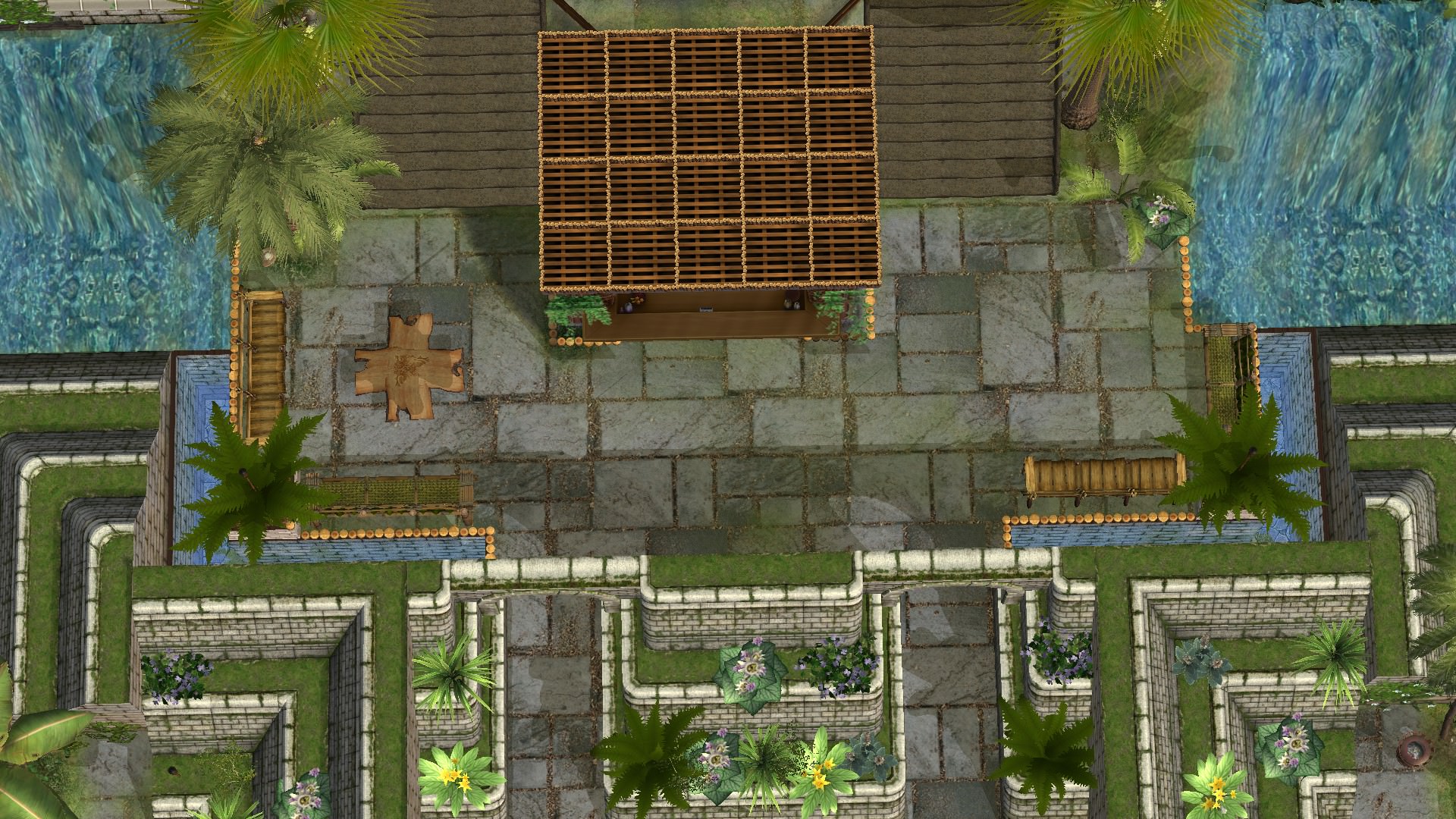 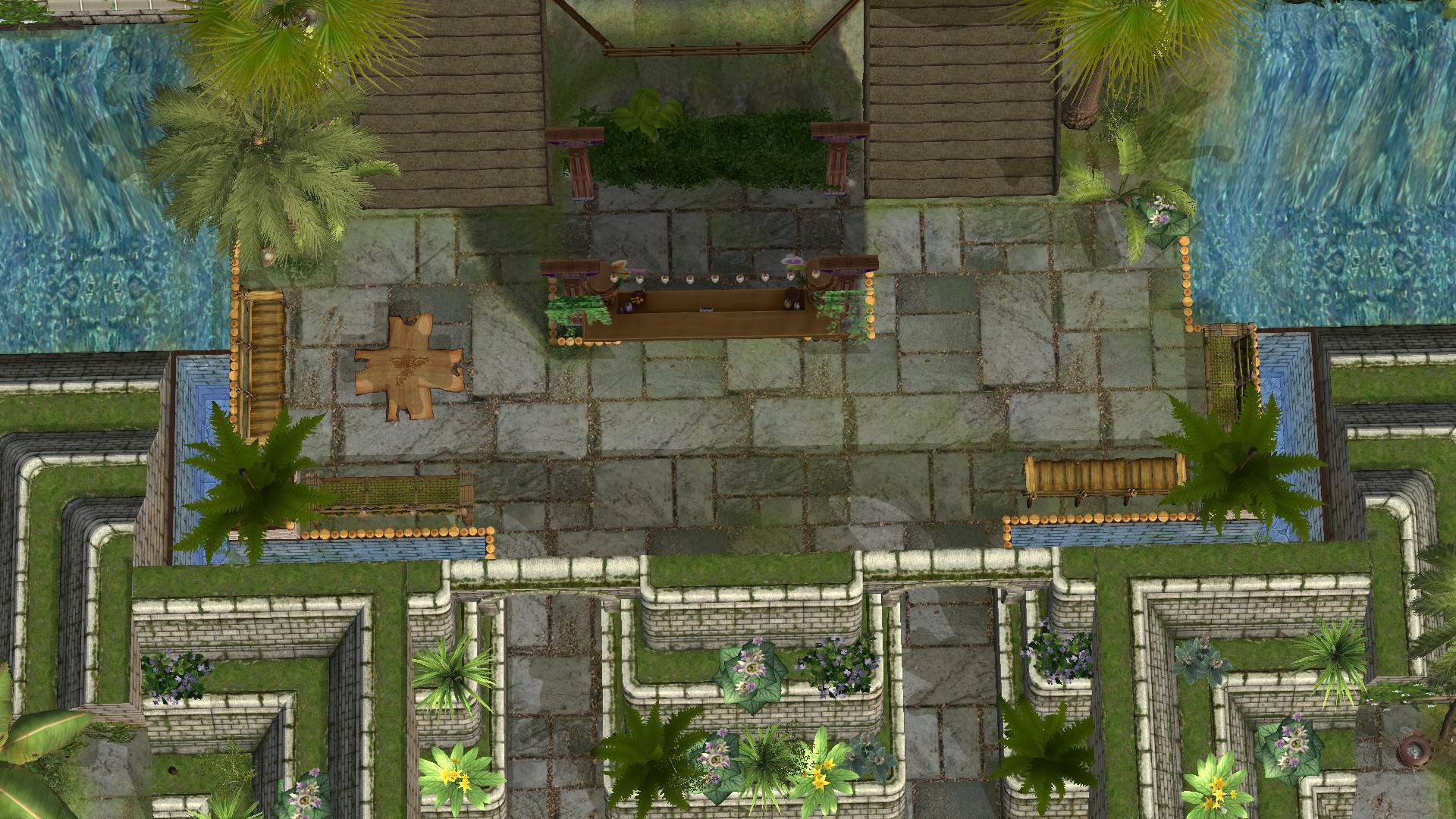 FOYER
The Foyer, which is the smallest room is seen right as one enters past triple waterfalls after climbing two tiers of stone stairs, it is a tall room with some missing walls due to the test of time but it was clear that the back of the room was a waste site, constructed there now are some privies. There is no indoor plumbing as Wanderlust inc wanted to keep the lost ruin as untouched and rustic as possible while still delivering a revelistic atmosphere for the modern age! 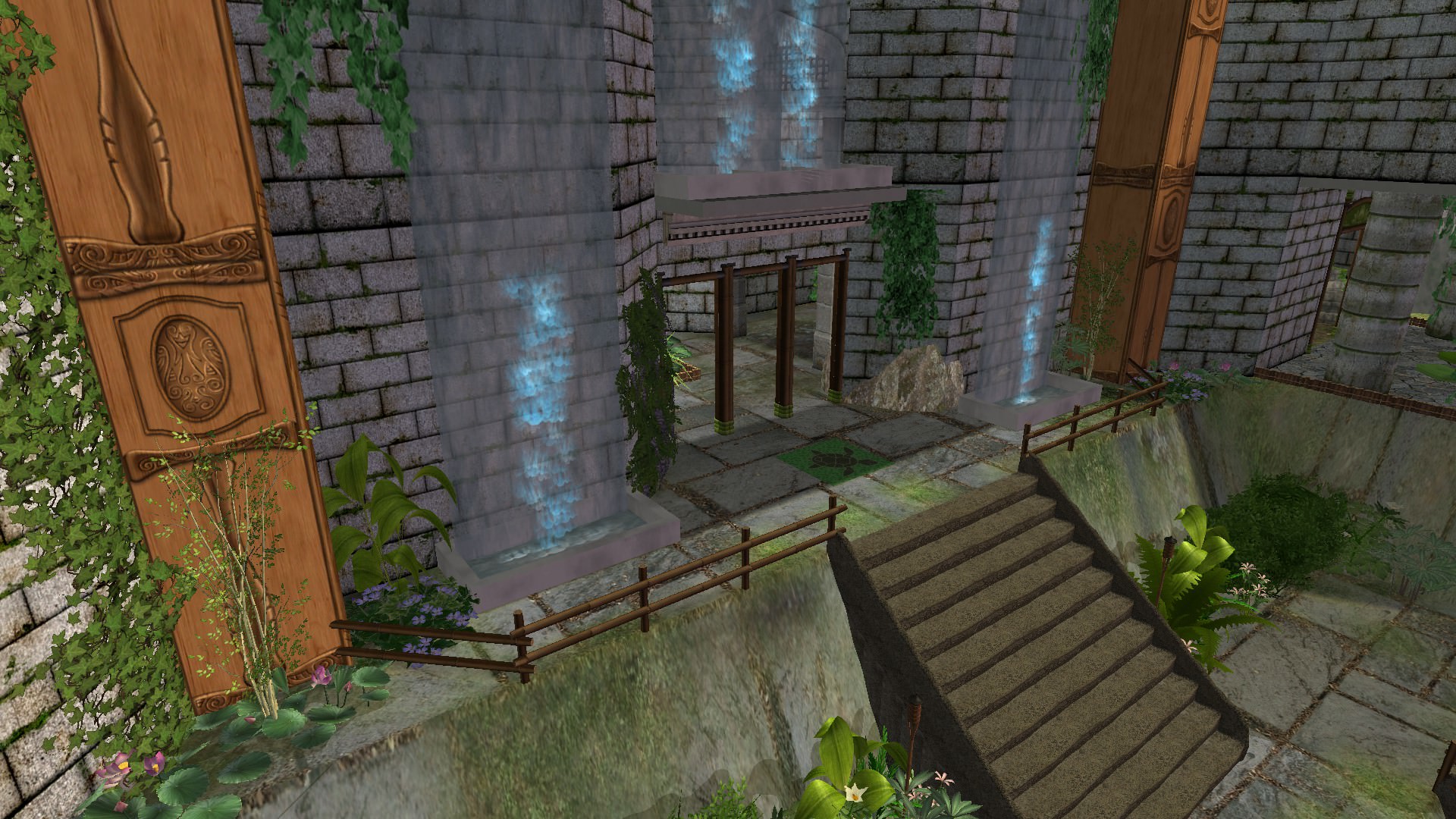 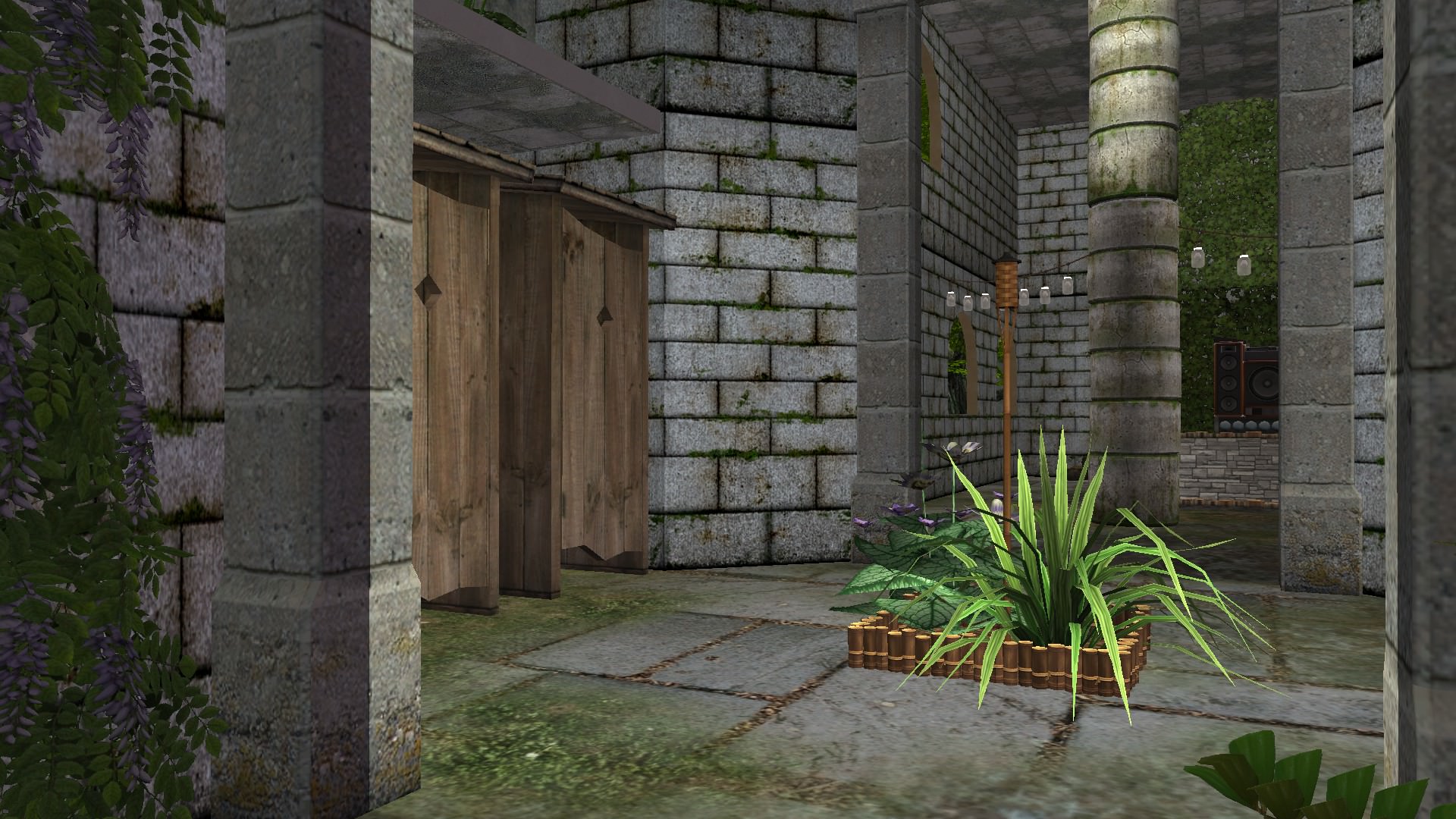 THRONE ROOM
Archaeologists discovered through recovered artifacts that worshipers selected a 'speaker' of Rhumm Kaaz who lived in the temple and sat on an elevated throne in the right wing of the temple. The Speaker informed worshipers of the will of Rhumm Kaaz, what type of revelry should be had or offering should be made in the temple. The sitting spot has long crumbled but the elevated platform where it stood is still in tact and that is where a DJ spins beats for dancers. In a way, the revelry is still going strong under the roof of Rhumm Kaaz! 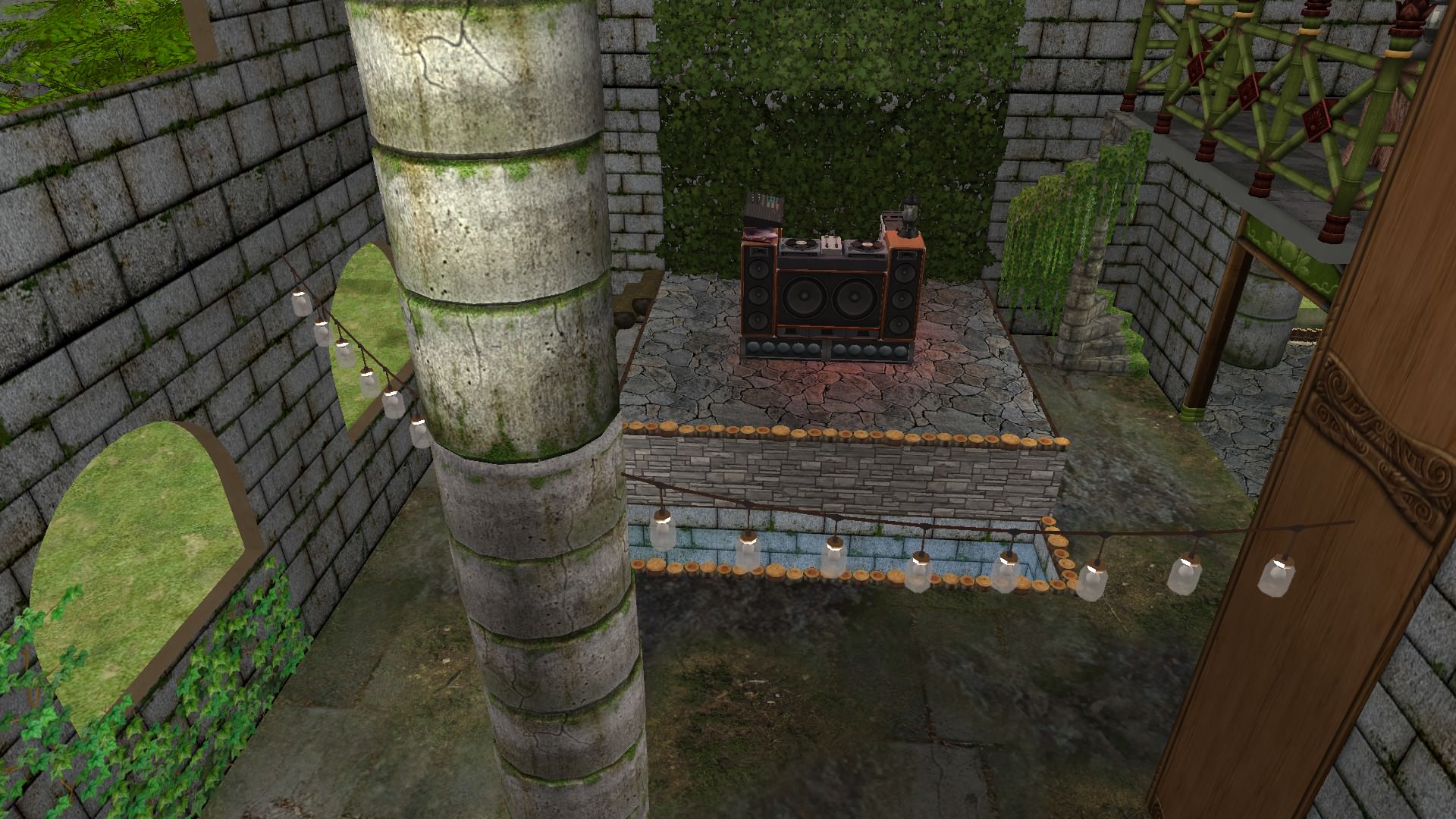 There is also an overlook to the throne room, that was believed to be the sleeping area of the speaker but is now used as a place to watch the dancing and mingle with other revelers. 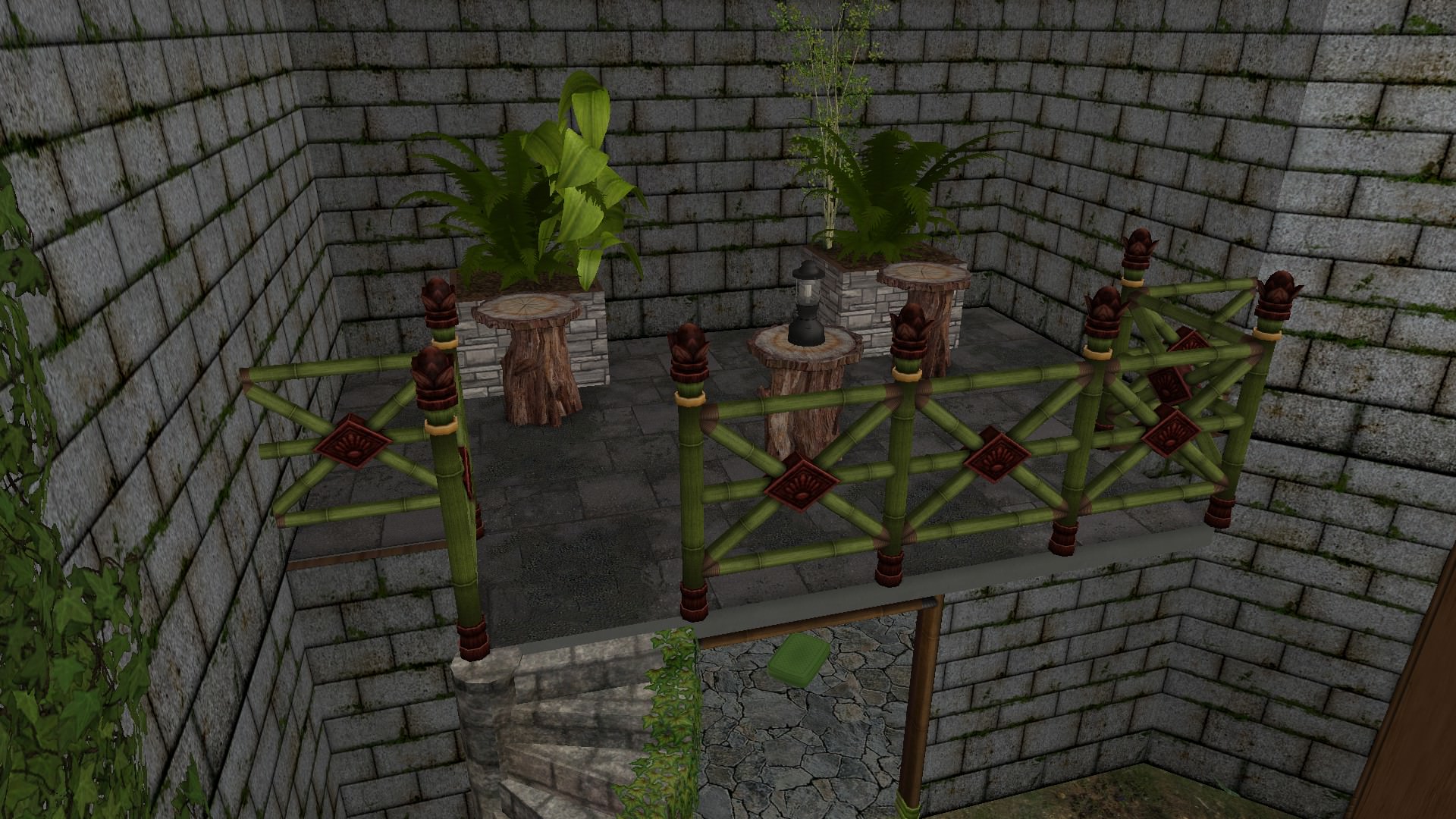 There is an exit that leads to a stone terrace that overlooks the island and one of the waterfalls, though vegetation has taken to growing around the edges. Out here, archaeologists assume it was a place of recreation. Though no artifacts were found to indicate what types of games were played, Wanterlust Inc. has installed a bubble blower in this area as the wind current drift through at nice angles and can carry the bubbles outward. 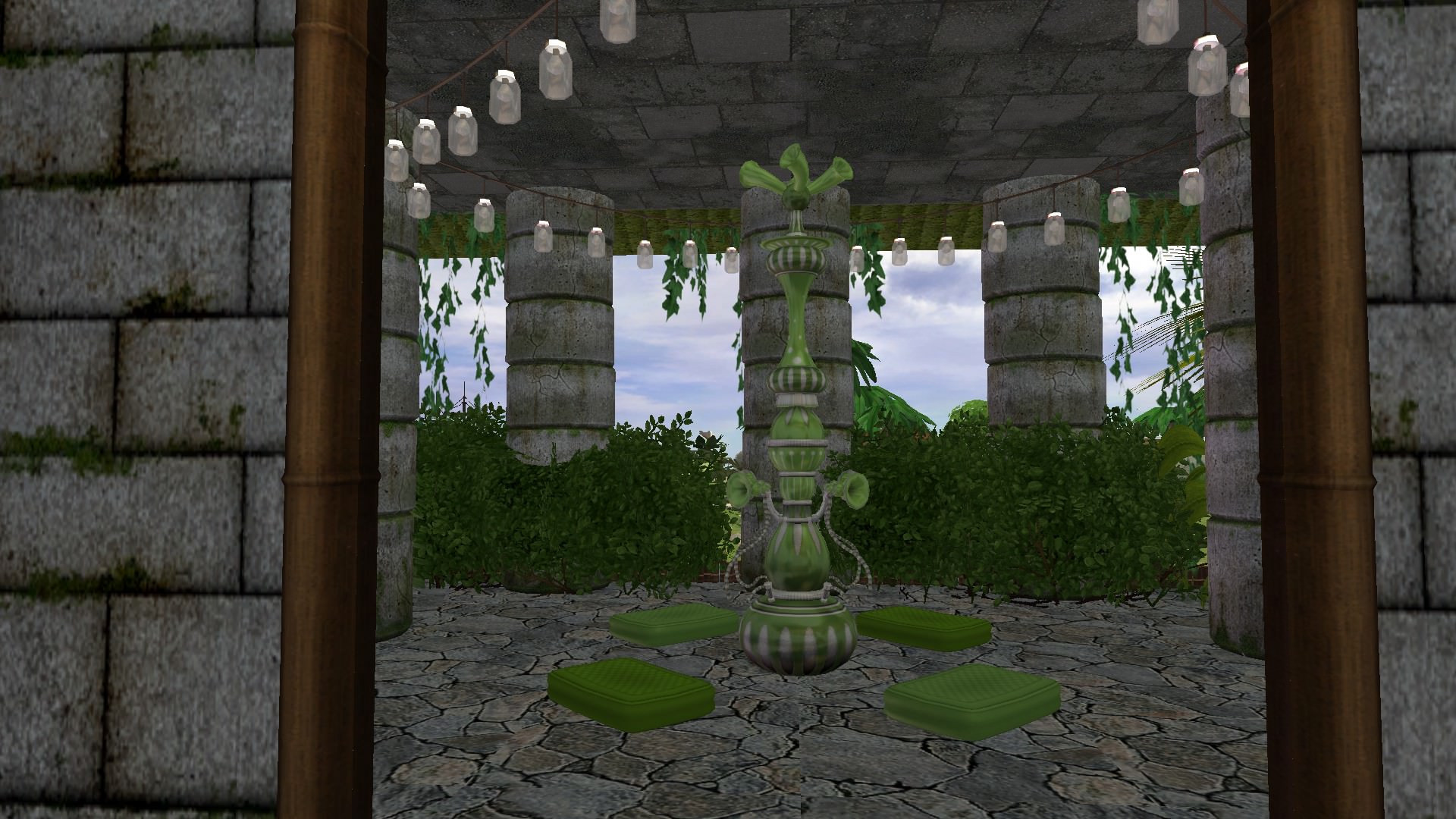 The left wing of the temple was the Altar Room. At the front near the open windows is still a statue and pedestal of what is presumably Rhumm Kaaz's likeness. The Alter room contains food and refreshments for a parched or hungry visitors. There is a small upper area in the Altar Room that acts as a lounge for visitors to relax in, the furniture, while not originals were constructed to what archaeologists thought may have been used at the time the temple was an active place of revelry and worship. There is also a stunning shelf overhang area that has been overtaken by nature in the form of vines, tropical bushes, and flowers that create an overall pleasant perfume, yet damp smell in the area. 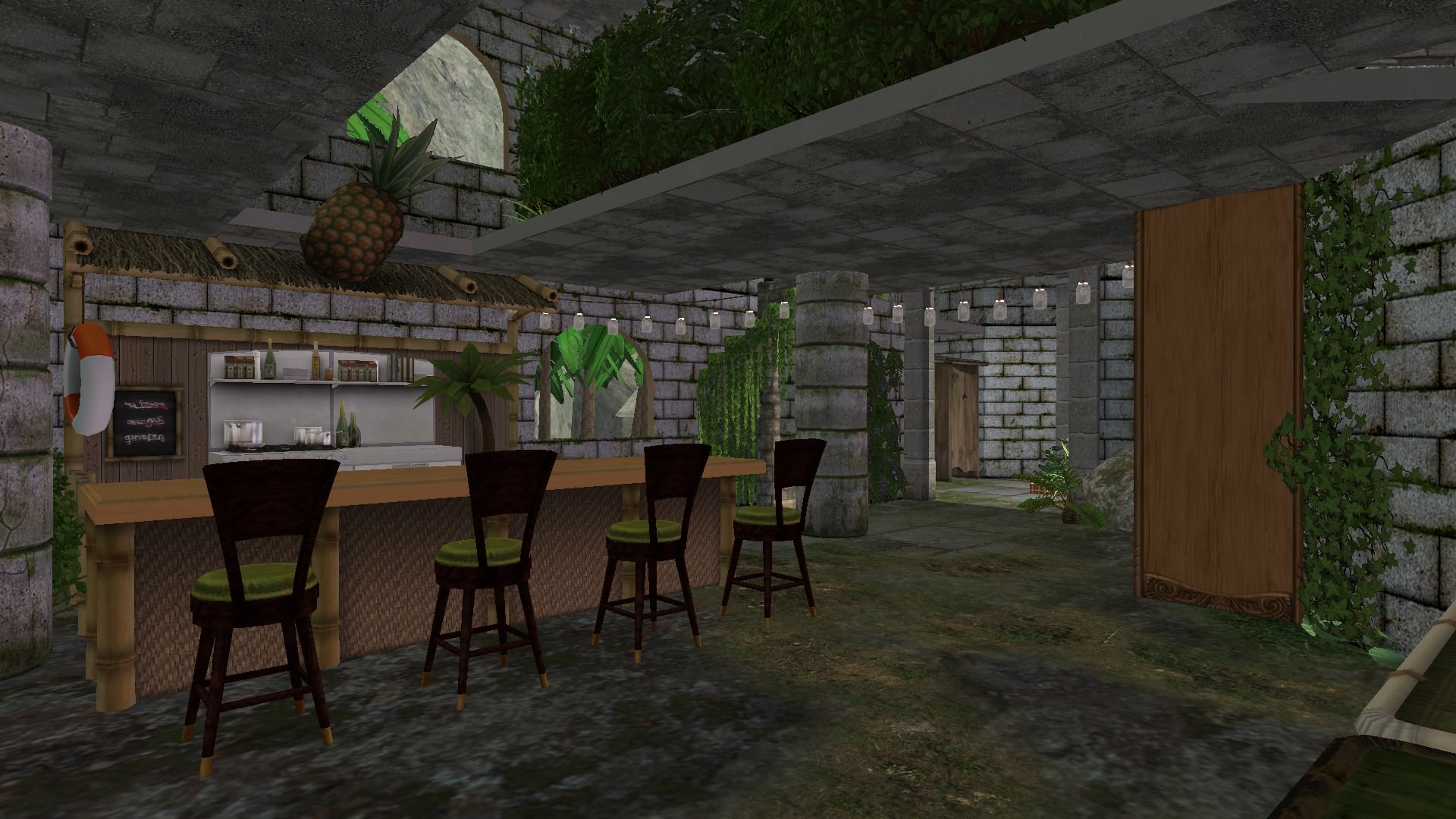 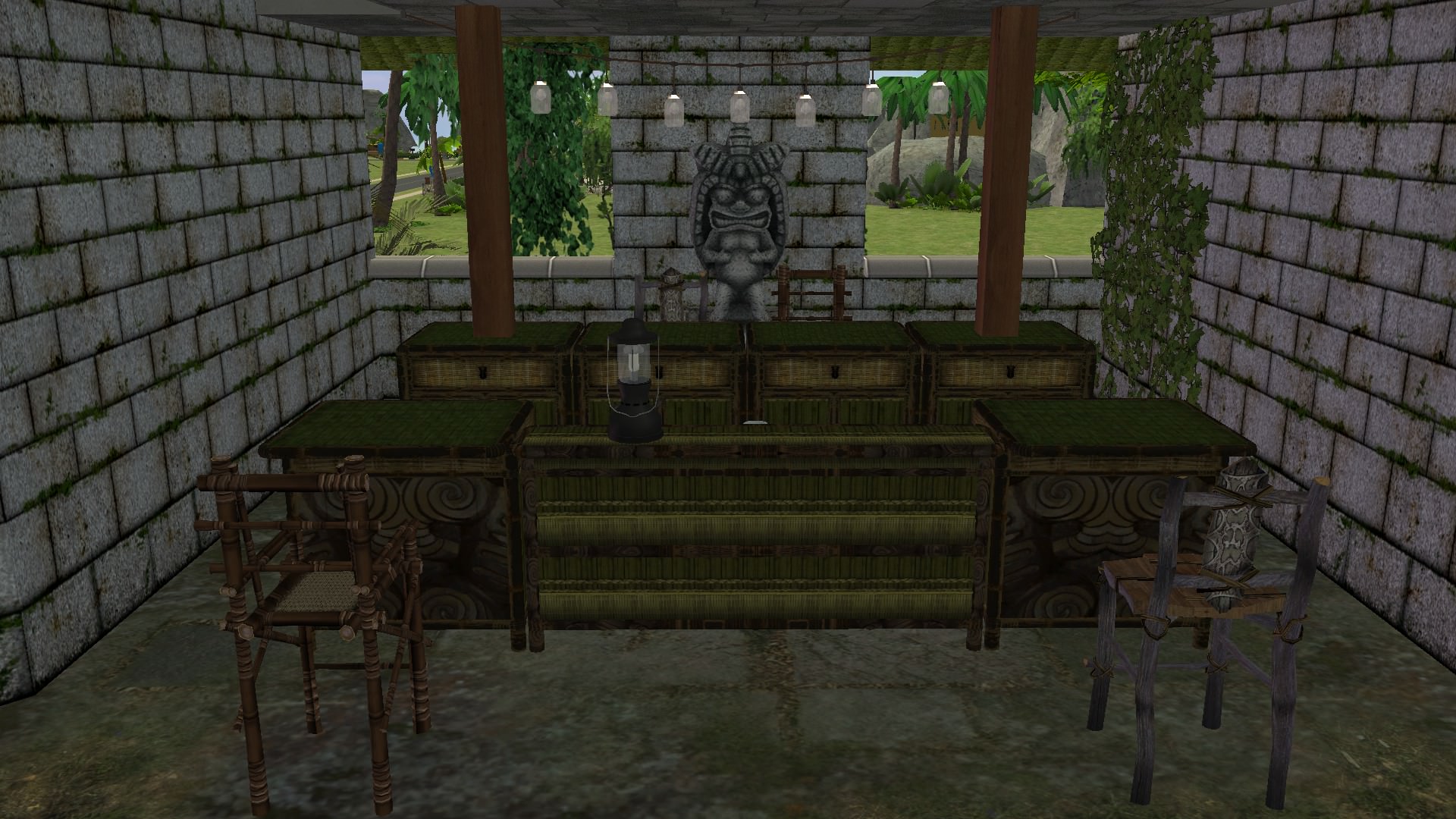 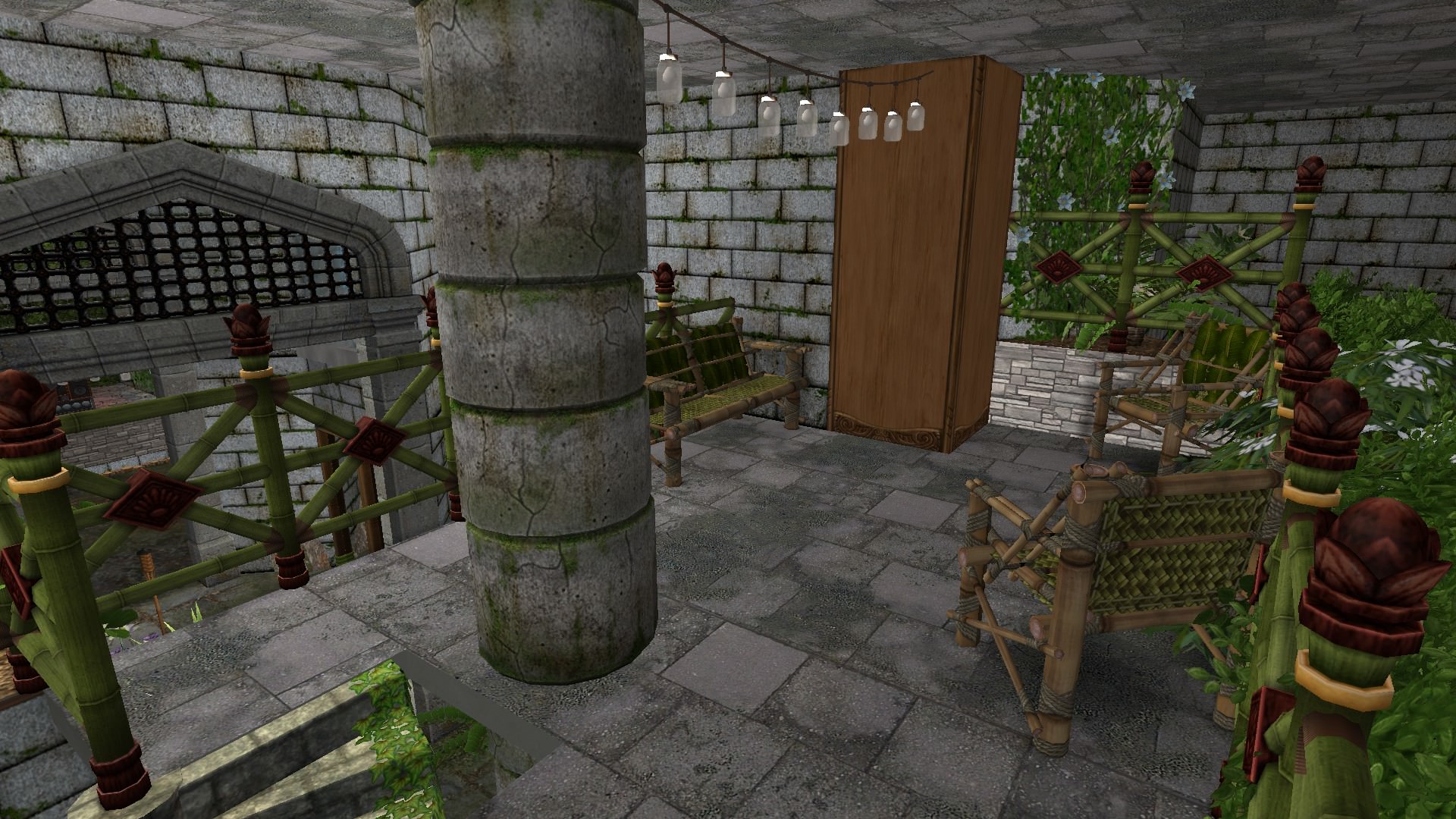 Below the temple, between the stone archway entrance and the stairs leading up to the main structure is a plaza of sorts, now the archaeologists couldn't find any clues as to what this area was used for but they highly suspect the shallows, created by the spring's waterfalls were where people waded across to fish in the deeper surrounding waters. Parts of a shelter were found at the center of this entry plaza and reconstructed to the best of the historians' knowledge of what it should have looked like. Wanderlust Inc. provided another drink stand so visitors could stay below in the sun and enjoy a few drinks or fish in the shallows.

Additional notes on the exterior: the Small turtle mosaic at the entrance was guessed by historians to represent Rhumm Kaaz's animal totem. The top structure is thought to have been a reservoir for another waterfall that can no longer be sustained to flow at that height - it has the same build as seen in the other Twikkian ruins however two more idols of Rhumm Kaaz stand at the base as if guarding it. Historians are still looking into the meaning of that. 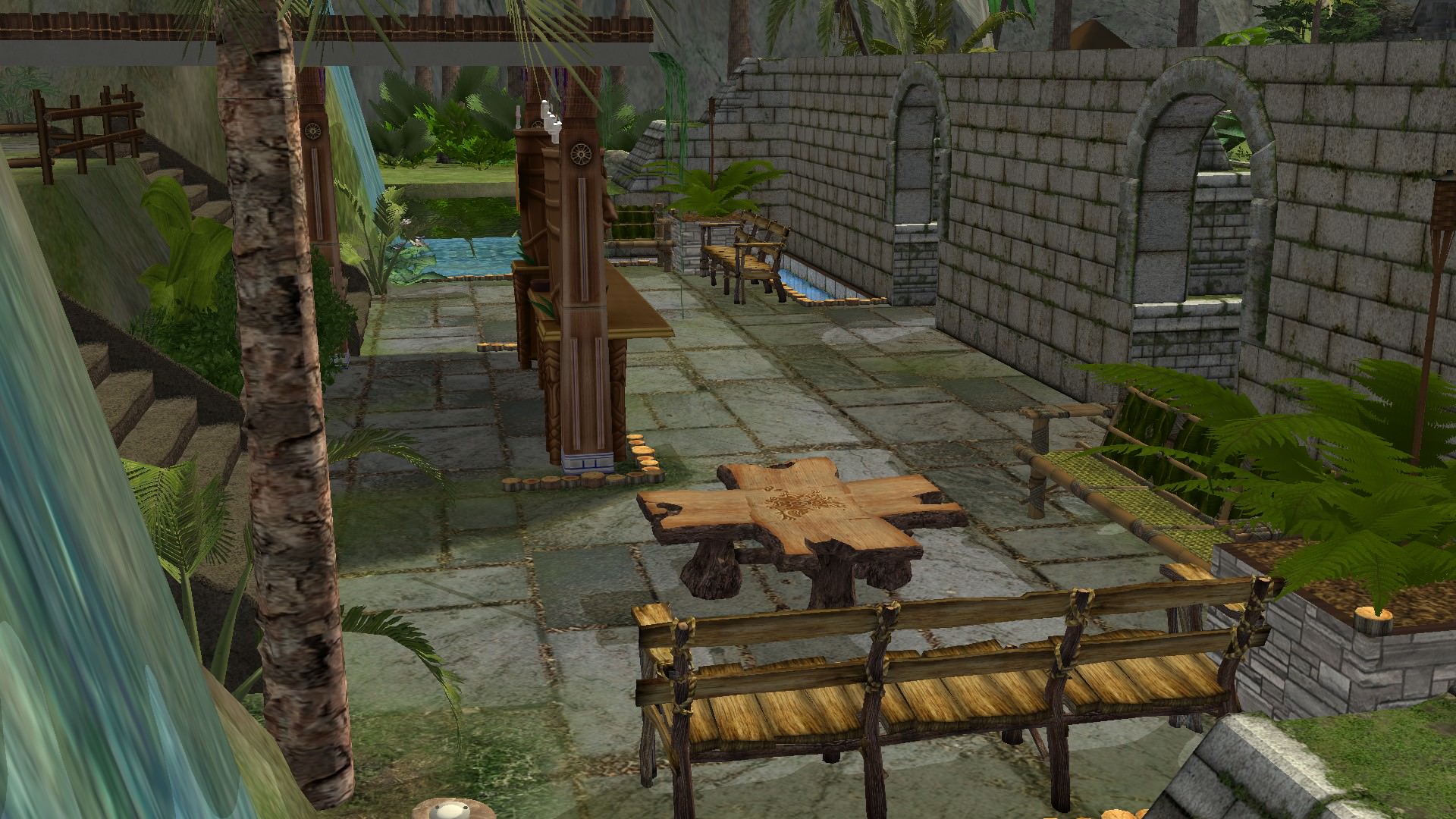 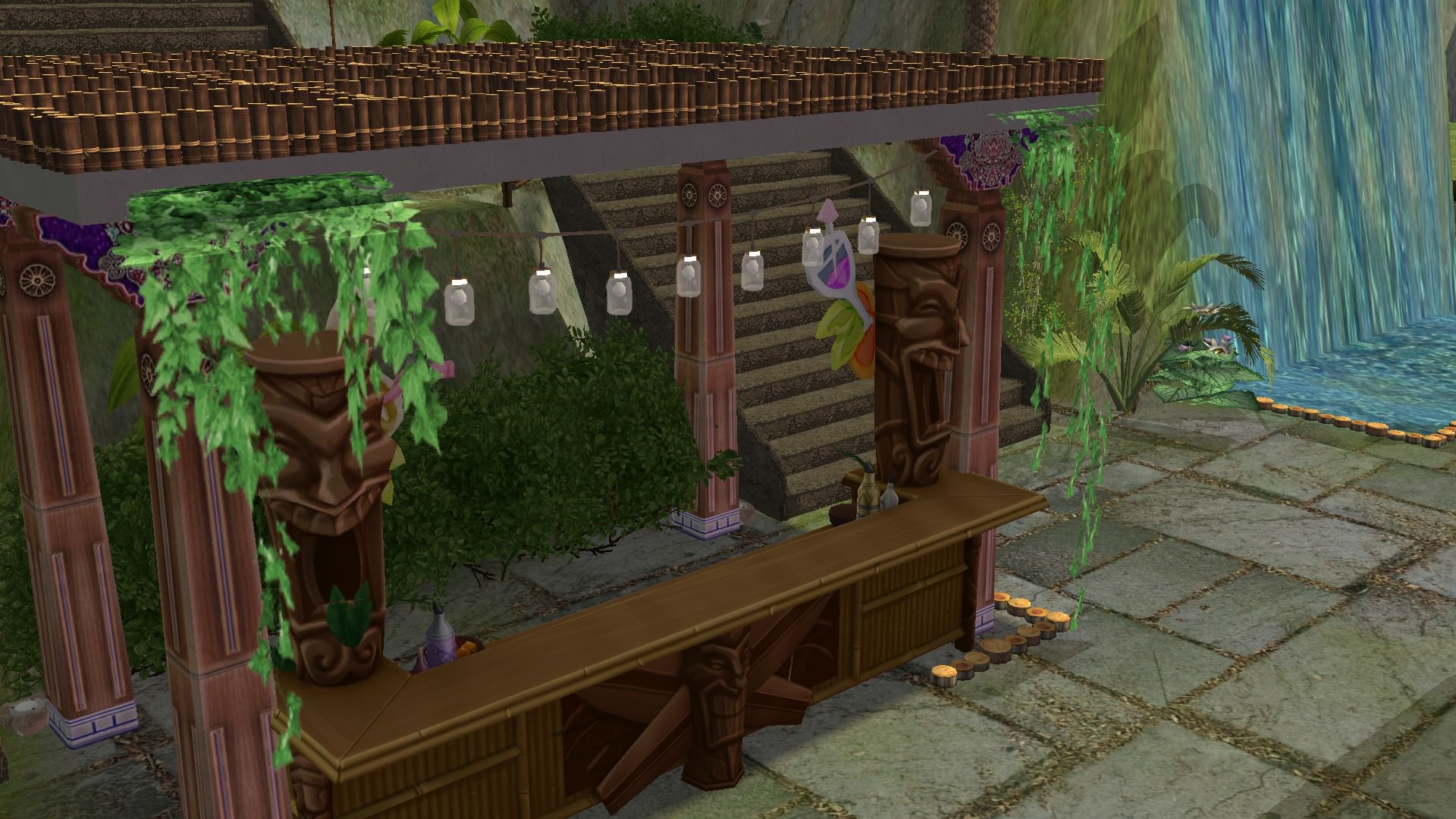 Visitors are urged to come in good weather as the rustic ruins are not immune to leaking during heavy rainstorms, however since much of the roof is in tact, there are places one can stay dry if needed. Lighting is sparse due to the rural location and unreliable power so most light is supplemented with standing torches or battery powered string lights or lanterns. Visitors must walk to the ruins as there is no road for vehicles to drive that far into the mountains. This is not a place for pampered party animals but those intrigued by local history, enamored with nature, and who adore a fun time!