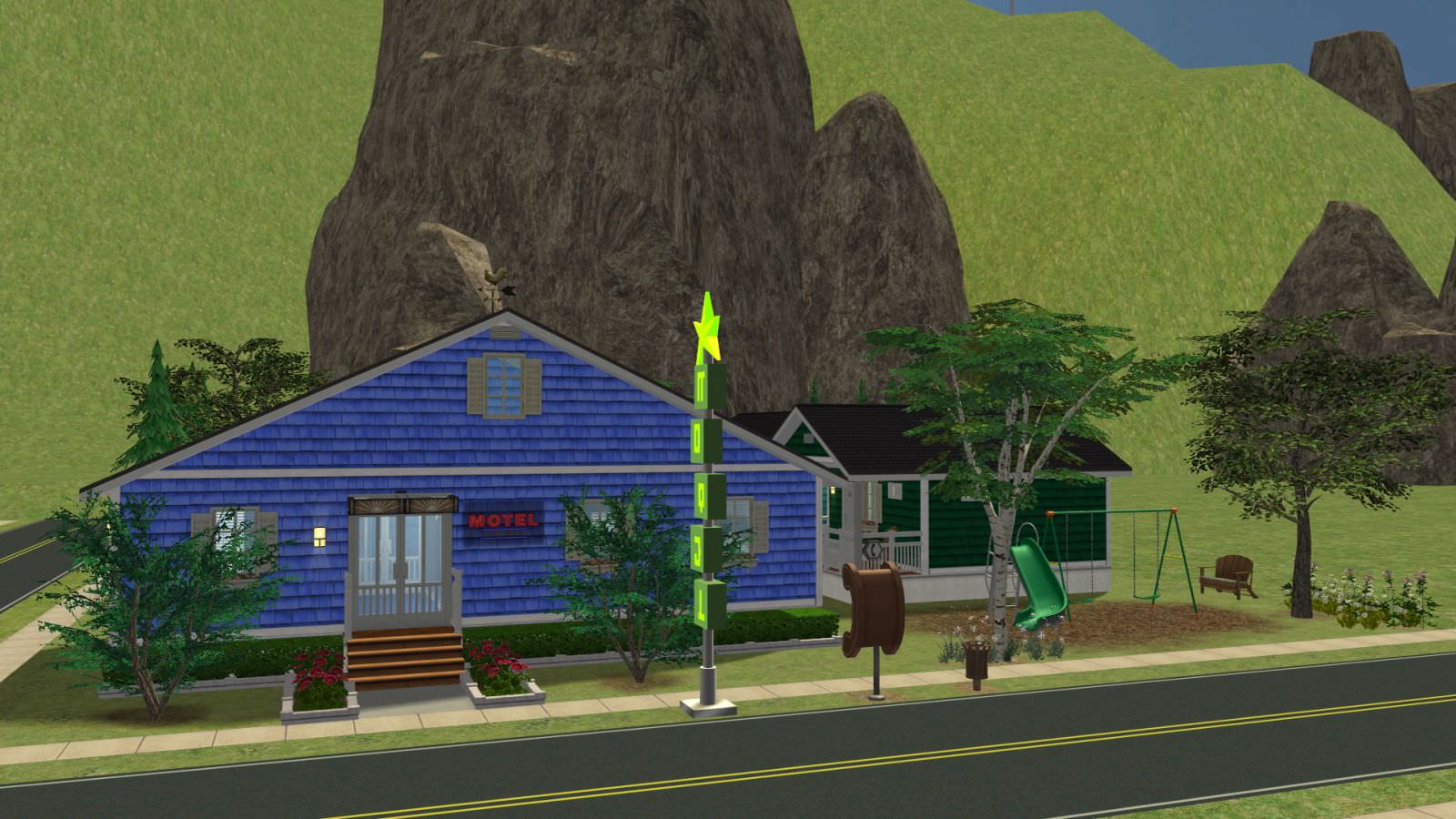 Frelala has evoked the charm of a West Coast vacation dwelling. I am going to try to evoke a little of the charm of the East Coast.

While I did not attempt to replicate the inspiration for these bungalows, I should mention what inspired the exteriors: the Maine Idyll Motor Court . A picture of some of the cottages are here; http://retroroadmap.com/spot/maine-...u-are-my-ideal/. They were built back in the 30s. I have been through Freeport, Maine a couple of times back when I lived in that part of the world. I used to think the old-time motels were kind of sweet, and we actually stayed in a family-owned small motel in upstate NY. I admit the interiors of mine are probably in much better shape, though. Though the old ones sometimes need a little renovation, they are often clean and sufficient for travel needs, and are sweet in their own way. They are also located in some of the prettiest areas of the country, and sometimes, it's nice to get away from the chain motels, off the main highway, and get a little more local flavor. I have sweet memories of those days.

Concerning the bungalows here: Bill's was also built around the 1930s. The units may be old, but the interiors have been spruced up somewhat and are clean. Bill has a preference for bright colors, rather than the more-sedate other exteriors of Three Lakes, so he painted the sidings vividly. The main lodge has a buffet and a coffee and tea bar. The buffet opens around 7 AM and closes at 10 PM.There is a pool and small playground. Visitors can see the local attractions, or just stay at the motel and sunbathe, chat with neighbors or birdwatch. Some of the guests have been coming for years, and THEIR family has been coming for years. It's that sort of cozy place. 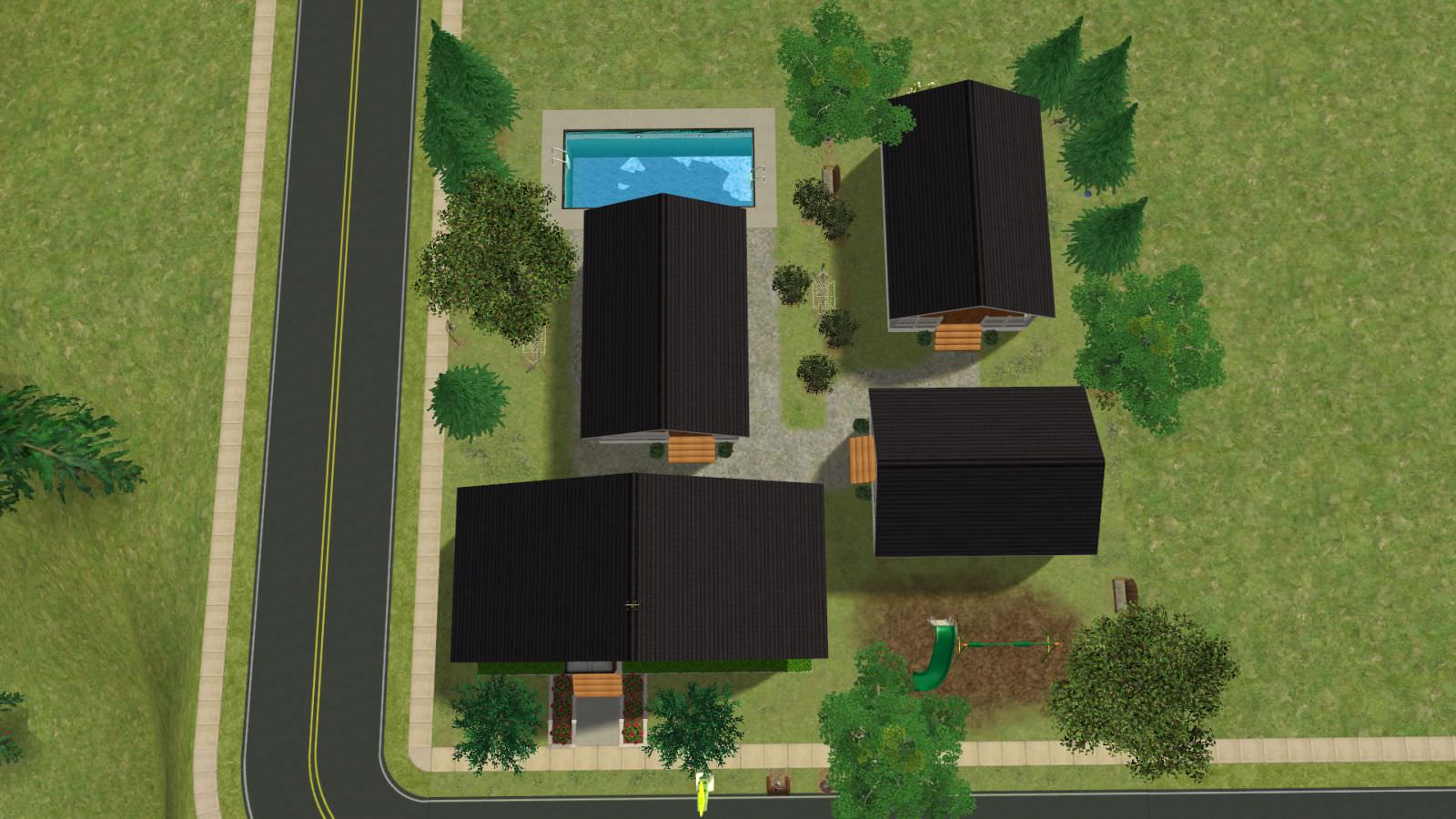 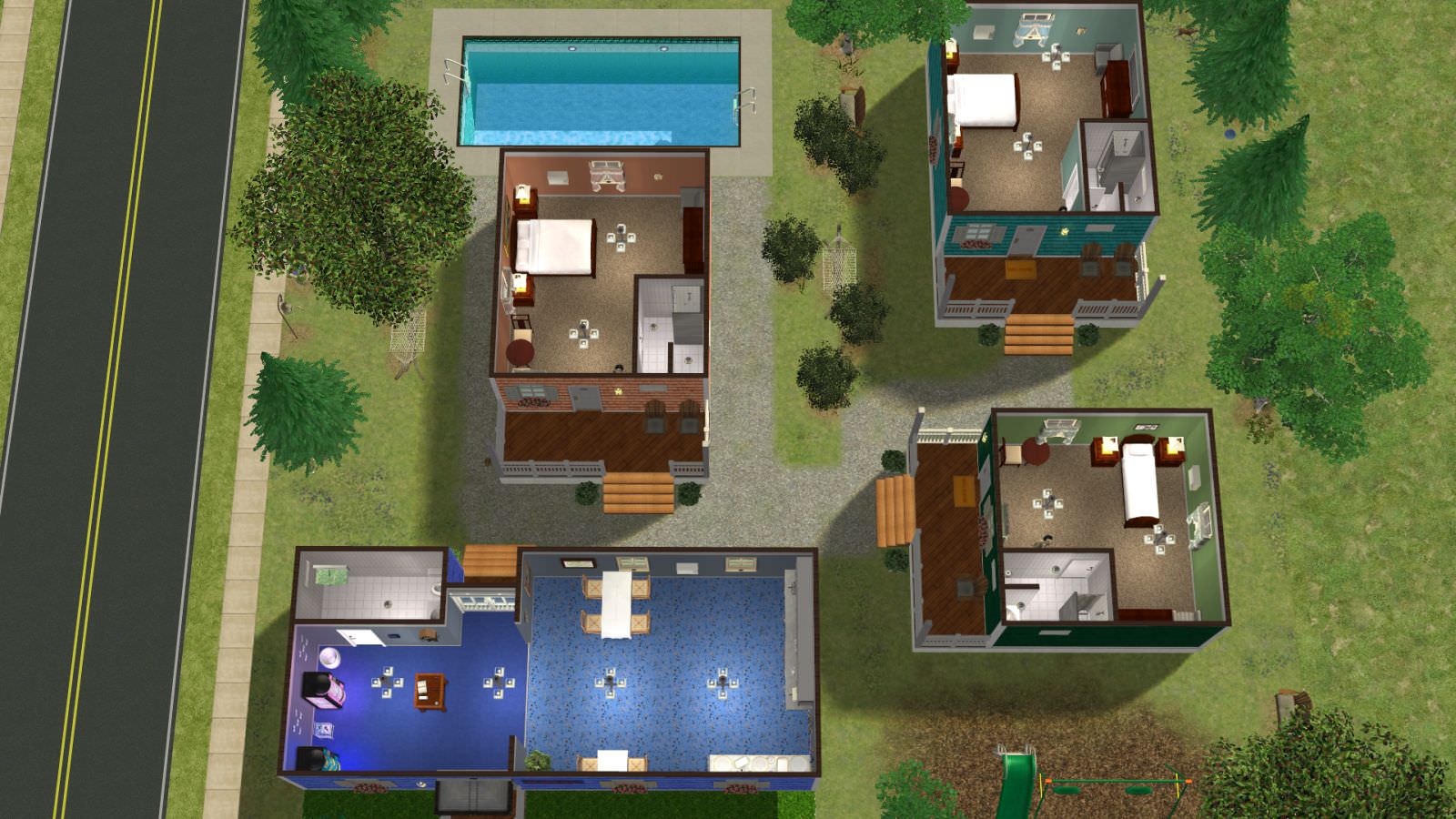 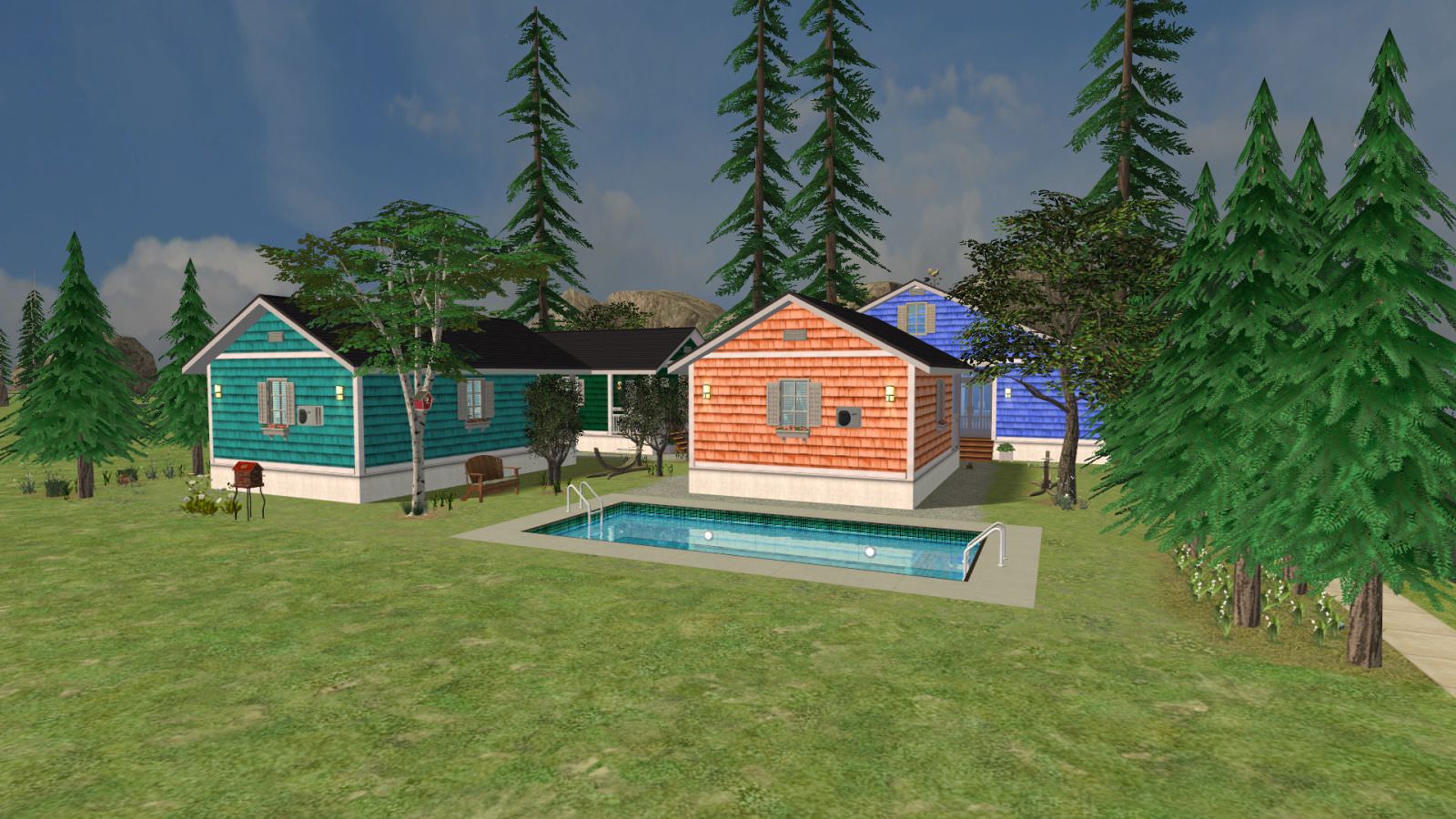 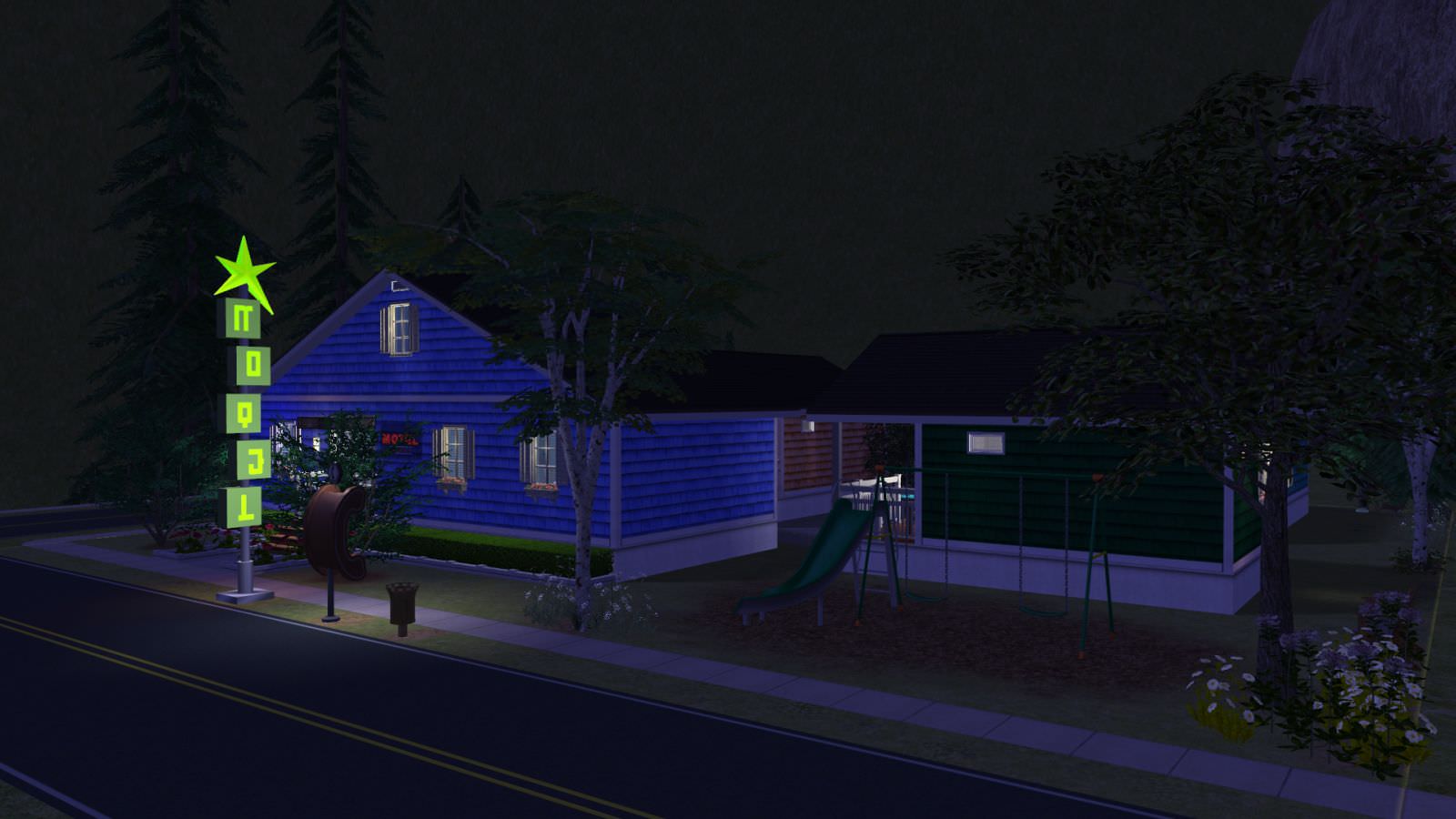 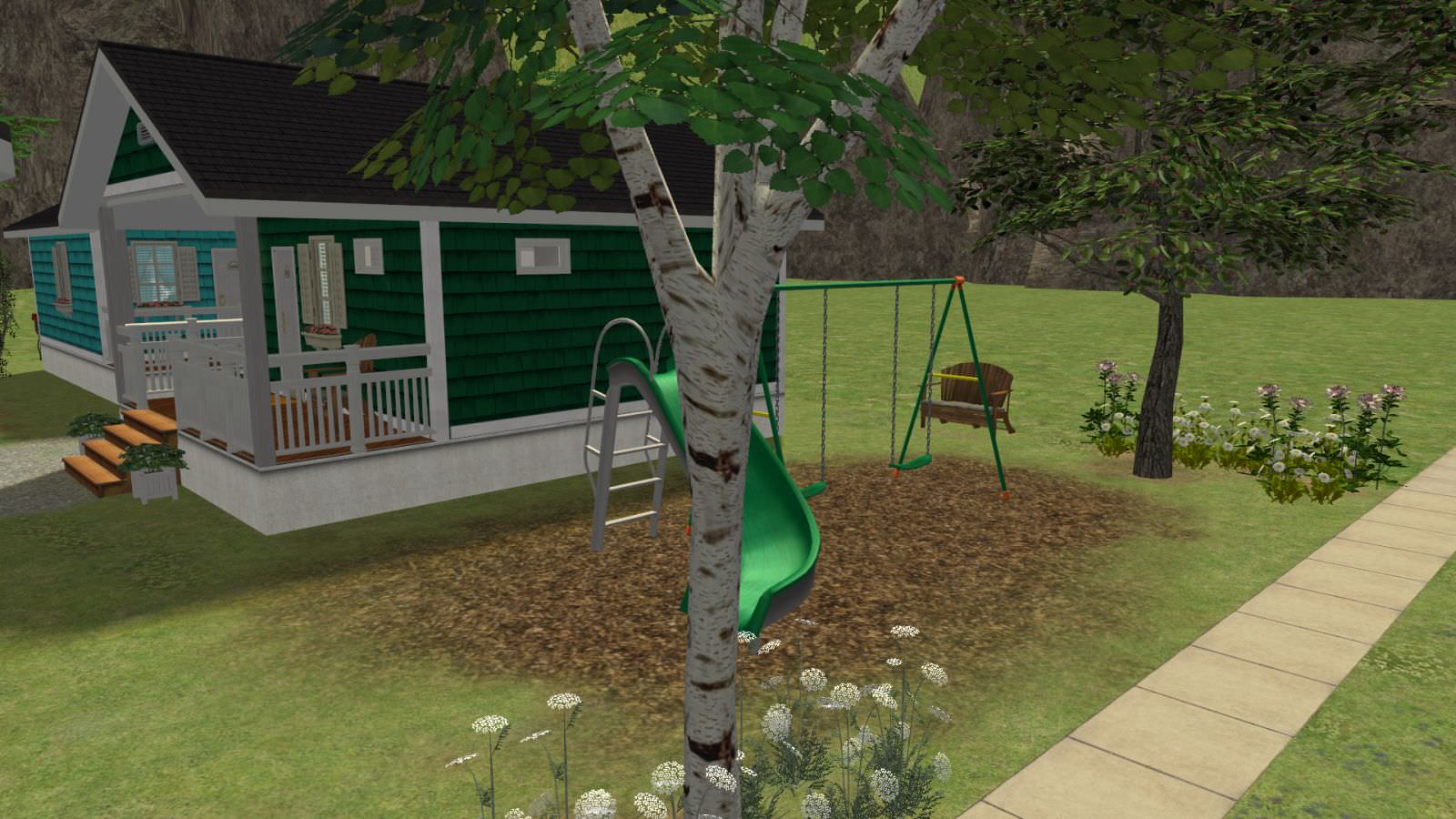 Two double-bed bungalows, one single-bed. OK ... technically they're cottages and not bungalows. But the guy's name is Bill, and I like The Beatles. Ergo, they're bungalows! 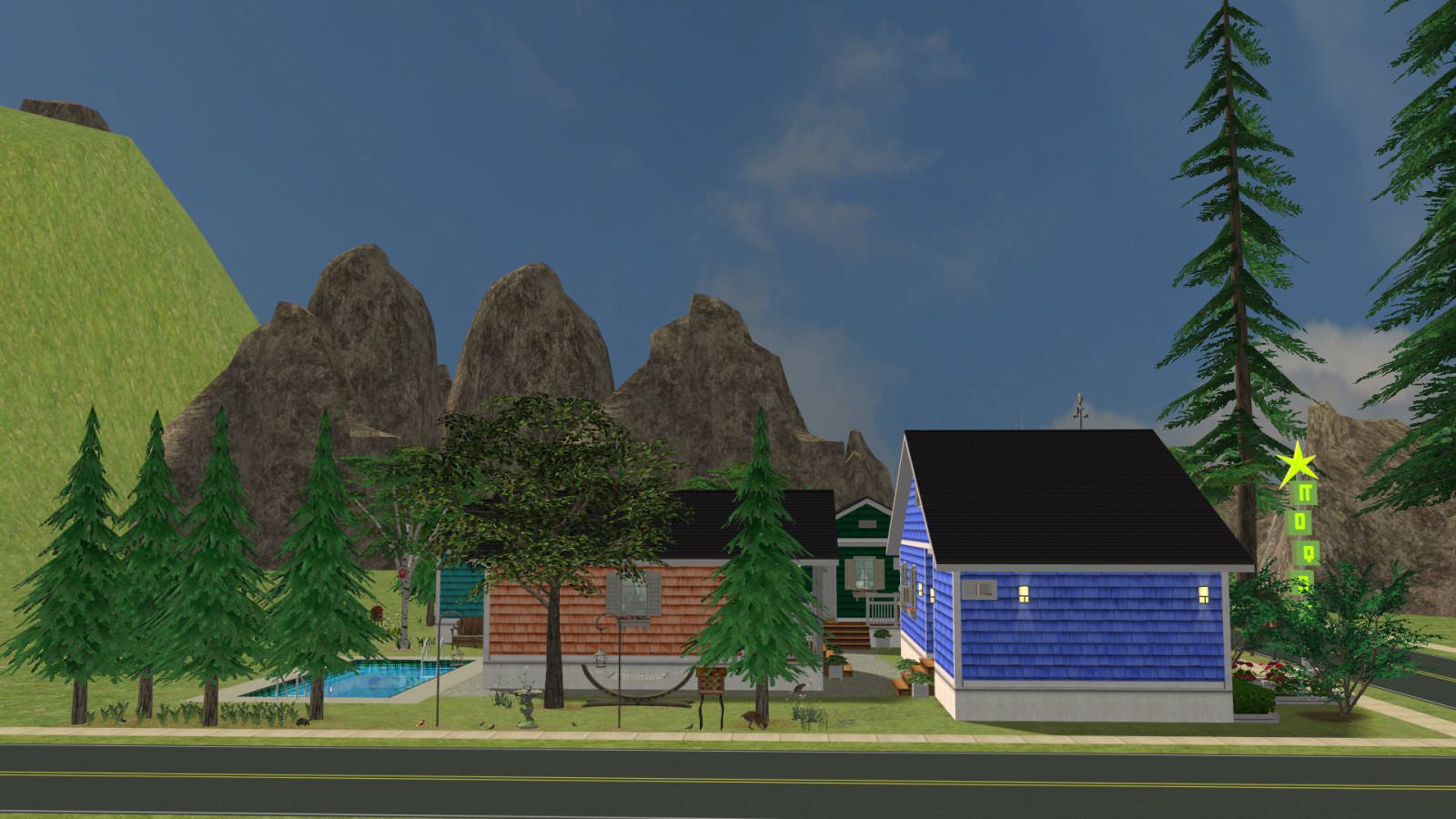 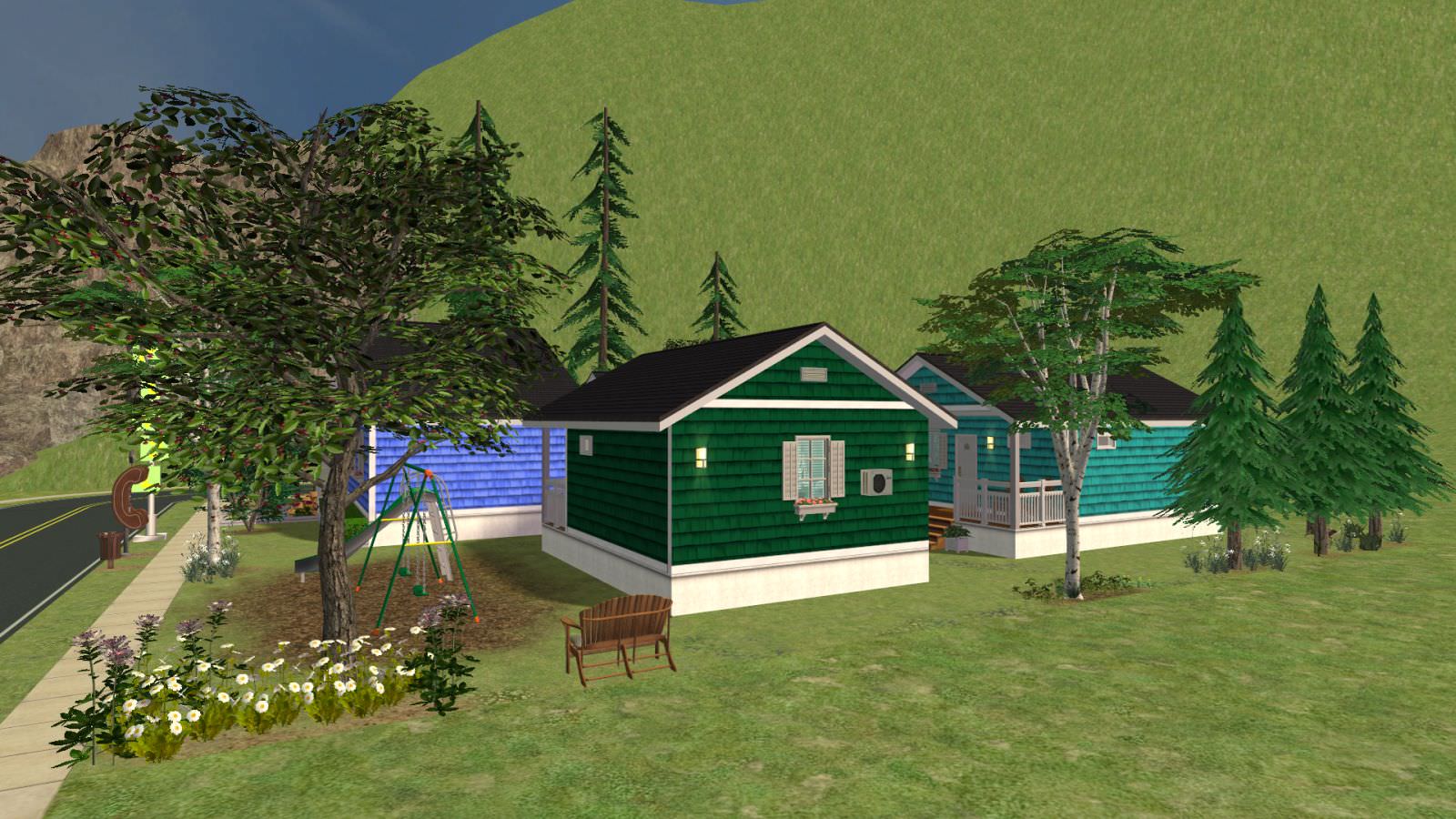 I typically do side-shots. Here are two. 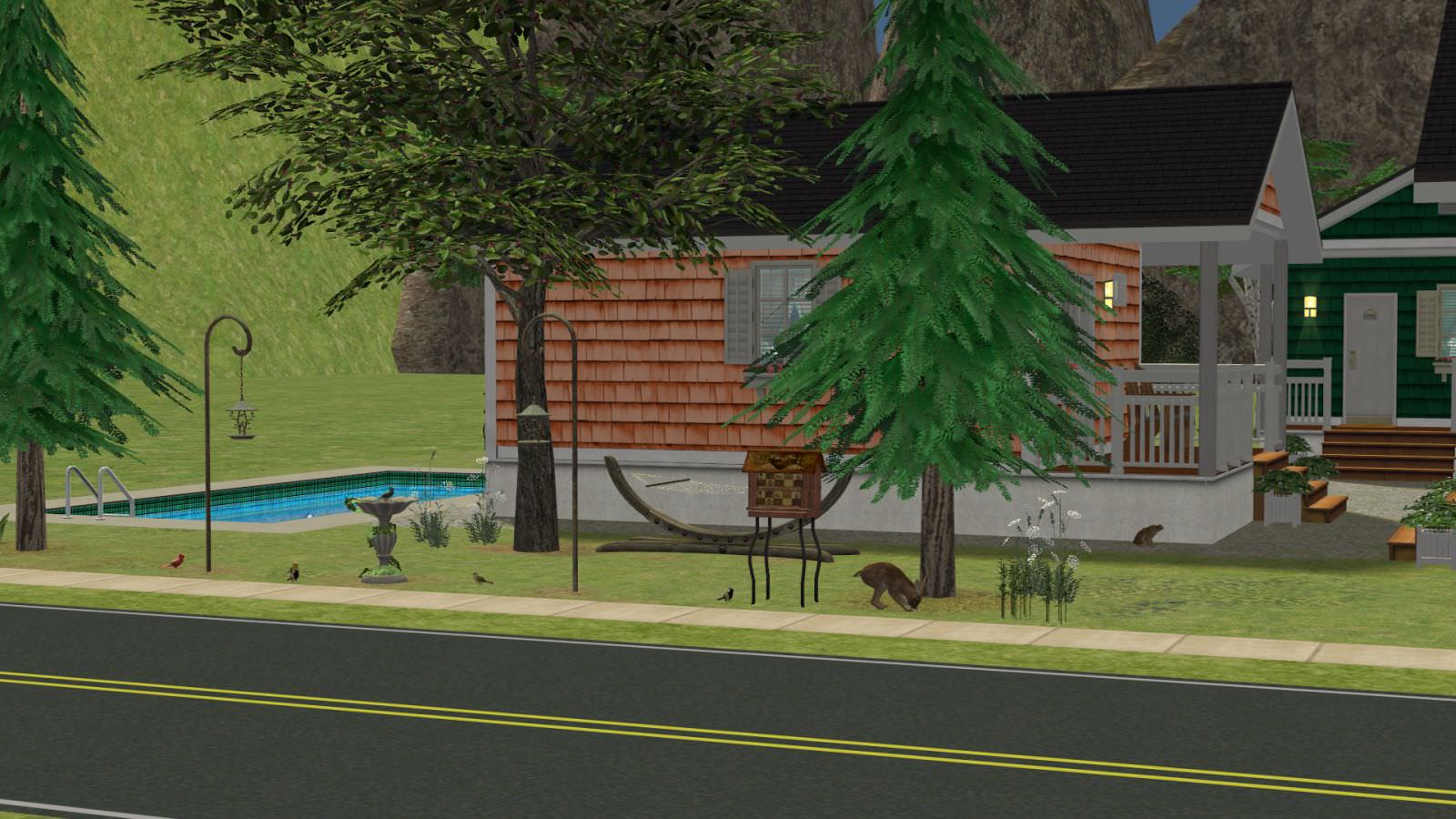 In the last version, I see I included only two birds. I wanted more birds. More! 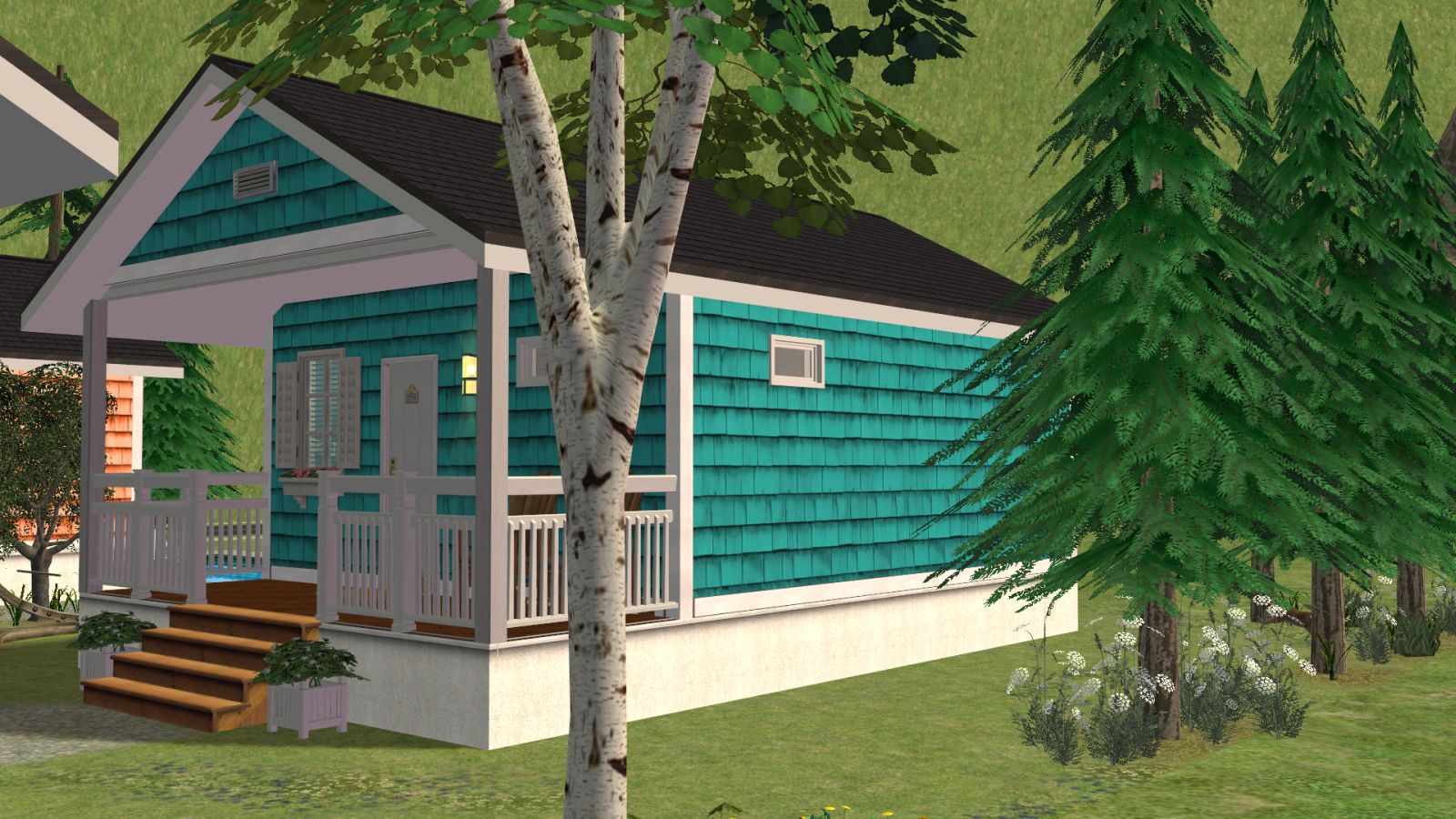 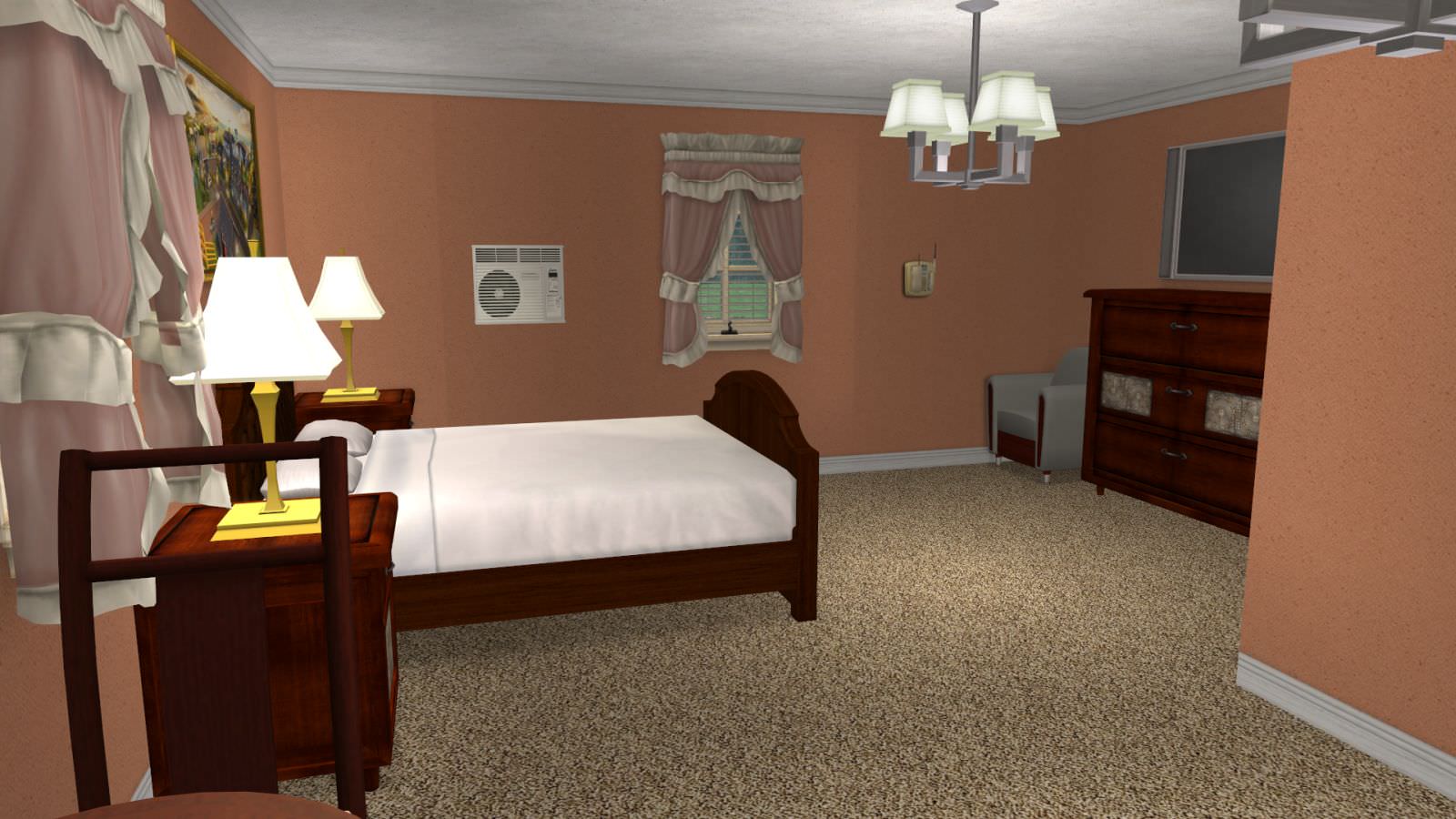 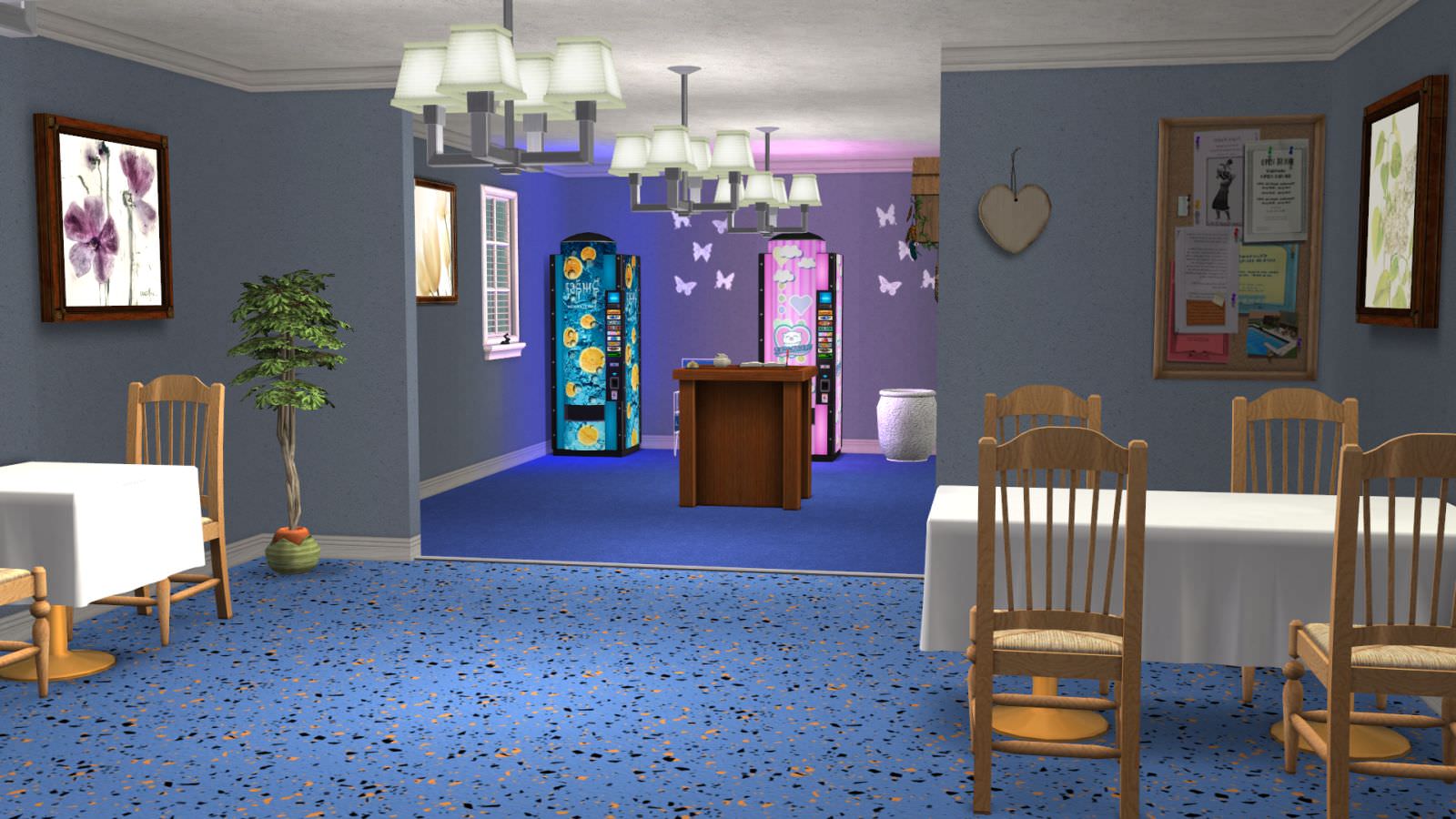 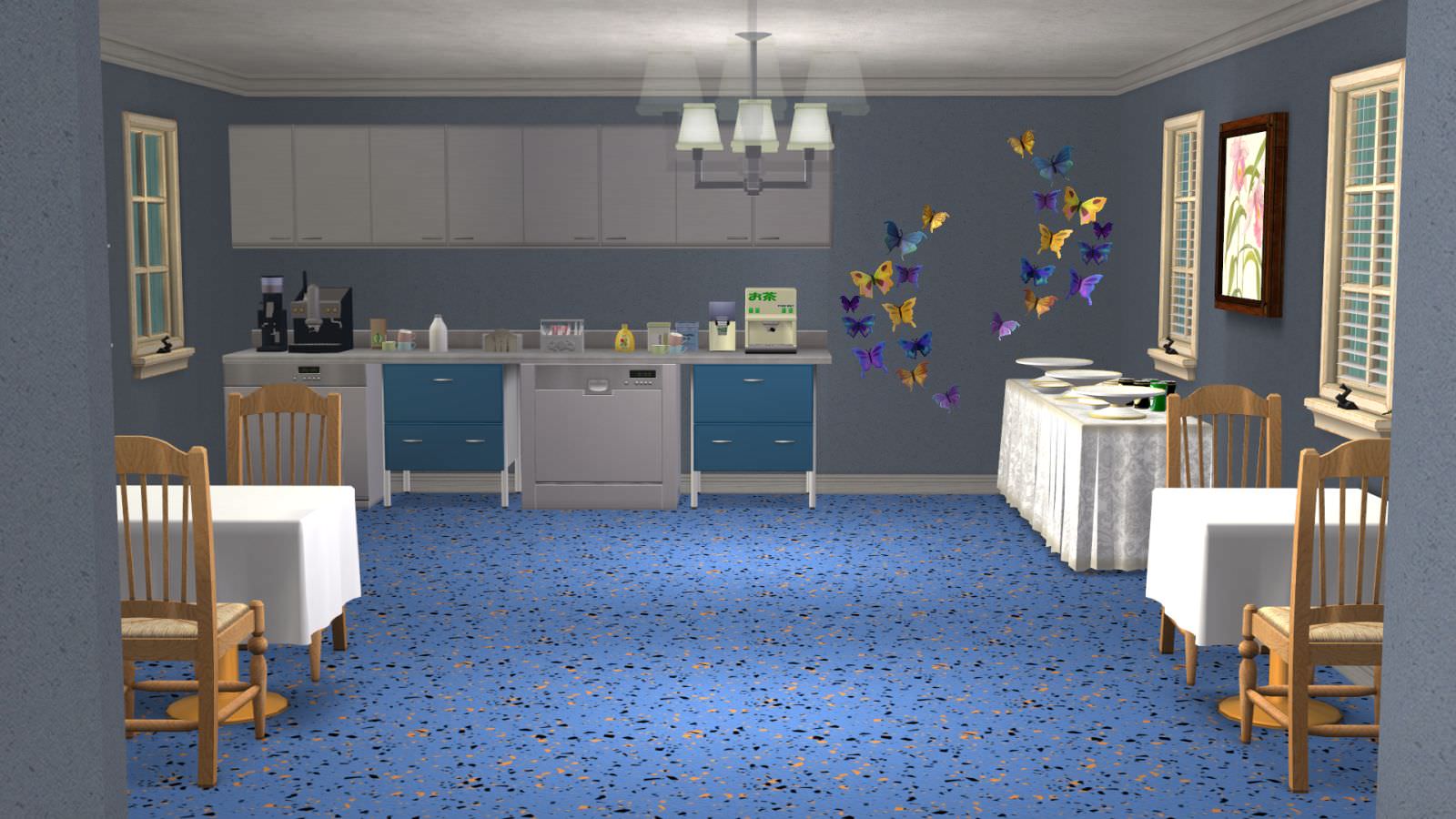 The grounds have flowers and plants found in the area, including daisies, lily-of-the-valley, Queen Anne's Lace, wild anemone, daffodils, cherry trees, dogwood trees, forsythia bushes and cleome. There are Maxis violets in the planters.

WIldlife are often on the grounds. Bill is also a bird enthusiast.

While I would have loved to do more landscaping, my lot was starting to crash, and I needed to be cautious after a certain point. Also, for Freezy to move freely, a lot must have as many two-tile or more access paths as possible.


This lot is as Freezy-proofed as humanly possible with this game. (Best guess ... 98%, give or take a point.) I tested all units; more than once. Freezy did not freeze at all on this lot as of the time I posted the pictures here ... and I tested for many Sim days, using all sorts of scenarios. No, it doesn't matter for the contest (so if any of you are having this issue, it isn't a problem here), and if I was a contestant, I'd get squat in points for that. But it's a sort of mental wrestling match between Freezy and me, and I fully intend to put this lot in my good hood and my main hood after the game, so yes, it's a huge sticking point with me. I even got rid of a garbage pail near the vending machines so Freezy might not lose part of the garbage disposal and play with the garbage! The housekeeper still likes stealing part of the garbage-disposal unit, but at least it stays out of the trash bin inside the lodge (I now have a decorative item in there.) The garbage-disposal glitch has never impeded Freezy's routing, and it's really easy to fix ... just have a Sim put something in the disposal unit or have a Sim tinker with it for two seconds, and like magic, it's back. I never had this happen before in any of the hotels I made, but making a playable hotel with no routing issues (Freezy or otherwise) can be challenging, and I learn new stuff all the time!

There are no routing problems with any other Sims as well. The bellhop/concierge and tourists behave just fine. They like to congregate in the main lodge bathroom sometimes, but as long as Freezy does his thing (I have the male one in this version), and gets the heck out of there, let them congregate. However, this is why the main-lodge bathroom is a little larger than normal. Make a smaller one, I found out, and if Sims congregate in there, Freezy will freeze. Just a tip for you building hotels for the first time.

For reasons I've yet to figure out, the concierge/bellhop desk worked best sideways. It did not work well the other way, even though there was more room. I'm not questioning it. It works. Again, great!
Thanks to ALL free-site creators, admins and mods.