I like GridElevator, or something else involving "Grid" -- I believe that's the most neutral/universal term.
Stuff for TS2 · TS3 · TS4 | Please do not PM me with technical questions – we have Create forums for that.

In the kingdom of the blind, do as the Romans do.
GeneralOperationsDirector

Would it be appropriate to roll this into LotAdjuster?
This Space Intentionally Left Blank
Mootilda

Quote:
Me too. But, is this a common enough term that people understand what it means? Being a mathematician, I sometimes have problems knowing whether I'm being too "techy".

I always liked GridEl, myself. Unfortunately, it gets a lot of google near-hits. How about FixGridEl or SetGridEl? Do other people use El as a short form for Elevate / Elevator / Elevated / ...?


Quote:
This utility has a complex UI... I'd hate to add something this complex to the LotAdjuster, which is already getting pretty complex itself. My thought was to create a couple of smaller more-focused utilities instead.

The main reason that I didn't make these into SimPE plugins was the amount of time that it would take to come up-to-speed on SimPE coding.
plasticbox
Pettifogging Legalist!
retired moderator

Quote:
I think a lot of people know the "snapobjectstogrid" cheat, so they would be familiar with the term.


Quote:
Not that I know of. Also, LotAdjuster and HoodReplace aren't abbreviated either – "GridElevator" or "GridAdjuster" would sound more like it belongs to the same "household", in my ears.
Stuff for TS2 · TS3 · TS4 | Please do not PM me with technical questions – we have Create forums for that.

Guess that I was thinking about the "El":
http://en.wikipedia.org/wiki/Chicago_L

Unfortunately, GridElevator and GridAjduster get a lot of google near-hits. Seems that the words "grid" and "elevator" or "adjuster" are used together a fair amount, unlike the words "lot" and "expander" or "adjuster". Besides, isn't an "elevator" a specific device for transporting people or objects? GridElevater doesn't get any hits, but it's difficult to type.

I suppose that SetGridElevations would work: not too long, no google hits, describes the functionality.

Hmmm... how about GridTweaker? Google only got one hit on that one.
aelflaed
Alchemist

"Tweaker" was the only word that I could find which is unique when used with the word "grid". Everything else was taken already.

How about TS2GridAdjuster? That's unique, descriptive, and distinguishes it from the TS3GridAdjuster. It also sticks with the current naming convention.

I've got to decide soon, since version 1 is nearing completion.

I've decided to stick with rotations of 90, 180, and 270 degrees for this first version, but am hoping to allow random rotations soon. I've got the formula for random rotations that I used for my hyperbolic paraboloid house, but it will take a while to get the formulas for slopes and curves into the correct format to use my generic rotation formula.

Do people have any feedback on how to specify slopes? Right now, I'm having people specify the two end elevations (and level multipliers, where appropriate). Would people perfer to specify the start elevation and the iteration values instead?

Horray! ConvertiWall was accepted. I've already found a typo ("chose instead of choose") and Numenor had a couple of additional suggestions that I'd like to look into. I suppose that I should get the first version of ... whatever we decide to call it ... out before I fix ConvertiWall...
tunaisafish

Why not bundle them all, and call them the (TS2)MooTools?
In my head I'm already calling them this

There's a good chance that anyone wanting one of your tools would also want the others too. GridAdjuster sounds good to me as a name for the new component.
Tuna's Tweaks @ The Sporum
Mootilda

OK, it's in the approval queue as the TS2GridAdjuster. Flat and sloped for now, curved in the works.

MooTools. Love it. Of course, someone just suggested that I should change my name to Mootoolda...
Mootilda

Variable parts of a curve
The GridAdjuster is using a sin wave for the curve. There are 3 variables which affect this curve: phase shift, amplitude, and period (aka cycle). I suspect that this is too mathematical for the average sim creator, so I'm looking for some guidance as to wording.

You can imagine picking up a picture in Windows Paint and moving the picture over to the right:

Remember that a sin wave is repeating, so when you move the curve over to the right, you will see the end of the preceding valley.

Amplitude affects the height of the curve. Increasing the amplitude will make the curve taller and deeper. Specifically, amplitude + .75 will increase the top of the "hill" by an elevation of .75 (4 clicks) and will also make the "valley" .75 (4 clicks) deeper.

You can imagine stretching a picture vertically in Windows Paint: 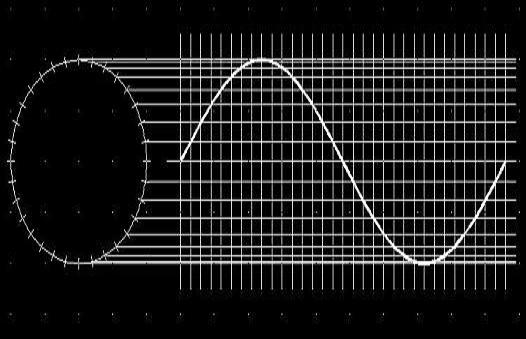 You can imagine stretching a picture horizontally in Windows Paint:

So, does it make sense to use the terms phase, amplitude, and period and create a tutorial which includes an explanation of the terms (with pictures)? Or, would it make more sense to use different terms, such as location, height, and length? Or perhaps move, stretch horizontally, and stretch vertically? Or, ... ?

I'd also like to know whether people would prefer a different scale for any of these variables. For example:

The standard period of a sin wave is normally 2 x pi, I have shortened it to 1 for ease of use. If you want a cycle (one hill and one valley) to cover 10 tiles, it's easier to type in 10 than to calculate 10 / (2 x pi). Or, perhaps it would be more consistent for me to set the standard period to 2, in keeping with the standard amplitude of 2? Or, perhaps it's silly to have the default period be 1 or 2, since both of these will create a flat grid, since a sin wave touches 0 at each of these points? I just couldn't figure out what the "right" default period should be.

Perhaps people would prefer to see the amplitude and period as percentages, rather than as floating point numbers? This would make it similar to the stretch / skew ability in Windows Paint.

In a future version, I might generate a picture within the GridAdjuster, so that people can tell what they're getting, but for now I was hoping to do something simple so that I can get it out quickly.

I'd appreciate any and all comments.
Mootilda

Well, I found a bug with multi-levels where the minimum level is -1, so I got a second chance to get the interface right. I've also got the curved pattern working, although I want to do a bit more testing.

Quote:
Mootools already exists, unfortunately: http://mootools.net/ -- it would have been nice =).
Stuff for TS2 · TS3 · TS4 | Please do not PM me with technical questions – we have Create forums for that.

Moo Tools
I am considering starting a new social group to discuss my tools. I've never set up a group before and want to make sure that this makes sense.

GridAdjuster V1.1 testing
CompatiLot - Downgrade the EP requirements for a lot.
LotMerger - Takes two lots and combines them into one.
LevelAdder - Adds a new level to an existing lot. Add a basement. Raise your roof and add another floor to your house.
LotRotater - Rotate a lot, so that the sun is in a different place on the lot.

Would anyone be interested in joining such a group?

"Would anyone be interested in joining such a group?" Yes.
This Space Intentionally Left Blank
Mootilda

OK, I'm stumped. I've created the group but I can't seem to figure out how to send you an invitation.
plasticbox
Pettifogging Legalist!
retired moderator

Group invitations are on people's profiles, Mootilda! Go to anyone's profile and you should see the line "Invite this member to one of your groups" under Group Memberships.
Stuff for TS2 · TS3 · TS4 | Please do not PM me with technical questions – we have Create forums for that.

Is there any way that I can sticky a thread within a group?
plasticbox
Pettifogging Legalist!
retired moderator

Not at the moment, no. The way it's now a sticky would be sticky for the entire Social Groups forum. This is supposed to change at some point I think, but that depends on Delphy's time .. I'd suggest using icons for "important" threads the moment, like the green arrow one, that works quite well in my eyes.
Stuff for TS2 · TS3 · TS4 | Please do not PM me with technical questions – we have Create forums for that.

In the kingdom of the blind, do as the Romans do.
GeneralOperationsDirector

I've updated the wiki with some of the new info from my work on the LevelAdder:

Inge (Simlogical) has buyable beach portals, so you could fake it. I don't think the lot type can be changed between beach and non-beach.
Mootilda

aelflaed is correct. At this time, we don't understand beach lots well enough to convert a regular lot into a beach lot.
GeneralOperationsDirector

We'd also need to determine which objects are duplicates, so that one or the other of the duplicate objects could be eliminated and its associated records changed to the ID of the other object.

It might be do-able, but Pescado seems to believe that the duplicate object problem is a pretty major piece of work. Even when the beach lot is completely empty, there are a lot of hidden objects, which are the ones most likely to have problems with having duplicates.
Back to top