Oh, she's about to make a 360° spin with her head, then spew out some green slimy thing I guess... Watch for her tongue, and you'll know if you have to call an exorcist or just give her some stomach painkiller... ^^
Advertisement
Lady_Chaos

Mingham, you're avatar on that makes it complete

Ok, so update on Mr. Call me, I'm your burglar-man

... A few days after getting his ass kicked for trying to rob my brave sim-lady. He rang and asked her to go on a date. She refused, obviously and he now keeps trying to rob her every second night, this has happened 4 times and coutning... I think it's time to move neighbourhoods.
kawaiipd
Field Researcher
#1604

I wouldn't get run out of town by him. Just kill him and move on.
leo06girl
Inventor

Have you ever wondered what dogs fear above all else? Well, I can answer that. It's clowns! This dog even has nightmares about clowns. I think he may have watched IT when he was a puppy and it traumatized him.

The moment is perfectly staged. Teenage Severin is playing his guitar while his father watches. Sev's made some bad choices, but as his father watches him, he realizes the potential his son has. Things can turn right after all. Severin can pull on your emotions with that guitar. Perhaps his future really is as bright as he'd originally hoped. Closing his eyes, Severin focuses deeply on his talent, making his father proud. It seems like all the wrong things have just faded into the--

HOLY F***, AMARANTH. WHAT IN HEAVEN'S NAME. WHERE DID YOU COME FROM. THAT'S YOUR SON YOU'RE EXPOSING YOURSELF TO. HAVE YOU FINALLY GONE SENILE.

Perfectly staged moment shattered. Sometimes I'd like to throw my Sims through a window.
The Overlord Legacy - Taking over the world one generation at a time.
The Addison House - The reality show where eight contestants are crammed in one haunted house to survive.
leo06girl
Inventor

Last time my Sim decided the horse barn was the best place to give birth. This time I learned from her that the second best place to give birth is outside, next to your doghouse, while your son watches on in horror. It is also advisable for everyone else just to ignore the fact that you are giving birth. This Sim has taught me that is is BAD for the Father of the baby (or anyone old enough to drive you to the hospital) to acknowledge that you're giving birth and drive you to the hospital.
Ive

FYI, uploaded Axane to the exchange yesterday for anyone else who wants her in-game: http://www.thesims3.com/assetDetail...assetId=6687098

Her eyes should appear all-black in your game, so if they don't, please let me know. Also, I failed to notice that she was wearing some Store CC clothing when I uploaded her, so I hope that won't cause any problems. Again, let me know and I will replace her with a non-CC version. Enjoy!


That is why I always have my Sim take herself to the hospital. Yeah, it probably sucks to ride a bike while you're in labor, but at least you're not relying on someone else to get you there in a timely manner.
My TS3 Sims, patterns & recolors

And now, a few extra pictures before I move on to other Scumthorpe-related things:

Soon after Crypto Scumthorpe was born, news of Rick's surprise rectal pregnancy quickly reached the rest of the family and naturally became the big conversation topic of the moment. In the process, I reached two significant conclusions about this game:

A: Who says TS3 sims can't be expressive?

B: When you have a buttbaby, you seriously need to make sure you adequately explain what just occurred to any young children living with you at the time.

Because otherwise, this happens:

"I know where BABIES come from!"

"Bull. Shit. How could you possibly know where babies really come from? We're 6! They don't even teach us that for another four years!"

"No, seriously, I was downstairs and I saw Rick screaming about his butt and looking like he was going to do butt things, but instead of doing butt things his butt had a baby! And it was green! And then dad started yelling at him for having a baby even though he wants grandkids, and then they called the butt doctor-"

WHAT IN THE EVERLOVING FUCK LOLITA

HAVE YOU BEEN BROWSING THE WEIRD BIT OF DEVIANTART AGAIN

And so two little girls came to believe that pregnancy is completely unpredictable and revolves entirely around men's buttocks.

And that green newborns are perfectly normal.

This... isn't going to help them develop healthy relationships later in life, is it?
gyrobot
Field Researcher
#1613

On the note about your female heirs being pretty. They have to, so any unfortunate male to be invited to their quarters will think the mansion in Starless is the Playboy mansion compared to them
eskie227

I don't think they were destined for healthy, mature relationships before the blessed event. However, this won't help.
kewpie

Two sims in the rain holding umbrellas and having a water balloon fight.
BL00DIEDHELL

So, I tried something new last night. I decided to give the asylum challenge a go. I've never done a challenge before, not in any Sims game but the asylum one is right up my alley, so I painstakingly made seven Sims and really lazily made one, crafted an asylum for them to go in with CC downloaded specifically for it (I don't really understand the no CC rule; I'd struggle making the asylum look as dingy and awful as it was supposed to be without a little help from talented creators, so I kind of stuck two fingers up to that rule. Other than that though, I'm being a good girl!), shoved 'em in and let 'em go. Since I've got Supernatural, I thought I'd make everyone in there with an occult status. So I have two werewolves, two vampires, two witches, a fairy, and a ghost.

Started off quite boringly. Everyone except for my single controllable Sim were just standing around like lemons for a while, or went and investigated a new object, very little was going on. Then two of the ladies decided to catch a fly in their hands and dine on its tiny splattered body.

The vampire at least had the decency to look embarrassed as she smeared the fly's remains across the fabric of her skirt.

My fairy's ability to psychically detect food left cooking on the stove actually alerted me to the fact it had been left abandoned in the first place, but since I can't direct any of the others, I couldn't do anything about it, and just hoped the fairy could finish the meal before it burnt everything down.

Why? Because my male (and given how effeminate he is, I use that term loosely) werewolf decided he was going to have a bad mood wolf out and then piss himself, right in the kitchen doorway. Two others were crowding around outside waiting for him to shift his stupid ass...then wet themselves too.

This, by the way, is pee. People pee.

Motherfucking Goddan son of a bitch! The sun hasn't even risen for the second day yet, and already there's another fire!

Thankfully this is Namira (why yes, I do like Skyrim), who is my controllable Sim, so off to the shower with her. I'm so glad I decided against a bath.

This, however, is obviously not. Unless EA coded in intelligent enough AI to make Sims extinguish himself, he was dead.

So now everyone's got a powerful negative moodlet as they mourn the inmate they barely knew, and that is how I lost one of my Sims in the very start of the second day of my first ever Sims challenge!

Scrumthorpe is totally becoming part of the internet lexicon as a term for an evil Sim isn't it?
ChronoJohn
Top Secret Researcher
#1618

Currently wondering if QUALITY PARENTING is going to start catching on at some point too, given how often I've used it and how prevalent awful sim parenting is in general. Although I didn't actually come up with that one, that's a reference to an old TS2 Let's Play I read last year where a bunch of idiotic sim men wound up with alien twins and failed spectacularly at looking after them.

Here's the original QUALITY PARENTING image, which I had nothing to do with: 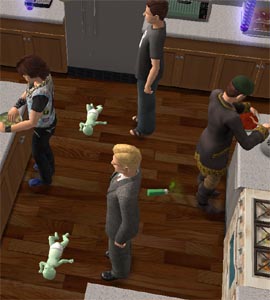 "Floorbabies" seems to be catching on as quite a popular term too. I've seen it used in the Sims 3 LP I've been reading on Something Awful.

(Btw, I was wondering earlier, whatever happened to Judas after giving Larry a 'nice' visit from his first wife...? He seemed to just disappear.

All I did was tell my Sims to mount their horses. The guy's wife did it perfectly. I just hope the guy's inexperience at horse riding didn't show through too much.

...I...guess for some people there's nothin' quite like a face full of horse butt...?
Fuck this shit, I'm out.

Don't worry, I'll get back to Judas soon enough- since the last post, he's been lounging around Stately Scum Manor living off Larry's fortune on account of everyone else being too afraid of him to raise any kind of objection to him being there. And zombie Honoria can still be found wandering around town and being a nuisance from time to time.

Apologies if some characters fall in and out of focus- it's an inevitable hazard of playing a large family, I guess. The Scumthorpes are spread out across four households, three branches of the family tree, and mostly hate each other, so they're unlikely to all appear at once in anything without someone winding up dead. Same applies to characters like Spurgin Scumthorpe the neckbeardy internet troll and Sid Scumthorpe- they're background characters at the moment.

(Although Sid will definitely get some time in the limelight when '70s/'80s/'90s Stuff comes out, if only so I can have him strutting around town wearing a literal leisure suit and pathetically trying to flirt with any woman who doesn't immediately cross the street and roll her eyes upon seeing him. It basically writes itself)
hugbug993
Top Secret Researcher
#1623

A few days ago, I mentioned that one of my sims could apparently see across the town and through objects after she hopped in a taxi to look at a bird in a bush.

Now, she just walked through a wall. And I swear that she looked right at me as she did it.

I think I've figured out where our future AI overlords will come from.

On a related note to the QUALITY PARENTING thing, I forgot to buy a new crib after one of my sims gave birth. The sim holding the baby decides that listening to a guitar is more important than holding the baby. So that sim walks outside and carefully puts the baby down. IN THE SNOW.
vhanster

That is exactly what happened the last time I got babies in my game, actually. It should only be one, but the adoption service obviously did not notice a smelly, crying baby lying on the front porch, before dropping off a second one I did not want.
BL00DIEDHELL

Ahh awesome! And not to worry, I was just curious is all. :3