Oh, I forgot that a new town was already established. I wonder how Riviera will fit in the timeline, though-
Advertisement
RomerJon17

This was revealed a few pages back already lol. This forum is on top of everything.
Visit My Tumblr for all my Recolors!
Tumblr
marka93

Well even though EA threw us a bone with the Goth pic I am back on the fence until we get to see game play because it is still all about the game play for me. (It is also about hardcopy disk to.)

It looks like they're going to keep throwing us bones until E3. Which I love -- I can't wait for the trailer on Wednesday.

But I agree, they really need to up their game and answer the basic gameplay questions come E3.
YouTube | Tumblr(s) | Twitter
plumbobot

Question. Do we know whether the base game will come with more than one neighbourhood/world/whatever?
Enjoji

As far as *I* know personally, there hasn't been any info leakage about the neighbourhoods... I could be wrong, and not as 'rabidly foaming-at-the-mouth' up-to-date on news as I try to be... The only hint we've had about neighbourhoods is the concept art hidden in Into The Future, and the shots from the neighbourhood during Gamescom. Those pics look like two different places, but I'm going out on a limb saying that.

Quote:
Stages aren't all equal. Look at this post from Graham:

Quote:
Now, I know from my own experience of following game news that most games will spend a long time in pre-production, and common sense would tell us that getting to be feature complete is the biggest hurdle for a game--everything past there is just tweaking and tuning, for the most part. You're misunderstanding the steps themselves, too: the last one is clearly just "shipped," as the one before it is release to manufacturing, AKA "going gold," when a game's coding is done and it begins to be put on discs. (And anymore, most games of this size get day one patches so that the developers can continue working on the game after it's gone gold.) So we know that as of GDC they were in alpha, feature complete, and we know that the game is going to be released by the end of September. So that gives them six months to tune the game's already-in-place systems and bug test. That seems like plenty of time to me.
I promise I'm not as grumpy as my avatar looks.
ZenGarden

Where did you get that pic? :o
Splatedpumpkin

that's a slight exaggeration! people are happy to see the Goths because it confirms they will be in the game, and it's nice to see that a fan favourite family who has been in the series from the start will be reappearing. Combine that with the fact that Mortimer and Bella look really, really good, and we know we're getting a trailer - that's definitely cause to renew interest in the game

I doubt anyone's pre-ordered just from seeing the Goth photo or anything
Bustin' Out!
EmotedLlama

Quote:
Bah. I knew I was forgetting something about the alpha and beta stages: To my knowledge, alphas are when the game is feature complete, and it moves on to beta when it's content complete, meaning it's not just tuning and bug testing left.
I promise I'm not as grumpy as my avatar looks.
Ather

The first landscape picture, I don't even know what that is. But it really doesn't look like TS4. There's not even any marker on the picture to indicate it's for TS4. And the "world artworks" font looks like it was added in.

The only thing that looks similar is the architecture in the landscape picture and the one showing off the GUI.
nesiocesse78

I think it was an artwork of a producer there, was it? They leaked several pictures from him, including a few other neighbourhood shots if I remember correctly.
nikel23

Looking back at the alpha pic several pages ago, I realized something. Am I the only one who's annoyed that the plumbbob is solid, and doesn't reflect or shine? 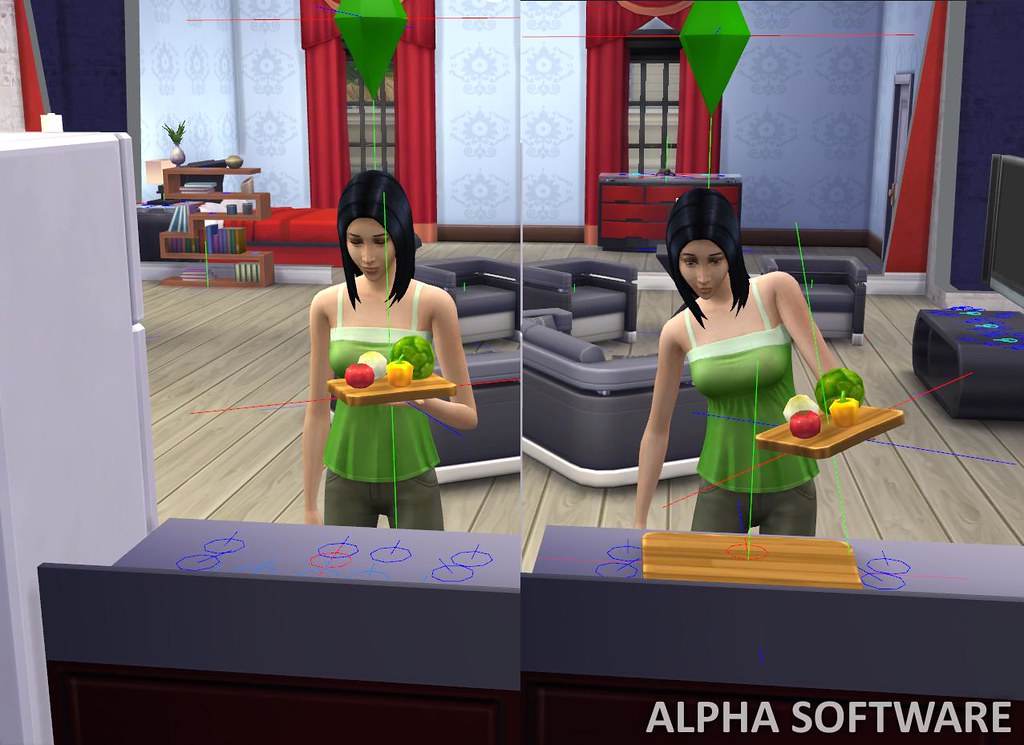 It looks plain ugly. I hope it's polished when the game's released.
Just call me Nikel
nesiocesse78

The plumbob wont look bad at all. It will shine. In that picture it is all about the way they programmed sims, I dont think it is the way we'll have it. And if so, I think it still looks good to be honest. Here another picture showing a shiny plumbie! So I think it looks GREAT !

It seems that the look and eyes of the Sims 3 is the most expressionless of all generations...
I used believe in six impossible things before breakfast.
xtinamadeinxina

Your comment has made me ask myself the same questions I asked myself ago time.
Many details ...
Will we have food, music and favorite color?
Alcoholic lady made ​​me laugh, she was called in Spain Bonehilda: http://img1.wikia.nocookie.net/__cb.../Bonehilda3.png
I would like to see her in TS4.
With regard to private school, I liked when in TS2 the director of the private school came home to assess the family.
I used believe in six impossible things before breakfast.
Honeywell Regarding the artwork and neighborhood speculation. The three neighborhoods thing was just me trying to match up the concept art in his portfolio to anything we already had on the game. Besides the Riviera themed art I don't think the connection is very strong.

PURE SPECULATION:
There's actually more support for the idea of the game shipping with 3 worlds even without the unconfirmed concept art though. A picture from Gamespy with the caption "A house in one of three environments shipping at launch." Later, you'll notice in this tweet the Sims team asking what we think ENV stands for -- environment seemed to be the consensus. Which makes it sound like instead of neighborhoods and worlds we'll have "environments" for The Sims 4 just like the caption on the photo.

"Experience three worlds with a moderate amount of lots, where you have a quick initial load time, and have short loading screens when traveling within the world between lots." That quote is from one of the first reported Sims 4 surveys. --Neighborhood Speculation

If we don't get 3 worlds at launch I'm sure the other worlds will turn up for sale shortly after.

Honeywell's Sims 4 News <--So I can find this post later if I want to.

ETA: Did I imagine someone asking how many worlds the game was shipping with? I spent a half an hour typing/linking all that up thinking I was answering someones question but don't see it now.

No Honeywell, you didn't imagine it. Someone did ask, and I believe I answered the same question earlier, but not in the concise and detailed way you did, lol.. Thanks for all of that info; nice to see it again. It would be great if the game did ship with three environments/worlds/neighbourhoods/a-random-hovel-where-Sims-live; that would give us players more choice of where we'd like our TS4 experience to start. If I remember correctly, the base of TS3 came with only Sunset Valley, and Riverview was online - or something? My memory is awful...

Also, if they do decide to release a world creation tool, then make it more bloody accessible! I tried my hand at CAW at least seven times, but gave up in the end by uninstalling the damn program while cursing it in a strange tongue; it made me so frustrated!! If they've made Build Mode & CAS in TS4 more user-friendly, then here's hoping that any world/environment tool is the same - I'd like to create my own neighbourhoods again like I did in TS2 using SimCity 4 (ah, the good ole days...)
...Titanium white...
ZenGarden

I'm a bit sceptical, just look at the concept art:

It looks stunning, amazing - and that is the problem. Are we really going to get all of this in just one basegame? After the previous basegame (TS3) that was just pure screaming for expansion packs lacking of content?
I don't want to be negative, I actually believe in the fact that TS4 is going to be great, but this concept art is just giving me a fear that they are going to screw up.

Then again, concept art is never close to what actually ends up in the game. Look at this concept art for TS3 Pets, Appaloosa Plains looks nothing like this. Quote:
While I'm not going gag over the renders like some, that doesn't mean I don't get where they're coming from. Just because people are excited about the game, doesn't mean they're ignoring the issues with marketing and the game as a whole. A few are, but those people would have bought the game anyway. If the game play is shit, then we'll be right back to where we were. Also, if the people EA were listening to are from this forum, then the sims 3 would have been much better. There is no harm in being excited for something, that doesn't mean shit for sales at the end of the day. I just think you should give those excited a break. God knows EA hasn't. And don't blame the fans for the franchise being in the condition it is now. That whole "speak with your wallet" myth on works in very specific situation. Most times the company would have know idea why the product wasn't selling and is more likely to fuck up something you do like then something you don't.
Honeywell

And we're on the same page with wanting a choice of neighborhoods and accessible tools to create our own. All I see on Twitter is people complaining of losing everything because of CAW crashes so whatever they give us I hope it's stable. I still can't believe the game is only four months out and we still don't have a clue about these basic, basic things yet. Hopefully the video on Wednesday shows the world and gives us some clue what they've done with it and they follow that up at E3.
YouTube | Tumblr(s) | Twitter
PanAm

For me the things for hoods I want for Sims 4 is three worlds each a bit different. How so? This way: I'd love a a hood when Old Town just started with Goths just coming to it with other notable families added (I don't want another world different from other series *cough* Sunset Valley *cough*), for other worlds I would let them surprise me however I want my Pleasantview/Old Town feel back because Sunset Valley was just too different (for me) from others. When looking at roads in Old Town and Pleasantview you can see similarity. Please EA, please give us back the true Pleasantview/Old Town and you chose in what time it is situated. (I believe it will be somewhere when Bella and Mortimer were newlyweds and just moved to the new home in Old Town)

Just my opinion so don't be so harsh on the disagrees. *Emerald Out*

*EDIT* Also as most said, give us the old hood building way, CaW was a mess.
Back to top