Quote:
I kind of liked the variation of light and dark in TS3. Or maybe I'm too just used to it by now. For example this image? *heavy breathing* I love scenes like this in TS3 lol. images from http://simsontherope.tumblr.com/ (he's also done some TS4 cas mods)
I like the brightness level in these TS4 shots, but the scene looks flat. Like there aren't enough shadows in the corners, nooks, crevices, etc.

If I play TS4 for any length of time then the gamma setting will probably be lowered in my video card settings. But you can also turn the gamma up on your video card settings to get a brighter look indoors. Unfortunately if you pan the camera to the outdoors it may burn your retinas from the mega bloom on steroids.

Edit: Here's a TS3 screenshot where the gamma (on video card settings I guess) is turned up more: 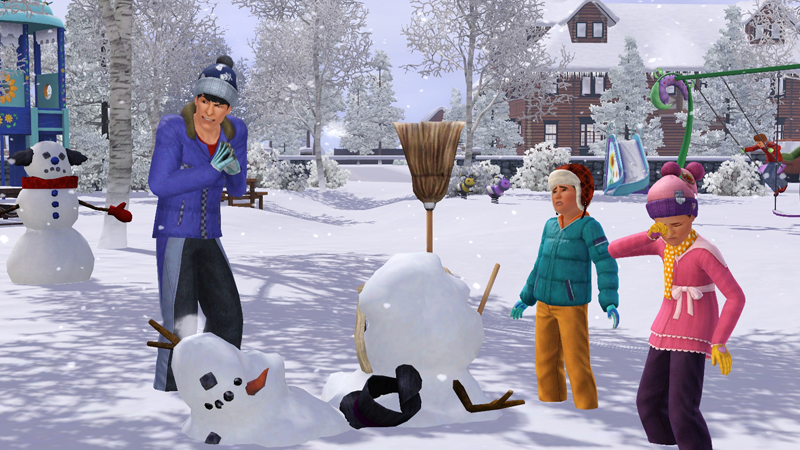 ) for when using the showers and tubs? And those who want to see their sims really naked, all that would be needed was a invisible recolor of that wear...
rodrigues

Right? How does that sort of thing happen in an AAA game?

Regardless of the questionable "artist direction" they took, some of the hair textures are just plain bad quality; you can't really say it's an style decision, because they don't quite match the other textures.

I fail to understand if they need fans to point that out for them as well, because unless they are blind - which, would actually explain a lot - it's right there for them to see.

I wonder if Graham can shed some light on whether that's something that will get fixed when the game ships, at least to make them look consistent with the others. As of now, it looks like some of the textures were made by a person using an old, out of date tool, but they didn't bother to scrap the job once they realized that. It literally looks like one of the earlier custom content made by people who couldn't yet figure out the code.

Actually, seeing how different the demo is from the final game is something I'm interesting in hearing about. I've been wondering how finished the CAS demo is; I would say almost finished - but thinking about how far some annoyances made through, like how zooming in only leads you to the face, still makes me really surprised, for some reason.
Arisuka

The good news is, that lighting can totally be modded the heck out of. The bad news is, there would need to be some skilled modder who'd actually bother to do that for this visually very 2004 looking game with lackluster gameplay...
alexspoom11
Test Subject
#15257

Why do all the rooms look so dark? It's like they added way too much light outside, and way too little light inside. Smh.
DrChillgood

Quote:
The last time they tried that, it was called the "Never Nude" trait. We all know how popular that was.

Should be a toggle just like many other options.
1/8/2016: New avatar! Pre-censored for EA's approval.
3/19/2015: Teens are too close to YAs. EA needs to either shorten the teens, or add preteens and make YAs look older.
Shimrod101

It's impossible to tell from looking at these DATA tuning files, but I presume that this can happen yes. I would think that when you go to the Gym and that Park is closed down, the sleeper_park sim has to be placed in low autonomy or uninstatiated or something along these lines and it would be simpler for the game to grab some new Townie from the Townie Pool instead of pushing sleeper_park to this new place immediately. I think also the neighbors living in houses can probably be selected for these Job Situations as well as the homeless Townie sims, so there should be plenty of sims to fill these situation roles.
MedievalMods and Sims3mods: Dive Cave Reset Fix, Resort Revamp, Industrial Oven Revamp, Will O' Wisp fix, UI Sounds Disabled, No Cars, Gnome Family Planner, Townies Out on the Town, No Martial Arts Clothes, Fast Skilling, etc. http://simsasylum.com/tfm/
lumialover8

I guess they win the ugly challenge, then.
♥ }i{ Monarch of the Receptacle Refugees }i{ ♥
AstraAlvina

Wow. Just... wow. It even made me forget about my growing wisdom tooth for a sec.
matrix54

~ Just a click a day is nothing short of helpful! ~
~MadameButterfly~

Still thinking about those distorted sims. Could you imagine if this game was still multi-player? I imagine on the day I finally decided to get the game, I would find one of those guys chasing after me as soon as I logged in.
♥ }i{ Monarch of the Receptacle Refugees }i{ ♥
maxon

Quote:
Oh, I have one of those IRL. I had to ask my best friend whether it was too chavvy for words. (It is, but it's a very comfortable tub).

It still wouldn't fit one of those sims though. Morty and Bella look like they grew old and fat together.
I no longer come over to MTS very often but if you would like to ask me a question then you can find me on tumblr or my own site tflc. TFLC has an archive of all my CC downloads.
I'm here on tumblr and my site, tflc
OrokanaruOtouto

I do this on Second Life, it's fun, tactile.
Mumty Seriously, what even is this bathroom? Tiny corner bath with a mat (you know, in case the carpet gets wet

), big huge football pitch sized emptiness and a dingy toilet and sink stuck on top of eachother and WHAT FUCKING BATHROOM IS CARPETED?

Random thoughts: I know it's hard for a team of game designers and devs to create a game that everyone would want to play. But at this point it feels like a game a lot of us *don't* want to play at all (speaking for myself, anyway).

I'm wondering where the bad decisions came from and if it could be pinned 100% on restricted time, instead of terrible decisions from some shoddy statistics they gathered somewhere. I mean. There had to be *someone* *somewhere* on that team that said "I think we're cutting too many features out".

Anywho, again I offer nothing in return. Just my inner monologue. The more I read what they're doing with this game the more I get numbed. Thanks a lot, EACare.

Mumty I'm pretty sure that's just a quick test of build tools by some Sim Camper, who quickly put together some house.
Mumty

Just to clarify, these screens have been edited, especially for contrasts, and I also use a lighting mod.

But yep, i'm agree about the lack of shadows on the interior screenshots. We just have to wait for a sims 4 lighting mod !

And thanks lumialover for the body hair, they look nice in the CAS.

Finished a ligher version of the body hair.. I tried doing different colours/combinations but it all ended up crashing

so unfortunately there's only one style, the full body, and it's black. To me creating a sim has become into picking a preset and tweaking it a bit since the game doesn't allow you to do much with some presets
In sims 3 we had pudding sims, in sims 4 we have the same prettyface, well, at lest it's not pudding
Monsoon

Stuff by me on MTS