These two here are Gabriel & Lynn Kemp. Gabriel is a sad adult, working at a dead end pencil pushing job while he wishes to go back to his youth. Lynn holds her past close to her heart as well, but, unlike Gabriel, she doesn't make much of a scene about it. As in love with each other they may be, they've both had their own affairs; Gabriel with a call-girl in my mini Quebec, and Lynn with a mutual friend of theirs (you might get to see him at some point here with his own wife once I take enough pics.)

Here they are at their wedding

... They certainly did not waste any time! 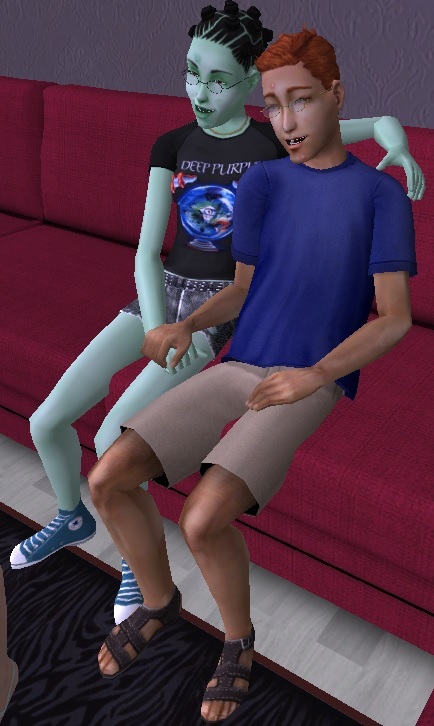 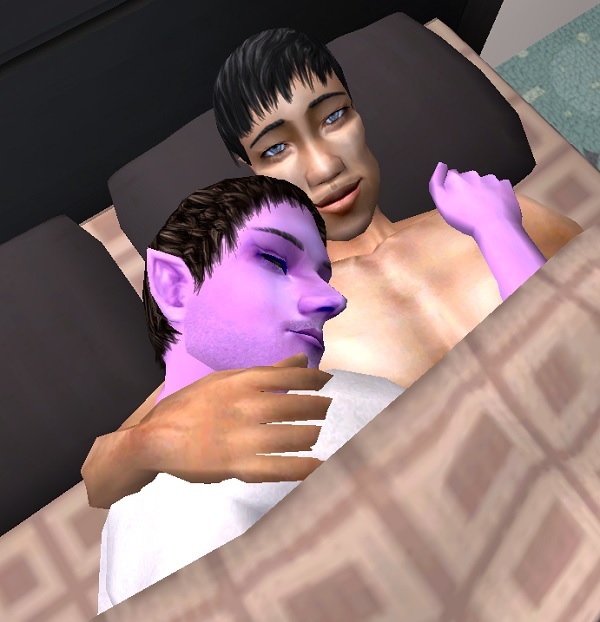 I missed their impromptu wedding at the park, but I tried to snap some pics when they got home. This was my first time toying with poseboxes and it was completely annoying and took me way too long but oh well. This was my best shot! Newlyweds Lynn and Nomi Chai! (Lynn is actually a tweaked Marvelann alien sim. I just altered the eyes so they weren't at such a severe upward slant-she was, after all, made into a human. And Nomi is a slyndsey sim!)

One of my best shots of a couple must be this one. I don't take photos of couples very often haha.
Simmers Never Sleep.
lilyeverlasting

Samantha Kinde and Emmett Strong get a bit carried away for a "see ya honey I'm off to work!" kiss! But that's never a bad thing.

Elsewhere, Penny Weiss and Lilith's Maggie (Maggie tealeaf in my game. I don't know where Tealeaf came from. She was green. And I was drinking tea) crash their mutual friends' spontaneous park wedding! They're not quite in a relationship yet, but are definitely tiptoeing around it. They slow danced with each other after the new brides' happy 'I do's!' I thought Penny's expressions were incredibly adorable and I'm obsessed with her face right now so: (in case anyone wonders, I did tweak her slightly. I gave her eyebrows. And widened her jaw just enough to stop her mouth glitching with certain expressions)

Almeric (olr Aldric? They've only recently made their way into my game and I forget) Davis and Georgia Newson, who will be following him into uni in the next rotation or so.

Newlyweds Malcolm Landgraab and Jodie Larson-Landgraab - they are getting on pretty well thus far (first rotation of their home). Malcolm is busy as ever with work, but not so much so that he doesn't leave enough time to spend with Jodie...who is currently working on her first novel.

Daniel posing for a portrait with his 3rd (and hopefully, no definitely, final) wife, Kajsa.

For das shippers. You know who you are.

Viktor & Tina spending their quality time hugging on the couch: Salvatore & Seychelle
Salvatore is my Mr. February ' and Seychelle is the mysterious woman in red. This couple recently had natural twins and moved back in with her parents since their family outgrew their downtown apartment, but I've enjoyed watching them together. They have known each other since they were kids but really didn't get romantic with each other until University.

Although Zak still loves his wife, Sue, he wonders if she has any inkling that he's been flirting with the next door neighbour.

Aged back to adults Herbert and Faith Goodie.

My Sims Xavior and Candy enjoying the love tub.
"Oh look, my grandchild is now an elder. They grow up so fast. Gee, I wonder when I'll finally graduate college." Sims 2
PenelopeT

Gilbert Jacquet and his girlfriend Melody Tinker are the sweetest couple. These two really enjoy spending time with one another (that cannot be said for some of the couples in their neighborhood

Ajay and Lola Loner spend some time relaxing outside in their pjs and talking about their incoming baby. Shortly after this picture was taken Lola gave birth to a little green baby girl, Cassiopeia

While visiting home for the holidays , the Cosgrove kids brought along their significant others. Fun fact: the Cosgrove Kids are now all romantically involved with Calhoun Kids. It was kind of hard not to fall in love with each other when their parents are as thick as thieves and may or may not have been plotting to get their children hooked up before they were born. Jimmy Calhoun and Mira Cosgrove, both the eldest of their respected families were the last to get together but the first to get engaged , after resisting years of hints from their mothers that they already 'hung out too much' anyway and 'should just get married'. Jimmy found some mistletoe and took full advantage of it. Melinda Cosgrove and Marty Calhoun were the first of the siblings to get attracted to each other after puberty, dated throughout high school and can't keep their hands off each other . Marty proposed to Melinda at this holiday party and she enthusiastically accepted. They had always talked about getting married and Marty was even her pretend husband when they played house when they were kids, but she was surprised he did it in front of their families! Marshall accepted his fate eventually and asked Charlotte out when they were teens. She was nice, pretty, and someone he considered a friend. She always had a crush on him and they went on a few dates in high school, as well as a few in his hot tub. . Since he was older, he went to Uni before her and she dated other guys which made him realize just how much he missed her, and he appreciates her a whole lot more now that she's in Uni too.

Charlotte has a twin named Charlie but he's out of luck since there aren't any more Cosgrove Offspring to hook up with. But he's okay with that. He's found some love with Amelia Wellington, a fellow twin and stargazing enthusiast.

Martha Goth and Philip Capp have been best friends since they were very young. They met at one of the Tricou rich family parties. Martha is the daughter of Mortimer Goth and Dina Caliente, though was raised by Cassandra after Mortimer passed away as Dina had remarried. Philip Capp never knew his father, Romeo Monty, though his mother Juliette had an arranged marriage to Orion Tricou just before he was born.
On Martha's birthday, she asked Phillip out on a date - they had their first kiss and instantly fell in love (causing an instant dream date)

Herb and Coral Oldie. Herb died a few rotations before Coral. It was really sad, the rotation before her death, she gave away her 2 cats (Charles went to Lilith, Eaf went to Geoff & Coraline (Mary-Sue and Daniel's 3rd and 4th child)) and her puppy Freddy was given to Angela's daughter Bea. Charles ended up running away though

These guys... just... aww... I can't wait for her to pop so I can take some family pics...
I ramble a lot, and get confused easily, so my apologies to you in advance.
DezzyDoesThings

I may have paired these together at some point lol "Oh look, my grandchild is now an elder. They grow up so fast. Gee, I wonder when I'll finally graduate college." Sims 2
DezzyDoesThings
Scholar
DELETED POST
30th Oct 2015 at 5:33 AM Fred's an uncontrollable (ISBI Sim), and ages a lot faster than his wife, but they still have eyes only for each other.
The Starblo0m Travecy! The wurst legracy evar wroted. Now with 100% more Dumbledore. Alice and Ben. I feel a bit bad for the stuff I've had these two go through, so I thought that they deserved a bit of happiness. Alice is Lora and Fred's daughter. Ethan and Adana. She is meant to be an adult character - probably close to 100 years old - she's just very short. The Magpie UGLACY - Origins of the epic hag-nose!
Back to top