Thank you.
"Fear not little flock, for it hath pleased your Father to give you a kingdom". Luke 12:32 Chris Hatch's family friendly files archived on SFS: http://www.modthesims.info/showthread.php?t=603534 . Bulbizarre's website: https://archiveofourown.org/users/C...CoveredPortals/
EwinkaSiminka
Test Subject
#228

Which alternate pregnancy controller should I download to make my elder sim pregnant?
4Fun2Old
Test Subject
#229

Hope someone here can help.
I search a file to make DMA Worker Set compatible with A&N or T&A.
In the Documentation of the EP´s say this:
"For DMA sims items A&N contains extended compatibility, DMA sims uses the same NPC value for all of their NPCs which is what enables A&N to extend support for them. However you will need to download and use the files in T&A-DMAfix.zip, Without it DMA sims will damage your sim's faith and A&N may harm the NPCs from the DMA sims set."
I try with google to find the file but still no luck.

My hope is that someone here has T&A-DMAfix.zip downloaded from BAS,
before i write a PM to @Chris Hatch.
Chris Hatch
Inventor
#230

You should already have it, you should find it in the Downloads tab of the documentation. For about a year before BAS closed we knew Victor was planning to close the site so I began to include all of the support files in with T&A and A&N.

If you don't/can't find it let me know and I'll upload it separately for you.
bulbash
Lab Assistant
#231

Do these mods generate universal NPCs so that it wouldn't be safe for an active neighborhood to remove them?
Chris Hatch
Inventor
#232

Just started using the Community Time plugin for the global sculpture, and I've found that when my sims go to community lots with their pets, the pets' motives decrease while they're off lot although the humans' motives don't. Am I the only one who has had this problem?
Kulo Seeri - Home of the Nuidya Tribe
"Not SimNation and Proud"
shastakiss
Field Researcher

Does anyone know where I could please find Chris Hatch's Store Items for Any EP? Mainly just the Spooky set but it would be nice to link to the other collections in the GoS thread I maintain. Any help is appreciated, thank you

Any help is appreciated, thank you.
Chris Hatch
Inventor
#237

I have them all on box.net but according to this rule http://www.modthesims.info/showthread.php?t=340413 giving the links to them here is a no-no.
shastakiss
Field Researcher

Oh right, I see now I shouldn't have even asked. I'm sorry.
Meduza

I was looking to add some new mods to my folder today, one of them being Chris' subway mod, but I didn't have the instructions. Or at least, I thought I didn't--I eventually found it in a big faq list with several mods detailed. Anyway, when searching for instructions, I noticed the subway wasn't on the main list. Do you have that file @smorbie1? Perhaps it's listed with something else? Otherwise I have the file and some recolors, if you need.

I also was hoping if someone knew if Chris has stopped hosting things on Mamba City--I don't see anything up over there any more.
"May the sunlight find you, thy days be long, thy winters kind, thy roots be strong." -Grand Oak Tree, DAO

TheGlobe-Intructions.zip (1.1 Mb) Includes instructions and links to the various files.

I'm not interested in Mamba City anymore, one of the admin there and I are never going to get along.
Phantomknight

That's exactly what I have; everything makes a bit more sense now. Thanks, Chris!
"May the sunlight find you, thy days be long, thy winters kind, thy roots be strong." -Grand Oak Tree, DAO

Well their loss is our gain

We're glad you have decide to give MTS more of your time. There is also the adult sister site for your ummm... other mods :P
MOOKIEBLAYLOCK

Agrees with Cali on all they said

There are a few non adult things that I've had zero luck in tracking down since returning to the game a few months back. There were NPC summoning sculptures that were perfect for adding storytelling possibilities to the game . These may have been hosted on SimValley ( or whatever the non adult sister site of BAS was called). There was a maids van to summon a maid, a police car to summon a cop and a sink that summoned a burglar for sure, there may have been others also. In my old game I had a pool hall on an unowned comm. lot with a few maid vans plunked ouside , so if you took your sim to shoot pool there was always Kaylynn Langerak (or some other maids) hustling games of pool. I used the police vehicles and sinks to set up a police station. I also sometimes used the police cars to create a 24/7 presence at high crime spots, like the convenience store pictured here. 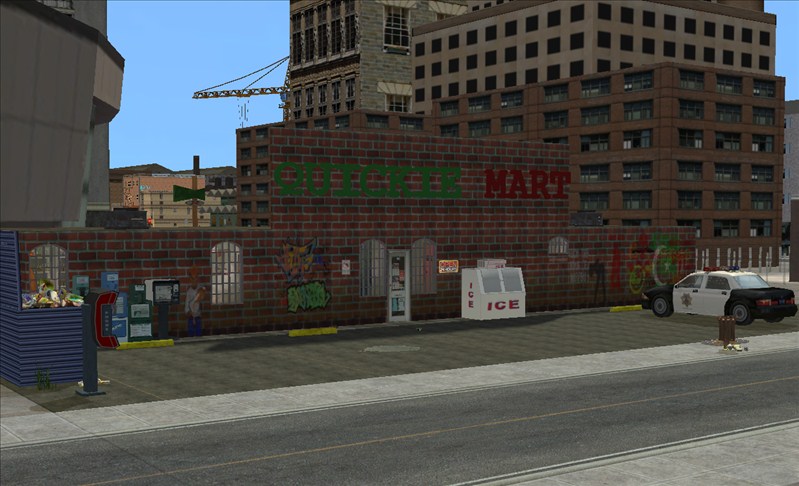 I'd really love to be able to use those in my game again.

The other item(s) I've had no luck finding were mesh and texture packs that worked for most/all of the BSOK'd body types. I use a bunch of Warlokk's shapes and some other custom body types and those were a great space saver in that the textures were multi purpose and eliminated the need to have say, 46 different Rio meshes and 175 items of Rio clothing to complete a wardrobe. I hesitated to mention this as a small portion, but far from most , of the clothing is revealing. The general concept , at least to me, isn't adult in nature at all. I have no idea if any of that was available at Mamba City as I've never been able to register there. I'd love to be able to use those in my game again as well and totally understand that links posted here for the texture pack(s) etc might violate site rules, which is something I'd never want to do. I like it here

Thanks for any and all help !
Shotgunning bland cucumbers since 1974
Chris Hatch
Inventor
#245

CarsAsSculptures.zip (6.7 kB). These now have an extended footprint so sims don't walk through them anymore. Note the CJH_PrisonSink.package will place a burglar at the sink so you can place it in a cell at your police station.
I do have a default texture replacement for the police car since you will now be seeing it more often, Default-CopCarTexture.zip (146.5 kB)
Phantomknight

I wonder though; are the drivers and social worker okay to summon? I thought they were unsafe npcs? Or are they only unsafe if you add to the household, but they're okay to summon?
"May the sunlight find you, thy days be long, thy winters kind, thy roots be strong." -Grand Oak Tree, DAO

I was under the impression that if you didn't interact with them the games didn't intend and didn't add them to the household, it'd be fine. I occasionally use Inge's teleporter to summon Crumplebottom to a residential lot during wild parties.
I'm secretly a Bulbasaur. | Formerly known as ihatemandatoryregister

Yes, any sim that has a real character file is safe to interact with. When a social worker come's to your sim's home her entire action is pushed on her from her car, away from her car she is just a normal sim. Driver NPCs have no interaction options on their pie menu, therefore when the taxi or school bus sculpture bring one in it overrides their pie menu to enable them to be interacted/socialized with.
TadOlson

I have most of the files downloaded though the globe instruction ended up requiring a free MHTML reader besides a browser as IE was the only one to open and read the file.It meant running a huge search for free programs capable of opeing that type of file offline without a browser.
TadOlson's Blog
Phantomknight

Thanks for clarifying, Chris! I think this could be a cool way to bring my community lots to life so it's nice to know I don't have to worry so much.
"May the sunlight find you, thy days be long, thy winters kind, thy roots be strong." -Grand Oak Tree, DAO

XPTL Mod Archive | Change a Mod's Mesh into a CC Object | Increasing the Game Difficulty | Editing ACR 4 Your Age Mod
Bored? Read an unfinished legacy or sim story. | Kelyns on other forums
Back to top