I just found Buggybooz's website. The Buggybooz folder in my Downloads now has an awful lot of files in it..... :-)
- My TS2 Victorian-Themed Pinterest Resource Boards -
justJones

I don't frequent many blogs or really any cc sites except here, so this contest has been great for me. Really should have checked out BuggyBooz blog way sooner though concsdering I have most of her stuff from here. lol
GlorianaGlowbee

I was going to say, the Nooks and Niches sets really are just unbelievably awesome. I was hesitant about adding it too, I'm always afraid of breaking the crap out of my game with too much CC. I took the plunge though, and once I started playing around with all the pieces on a practice lot, I never looked back. I did wind up yanking out a bunch of CC to ease my mind, I agonized a little but I think it's one of those sets that is completely worth the sacrifice because of how versatile it is.

EDIT: I didn't even realize Liv's columns were the Buggybooz ones! I downloaded some stone columns and arch thingies from the Sims 2 smithy site, I think they were conversions from Skyrim or Oblivion, I thought they came from that set!
"Nobody in life gets exactly what they thought they were going to get, but if you work really hard, and you're kind, amazing things will happen. I'm telling you, amazing things will happen" --Conan O'Brien
Phaenoh

Quote:
Seriously? I have that stuff pack and I've never seen that lamp before.


Quote:
Nevermind, I double checked it and I'm just crazy.


Quote:
That's all I've been able to do, and I'm pretty sure I have it all figured out.

Assuming we aren't doing duplicate houses (like another of these awful beachy modern things) then there really are only 5 or 6 houses for jones to pick the 5 houses from (app and 4 rounds). There are more empty houses than that, but staying inside the lowest budget of $40k reduces that number further.
New! Fully Renovated Pleasantview!
Like my work? Help me make a difference!
justJones

joandsarah and Phae, I'm interested to see if you guys get them right, so let me know

Thanks for the feedback! It was super helpful

I want to go back and change this entry, but I think i'll leave it as is otherwise I'll over think it haha.
joandsarah77

Phaenoh, I figured the same-that there would be no more beachy modern houses which only leaves so many. I'm fairly sure one larger one I noticed will be included which is why I chose the Jones family for this round as I think this is the smallest house that jones has chosen. Of course I could be terribly wrong.

jones, I will have to take note of what each house is called.
"I dream of a better tomorrow, where chickens can cross the road and not be questioned about their motives." - Unknown
~Call me Jo~
Careers and businesses for sims
What I Love About Toddlers
esmeiolanthe

I notice that the roof of this house is (for some reason) made of the same slanted wood decking material as the actual deck. Can we change that to some other roofing material?

And can we change the flooring on the deck, say to a different wood, or to a stone or something?
esmeiolanthe's Live Journal and Tumblr
Most recent story update: Fuchs That! on 2/21/15
joandsarah77

I think we all did Esme. I changed mine to brown stone.
"I dream of a better tomorrow, where chickens can cross the road and not be questioned about their motives." - Unknown
~Call me Jo~
Careers and businesses for sims
What I Love About Toddlers
justJones

You can always change the roof texture, flat or pitched

Same for decking and foundation.
Lucia940 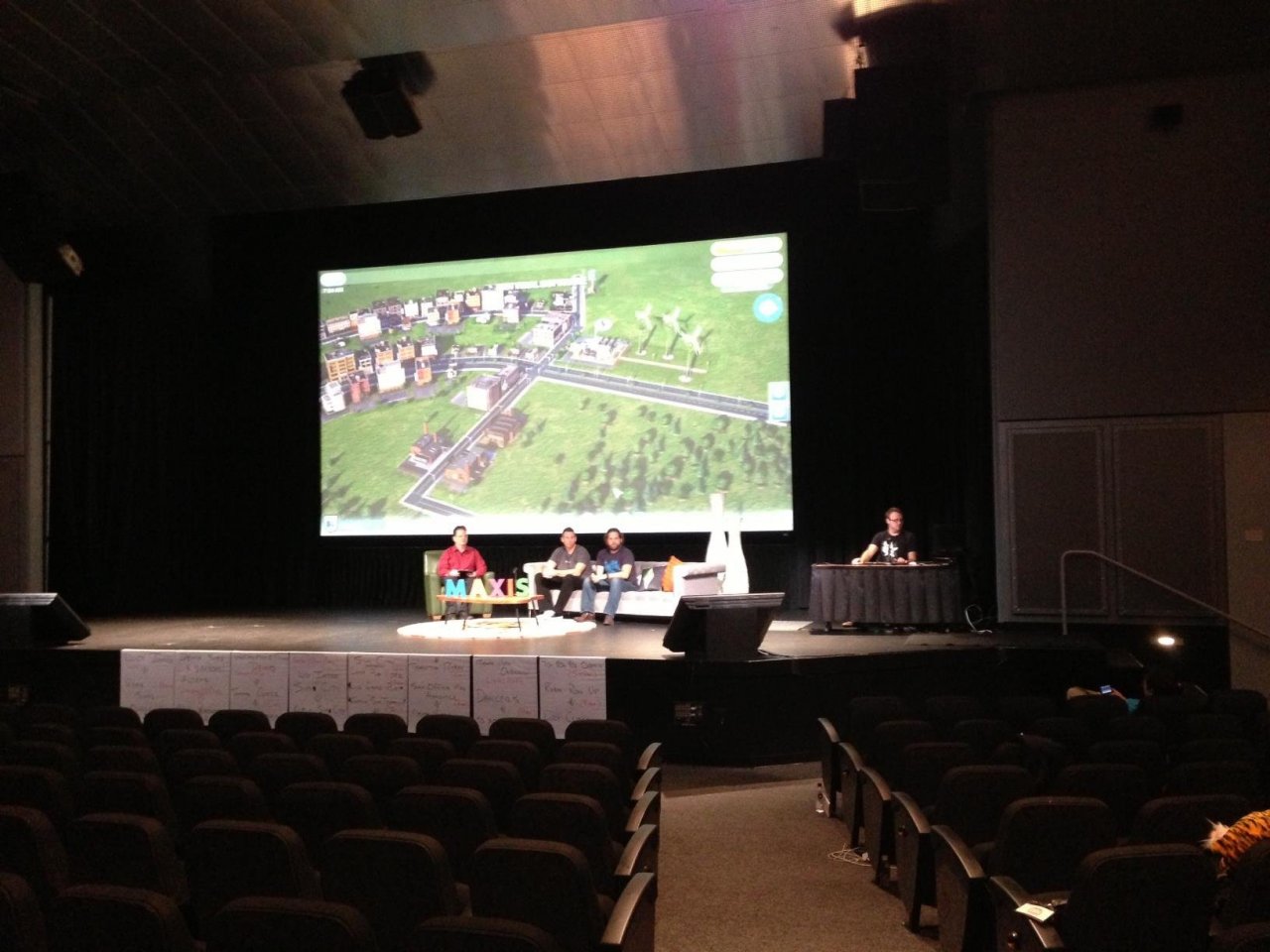 EDIT: I need to retract my statement that Maxis is all men. It was brought to my attention that women work there too. However..... I will not retract my no common sense statement. Maxis did a horrible job on the homes in Sims 2. Be they men, women or both. Men is however all I saw for Sim City 5. The links are below. Also some very interesting info on Maxis. They are owned by EA and they had nothing to do with TS3. They did however bring us Sims 1 & 2.

EDIT: For the curious and those who would find this information useful:

The face book page has them sitting down and talking. You can see what I saw. There were no women. I am sure women work for them, but when Maxis showed up here, it was men only. I am certain there were women who worked on sims 1 & 2 and sim city games, but all that showed up here were gentlemen.

Maxis was not involved in any part of Sims 3 as they were working on Spore. It tells you this in the wikipedia on Maxis. URL above.

Maxis is a sub-division of EA. They are a California based company. Perhaps those seeking employment should apply to EA and not Maxis since Maxis is owned by EA and have been since 1997. Wiki: Electronic Arts (EA) completed its acquisition of Maxis on July 28, 1997. When EA purchased Maxis, they also purchased the rights to the sims. Will Wright, co founder of Maxis, created the sims.
Phaenoh

I'm fairly sure that Sim City is at a different studio location than the Sims 2 and 3 team. I've applied to Maxis as a Concept Artist for Sims and I'm waiting to hear back. I do know that they do have women on their team.

New! Fully Renovated Pleasantview!
Like my work? Help me make a difference!
GlorianaGlowbee

I don't think ALL dudes are bad at making functional houses, some of the best lots I've seen were done up by the fellas. I think CERTAIN dudes are bad at it (and maybe a bunch of them work at Maxis, haha).

My other half is one of those dudes. He's not an avid simmer by any stretch, he just played it because a former roommate left it installed on a computer he still had. He just started playing with it for the hell of it. When we were first hanging out, he told me he had played and so naturally I wanted to see his sims and his houses.

Seriously, they were all straight squares with stuff randomly crammed into them, but all of them had the big screen television. Ugliest random wallpapers, all the doors and windows were the ones that show up first in the catalog, and one of them didn't even have an actual bathroom, just a toilet and shower plonked down in the corner. It was like a blind man on crack had gone wild.

I don't think all guys are bad at building houses, just those who work for Maxis. lol
Croutonian

Not nice to notice my spelling errors

Especially in a picture I'm not even going to bother to fix, lol.
MAB-2000

Round1 - Entry
Finally..., I've taken the pictures! Hope I didn't make the same mistakes as in the application house. This house is made for Jones family, and I'm sure he'll like it.
Modern and in budget (the 40000 limit was a pain in the...cash!) Here is a small backyard to relax and let loose Since Jones is a workaholic, he will have a nice office, with lots of books, and of course a laptop. These days you can't do without a laptop. Can you imagine a businessman without a laptop? Laptops have become cliche for working people, like suits! A cozy living-room to live in. And of course a functional kitchen. How could I miss the bedroom? Don't stare at the empty selves. It's not because I had no CC decorative clothes to put on. No, no,no,...,it's because he hasn't yet moved in to place his clothes there. :D

I have a soft spot for bricks. Do you know where you got that laptop from? I've had some, but they weren't Free Time-friendly so I removed them.

By the way, just in this first round I've already download so much CC from the sites and blogs you mentioned and suggested, I bet my game will take a full hour to load by the end of this contest

I am extremely sorry for my late reply for the feedback.
I appreciate all judges for their instructions, do's and don'ts. I wil give my best go accordingly as they have suggested. And might even try something new.
Thank you.
naiyasfury
Field Researcher

This contest looks like so much fun! You guys have all done a fantastic job redecorating with the limited budget, I almost re-installed TS2 so I could participate ( haven't had TS2 installed since TS3 came out) >.> . I may actually re-install it for the second and third incarnations of this contest. Would love to have a contest like this for TS3 ^^. Anyway, just wanted to pop in and say how much fun I've had following this contest, everyone is doing so great. :D


(I hope it's ok to post in this thread, I looked through the rules for the forum and didn't find anything that said you couldn't. Of course I could be totally blind. Feel free to delete my post if it's deemed inappropriate.)
MAB-2000

Can we run them the other way if they stay in the sames tiles as originally?
justJones

Sorry, no. That would be a pretty major construction in real life, lol. I know those darned stairs are probably the biggest challenge of this house. The placement is just plain idiotic!
sharill63

Ok, thanks I was worried about that, but will just have to make do!

News flash~ maybe all of us creative people should help design some of the homes for the next Sims base and EP games. Maybe not all, but a contest would be nice to see~
Lucia940

I really hate those stairs and where they are located. I tried to ignore them when I was re-doing my house last night. They are a nightmare. I forgot how much of a pain these tiny Maxis houses really are with sideways doors and stairs going somewhere but doing it in an ugly way. lol