The Greek pantheon gets a makeover
Years ago, I made a comic that was a comical rendition of Greek myths in modern times. I decided to give my characters a makeover, starting with Melpomene, the muse of tragedy. She's always been one of my favourites, despite her whiny nature - then again, it's understandable. When your job is to inspire artists to write plays about sorrow and death, how can you manage to stay in a decent mood? And can you imagine having eternal life while always being sad? *shudder*
Her former style was very plain, she was merely a tall, thin woman with a perpetually miserable expression, and wearing a sad mask around her neck. Thalia was her very opposite, short, podgy, with a perma-grin. In this new version, Melpomene's an emo kid. I think I like her even more now, but she makes me want to give her a hug

More deities to come, of course. I'm planning on modernising most of them

Thalia, the muse of comedy! She's in charge of inspiring playwrights for whatever funny pieces they may want to write. More podgy and smiley than her sister Melpomene, of course, but somewhat immature. Just imagine someone who drops anvils on your head, banana peels under your feet, then proceeds to tell you something about your mum and add sexual innuendo. That's Thalia. Good thing it'll never get her hurt, right? Hurray for godliness. 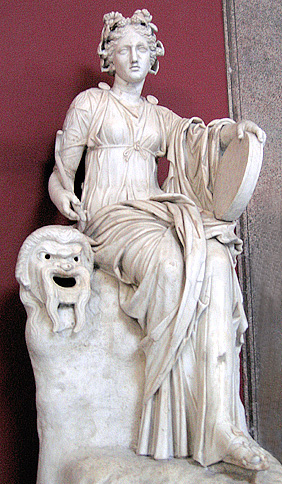 These are lovely- I'm something of a fanatic/expert about Greek history and mythology, so naturally your sketches trip my trigger. I love Thalia in particular, and I can't wait to see what you do with the Olympic pantheon.
Do I dare disturb the universe?
.
| tumblr | My TS3 Photos |
Frenchie

Ooooh, I have several more, Rabid, I just didn't feel like posting them all them at once

Aphrodite, goddess of beauty, love and sexual desire. Aphrodite was born... well, that's a bit embarrassing, really... from the scrotum of the Sky-God Ouranos after it fell into the sea after being severed by his own unborn offspring during intercourse (oh, those Greeks). She's known to have slept with countless gods, including (what a surprise) Zeus. She got married to Hephaestus, the repulsive god of fire, through a cunning scheme of his, and promptly cheated on him with the maaaaaanly god of war. Aphrodite has the unpleasant tendancy to a) shag virtually everything that moves and b) make whoever annoys her sexually deviant (she's directly responsible for the birth of the Minotaur... put two and two together).

These are really quirky and great, Good fun to read and see too!

Hephaestus, the god of fire, blacksmiths and various precious stuff you find underground (gold, gems...) was post-natally aborted by his parents, Zeus and Hera. By this, I mean they chucked him down Mt Olympus, for very shallow reasons: he was a VERY ugly baby. After falling down for nine days (someone had cast Feather Fall on him or something), he hit every branch of the ugly tree and hit the ground, making him lame for the rest of his life. However, he finally found his way back among the other Olympians by showing the talent he had developed for blacksmithing. Hephaestus forged the lightning, Zeus' weapon of choice, and designed a trapped chair to constrain his own mother until she'd get him married to the beautiful Aphrodite.

Ares, the god of war, murder, frenzy, bloodshed and general, mindless violence is one of Zeus' few legitimate sons. Unlike Athena, who covers strategic aspects of combat, Ares is more blind rage-oriented. The city that worships him the most is obviously the brutal, military Sparta.
I first designed him as a rather normal general, but after reading more about his personality, it seemed to me that the "psychopathic soldier on steroids" look would fit him more.

. If you ever decide to rework the sketch, it would be sublime if you added his Olympic throne of human flesh.
Do I dare disturb the universe?
.
| tumblr | My TS3 Photos |
KyleTheArtist

most favourite one is the emo goddess and the Eroctic musa :D

Question, how is Aphrodite involve with minotaurs? Greeks were pervs xD i find minotaur story funny. Correct me if I'm wrong:
Kind of Minos(if i remember right) Loved bulls and prayed to gods that they send him the most perfect bull for the upcoming contest. So the gods( or on of them) did, but said you must sacrifice this bull for me after the contest so I can get him back. Contest went well, and king didn't want to give bull away, cuz he liked him, so he sacrificed different bull. Gods( or god) Were angered and made kings wife fall in love with bull and...woohoo him. This minotaur was concieved...

I do so love Greek mythology, but it does get confusing. King Minos' wife Pasiphae once boasted that she was lovelier than Aphrodite, and as punishment, Aphrodite bewitched her to fall in love with King Minos' prized white bull. After Daedalus helped Pasiphae build a wooden cow in which to approach and woo the bull, Pasiphae gave birth to the Minotaur, and Daedalus later built the Cretan Labyrinth to house it.
Do I dare disturb the universe?
.
| tumblr | My TS3 Photos |
Frenchie

In the version I read, Minos had just failed to give offerings to Aphrodite for several years, so the goddess made his wife lust for bulls.
And Kyle, I knew the ancients were perverted the day I learnt about Aphrodite being born from a pair of testicles severed by unborn children and fallen into the sea. :D

And to breathe a bit of life in this thread, here is Euterpe, the muse of music, aka the metaphysical DJ from Mt Olympus.

These are really cool! Thank you for sharing! You have talent!
Ranta

Heh, these are great! I especially love Thalia and Euterpe, and Hephaestus made me laugh -in a good way, of course.

"I have hated the words and I have loved them, and I hope I have made them right."
-Markus Zusak, The Book Thief

WOW WOW WOW! I'll say that again! You already know I luff those (especially being Greek, it's awesome seeing a modern aspect of the myths) and I can't wait for the tablet to arrive and the comic to start!!

Thanks for all the nice comments, everyone

Ranta, Thalia is one of my favourites, and for some reason, I have an urge to squeeze her cheeks like I would a baby's. Squidge squidge squidge!

Another sketch for you all:

Hermes is the god of thieves, tradespeople, travellers, wit and athletics, born to Zeus and his mistress Maia. He's much of a trickster and the nasty habit to swipe everything he can, all the time; as such, he can prove annoying to many another deity. His function among the gods is that of the supreme Messenger - choosing a mythomaniac, kleptomaniac entity as a trusted courier may be a questionable decision, but you don't argue with Zeus. Whether he was playing favourites with his illegitimate son, whether said son proved reliable or whether his mischief was just endearing remains a mystery so far.

PS: I'm soon getting a graphics tablet. My style hopefully won't suffer too much from the tool changing, and it'll be much easier to colour my stuff!
Rabid

LOL at Hermes :laugh:. The winged combat boots are far superior to the winged sandals. Was it him who, as an infant, hid 100 of Apollo's prized cows and sent him into a hissy fit? I never thought of Hermes as a dirty, lowlife thief, but that's priceless. I would love to see your interpretation of Apollo.
Do I dare disturb the universe?
.
| tumblr | My TS3 Photos |
Frenchie

Quote:
Yes, he is

That's why I saw him as a kleptomaniac, stealing cattle when he was one day old or so!
longears15

These are wonderful. Thank you so much for sharing - they've really made my day Frenchie :D
Please call me Laura
"The gene pool needs more chlorine."
My Site
Frenchie

I just was in Paint.NET and with my Tablet, Wondered how hard it would be to Colourize this myself, and I got an odd effect.. I'll show you when I'm finished.. if thats Ok.
I'm still a newbie Newb at Tableting, so It *will* look basic!

(I did "Hermes" if your wondering

By all means, do show me!

And don't worry if it doesn't look all that good, if anything, I'll feel honoured somebody tried to colour my stuff!
Petchy

WELLL.. somehow it turned worse the more I did it.. *sigh*

It kinda give the effect you drew it with Colored pencils, which wasn't what I was trying to do.. In fact, I was trying to cell shade it, then go over it.. but oh well.
I tried going over with a Black Line, but It took away all the colour that was given in most parts (oddness, I know) so.. Oh well!

It was a good exersise for me anyway!

Have you given the colouring a longer shot, Petchy?

Also a few expressions I drew on the plane. I'm aware Ares' "happy" expression's eyes are too wide now, gah.

And Eris, the Discord.