The townie. The essential backbone of a Sim's interaction with the world. A townie is your Sim's first friend, first kiss, maybe even first victim. We owe a lot to the humble townie, and so we come to today's challenge- give our townie friends a make over. We all know their fashion sense is lacking after all. Those flame jeans, plaid shorts, unflattering haircuts and bizarre clothing combinations.

So, how does this work?

There are a few guidelines, though.

Of course...there's mini challenges too!
Pick from:
So what are you waiting for? Boot up your game and get making over! Have fun

Nice challenge! I'm gonna take part but have some questions.
1. Should I take only premade townies or any townie ever spawned in my game?
2. Are mini challenges optional or obligatory?
BlackjackGabbiani
Inventor
#3

So...you mean anyone in a town? Anyone pre-saved into the bin for us? Any results from going into CAS and hitting random? Or what?
Menaceman44

Quote:
Sims saved into the bin generally aren't considered Townies. Nor are Sims that you yourself randomly generate in CAS. A Townie is generally a Sim that is not housed but one that can be found wandering around the Lots in your worlds. An example off the top of my head that I can think of is Goopy Gilscarbo from TS2.
My deviantART, MTS Yearbook Origin ID = Alistu
ferckast
Test Subject
#5

This sounds like fun! I'm wondering the same thing as Influence - I really can't do without my CC.

Hi!
This will be so much fun, I'll definitely pop in regularly to see what everyone is coming up with! Maybe I'll participate, too, if I find a suitable "victim" on the streets...
I guess sliders is a no-no, too? As that would give free reins to completely change the appearance... But as townies usually are "pudding" sims, what are we allowed to alter exactly, apart from changing the hair, clothes and make-up?
Please follow The Grey Witches on my blog!
Menaceman44

Quote:
Not really. They are housed Sims that are intended to be played. The Goths aren't townies. Nor are the Roomies. They all already live in homes.
Unless SparklyPotato wants to confirm what counts as a Townie then I would assume all housed Sims that can be readily played are off limits.
My deviantART, MTS Yearbook Origin ID = Alistu
AGuyCalledPi

So usually I don't use any townies. I have a pool of people I can use for stuff, and they're much more convenient for me. But old Bridgeport is still full of premades and sometimes I make a few over for the exercise. See how I can adapt their identity to the themes I'm going for, if at all. (Usually it doesn't go very well, hence my reluctance to use any of them.)

So in 2010 I guess the whole reality TV, "mo money than sense" TMZ celebrity kinda culture is very prominent in EA's Bridgeport. These people don't dress their age and they've all had work done. I noticed that Lola Belle is probably a lot older than her outfit suggests so for her more 80s-ified look I've toned it down a little extra. I think the high-contrast hair and the stylized eyebrows are already pretty out there. I don't see her with a huge cloud of hair and everything with bangs didn't quite look right, either. Lola probably would've looked better if the original weren't so extreme.

I don't know this guy's name but he's had a fuckton of work done in 2010 and he looks like a Ken doll. That's ridiculous. I know Bridgeport anno 2010 is big on the Kardashian vibe but he's gotta be like 40, man. Now I don't know the first fucking thing about Kim, Khloe, Kris, Khloride or Bruce, but this is 1988 and I'm pretty sure their dad already had that drug kingpin vibe going on pretty well. I was going to give him a big chonking mustache but they were all slightly wrong. It's important that once in a while, you equip a man with a very bushy upper lip and nothing else.

EDIT: these people are now permanently dead. A Sim society in which townies are given the same opportunities as real Sims is not a just society. Here's some Sims, who have also totesamally had several makeovers and several weeks' worth experience as unimportant background dipshits. 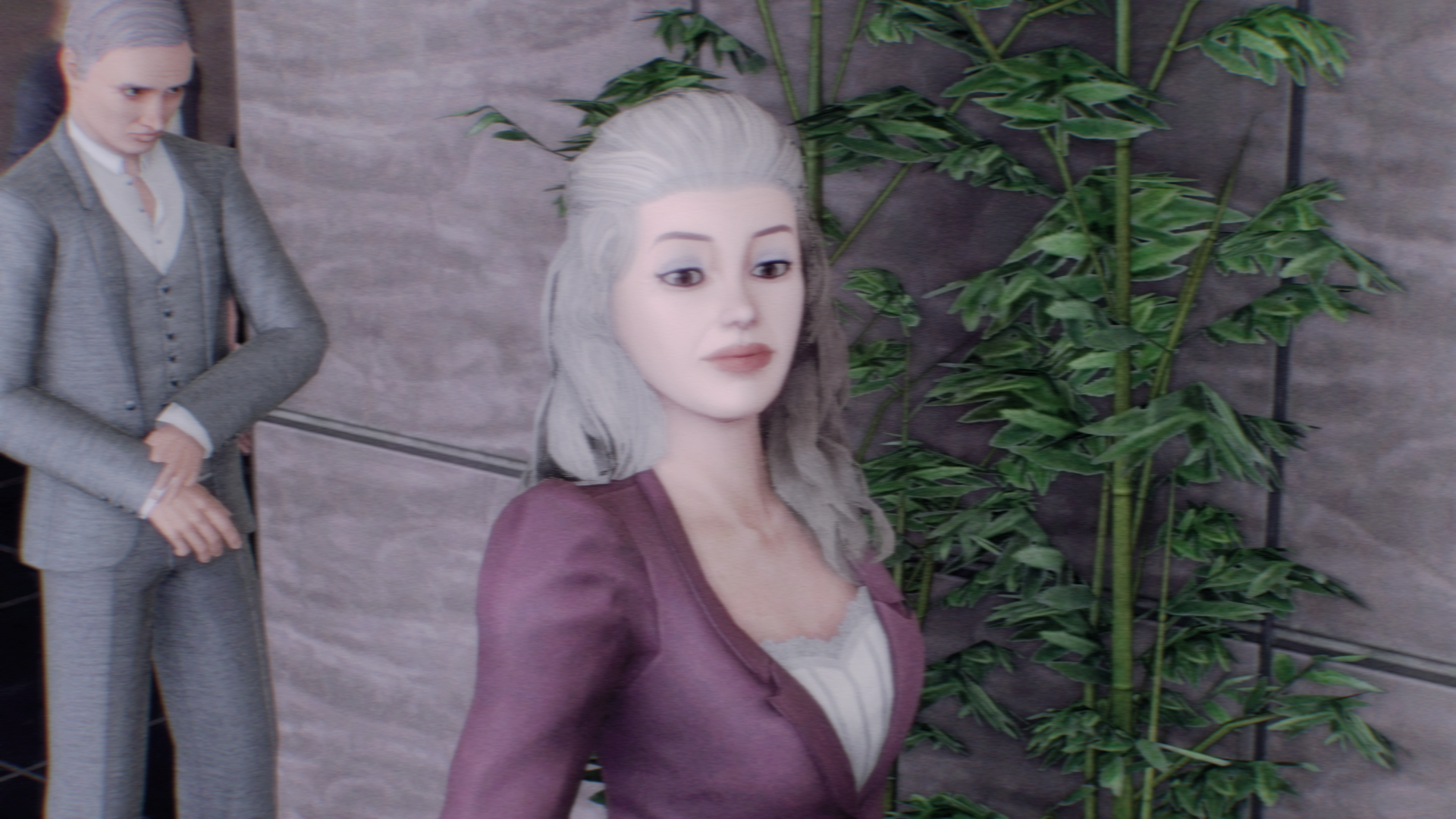 Alekszandra Wozniak, who unsurprisingly, also has a shit ton of money. But hey, at least there's more sense than money here. Whoever took this picture really phoned it in though. 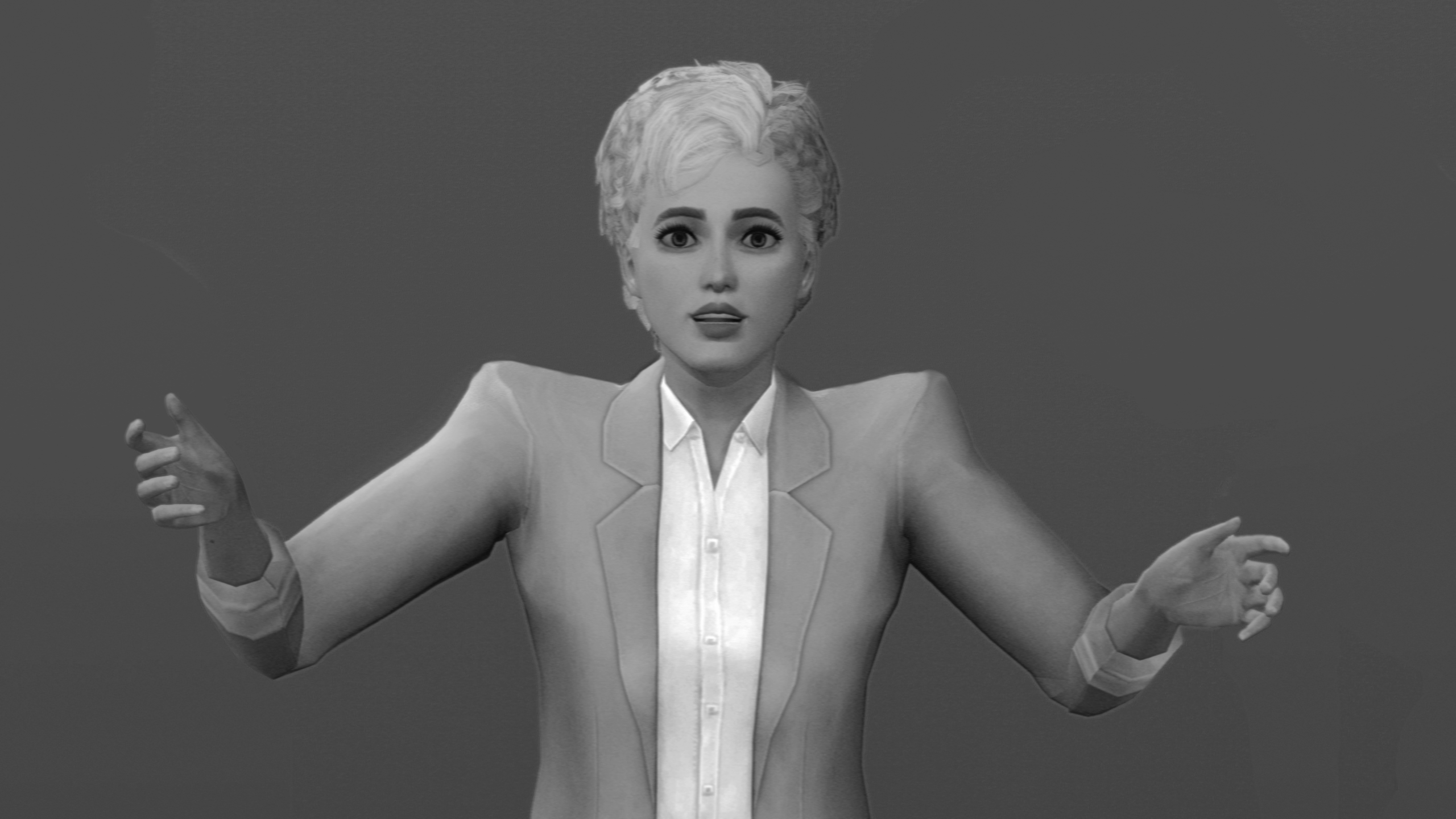 This one's called Phyllis. Can't be as rich if she's having her picture taken in black and white. It'd at least be a cool sort of black and white if that were the case. This is someone who can't even be assed to pay extra for the color film, or do a sort of glamour pose. And I don't know if that's the classic Bridgeport weather, or if this was taken in the depressionverse, but I don't like it. Hard pass.
Hypocrisy is only okay if I do it.
( Join my dumb Discord server if you're into the whole procrastination thing. But like, maybe tomorrow. )
Freya5

Nice makeovers of Kai whatever his name is and Lola Belle. Just a pity they supposedly aren't townies.
Edit: The last one is a perfect Ellen DeGeneres look-a-like!

Please follow The Grey Witches on my blog!
AGuyCalledPi

Quote:
Oh god. That makes me want to never use that hairstyle again. Anyway, here's a couple more that I managed to find:
These are actual townies, by the way, as in the dictionary definition of a townie (if there is one). They're very hard to find in my worlds, as intended, but not quite extinct.
From left to right: Jackie Whitfield, 22, Louis Grimaldi, 35, and the guy from a-ha, I guess. He's called Julian Waggoner, he's probably about 27, and he still looks like a damn pudding.

Hypocrisy is only okay if I do it.
( Join my dumb Discord server if you're into the whole procrastination thing. But like, maybe tomorrow. )
Sims2Maven
Lab Assistant
#12

I don't think I have any townies that haven't been modded in some way. Just can't stand fugly Sims in fugly clothes....
tunafishfish

That hair is reading more Madonna in the Papa Don't Preach video, to me.
tunafishfish

Per the Sims wiki, "The Sims 3 has been designed to be played with minimal switching between families, so townies are now considered any Sim that is not part of the active household. Townies can be residents of a player's base neighborhood; they can be homeless, and they can be residents of foreign neighborhoods introduced in World Adventures." (https://sims.fandom.com/wiki/Townie)
tunafishfish

Quote:
I prefer the sound of that. I can very well imagine that some of my Sim gals want to look like Madonna, in fact, Laura is pretty much a domesticated Madonna who also happens to look like the blonde from Star Trek TNG a little bit. I try to use those shorter hairstyles as much as possible, since there's no a lot of choice in longer hairstyles. There's a handful that go past the shoulders, but either they don't look '80s at all or they're just generally ugly. Now it makes perfect sense that TS3 doesn't have a whole lot of mall bangs to choose from, but it's a bit annoying nonetheless.
Hypocrisy is only okay if I do it.
( Join my dumb Discord server if you're into the whole procrastination thing. But like, maybe tomorrow. )
Sunrader

I love this concept. So many random/aged up townies look awful, so I've made a habit of making-over the more ugly ones I come across via the Ambitions Stylist menu. I'll be sure to take before and after photos of any I change before the end of the month.
redandvidya

Finally! Something I'm good at :D

Here's some wonderful iconic townies from Pleasantview! Featuring Goopy Gilscarbo and Sandy Bruty, which is arguably the best ship in the entire Sims fandom xD

Enjoy! :D
It is dangerous to store moisturizing cream in the refrigerator, as it may be mistaken for mayonnaise.
Check out my maxis match CC masterlist for The Sims 3!
I renovated Pleasantview CC-free and released it here!
And I did the same for Strangetown as well, here!
@bettiebangsagnes on tumblr
Spiderses

RE: Who is and isn't a townie. The only packs in TS4 that come with pre-made, homeless townies are Get Famous (a few celebrities) and Island Living (a few mermaids). Every other pre-made Sim lives in a house, and every other homeless townie is randomly generated. So, I think TS4 players can't really participate in this challenge.
Menaceman44

Of course we can. Take a homeless Sim that your game generated, take a before picture, then give them a makeover.
My deviantART, MTS Yearbook Origin ID = Alistu
k2m1too

So is this simply a "hair/clothes/makeup" change makeover, or is slider tweaking allowed (assuming they bear resemblance to the original)? My townie makeovers tend to get facial reconstruction surgery. lol
Duh and/or Hello!
(simblr)
grindingteeth

I'd like to know this too - as all my townies get adjusted to fit my style of sim - I try to keep them looking like themselves (sometimes) but adjusted, nonetheless.
simmysmalls

This Beetlejuice wannabe, Malcolm Harris, was scaring my neighborhood kiddies, so I made him the child friendly brave Little Toaster, but in knockoff form since Toaster is techincally a Disney character and I don't wanna be sued.
simmysmalls

Actually, that MOFO was looking too much like Beetlejuice for me to ignore, so here we go again. Knockoff Beetlejuice.
simmysmalls
Lab Assistant
DELETED POST
30th Jul 2019 at 12:43 AM

This message has been deleted by simmysmalls. Reason: L
Back to top